Signs Preceding the End of the World opens with its protagonist, Makina, telling herself, cryptically enough, that she is dead. It soon becomes clear that she is predicting a death she manages to narrowly avoid, as she watches a large sinkhole open up before her and take an old man and his dog down with it. But Makina’s opening line also points to the book’s primary intertextual reference: Makina’s journey throughout this novel follows the same structure of a journey through Mictlán, the underworld of the Mexica (Aztec) people. Each of the novel’s chapters parallels one of the nine stages that a deceased soul must take along its years-long journey to its ultimate resting place. In a sense, then, readers can take Makina’s first words—“I’m dead”—literally, for the purposes of this ancient allegory.

After Makina manages to outrun the sinkhole, she reveals the motivation behind her lengthy journey to come: her mother Cora has asked her to hand-deliver a message to her brother, who left the Village where they live a few years before to migrate north and try his luck in a country that is never named, but is clearly the United States. Before setting out on her journey, Makina visits three men, Mr. Double-U, Mr. Aitch, and Mr. Q, who are in search of assistance. While all three of these men are powerful, well-connected, and somehow involved in the local criminal underworld, all of them respect Makina because she plays a crucial function in their Village: she operates the telephone switchboard, connecting locals with faraway friends and family members, all in three languages—“latin tongue” (Spanish), the “new tongue” from the north or “anglo tongue” (English), and “native tongue” (the area’s local Indigenous language). Mr. Double-U promises to help Makina get across the border, in return for a favor Cora did for him years prior. Mr. Aitch can help Makina find her brother, but insists she carry a mysterious package across the border for him. She agrees, insisting that “you don’t stop to wonder about other people’s business.” Mr. Q promises to help Makina return home, as repayment for the important message-carrying work she has done for him in the past. The first chapter ends with Makina looking at the hall of mirrors in Mr. Q’s restaurant before versing (leaving or moving on).

In Chapter Two, “The Water Crossing,” Makina travels to the Big Chilango (Mexico City) in order to catch her bus north. She thinks about the boyfriend with whom she was wary to get too emotional, and the “little piece of land” her family may or may not own in the United States, which was her brother’s initial motivation for migrating there. Cheered on by a friend, a young man tries to grope Makina on the bus, but she grabs his finger and nearly twists it off while offering a hushed warning. During the long bus ride, she contemplates the future and the unknown world across the border, and at its end she checks into a cheap hotel full of migrants “of many tongues,” to whom she tells the little she knows about the United States. In the early morning, Makina sees a man signaling to her from across the river that separates the two countries. The man, named Chucho, brings Makina an inner-tube to cross the river, although they both fall in and he narrowly saves her from drowning. This scene symbolizes the first major test of the mythological journey to Mictlán: crossing a raging river (Apanohuaia) with the help of a Xoloitzcuintle dog.

In Chapter Three, “The Place Where the Hills Meet,” Chucho drives Makina through a desert toward “two mountains colliding in the back of beyond” (another image Herrera takes directly from the Mictlán legend). Past those mountains, there is another driver waiting for her. Makina changes quickly in a shed and notes that she is attracted to Chucho, who is busy dealing with a potential crisis outside: a heavily-armed “anglo with dark glasses” has been following them and Chucho makes a phone call to report it. Although the man initially seems to be a border control officer trying to deport Chucho and Makina, Chucho has a different idea: the man, like Chucho, is a coyote who smuggles people across the border, and he is worried about the competition. The man stops, confronts, and starts shooting at Chucho and Makina as police cars approach in the distance. Chucho manages to hold the anglo off for long enough that Makina can run away, and she heads for the two mountains in the distance, not realizing for some time that she has been shot—but her wound is so insignificant that it does not even bleed. She sees Chucho alive in the distance, talking to the police, and continues trudging forward.

In Chapter Four, “The Obsidian Mound,” Makina makes it through the mountain pass and meets Mr. Aitch’s Driver, who is silent and refuses to take Mr. Aitch’s package. As they drive through the anglo city, Makina sees “signs prohibiting things” everywhere, people seemingly thrilled to purchase things at big stores, and Mexican immigrants working in all the restaurants. The driver drops her at a nondescript street corner, where an Old Man meets her and walks with her to finally deliver the package. They take a long route to distract the police, and meanwhile the Old Man informs Makina that her brother is alive, gives her the brother’s address, and muses that he himself feels he is “just passing through” the United States even though he has been there for 50 years. They arrive at a baseball stadium, where “the anglos play a game to celebrate who they are” by running around their “bases all over the world”—he is referencing both the game itself, which is completely unfamiliar and strange to Makina, and the United States’ military and cultural dominance in the rest of the world. Suddenly, the old man leaves and an old acquaintance of Mr. Aitch, Mr. P, shows up to accept the package.

In Chapter Five, “The Place Where the Wind Cuts like a Knife,” Makina sings the praises of the Mexican people she meets in the United States, who manage to expertly combine their native culture with the anglo one, and thereby create an entirely new world, language, and perspective. After crossing an endless expanse of identical suburbs, which are built for cars and full of people hostile to her presence, Makina finally reaches the address given to her by the Old Man to find “sheer emptiness”: a giant hole in the ground and nothing more.

Chapter Six, “The Place Where Flags Wave,” begins with “a huge redheaded anglo” harassing Makina in what turns out to be a dream. She has passed the cold night in an ATM booth and continues searching for her brother in the morning. By chance, she comes across the boy who harassed her on the bus, and who is now working in a restaurant. He brings her inside to a matronly woman who remembers Makina's brother and gives Makina an address where her brother might be staying. Makina hunts the house down and learns that its previous inhabitants “moved. To another continent.” Only one trace remains: their son, who still works at an army base nearby. Disappointed and distraught, Makina makes her way towards this base while planning what she might do if she never finds her brother. On the way, she sees a crowd of same-sex couples celebrating in front of a government building. Her reaction is split: she is thrilled that they can be open about their sexuality but does not understand why they “imitat[e] people who’ve always despised them” by trying to get married.

In Chapter Seven, “The Place Where People’s Hearts Are Eaten,” Makina arrives at the military base and is astonished to learn that the family’s so-called remaining son is in fact her brother. He tells her “an incredible story”: when he arrived in the United States, the woman from the restaurant referred him to a family that would recruit him for a particular assignment. This family’s rebellious teenage son decided to join the Army on a whim, and the family wanted Makina’s brother to assume his identity and take his place. They promised him money and legal papers—he could assume their son’s identity forever. But they secretly believed he would die. When he returned alive and well, they gave Makina’s brother the little money they could put together and then disappeared forever, leaving him with “money and a new name, but no clue what to do.” Having completed his story, Makina’s brother cuts off the conversation—he has to get back to work, and he gives Makina some cash and sends her off. She opens the letter from Cora, which she never delivered. It read: “Come on back now, we don’t expect anything from you.”

In the brief Chapter Eight, “The Snake that Lies in Wait,” a self-proclaimed “patriotic” policeman forces Makina to kneel in a lineup among a number of “homegrown” Mexican men. He declares that the men and those like them ought to “fall in and ask permission” from more “civilized” whites, and he berates a young man for bringing a book of poetry. The policeman tears a page out of the book and asks the man to confess his crimes, but Makina takes the pen and paper from him and writes a long note in English. She points out the officer’s own racism by writing on behalf of “we the barbarians,” the Latinx people he believes should be locked into an inferior position in American society, worked to the bone but deprived of political rights and forced to submit to and imitate white people. Astonished by Makina’s note, the officer abruptly walks away and frees the men—and Makina verses before the men have a chance to thank her.

The novel’s mysterious final chapter is named after the ninth and final region of Mictlán, “The Obsidian Place with No Windows or Holes for the Smoke.” In the Mexica mythology, this is the soul’s final resting place, the site where one identity is shed and a person is regenerated as something new. The chapter begins with Makina suddenly running into Chucho, who says he has been “looking out for” her and directs her to a strange door. Makina enters and descends the staircase behinds it, which leads to another door, this time one with a sign above reading “Verse.” She is suddenly confounded by this most familiar of words. Behind this door is a room full of people smoking, with no smells and no sounds except a vague trickle of water in the background. “A tall, thin man draped in a baggy leather jacket” hands Makina a file containing her new identity—she is initially overwhelmed but soon grows relieved. She sees her whole life flash before her and closes the book with a counterpart to her first line, telling herself, “I’m ready.” 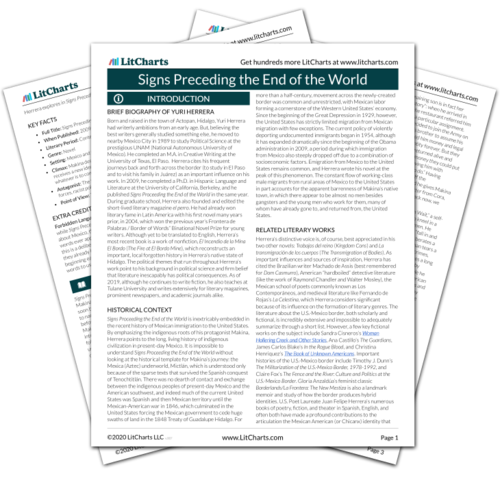 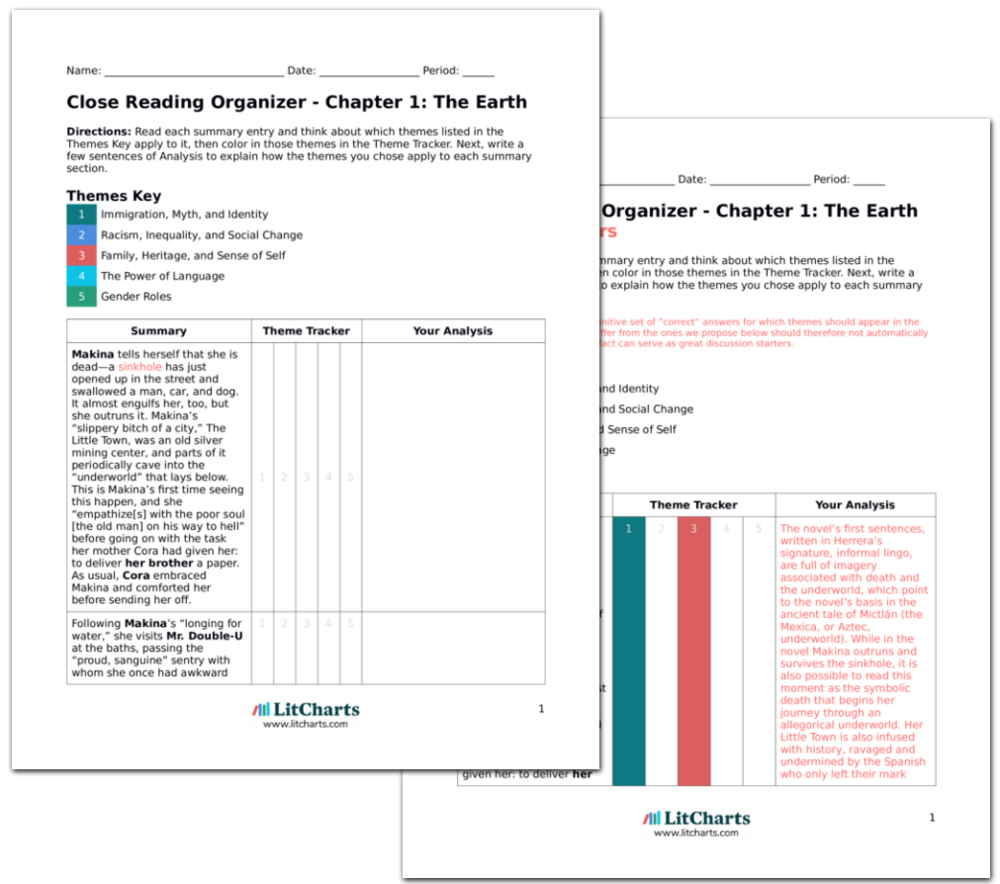