Download this LitChart! (PDF)
Teachers and parents! Struggling with distance learning? Our Teacher Edition on Silence can help.

Welcome to the LitCharts study guide on Shūsaku Endō's Silence. Created by the original team behind SparkNotes, LitCharts are the world's best literature guides.

A concise biography of Shūsaku Endō plus historical and literary context for Silence.

A quick-reference summary: Silence on a single page.

In-depth summary and analysis of every chapter of Silence. Visual theme-tracking, too.

Explanations of Silence's symbols, and tracking of where they appear.

An interactive data visualization of Silence's plot and themes.

Shūsaku Endō was born in 1923 in Tokyo. Though his family lived in Manchuria for 10 years, following his mother’s divorce, Endō and his mother returned to Japan and lived in Kobe with his aunt. Shortly after the return to Tokyo, Endō became a Catholic, as did his mother. Endō attended university in 1943, though his academic career was disrupted by Japan’s entrance into World War II where he was enlisted in a munitions factory; poor health exempted him from becoming a soldier. He finished his B.A. in French Literature in 1949 and then moved on to the University of Lyons, where he studied Catholic fiction. During his study in France, Endō contracted pleurisy (a lung condition). However, Endō finished his second degree in 1953 and published his first novel Shiroihito in 1955, winning a Japanese literature prize for young writers, and married and had a son soon after. Endō published another award-winning novel, Wonderful Fool, in 1958, but in 1959 severe tuberculosis and a second case of pleurisy hospitalized for the following two years, resulting in several surgeries, the loss of one lung, and a newfound sympathy for suffering characters in his writing. Endō published his pinnacle novel Silence in 1966, and his characters’ long struggles in this book were undoubtedly influenced by his own years of pain. The publication of his crowing work resulted not only in critical success, but also invitations from the Portuguese Ambassador to Japan and a medal from the Vatican. Endō continued to write several more award-winning novels, the most notable of which is Samurai, published in 1980, which depicts the conflict between the East and the West much the same as in Silence. Endō received multiple honorary doctorates from around the world, and in 1995 the Japanese government conferred the honor of the Order of Culture onto him. Endō died from complications of a brain hemorrhage the following year.
Get the entire Silence LitChart as a printable PDF.
"My students can't get enough of your charts and their results have gone through the roof." -Graham S.
Download 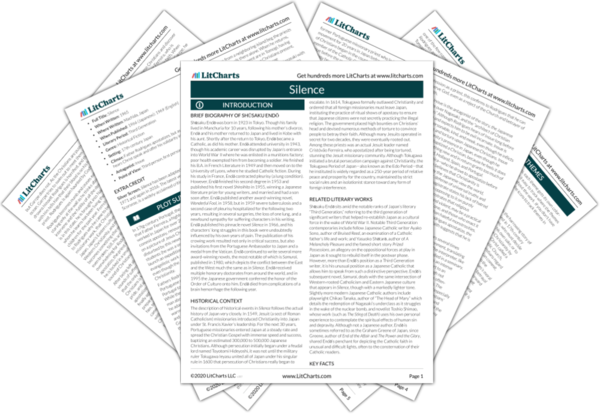 The description of historical events in Silence follows the actual history of Japan very closely. In 1549, Jesuit (a sect of Roman Catholicism) missionaries introduced Christianity into Japan under St. Francis Xavier’s leadership. For the next 30 years, Portuguese missionaries entered Japan at a steady rate and spread the Christian Gospel with immense speed and success, baptizing an estimated 300,000 to 500,000 Japanese Christians. Although persecution initially began under a feudal lord named Toyotomi Hideyoshi, it was not until the military ruler Tokugawa Ieyasu united all of Japan under his singular rule in 1600 that persecution of Christians really began to escalate. In 1614, Tokugawa formally outlawed Christianity and ordered that all foreign missionaries must leave Japan, instituting the practice of ritual shows of apostasy to ensure that Japanese citizens were not secretly practicing the illegal religion. The government placed high bounties on Christians’ head and devised numerous methods of torture to convince people to betray their faith. Although many Jesuits operated in secret for two decades, they were eventually rooted out. Among these priests was an actual Jesuit leader named Cristóvão Ferreira, who apostatized after being tortured, stunning the Jesuit missionary community. Although Tokugawa initiated a brutal persecution campaign against Christianity, the Tokugawa Period of Japan—also known as the Edo Period—that he instituted is widely regarded as a 250-year period of relative peace and prosperity for the country, maintained by strict social rules and an isolationist stance toward any form of foreign interference.

Other Books Related to Silence

Shūsaku Endō sits amid the notable ranks of Japan’s literary “Third Generation,” referring to the third generation of significant writers that helped re-establish Japan as a cultural force in the wake of World War II. Notable Third Generation contemporaries include fellow Japanese Catholic writer Ayako Sono, author of Bruised Reed, an examination of a Catholic father’s life and work; and Yasuoko Shōtarō, author of A Melancholy Pleasure and the famed short story Prized Possessions, an allegory on the oppositional forces at play in Japan as it sought to rebuild itself in the postwar phase. However, more than Endō’s position as a Third Generation writer, it is his unusual position as a Japanese Catholic that allows him to speak from such a distinctive perspective. Endō’s subsequent novel, Samurai, deals with the same intersection of Western-rooted Catholicism and Eastern Japanese culture that appears in Silence, though with a markedly lighter tone. Slightly more modern Japanese Catholic authors include playwright Chikao Tanaka, author of “The Head of Mary” which details the redemption of Nagasaki’s underclass as it struggles in the wake of the nuclear bomb, and novelist Toshio Shimao, whose work (such as The Sting of Death) uses his own personal experience to contemplate the spiritual effects of human sin and depravity. Although not a Japanese author, Endō is sometimes referred to as the Graham Greene of Japan, since Greene, author of End of the Affair and The Power and the Glory, shared Endō’s penchant for depicting the Catholic faith in unusual and difficult lights, often to the consternation of their Catholic readers.
Key Facts about Silence

Silver Screen. Silence has been adapted twice for film, first in 1971 and again in 2016. The latest version, directed by Martin Scorsese, is a widely-acclaimed critical success. 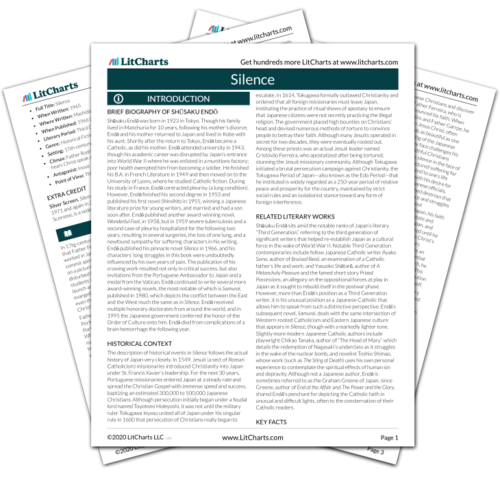 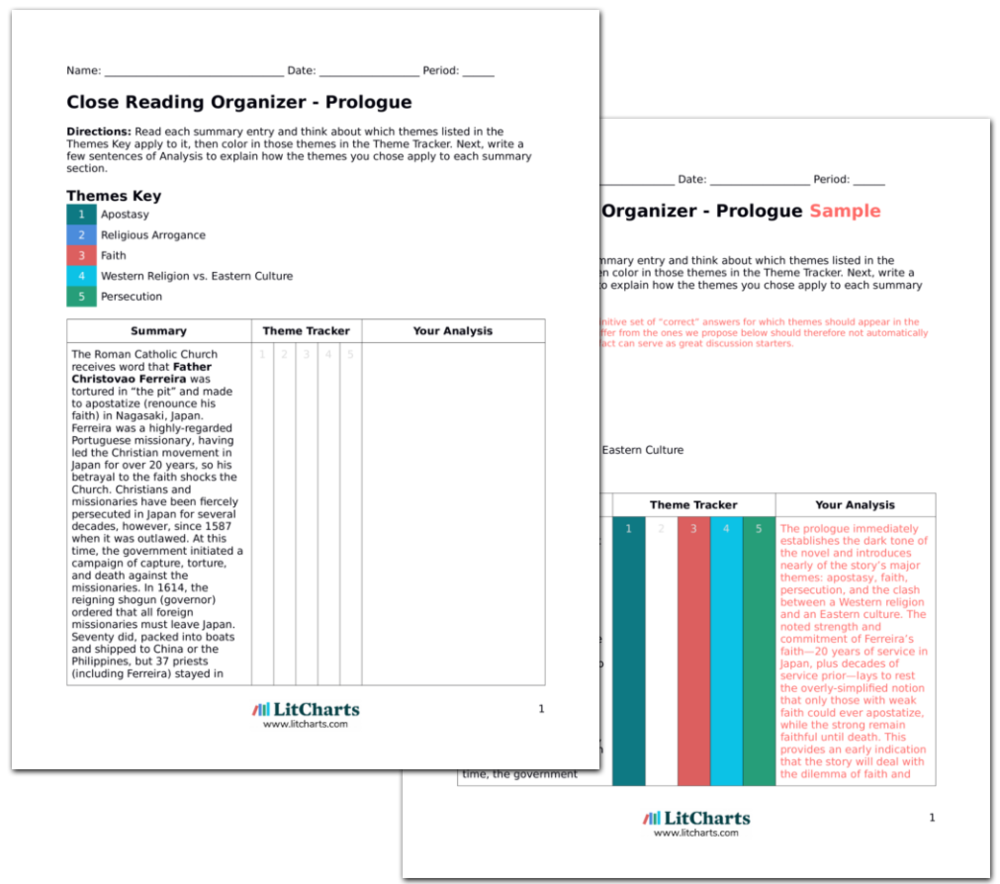