In the San Piedro courtroom, on December 6, 1954, the trial of Kabuo Miyamoto is underway. Kabuo, a local fisherman of Japanese descent, is accused of murdering Carl Heine, another local fisherman. Carl, a war veteran, is well-liked in the community and embodies the ideal, revered San Piedro fisherman: he is respectable, quiet, and he keeps to himself. San Piedro is a small-knit (though judgmental) community of strawberry farmers and fishermen, and Kabuo’s trial brings to light the racist undertones that cut through the islands foggy, cedar-covered landscape.

Like Carl Heine and the rest of San Piedro’s fishermen, Kabuo is reserved and restrained. However, Kabuo’s Japanese ancestry causes much of the courtroom to regard his calm, unreadable demeanor in a more negative light. Especially since the Japanese attack on Pearl Harbor, San Piedro residents have adopted a malicious, skeptical, and racist attitude towards their Japanese neighbors. Kabuo’s trial, and the evidence that leads to his initial arrest, demonstrates the great impact biased “facts” have on the islanders’ notion of larger truths.

Informing the court’s opinion of Kabuo’s demeanor and guilt, too, is the land feud between Kabuo’s and Carl’s families that is thought to be Kabuo’s primary motivation for murder. Before the war, Kabuo’s father, a sharecropper, had purchased seven acres of land from Carl Heine Sr., Carl’s father. When the Miyamotos are forced to relocate to an internment camp after the attack on Pearl Harbor, they miss their last two payments. Soon after this, Carl Sr. dies. His wife, Etta, gains control of the land. Unlike her husband, Etta is hateful and bigoted, and sells all of the land before Kabuo, returned from his imprisonment and military tour, can have a chance to reclaim what is rightfully his. As Kabuo harbors resentment towards Etta for her cruel decision to sell the land, the prosecution claims that this was Kabuo’s motivation for killing Carl, despite the fact that the two were friends as children.

Covering the trial is Ishmael Chambers, the editor of San Piedro’s only paper, the San Piedro Review. Ishmael’s a 31-year-old WWII veteran who lost an arm in battle and hasn’t quite recovered from the psychological traumas he incurred during his military career. Ishmael’s father, Arthur Chambers, founded the Review, and was a widely respected man of acute “moral meticulousness,” who took great care in reporting the island’s news. Though Ishmael would like to emulate his father’s character, his cynical attitude holds him back.

Further fueling Ishmael’s cynicism is his lovesickness for Hatsue Miyamoto, Kabuo’s wife. Through flashbacks, the reader discovers that Ishmael and Hatsue engaged in a passionate teenage romance just over a decade ago. Due to the prejudiced views many islanders held towards the Japanese, the couple had to hide their relationship. Hatsue, the daughter of Japanese immigrants, was forced to conceal her relationship with Ishmael from her family. When she could no longer bear the moral anguish of living a double life, she broke up with Ishmael. Soon after this, Hatsue and her family were forced to relocate to an internment camp. There, she married Kabuo Miyamoto, whom she loves, and whose Japanese ancestry allows her to honor the obligations she has to her family. Ishmael considers Hatsue’s abandonment and subsequent marriage to Kabuo to be betrayals of the highest order, and he exists in a constant state of anger because of it.

The night before Kabuo’s verdict is to be delivered, Ishmael goes down to the lighthouse to research a story on the severe snowstorm that unfolds alongside the trial. There, he uncovers radio transmission logs that reveal the truth of Carl’s death. Kabuo hadn’t murdered Carl, Ishmael discovers; rather, a series of coincidental events led to Carl being thrown from his boat by the wake of a giant freighter.

Ishmael struggles to decide what he should do with the logs. He knows that a morally upstanding man and journalist—such as his father was—would recognize the necessity of coming forth with the truth. Still, Ishmael initially keeps the logs to himself. Withholding the logs, he reasons, will result in Kabuo’s likely indictment. It will also allow him to get back at Hatsue for constant state of misery he lives in as a result of her abandonment. In the end, though, as the jury deliberates, Ishmael presents the radio transmission logs to the court. Kabuo is exonerated of the charges brought against him, and Ishmael, freed of his cynicism and lovesickness, can finally become the upstanding, truthful man he’s wanted to be. 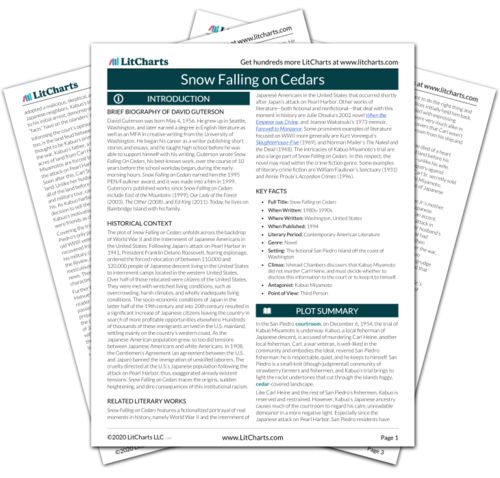 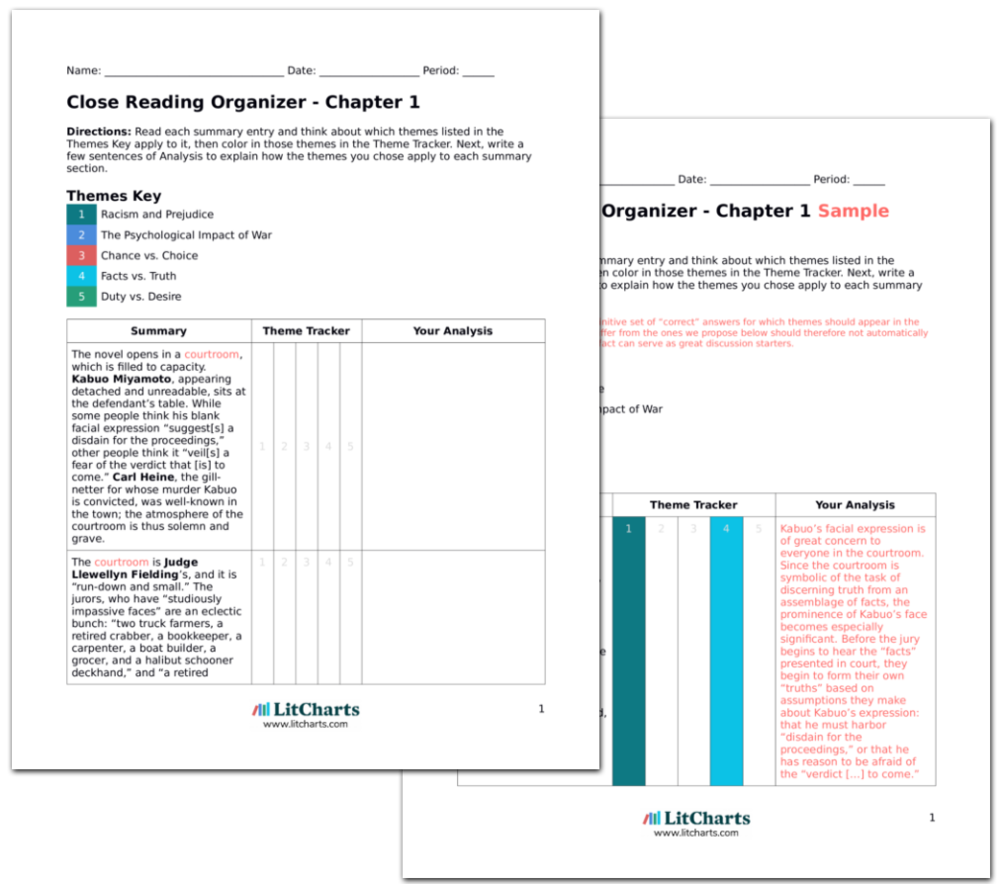