Lily, an 80-year-old Chinese woman, is a widow now, and old enough that she can say things that would once have gotten her in trouble. She says she spent her life longing for love, despite being undeserving of love as a woman. She was an obedient girl and woman, but took obedience too far. Her only rebellion was nu shu, or secret women's writing, and she describes a fan sitting in front of her covered in nu shu notes she exchanged with her laotong (bonded female companion), Snow Flower. The story to follow is Lily's autobiography, which will be burned upon her death.

Lily is born in Yongming County, China, in 1823. At age five, she begins to desire affection from her Mama. When Lily and her cousin, Beautiful Moon, turn six, Mama and Aunt send for a diviner to select an auspicious date to begin their foot binding. Diviner Hu looks at Lily and suggests they consult with a matchmaker. Madame Wang arrives the next day and, after inspecting Lily's feet, tells Mama that Lily's feet could be perfect if they wait a year. Further, Lily may be able to marry into Tongkou (a richer town) and be eligible for a laotong match. Later that night, Mama slaps Lily for the first time, and Lily takes the slap as a sign of love. Aunt begins teaching Lily and Beautiful Moon nu shu, which must be kept secret from men.

The next year, Lily, Beautiful Moon, and Third Sister, who's a year younger, begin their foot binding. The pain is excruciating, and Third Sister puts up a violent fight. One day, Elder Sister allows Third Sister to sit down so she can massage her legs, and she realizes that Third Sister's legs are turning red. Mama unwraps her feet to find putrid, rotten flesh. Third Sister dies soon after, as does Grandmother.

Madame Wang visits and tells Mama she's found Lily a laotong match with a girl named Snow Flower, who is supposedly of a higher class than Lily’s family. She offers Lily a fan and tells Mama to think about the match. Aunt reads the note on the fan to Lily, which is a request to be "old sames." Lily's family agrees to accept the match and Lily decides to send her reply to Snow Flower on the same fan, which goes against tradition. Several weeks later, Madame Wang takes Lily and Snow Flower to the Temple of Gupo Fair to sign their laotong contract. Madame Wang returns both girls to Lily's house, where Snow Flower stays for several days. Once Snow Flower returns home, the girls pass notes to each other often through Madame Wang. Snow Flower's messages are all about birds and flying away, which scares Lily.

Elder Sister is married soon after. The women sing of their sadness as Elder Sister goes, but Lily's county practices the tradition of not moving in with one's in-laws permanently until the woman becomes pregnant. At one point Elder Sister returns from a visit with her in-laws crying, and both Mama and Aunt say it's futile to try to change a woman's miserable life.

When Lily and Snow Flower turn 15, Snow Flower travels to Lily's home for the Catching Cool Breezes festival. All of Lily's other female relatives are visiting family and the weather is oppressively hot. On the third night, Lily and Snow Flower strip their clothes off and write nu shu characters on each other's bodies. Beautiful Moon returns home the next day, and Baba (Lily’s father) and Uncle set the girls up to work on embroidery outside. A bee stings Beautiful Moon and she dies in minutes. Uncle and Aunt are distraught.

Two years later, Lily's wedding day approaches. During Lily's Sitting and Singing ceremony, Madame Wang tells "The Tale of Wife Wang," a story about a woman who marries a butcher but triumphs in the end. Lily thinks it's a cautionary tale for her. Over the next several days Lily attends several banquets where she cannot eat anything, and her panic about "bed business" (sex) rises. Mama tells Lily, "you have promised to be united for life." Lily is terrified. The next morning Snow Flower gives Lily their fan and a note before Lily's in-laws take her to Tongkou. The note reads that Snow Flower is afraid that once she learns the truth, Lily won't love her anymore, and Lily is perplexed. Later that day, Lily and her husband (Dalang) are officially married. Snow Flower doesn't attend the ceremony three days later, and Lily is very hurt.

Lily and Snow Flower then both have daughters, Jade and Spring Moon, and Lily and Snow Flower decide to arrange a laotong match for them. Snow Flower begins to talk of Taipings and rebellions. When drought strikes, Lily's husband decides to travel to faraway Guilin to purchase salt to sell. Not long after he leaves, typhoid strikes Tongkou. Lily barricades herself and her three children in her room and only leaves twice per day. After several weeks the banished servants return and the epidemic wanes. Lily's mother-in-law, however, falls ill. Lily cares for her, as is her duty as the eldest daughter-in-law, but she dies anyway. Lily's father-in-law dies soon after. Lily's husband returns with salt, and he and Lily become the new Master and Lady Lu.

That fall, Lily travels to Jintian to visit with Snow Flower. On the second day of her visit they hear sounds of fighting—the Taiping rebellion has arrived. Snow Flower's husband, the butcher, won't allow Lily to wait for her husband to fetch her and they begin to march up the mountain to safety. They march for a full 36 hours in the freezing cold and listen to the screams of people who slip off the narrow mountain path. When they reach a sheltered area, Snow Flower recognizes some of her friends from Jintain and they set up camp with the three families. The butcher becomes a hero, as he's willing to perform hard tasks. Snow Flower gets pregnant again, as the butcher continues to demand “bed business.” Snow Flower's mother-in-law, a nasty woman, tries to starve Snow Flower's first weak son, but Lily makes it clear she won't allow that to happen. One day, Snow Flower's second son dies unexpectedly. The butcher takes his grief out on Snow Flower and beats her until she miscarries. He beats her daily for the next few weeks. Snow Flower walks to the edge of a cliff and Lily follows her. Lily is afraid she'll jump, but Snow Flower only says that she's wanted to die for a while, and tells Lily that Lily never understood Snow Flower's grief at her stillborn daughters. The groups are told to return to their villages the next day. Lily's husband comes for her and when they greet each other, Lily says his name for the first time.

Lily and Snow Flower see each other regularly over the next few months, but Snow Flower never seems to quite recover from the ordeal in the mountains. Lily begins writing Snow Flower suggestions for how to be a better wife or how to conceive a son. In August, Snow Flower is supposed to visit Lily for a festival, but Lotus, a woman from the mountains, arrives instead with the fan. The fan says that Snow Flower has found other women who love her, and Lily won't have to listen to Snow Flower's laments anymore. Lily is hurt beyond belief. When Madame Wang arrives several weeks later to arrange the laotong match between Jade and Spring Moon, Lily refuses to accept the match.

Both Lily and Snow Flower attend the Sitting and Singing ceremony for a girl in Tongkou. Snow Flower sings a “Letter of Vituperation,” trying to explain herself to Lily. Lily retaliates with her own Letter of Vituperation and accuses Snow Flower of violating their laotong relationship. She tells the full room everything bad about Snow Flower. Snow Flower leaves crying, and afterward Lily truly becomes Lady Lu, as the other women respect her for exposing Snow Flower's discrepancies. Lily tries to burn every note from Snow Flower, but can't find the fan and several other items.

Eight years later, a beggar girl shows up in Lily's house. Lily recognizes her as Spring Moon, who says that Snow Flower is dying and asking for Lily. When Lily arrives, Snow Flower is surrounded by Lotus, Plum Blossom, and Willow, the women from the mountain. Snow Flower apologizes and Lily sees that Snow Flower has a tumor on her stomach the size of a baby. Lily tries to help Snow Flower with diviners, doctors, and special foods, but Snow Flower only gets worse. She dies two weeks later, asking Lily to be an aunt to her two remaining children. After Snow Flower's burial, Plum Blossom, Lotus, and Willow explain to Lily how badly she'd behaved towards Snow Flower. Lily realizes she treated Snow Flower exceedingly poorly and vows to make it right through Snow Flower's children. Spring Moon commits suicide on her wedding night, but Lily arranges for Snow Flower's granddaughter, Peony, to marry her own firstborn grandson. Lily binds Peony's feet herself and tells her stories about herself and Snow Flower.

Lily realizes now that she treated Snow Flower like a bad husband treats his wife. She asks her, and others who witnessed her life, for forgiveness. 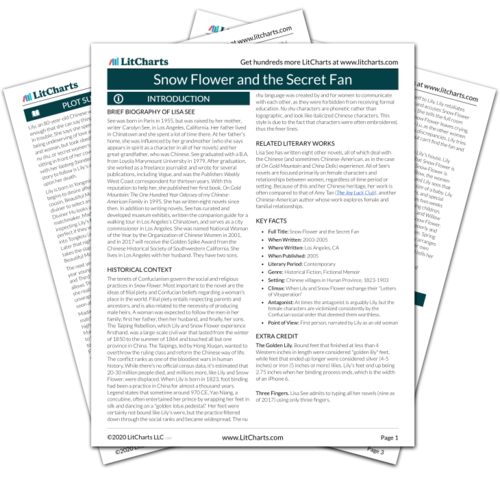 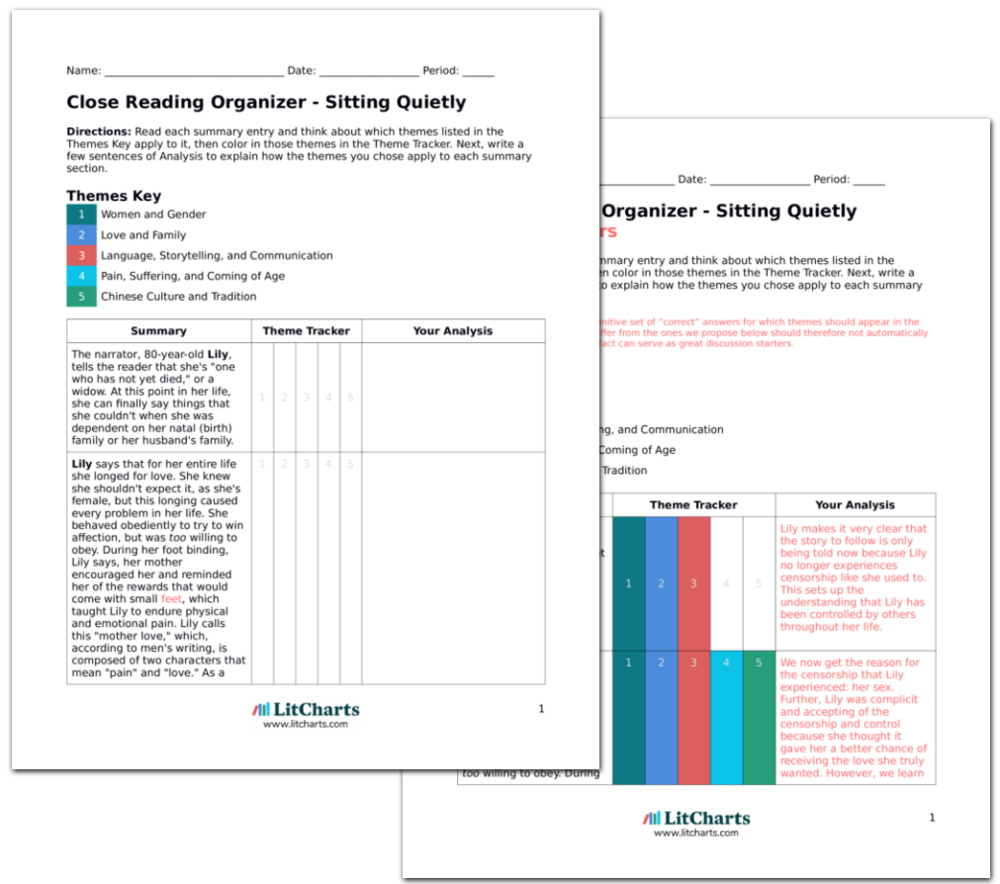