Get LitCharts A+
Alexis Wright is a former Zumba instructor who was found to have been running a brothel out of her studio in Kennebunk, Maine. Wright’s list of over 60 clients was made available to the public and the press—and yet Wright and her lone female client, in a classic example of misogynistic public shaming, were judged far more harshly than the male clients who sought out her services.

Alexis Wright Quotes in So You’ve Been Publicly Shamed

The So You’ve Been Publicly Shamed quotes below are all either spoken by Alexis Wright or refer to Alexis Wright. For each quote, you can also see the other characters and themes related to it (each theme is indicated by its own dot and icon, like this one:

As it happens, Max’s and Andrew’s sins would in Puritan times have been judged graver than Jonah’s. Jonah, “guilty of lying or publishing false news,” would have been “fined, placed in the stocks for a period not exceeding four hours, or publicly whipped with not more than forty stripes,” according to Delaware law. Whereas Max and Andrew, having “defiled the marriage bed,” would have been publicly whipped (no maximum number was specified), imprisoned with hard labor for at least a year, and on a second offense, imprisoned for life.

But the shifting sands of shameworthiness had shifted away from sex scandals—if you’re a man—to work improprieties and perceived white privilege, and I suddenly understood the real reason why Max had survived his shaming. Nobody cared. 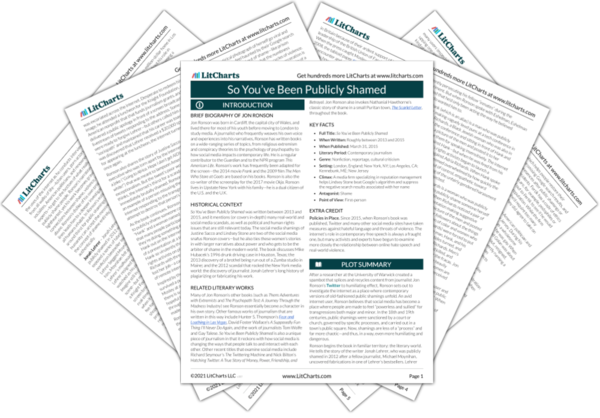 Alexis Wright Character Timeline in So You’ve Been Publicly Shamed

The timeline below shows where the character Alexis Wright appears in So You’ve Been Publicly Shamed. The colored dots and icons indicate which themes are associated with that appearance.

...coastal town overrun with anxiety in the wake of a sex scandal: local Zumba instructor Alexis Wright was found to have been running a brothel out of her exercise studio. She... (full context)