Download this LitChart! (PDF)
Teachers and parents! Struggling with distance learning? Our Teacher Edition on Son of a Trickster can help.

Welcome to the LitCharts study guide on Eden Robinson's Son of a Trickster. Created by the original team behind SparkNotes, LitCharts are the world's best literature guides.

Son of a Trickster: Introduction

A concise biography of Eden Robinson plus historical and literary context for Son of a Trickster.

Son of a Trickster: Plot Summary

A quick-reference summary: Son of a Trickster on a single page.

In-depth summary and analysis of every chapter of Son of a Trickster. Visual theme-tracking, too.

Son of a Trickster: Themes

Explanations, analysis, and visualizations of Son of a Trickster's themes.

Son of a Trickster: Quotes

Son of a Trickster's important quotes, sortable by theme, character, or chapter.

Son of a Trickster: Characters

Description, analysis, and timelines for Son of a Trickster's characters.

Description, analysis, and timelines for Son of a Trickster's terms.

Son of a Trickster: Symbols

Explanations of Son of a Trickster's symbols, and tracking of where they appear.

Son of a Trickster: Theme Wheel

An interactive data visualization of Son of a Trickster's plot and themes.

Eden Robinson was born in Kitamaat, British Columbia and is part of the Haisla and Heiltsuk First Nations. She received a BA from the University of Victoria and an MFA from the University of British Columbia. In 1995, Robinson published her first book, Traplines, a collection of four short stories. The collection won Britain’s Winifred Holtby Memorial Prize. Her second book and first novel, Monkey Beach, was published in 2000 and received the Ethel Wilson Fiction Prize. In 2003, Robinson moved back to Kitamaat Village to care for her father, who was diagnosed with Parkinson’s Disease in 1998. Her third book, Blood Sports, was published in 2006 and returned to the characters of one of the short stories in Traplines. Son of a Trickster, the first book of a planned trilogy, was published in 2017. The second book, Trickster Drift, was published in 2018, and Robinson again won the Ethel Wilson Fiction Prize for her sequel. In 2019, Robinson was diagnosed with polymyalgia rheumatica, an inflammatory disorder that makes it difficult to write, though she continues to do so. Robinson still lives in Kitamaat and plans to publish the third book in the Trickster trilogy in 2021.
Get the entire Son of a Trickster LitChart as a printable PDF.
"My students can't get enough of your charts and their results have gone through the roof." -Graham S.
Download 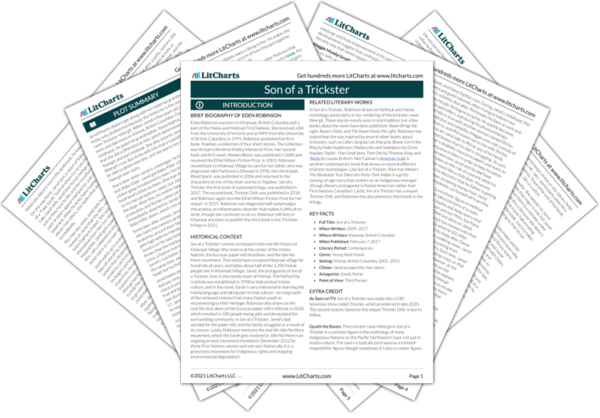 Historical Context of Son of a Trickster

Son of a Trickster’s events are based in the real-life history of Kitamaat Village (the reserve at the center of the Haisla Nation), the Eurocan paper mill shutdown, and the Idle No More movement. The Haisla have occupied Kitamaat village for hundreds of years, and today about half of the 1,700 Haisla people live in Kitamaat Village. Jared, the protagonist of Son of a Trickster, lives in the nearby town of Kitimat. The Na’Na’Kila Institute was established in 1998 to help protect Haisla culture, and in the novel, Sarah is very interested in learning the Haisla language and taking part in that culture—an outgrowth of the renewed interest from many Native youth in reconnecting to their heritage. Robinson also draws on the real-life shut down of the Eurocan paper mill in Kitimat in 2010, which resulted in 500 people losing jobs and devastated the surrounding community. In Son of a Trickster, Jared’s dad worked for the paper mill, and the family struggled as a result of its closure. Lastly, Robinson mentions the real-life Idle No More movement, which the Sarah gets involved in. Idle No More is an ongoing protest movement founded in December 2012 by three First Nations women and one non-Native ally. It is a grassroots movement for Indigenous rights and stopping environmental degradation.

Other Books Related to Son of a Trickster

In Son of a Trickster, Robinson draws on Heiltsuk and Haisla mythology, particularly in her rendering of the trickster raven Wee’git. These stories mostly exist in oral tradition, but a few books about the raven have been published: Raven Brings the Light, Raven’s Feast, and The Raven Steals the Light. Robinson has stated that she was inspired by several other books about tricksters, such as Celia's Song by Lee Maracle; Brown Girl in the Ring by Nalo Hopkinson; Motorcycles and Sweetgrass by Drew Hayden Taylor;  One Good Story, That One by Thomas King; and Tracks by Louise Erdrich. Neil Gaiman’s American Gods is another contemporary book that draws on several different trickster mythologies. Like Son of a Trickster, Sherman Alexie’s The Absolutely True Diary of a Party-Time Indian is a gritty coming-of-age story that centers on an Indigenous teenager (though Alexie’s protagonist is Native American rather than First Nations Canadian). Lastly, Son of a Trickster has a sequel, Trickster Drift, and Robinson has also planned a third book in the trilogy.
Key Facts about Son of a Trickster

Extra Credit for Son of a Trickster

As Seen on TV. Son of a Trickster was made into a CBC television show called Trickster, which premiered in late 2020. The second season, based on the sequel Trickster Drift, is due to follow.

Quoth the Raven. The trickster raven Wee’git in Son of a Trickster is a common figure in the mythology of many Indigenous Nations on the Pacific Northwest Coast, not just in Haisla culture. The raven is typically portrayed as a trickster shapeshifter figure, though sometimes it’s also a creator figure. 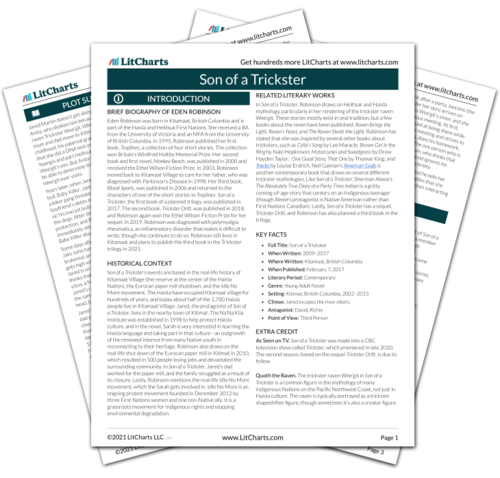 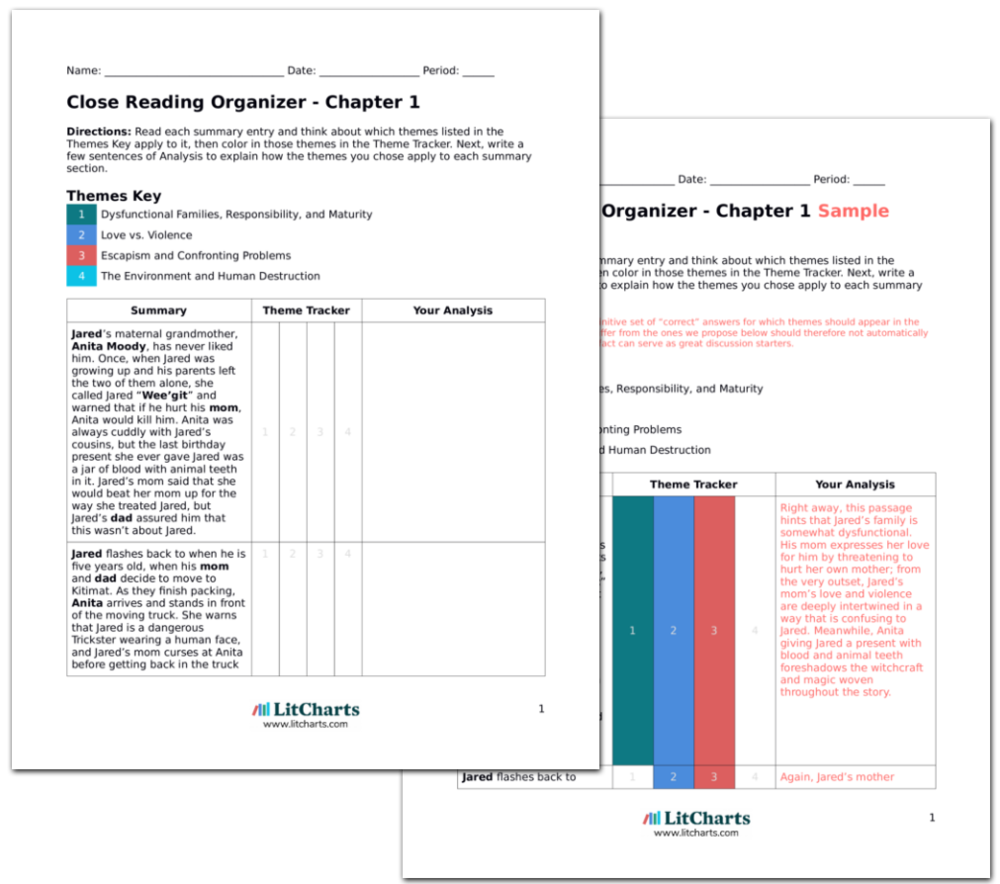