Download this LitChart! (PDF)
Teachers and parents! Struggling with distance learning? Our Teacher Edition on Starship Troopers can help.

Welcome to the LitCharts study guide on Robert A. Heinlein's Starship Troopers. Created by the original team behind SparkNotes, LitCharts are the world's best literature guides.

A concise biography of Robert A. Heinlein plus historical and literary context for Starship Troopers.

A quick-reference summary: Starship Troopers on a single page.

In-depth summary and analysis of every chapter of Starship Troopers. Visual theme-tracking, too.

Explanations of Starship Troopers's symbols, and tracking of where they appear.

An interactive data visualization of Starship Troopers's plot and themes.

Brief Biography of Robert A. Heinlein

Robert Heinlein was the third of seven children born to Rex and Bam Heinlein. Heinlein grew up in Kansas City, Missouri in a German-American family that had been in the U.S. for six generations. He attended the U.S. Naval Academy in Annapolis, Maryland, graduating in 1929 with an ensign’s commission and the equivalent of an engineering degree. His Navy assignments included radio communications—still a relatively new technology in the early 1930s—and gunner. He took early retirement after five years, having suffered tuberculosis and chronic sea sickness during his term. When the U.S. entered World War II, he was prevented from reenlisting due to the tuberculosis, as there wasn’t yet a cure available. Heinlein worked a series of odd jobs and dabbled in politics after leaving the Navy. His first short story, “Life Line,” was published in Astounding Science Fiction in 1939, launching his literary career. During his lifetime, Heinlein published 32 novels, 59 short stories, and 16 collections; more nonfiction, poetry, short stories, and collections were published after his death. In his later years, Heinlein suffered a series of health crises, including one which required multiple blood transfusions. Subsequently, in the 1970s, he and his wife became advocates for reorganizing and expanding the American blood donation system. In 1977, he was one of the first people to undergo a carotid bypass surgery. He died in his sleep of heart failure and emphysema—having been a lifelong smoker—in 1988.
Get the entire Starship Troopers LitChart as a printable PDF.
"My students can't get enough of your charts and their results have gone through the roof." -Graham S.
Download 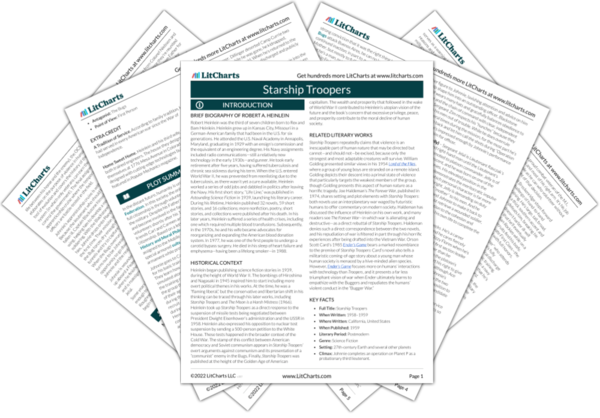 Heinlein began publishing science fiction stories in 1939, during the height of World War II. The bombings of Hiroshima and Nagasaki in 1945 inspired him to start including more overt political themes in his works. At the time, he was a “flaming liberal,” but the conservative and libertarian shift in his thinking can be traced through his later works, including Starship Troopers and The Moon is a Harsh Mistress (1966). Heinlein took up Starship Troopers as a direct response to the suspension of missile tests being negotiated between President Dwight Eisenhower’s administration and the USSR in 1958. Heinlein also expressed his opposition to nuclear test suspension by sending a 500-person petition to the White House. These tests happened in the broader context of the Cold War. The stamp of this conflict between American democracy and Soviet communism appears in Starship Troopers’ overt arguments against communism and its presentation of a “communist” enemy in the Bugs. Finally, Starship Troopers was published at the height of the Golden Age of American capitalism. The wealth and prosperity that followed in the wake of World War II contributed to Heinlein’s utopian vision of the future and the book’s concern that excessive privilege, peace, and prosperity contribute to the moral decline of human society.

Other Books Related to Starship Troopers

Starship Troopers repeatedly claims that violence is an inescapable part of human nature that may be directed but cannot—and should not—be excised, because only the strongest and most adaptable creatures will survive. William Golding presented similar views in his 1954 Lord of the Flies, where a group of young boys are stranded on a remote island. Golding depicts their descent into a primal state of violence that particularly targets the weakest members of the group, though Golding presents this aspect of human nature as a horrific tragedy. Joe Haldeman’s The Forever War, published in 1974, shares setting and plot elements with Starship Troopers: both novels use an interplanetary war waged by futuristic humans to offer commentary on modern society. Haldeman has discussed the influence of Heinlein on his own work, and many readers see The Forever War—in which war is alienating and destructive—as a direct rebuttal of Starship Troopers. Haldeman denies such a direct correspondence between the two novels, and his repudiation of war is filtered in part through his horrific experiences after being drafted into the Vietnam War. Orson Scott Card’s 1985 Ender’s Game bears a marked resemblance to the premise of Starship Troopers: Card’s novel also tells a militaristic coming-of-age story about a young man whose human society is menaced by a hive-minded alien species. However, Ender’s Game focuses more on humans’ interactions with technology than Troopers, and it presents a far less triumphant vision of war when Ender ultimately learns to empathize with the Buggers and repudiates the humans’ violent conduct in the “Bugger War.”
Key Facts about Starship Troopers

A Tradition of Service. According to family tradition, Heinleins had served in every American war since the War of Independence.

Home Sweet Home. Heinlein and his third wife, Virginia, were both trained engineers. The house they designed for themselves at 1776 Mesa Avenue in Colorado Springs was designed with cutting-edge technologies built in and was featured in Popular Mechanics magazine. 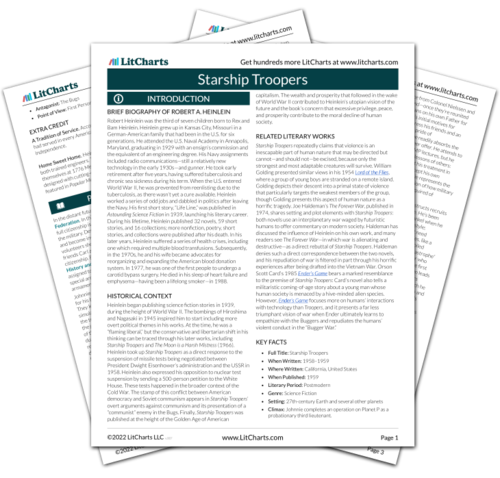 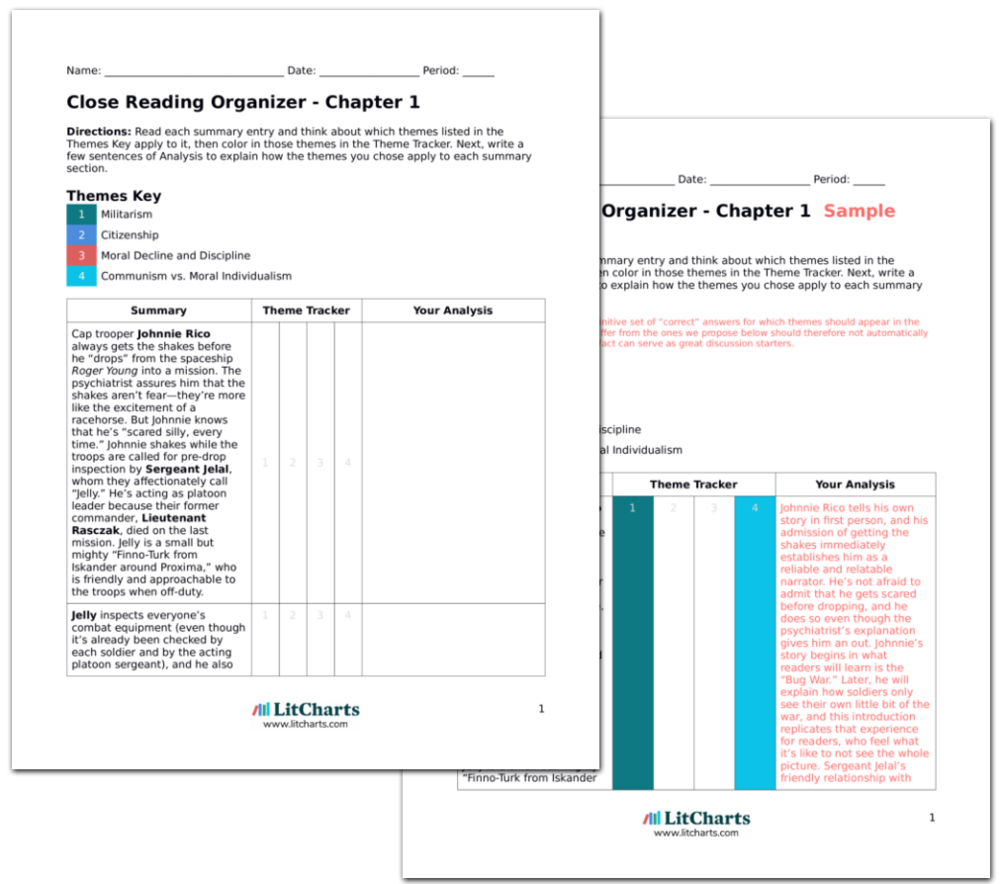