Download this LitChart! (PDF)
Teachers and parents! Struggling with distance learning? Our Teacher Edition on Still Alice can help.

Welcome to the LitCharts study guide on Lisa Genova's Still Alice. Created by the original team behind SparkNotes, LitCharts are the world's best literature guides.

A concise biography of Lisa Genova plus historical and literary context for Still Alice.

A quick-reference summary: Still Alice on a single page.

In-depth summary and analysis of every chapter of Still Alice. Visual theme-tracking, too.

Explanations of Still Alice's symbols, and tracking of where they appear.

An interactive data visualization of Still Alice's plot and themes.

Lisa Genova was born November 22, 1970 in Waltham, Massachusetts. Genova earned her Bachelor of Science in biopsychology from Bates College, followed by a PhD in neuroscience from Harvard University in 1998. Genova has conducted research at Massachusetts General Hospital and Yale Medical School. Genova self-published her first novel, Still Alice, in 2007. It was later picked up by Simon & Schuster and adapted into an Oscar-winning movie starring Julianne Moore and Alec Baldwin. In 2015, Genova was awarded the Pell Center Prize for Story in the Public Square and a number of other awards and recognitions, primarily for her work in raising awareness of Alzheimer’s disease and the importance of early detection. Genova has since published four other books and currently lives with her children in Massachusetts.
Get the entire Still Alice LitChart as a printable PDF.
"My students can't get enough of your charts and their results have gone through the roof." -Graham S.
Download 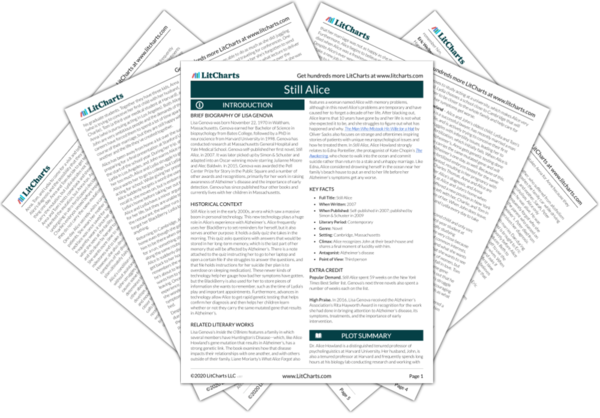 Still Alice is set in the early 2000s, an era which saw a massive boom in personal technology. This new technology plays a huge role in Alice’s experience with Alzheimer’s. Alice frequently uses her BlackBerry to set reminders for herself, but it also serves another purpose: it holds a daily quiz she takes in the morning. This quiz asks questions with answers that would be stored in her long-term memory, which is the last part of her memory that will be affected by Alzheimer’s. There is a note attached to the quiz instructing her to go to her laptop and open a certain file if she struggles to answer the questions, and that file holds instructions for her suicide (her plan is to overdose on sleeping medication). These newer kinds of technology help her gauge how bad her symptoms have gotten, but the BlackBerry is also used for her to store pieces of information she wants to remember, such as the time of Lydia’s play and important appointments. Furthermore, advances in technology allow Alice to get rapid genetic testing that helps confirm her diagnosis and then helps her children learn whether or not they carry the same mutated gene that results in Alzheimer’s.

Other Books Related to Still Alice

Lisa Genova’s Inside the O’Briens features a family in which several members have Huntington’s Disease—which, like Alice Howland’s gene mutation that results in Alzheimer’s, has a strong genetic link. The book examines how that disease impacts their relationships with one another, and with others outside of their family. Liane Moriarty’s What Alice Forgot also features a woman named Alice with memory problems, although in this novel Alice’s problems are temporary and have caused her to forget a decade of her life. After blacking out, Alice learns that 10 years have gone by and her life is not what she expected it to be, and she struggles to figure out what has happened and why. The Man Who Mistook His Wife for a Hat by Oliver Sacks also focuses on strange and oftentimes inspiring stories of patients with unique neuropsychological issues and how he treated them. In Still Alice, Alice Howland strongly relates to Edna Pontellier, the protagonist of Kate Chopin’s The Awakening, who chose to walk into the ocean and commit suicide rather than return to a stale and unhappy marriage. Like Edna, Alice considered drowning herself in the ocean near her family’s beach house to put an end to her life before her Alzheimer’s symptoms get any worse.
Key Facts about Still Alice

High Praise. In 2016, Lisa Genova received the Alzheimer’s Association’s Rita Hayworth Award in recognition for the work she had done in bringing attention to Alzheimer’s disease, its symptoms, treatments, and the importance of early intervention. 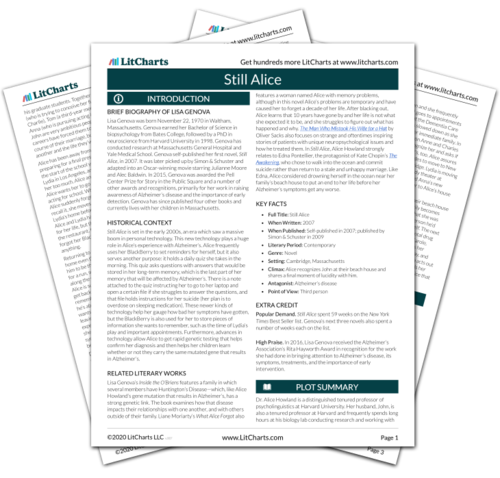 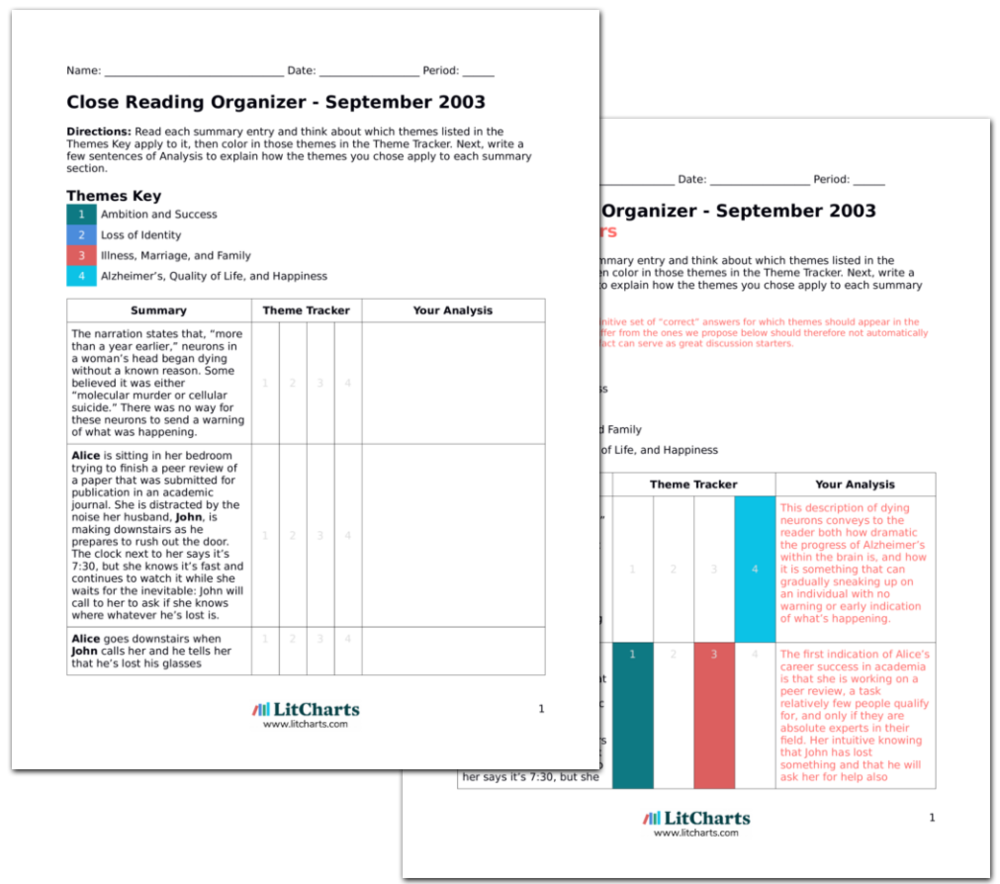