Download this LitChart! (PDF)
Teachers and parents! Struggling with distance learning? Our Teacher Edition on Survival in Auschwitz can help.

Welcome to the LitCharts study guide on Primo Levi's Survival in Auschwitz. Created by the original team behind SparkNotes, LitCharts are the world's best literature guides.

A concise biography of Primo Levi plus historical and literary context for Survival in Auschwitz.

A quick-reference summary: Survival in Auschwitz on a single page.

In-depth summary and analysis of every chapter of Survival in Auschwitz. Visual theme-tracking, too.

Explanations, analysis, and visualizations of Survival in Auschwitz's themes.

Description, analysis, and timelines for Survival in Auschwitz's characters.

Description, analysis, and timelines for Survival in Auschwitz's terms.

Explanations of Survival in Auschwitz's symbols, and tracking of where they appear.

An interactive data visualization of Survival in Auschwitz's plot and themes.

Primo Levi was born to well-educated Jewish parents in 1919. A small, shy child and the only Jew in his school, Levi was often bullied by his classmates, but he excelled academically. As a teenager, Levi joined Italy’s Fascist youth movement, as was expected of all young men. He studied chemistry at Turin University, but the the 1938 Italian Racial Laws (which encouraged heavy discrimination against ethnic Jews) made it difficult for him to find a supervisor for his thesis as well as his first job. After the Fascist leader Mussolini was deposed by his own government in 1943, German forces occupied northern and central Italy, established Mussolini as a puppet governor, and increased the persecution of Jewish people. Levi and several of his friends fled to the Alps and formed a small anti-Fascist coalition, but they were arrested by the Fascist militia later that year, who turned them over to the SS. He was taken from Italy to Auschwitz concentration camp in Poland. The year that Levi spent in the concentration camp is described in Survival in Auschwitz. One of Auschwitz’s few survivors, Levi returned home to Turin, Italy in 1945, where he soon met his future wife Lucia and began working as a chemist. Levi began writing his recollection of Auschwitz in 1946, finishing the Italian manuscript by the end of the year with Lucia’s help. He continued working as a chemist and would not publish another book for 16 years, by which time he was married and had two children. In 1963, Levi published The Truce, an account of journey home from Poland to Italy, and won an Italian literature award, the success of which grew the audience of his first memoir as well. Levi began writing more prolifically, authoring two more memoirs, one novel, several volumes of short stories, and a collection of poetry. However, the same year that The Truce was published, Levi began to suffer serious depression, apparently brought on by the trauma of Auschwitz he experienced decades before. Levi retired from chemistry in 1977 to write full-time, establishing himself as a respected figure of Italian literature. Levi died in 1987, having fallen from a three-story balcony. The presiding coroner determined it was a suicide and multiple biographers agree, though several of Levi’s close friends dispute this claim. When Levi died, Elie Wiesel, another Holocaust survivor and author stated, “Primo Levi died at Auschwitz forty years later.”
Get the entire Survival in Auschwitz LitChart as a printable PDF.
"My students can't get enough of your charts and their results have gone through the roof." -Graham S.
Download 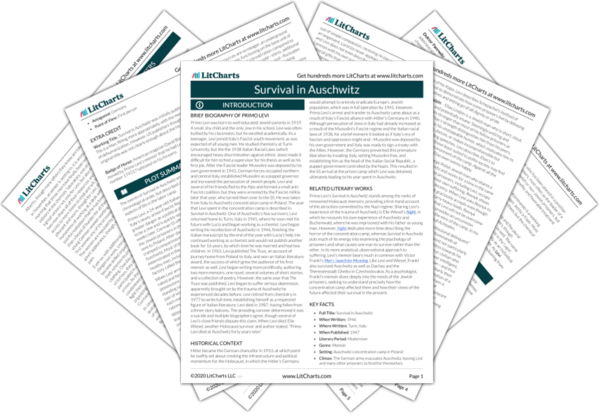 Historical Context of Survival in Auschwitz

Hitler became the German chancellor in 1933, at which point he swiftly set about creating the infrastructure and political momentum for the Holocaust, in which the Hitler’s Germany would attempt to entirely eradicate Europe’s Jewish population, which was in full operation by 1941. However, Primo Levi’s arrest and transfer to Auschwitz came about as a result of Italy’s Fascist alliance with Hitler’s Germany in 1940. Although persecution of Jews in Italy had already increased as a result of the Mussolini’s Fascist regime and the Italian racial laws of 1938, for a brief moment it looked as if Italy’s era of fascism and oppression might end—Mussolini was deposed by his own government and Italy was ready to sign a treaty with the Allies. However, the Germans prevented this premature liberation by invading Italy, setting Mussolini free, and establishing him as the head of the Italian Social Republic, a puppet-government controlled by the Nazis. This resulted in the SS arrival at the prison camp which Levi was detained, ultimately leading to his year spent in Auschwitz.

Other Books Related to Survival in Auschwitz

Primo Levi’s Survival in Auschwitz stands among the ranks of renowned Holocaust memoirs, providing a first-hand account of the atrocities committed by the Nazi regime. Sharing Levi’s experience of the trauma of Auschwitz is Elie Wiesel’s Night, in which he recounts his own experience of Auschwitz and Buchenwald, where he was imprisoned with his father as young man. However, Night dedicates more time describing the horror of the concentration camp, whereas Survival in Auschwitz puts much of its energy into examining the psychology of prisoners and what causes one man to survive rather than the other. In its more analytical, observational approach to suffering, Levi’s memoir bears much in common with Victor Frankl’s Man’s Search for Meaning. Like Levi and Wiesel, Frankl also survived Auschwitz as well as Dachau and the Theresienstadt Ghetto in Czechoslovakia. As a psychologist, Frankl’s memoir dives deeply into the minds of the Jewish prisoners, seeking to understand precisely how the concentration camp affected them and how their views of the future affected their survival in the present.
Key Facts about Survival in Auschwitz

Extra Credit for Survival in Auschwitz

Working Title. Survival in Auschwitz was initially published as If This is a Man, fitting more appropriately with the memoirs study of dehumanization. However, US publishers thought that the original title was not clearly enough about the Holocaust.

Badge of Honor. American magician David Blaine was so moved by Primo Levi’s memoir that he had Levi’s prison number 174517 tattooed on his forearm. 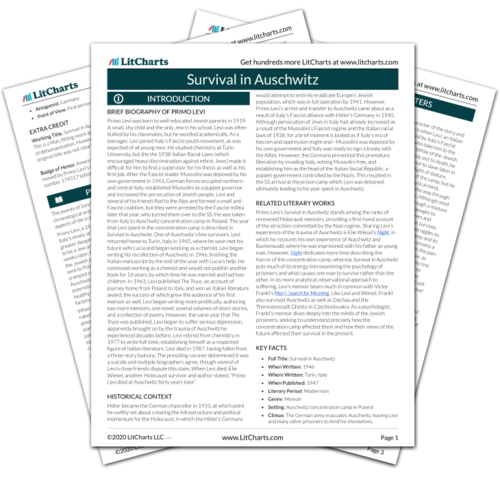 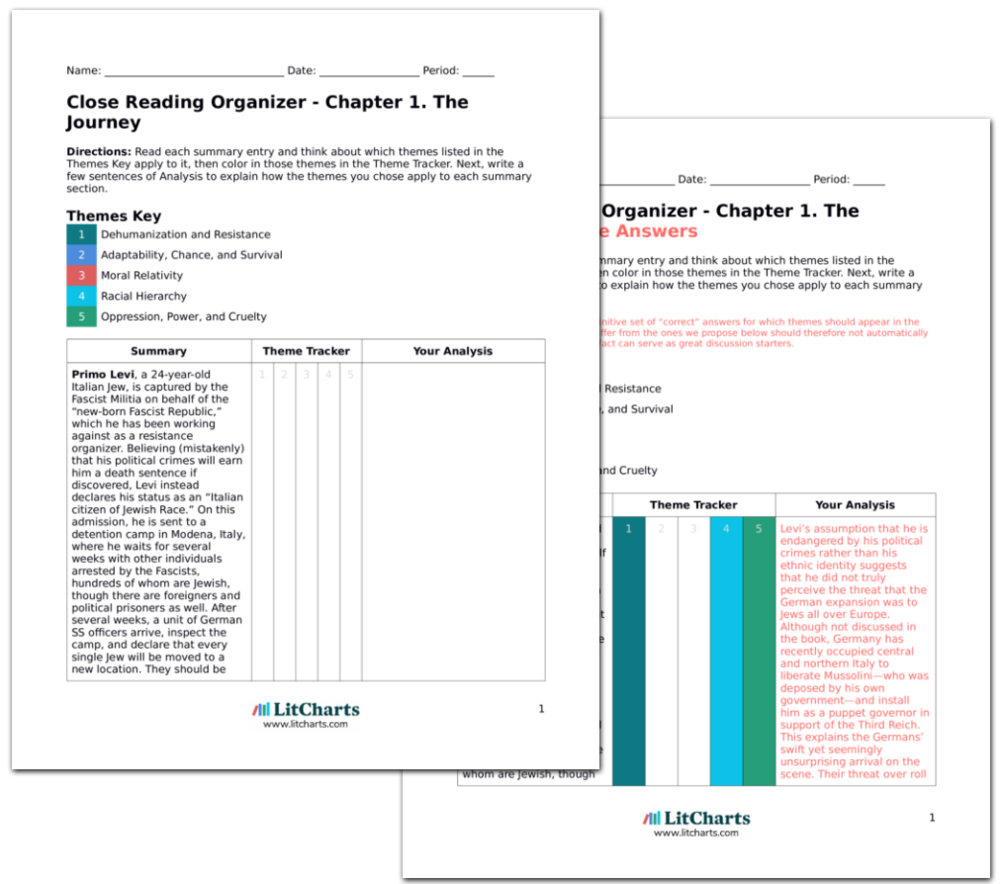