Download this LitChart! (PDF)
Teachers and parents! Struggling with distance learning? Our Teacher Edition on Survival of the Sickest can help.

Welcome to the LitCharts study guide on Sharon Moalem's Survival of the Sickest. Created by the original team behind SparkNotes, LitCharts are the world's best literature guides.

Survival of the Sickest: Introduction

A concise biography of Sharon Moalem plus historical and literary context for Survival of the Sickest.

Survival of the Sickest: Plot Summary

A quick-reference summary: Survival of the Sickest on a single page.

In-depth summary and analysis of every chapter of Survival of the Sickest. Visual theme-tracking, too.

Survival of the Sickest: Themes

Explanations, analysis, and visualizations of Survival of the Sickest's themes.

Survival of the Sickest: Quotes

Survival of the Sickest's important quotes, sortable by theme, character, or chapter.

Survival of the Sickest: Characters

Description, analysis, and timelines for Survival of the Sickest's characters.

Description, analysis, and timelines for Survival of the Sickest's terms.

Survival of the Sickest: Symbols

Explanations of Survival of the Sickest's symbols, and tracking of where they appear.

Survival of the Sickest: Theme Wheel

An interactive data visualization of Survival of the Sickest's plot and themes.

Moalem was born in Israel before his family immigrated to Toronto, Canada, when he was 18 months old. Moalem then studied biology at the University of Guelph in Ontario, Canada before receiving a PhD in human physiology, specializing in neurogenetics, from the University of Toronto. He went on to earn his Doctor of Medicine from Mount Sinai School of Medicine in New York City. After his junior year in college, he and four other students worked with the King of Thailand to run an orphanage for infants and young children who came from HIV-positive mothers. Moalem’s subsequent research also led to developments in genetic understanding of Alzheimer’s disease and several rare inherited syndromes. Moalem has also founded two biotechnology companies and been awarded 25 patents for inventions related to biotechnology and human health. He has also written several bestselling books intended to make science accessible to the general public, including Survival of the Sickest (2007). Moalem currently lives in New York City.
Get the entire Survival of the Sickest LitChart as a printable PDF.
"My students can't get enough of your charts and their results have gone through the roof." -Graham S.
Download 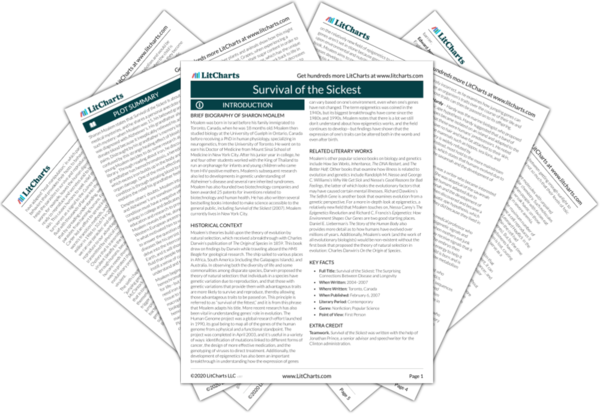 Historical Context of Survival of the Sickest

Moalem’s theories build upon the theory of evolution by natural selection, which received a breakthrough with Charles Darwin’s publication of The Origin of Species in 1859. This book drew on findings by Darwin while traveling aboard the HMS Beagle for geological research. The ship sailed to various places in Africa, South America (including the Galapagos Islands), and Australia. In observing both the diversity of life and some commonalities among disparate species, Darwin proposed the theory of natural selection: that individuals in a species have genetic variation due to reproduction, and that those with genetic variations that provide them with advantageous traits are more likely to survive and reproduce, thereby allowing those advantageous traits to be passed on. This principle is referred to as “survival of the fittest,” and it is from this phrase that Moalem adapts his title. More recent research has also been vital in understanding genes’ role in evolution. The Human Genome project was a global research effort launched in 1990, its goal being to map all of the genes of the human genome from a physical and a functional standpoint. The project was completed in April 2003, and it’s useful in a variety of ways: identification of mutations linked to different forms of cancer, the design of more effective medication, and the genotyping of viruses to direct treatment. Additionally, the development of epigenetics has also been an important breakthrough in understanding how the expression of genes can vary based on one’s environment, even when one’s genes have not changed. The term epigenetics was coined in the 1940s, but its biggest breakthroughs have come since the 1980s and 1990s. Moalem notes that there is a lot we still don’t understand about how epigenetics works, and the field continues to develop—but findings have shown that the expression of one’s traits can be altered both in the womb and even after birth.

Other Books Related to Survival of the Sickest

Moalem’s other popular science books on biology and genetics include How Sex Works, Inheritance, The DNA Restart, and The Better Half. Other books that examine how illness is related to evolution and genetics include Randolph M. Nesse and George C. Williams’s Why We Get Sick and Nesse’s Good Reasons for Bad Feelings, the latter of which looks the evolutionary factors that may have caused certain mental illnesses. Richard Dawkins’s The Selfish Gene is another book that examines evolution from a genetic perspective. For a more in-depth look at epigenetics, a relatively new field that Moalem touches on, Nessa Carey’s The Epigenetics Revolution and Richard C. Francis’s Epigenetics: How Environment Shapes Our Genes are two good starting places. Daniel E. Lieberman’s The Story of the Human Body also provides more detail as to how humans have evolved over millions of years. Additionally, Moalem’s work (and the work of all evolutionary biologists) would be non-existent without the first book that proposed the theory of natural selection in evolution: Charles Darwin’s On the Origin of Species.
Key Facts about Survival of the Sickest

Extra Credit for Survival of the Sickest

Teamwork. Survival of the Sickest was written with the help of Jonathan Prince, a senior advisor and speechwriter for the Clinton administration. 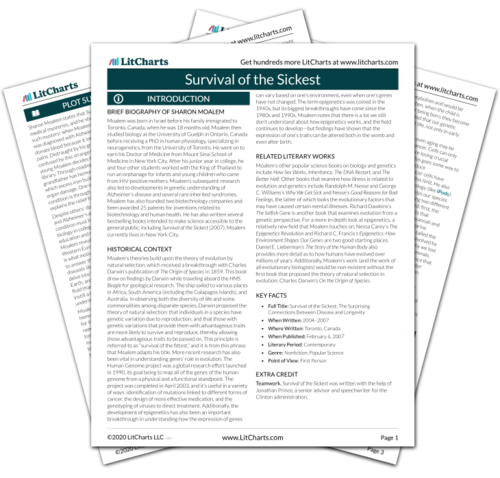 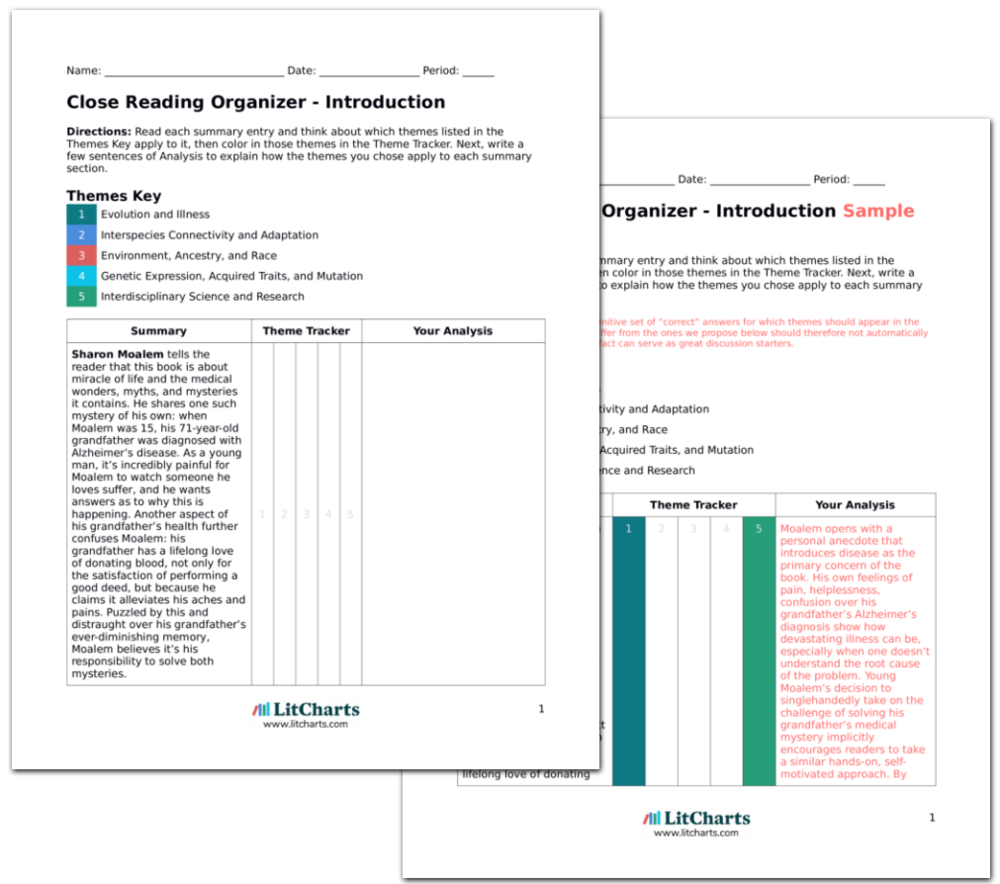