Download this LitChart! (PDF)
Teachers and parents! Struggling with distance learning? Our Teacher Edition on Tender Is the Night can help.

Welcome to the LitCharts study guide on F. Scott Fitzgerald's Tender Is the Night. Created by the original team behind SparkNotes, LitCharts are the world's best literature guides.

Tender Is the Night: Introduction

A concise biography of F. Scott Fitzgerald plus historical and literary context for Tender Is the Night.

Tender Is the Night: Plot Summary

A quick-reference summary: Tender Is the Night on a single page.

In-depth summary and analysis of every chapter of Tender Is the Night. Visual theme-tracking, too.

Tender Is the Night: Themes

Explanations, analysis, and visualizations of Tender Is the Night's themes.

Tender Is the Night: Quotes

Tender Is the Night's important quotes, sortable by theme, character, or chapter.

Tender Is the Night: Characters

Description, analysis, and timelines for Tender Is the Night's characters.

Tender Is the Night: Symbols

Explanations of Tender Is the Night's symbols, and tracking of where they appear.

Tender Is the Night: Theme Wheel

An interactive data visualization of Tender Is the Night's plot and themes.

Fitzgerald was the son of Edward Fitzgerald, a respectable businessman from a gentile family, and Mollie McQuillan, the descendent of Irish immigrants. Fitzgerald loved writing throughout his childhood, but it wasn’t until he attended Catholic school in 1911 that a priest recognized his talent. Encouraged to pursue his literary ambitions, Fitzgerald went to Princeton in 1913. Fitzgerald’s writing thrived in the university environment, but while he was busy creating prose, poetry, and musical comedies, his grades suffered. He left Princeton in 1917, without a degree, to join the army. Fitzgerald never fought in World War I, however, because his battalion had not yet left for Europe when the armistice was agreed. Having fallen madly in love with a young woman named Zelda Sayre while training in the army, Fitzgerald now focused his ambitions on making enough money to marry. He dabbled in advertising for a while but didn’t meet his success until 1920, when his first publication, This Side of Paradise, threw him into the spotlight. Fitzgerald and Zelda married and enjoyed his literary success throughout the 1920s, during which they wrote, traveled through Europe, and had a daughter, Scottie. Fitzgerald received great literary acclaim for his work, namely for The Great Gatsby (1925), and the couple moved in fashionable and artistic circles. Towards the end of the decade, however, their lives began to unravel; Fitzgerald’s alcoholism made him increasingly volatile, and the stress of Zelda’s ballet dancing career led to her mental breakdown in 1930. Moving back to America, and haunted by ill health, Fitzgerald found it almost impossible to work during the 1930s, and his writing career suffered. After a brief stint working in Hollywood and writing in magazines, Fitzgerald died in 1940 of a heart attack.
Get the entire Tender Is the Night LitChart as a printable PDF.
"My students can't get enough of your charts and their results have gone through the roof." -Graham S.
Download 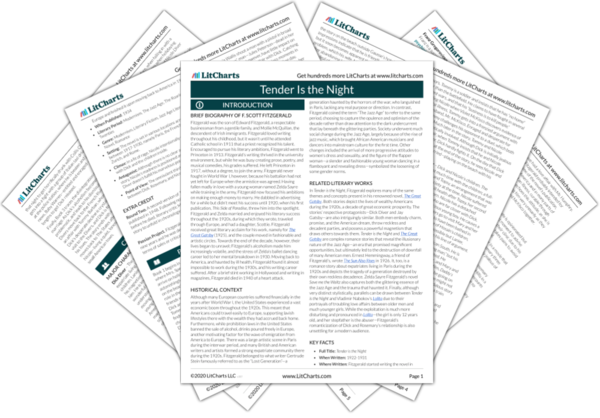 Historical Context of Tender Is the Night

Although many European countries suffered financially in the years after World War I, the United States experienced a vast economic boom throughout the 1920s. This meant that Americans could travel easily to Europe, supporting lavish lifestyles there with the wealth they had accrued back home. Furthermore, while prohibition laws in the United States banned the sale of alcohol, drinks poured freely in Europe, another motivating factor for the wave of emigration from America to Europe. There was a large artistic scene in Paris during the interwar period, and many British and American writers and artists formed a strong expatriate community there during the 1920s. Fitzgerald belonged to what writer Gertrude Stein famously referred to as the “Lost Generation”—a generation haunted by the horrors of the war, who languished in Paris, lacking any real purpose or direction. In contrast, Fitzgerald coined the term “The Jazz Age” to refer to the same period, choosing to capture the opulence and optimism of the decade rather than draw attention to the dark undercurrent that lay beneath the glittering parties. Society underwent much social change during the Jazz Age, largely because of the rise of jazz music, which brought African American musicians and dancers into mainstream culture for the first time. Other changes included the arrival of more progressive attitudes to women’s dress and sexuality, and the figure of the flapper woman—a slender and fashionable young woman dancing in a flamboyant and revealing dress—symbolized the loosening of some gender norms.

Other Books Related to Tender Is the Night

In Tender is the Night, Fitzgerald explores many of the same themes and concepts present in his renowned novel, The Great Gatsby. Both stories depict the lives of wealthy Americans during the 1920s, a decade of great economic prosperity. The stories’ respective protagonists—Dick Diver and Jay Gatsby—are also intriguingly similar. Both men embody charm, promise, and the American dream, throw reckless and decadent parties, and possess a powerful magnetism that draws others towards them. Tender is the Night and The Great Gatsby are complex romance stories that reveal the illusionary nature of the Jazz Age—an era that promised magnificent opportunities, but ultimately led to the destruction of downfall of many American men. Ernest Hemmingway, a friend of Fitzgerald’s, wrote The Sun Also Rises in 1926. It, too, is a romance story about expatriates living in Paris during the 1920s and depicts the tragedy of a generation destroyed by their own reckless decadence. Zelda Sayre Fitzgerald’s novel Save me the Waltz also captures both the glittering essence of the Jazz Age and the trauma that haunted it. Finally, although very distinct stylistically, parallels can be drawn between Tender is the Night and Vladimir Nabokov’s Lolita due to their portrayals of troubling love affairs between older men and much younger girls. While the exploitation is much more disturbing and pronounced in Lolita—the girl is only 12 years old, and her stepfather is the abuser—Fitzgerald’s romanticization of Dick and Rosemary’s relationship is also unsettling for a modern audience.
Key Facts about Tender Is the Night

Extra Credit for Tender Is the Night

Round Two. A second version of Tender is the Night was published in 1948. Following notes that Fitzgerald had written before he died, literary critic Malcolm Cowley reorganized the story to unfold in chronological order.

Passion Project. Fitzgerald worked on Tender is the Night for nine years and he was devastated when it didn’t do very well in terms of sales or critical acclaim. 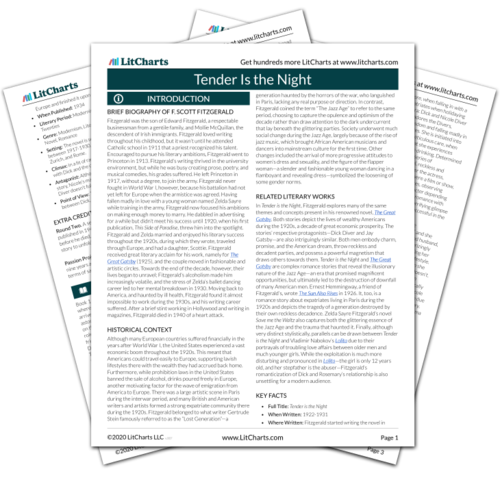 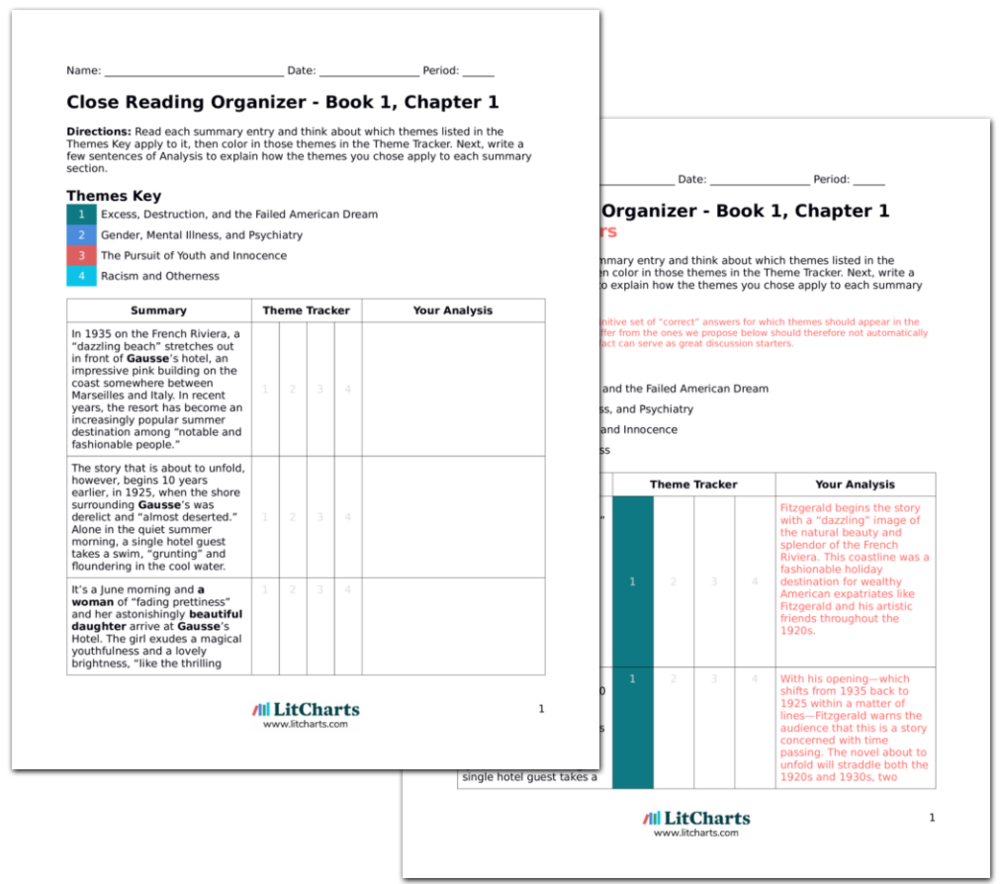