Get LitCharts A+
Mr. Compson is the father of Quentin, Caddy, and Jason. A wealthy white man, he employs Nancy and Dilsey as servants. Although Mr. Compson is relatively sympathetic towards Nancy (he lets her stay in the house one night and walks her home when she is afraid of Jesus), his attitude towards her is marked by condescension and dismissiveness. Although Mr. Compson seems to be behaving in a chivalrous way towards Nancy, he places the blame for the situation on her—claiming that Jesus would not be angry with her if only she would “leave white men alone” and not work as a prostitute. The insinuation that Nancy has led white men on demonstrates Mr. Compson’s patriarchal and racially bigoted worldview. Mr. Compson also seems to take a casual and lighthearted approach to Nancy’s belief that Jesus is stalking her. Although he walks her home several times, when he is reprimanded by Mrs. Compson he immediately gives up Nancy’s cause and tells her to walk home alone. He also chooses to leave her alone and unprotected at the end of the story, telling Nancy that he has checked the ditch and that Jesus is not in there. When Quentin looks in the ditch, however, he sees that it is too dark to tell whether anyone is hiding there or not; this suggests that Mr. Compson has lied to placate Nancy and to save himself the task of taking responsibility for her wellbeing.

The That Evening Sun quotes below are all either spoken by Mr. Compson or refer to Mr. Compson. For each quote, you can also see the other characters and themes related to it (each theme is indicated by its own dot and icon, like this one: 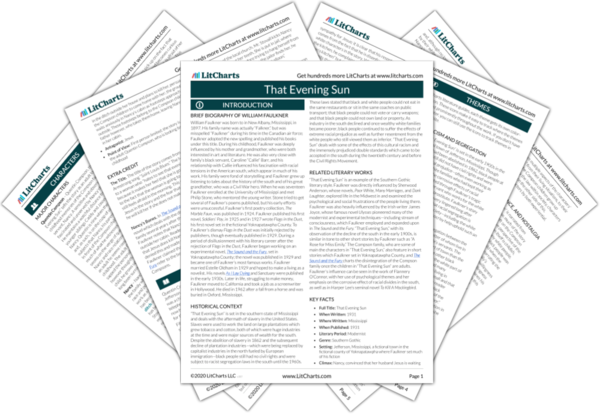 The timeline below shows where the character Mr. Compson appears in That Evening Sun. The colored dots and icons indicate which themes are associated with that appearance.

...their wives by fetching the clothes for them, but Jesus, Nancy’s husband, never did—“even before” Mr. Compson , Quentin’s father, told Jesus to stay away from the Compson’s property. Jesus never came... (full context)

...she could come and cook their breakfast. They did not cross the ditch however, because Mr. Compson had warned them to stay away from Jesus, who lived with Nancy. He recalls a... (full context)

...stays sick for a long time, so Nancy continues to cook for the family, and Mr. Compson tells Jesus to stay away from the house. One evening, after supper, Mrs. Compson remarks... (full context)

...the night, Quentin returns to the library and tells his parents that Nancy is finished. Mr. Compson goes to see what is wrong with Nancy. Caddy suggests that she might be waiting... (full context)

Mr. Compson returns and says that he is going to walk Nancy home because Nancy thinks that... (full context)

...she can just get “through the lane,” which is the darkest part of the walk. Mr. Compson asks Nancy if she can stay with Aunt Rachel, who sometimes claims to be Jesus’s... (full context)

While the children argue, Mr. Compson tries to reassure Nancy that Jesus is gone. Nancy replies that Jesus told her that... (full context)

...Mrs. Compson becomes annoyed that she is being “left alone in this big house” while Mr. Compson takes home “a frightened Negro.” Instead of walking Nancy home, the family sets up a... (full context)

...Nancy stops making the sound when the children go down and stand with her until Mr. Compson comes back. He brings Nancy’s bed up with him from the kitchen and sets it... (full context)

Caddy tells Nancy what Mr. Compson has said and asks what Nancy has done to make Jesus mad. Nancy drops her... (full context)

...confused and say that Nancy is talking “like there are five” of them or like Mr. Compson is with them. Nancy calls Jason “Mister Jason,” the way she would Mr. Compson, whose... (full context)

...unsure what is going on. Caddy goes to the door and says that she sees Mr. Compson coming. Nancy begs Caddy to ask Mr. Compson if she can come and sleep in... (full context)

Mr. Compson enters the cabin and, again, tells Nancy to go and stay with Aunt Rachel. He... (full context)

Giving up, Mr. Compson tells Nancy to lock her door and put out the lamp, but Nancy says she... (full context)

The children leave with Mr. Compson . Nancy remains sitting by the fire with the door of her cabin open and... (full context)