Download this LitChart! (PDF)
Teachers and parents! Struggling with distance learning? Our Teacher Edition on The Alchemist can help.

Welcome to the LitCharts study guide on Ben Jonson's The Alchemist. Created by the original team behind SparkNotes, LitCharts are the world's best literature guides.

A concise biography of Ben Jonson plus historical and literary context for The Alchemist.

A quick-reference summary: The Alchemist on a single page.

In-depth summary and analysis of every scene of The Alchemist. Visual theme-tracking, too.

Explanations, analysis, and visualizations of The Alchemist's themes.

The Alchemist's important quotes, sortable by theme, character, or scene.

Description, analysis, and timelines for The Alchemist's characters.

Explanations of The Alchemist's symbols, and tracking of where they appear.

An interactive data visualization of The Alchemist's plot and themes.

Jonson was born in London, England, in 1572. His father, a clergyman, died just months before Jonson was born, and his mother later remarried a bricklayer when Jonson was still a toddler. Jonson was educated at Westminster School, and while he hoped to attend the University of Cambridge, he left school to become an apprentice bricklayer. Jonson soon abandoned bricklaying and traveled to the Netherlands, where he served as a volunteer English soldier in Flanders. He returned to England in the early 1590s to work as an actor and was awarded the role of Hieronimo in an early production of Thomas Kyd’s The Spanish Tragedy. Jonson married a London woman named Ann Lewis in 1594, and while it is said that they had a rather contentious marriage, the couple had several children, including a daughter who died in infancy and a son who died of the bubonic plague when he was just seven years old. By 1597, Jonson was working exclusively as a playwright, and he staged his first successful play, Every Man in His Humour, in 1598. When James I was crowned the King of England in 1603, Jonson became a respected writer of masques, a form of courtly entertainment that involves singing, dancing, and acting. He wrote The Satyr that same year, followed by The Masque of Blackness in 1605. Jonson’s masques gained him royal favor and a pension of 60 pounds per year, and he began writing comedies, too, including Volpone in 1605, Epicoene in 1607, The Alchemist in 1610, and Bartholomew Fair in 1614. Beginning in the 1620s, Jonson’s health and productivity began to decline. He suffered multiple strokes and died on August 16, 1637, at the age of 65. Since his death, Jonson has been regarded as one of the most talented and prolific writers and theorists of the English Renaissance.
Get the entire The Alchemist LitChart as a printable PDF.
"My students can't get enough of your charts and their results have gone through the roof." -Graham S.
Download 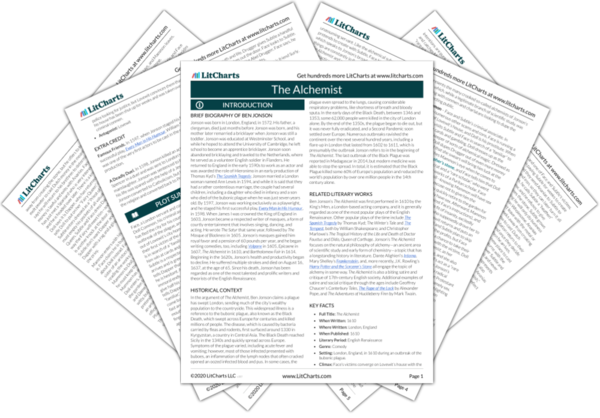 Historical Context of The Alchemist

In the argument of The Alchemist, Ben Jonson claims a plague has swept London, sending much of the city’s wealthy population to the countryside. This widespread illness is a reference to the bubonic plague, also known as the Black Death, which swept across Europe for centuries and killed millions of people. The disease, which is caused by bacteria carried by fleas and rodents, first surfaced around 1330 in Kyrgyzstan, a country in Central Asia. The Black Death reached Sicily in the 1340s and quickly spread across Europe. Symptoms of the plague varied, including acute fever and vomiting; however, most of those infected presented with buboes, an inflammation of the lymph nodes that often cracked opened an oozed infected blood and pus. In some cases, the plague even spread to the lungs, causing considerable respiratory problems, like shortness of breath and bloody sputa. In the early days of the Black Death, between 1346 and 1353, some 62,000 people were killed in the city of London alone. By the end of the 1350s, the plague began to die out, but it was never fully eradicated, and a Second Pandemic soon settled over Europe. Numerous outbreaks ravished the continent over the next several hundred years, including a flare-up in London that lasted from 1602 to 1611, which is presumably the outbreak Jonson refers to in the beginning of The Alchemist. The last outbreak of the Black Plague was reported in Madagascar in 2014, but modern medicine was able to stop the spread. In total, it is estimated that the Black Plague killed some 60% of Europe’s population and reduced the world’s population by over one million people in the 14th century alone.

Other Books Related to The Alchemist

Ben Jonson’s The Alchemist was first performed in 1610 by the King’s Men, a London-based acting company, and it is generally regarded as one of the most popular plays of the English Renaissance. Other popular plays of the time include The Spanish Tragedy by Thomas Kyd; The Winter’s Tale and The Tempest, both by William Shakespeare; and Christopher Marlowe’s The Tragical History of the Life and Death of Doctor Faustus and Dido, Queen of Carthage. Jonson’s The Alchemist focuses on the natural philosophy of alchemy—an ancient area of scientific study and early form of chemistry—a topic that has a longstanding history in literature. Dante Alighieri’s Inferno, Mary Shelley’s Frankenstein, and, more recently, J.K. Rowling’s Harry Potter and the Sorcerer’s Stone all engage the topic of alchemy in some way. The Alchemist is also a biting satire and critique of 17th-century English society. Additional examples of satire and social critique through the ages include Geoffrey Chaucer’s Canterbury Tales, The Rape of the Lock by Alexander Pope, and The Adventures of Huckleberry Finn by Mark Twain.
Key Facts about The Alchemist

Extra Credit for The Alchemist

Famous Friends. In 1597, when Jonson staged his first successful play, Every Man in His Humour, William Shakespeare was one of the very first actors to be cast in the new production.

A Deadly Duel. In 1598, Jonson killed an actor named Gabriel Spencer in a duel and was sent to London’s Newgate Prison for manslaughter. Jonson was sentenced to hang for his crime, but his life was spared with the help of a Jesuit priest. Afterward, Jonson converted to Catholicism, but he soon grew weary of the religion and converted back to Protestantism. 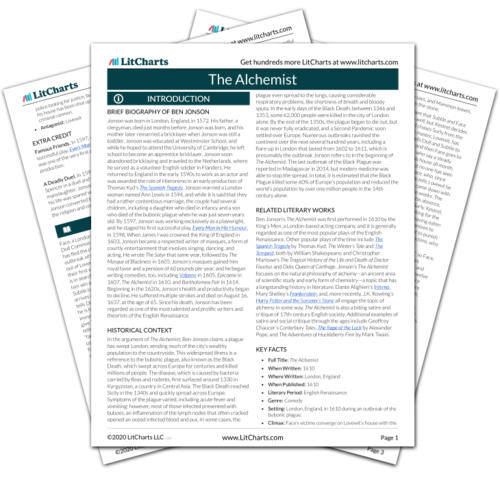 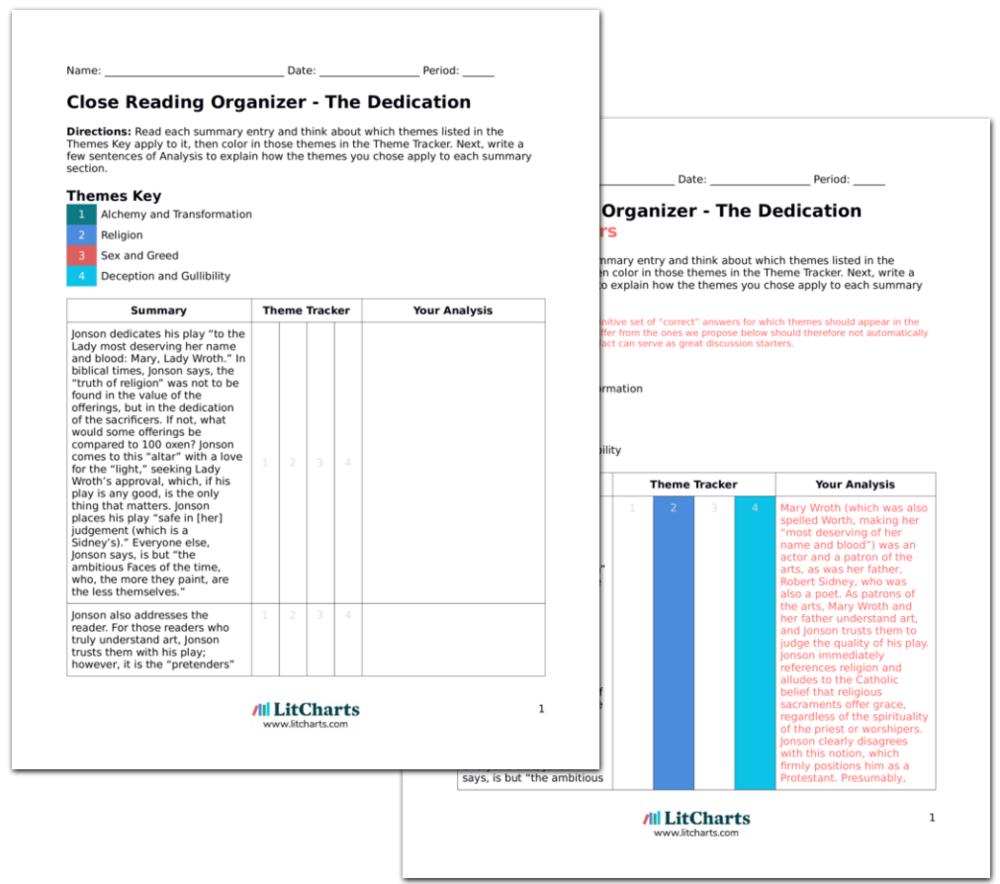