Download this LitChart! (PDF)
Teachers and parents! Struggling with distance learning? Our Teacher Edition on Autobio of Ben Franklin can help.

The Autobiography of Benjamin Franklin begins with an explanation, addressed to Franklin’s son, William Franklin, concerning why Franklin has undertaken to write his life history. He says it may be useful to his posterity (offspring) but also he hopes to gratify his own vanity. He goes on to describe some of his relations, including his grandfather, Thomas Franklin Sr., and his father, Josiah Franklin. Then Franklin begins the narrative of his life, how he was born in Boston in 1706, was briefly sent to grammar school around the age of eight, and eventually was apprenticed to his brother James Franklin as a printer.

From his earliest childhood, reading was very important to Franklin as a means of self-improvement. While working under his brother, he read frequently, adopted a vegetarian diet, and submitted several anonymous pieces of writing to his brother’s newspaper, the New England Courant. His brother published them, swelling Franklin’s pride, and, eventually, giving him the courage and ego to break his terms of service and run away, first to New York, then to Philadelphia.

Franklin found work almost immediately in Philadelphia as a journeyman printer, first for the printer Andrew Bradford, then for the printer Mr. Keimer. His brother-in-law, Robert Holmes convinced him to go back to Boston and ask his father’s blessing. He did, received it, and returned to Philadelphia with his friend John Collins, a drunk who drove Franklin into debt before moving to the West Indies. Governor Keith of Pennsylvania promised to help set Franklin up with a new printing house, and sent him to England to buy the things he needed. Franklin went, but Governor Keith failed to keep his promise. Franklin worked for printers in London to better learn his trade and earn enough money for passage back to America.

After about eighteen months, a friend Franklin made on the passage to England, Mr. Denham, offered to take Franklin on as a clerk for his merchant business. Franklin agreed and moved with Denham back to Philadelphia, but Denham soon died. Franklin returned to work for Mr. Keimer after Denham’s death, and, once he saw that Keimer planned to steal his knowledge and cease to employ him, he made an agreement with one of Keimer’s other workers, Hugh Meredith, to go into business together. The two soon opened their own printing house and Franklin, after eventually buying Meredith out of his partnership, went on to be a very successful printer and public official, founding many important civic institutions, such as the colonies’ first lending library, the academy that went on to become the university of Pennsylvania, and the first company of firemen. Along the way he describes mistakes he made, which he calls errata and believes he was able to partially correct later by living rightly.

In Part Two of his book, Franklin presents letters from friends urging him to complete the rest of his history, then he presents one of his key methods for self-improvement, The Art of Virtue—a thirteen week self-improvement cycle in which Franklin exercised thirteen virtues, focusing on one per week. He also presents his daily schedule.

Part Three resumes the narrative of Part One and includes accounts of Franklin’s military service during the French and Indian War as well as a brief account of some of his scientific experiments and publications on electricity. Franklin also uses Part Three to elaborate upon his civic works, including an explanation of how he got Philadelphia to pave and then light its streets. There is little transition between Parts Three and Four.

In Part Four, Franklin describes a diplomatic mission he undertook in London in order to argue on behalf of the Pennsylvania Assembly against the tax-free status of Pennsylvania’s proprietary governors. The mission was a partial success, and the Autobiography concludes, though it is unfinished. 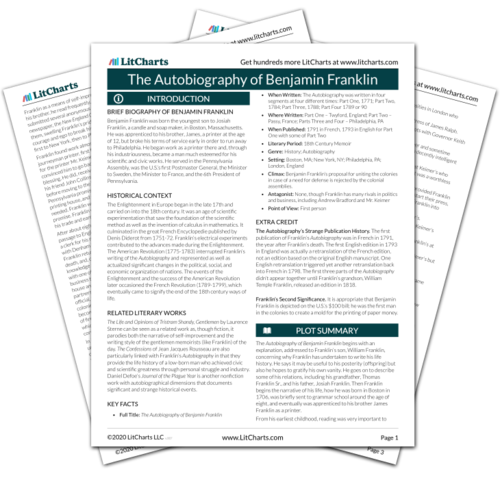 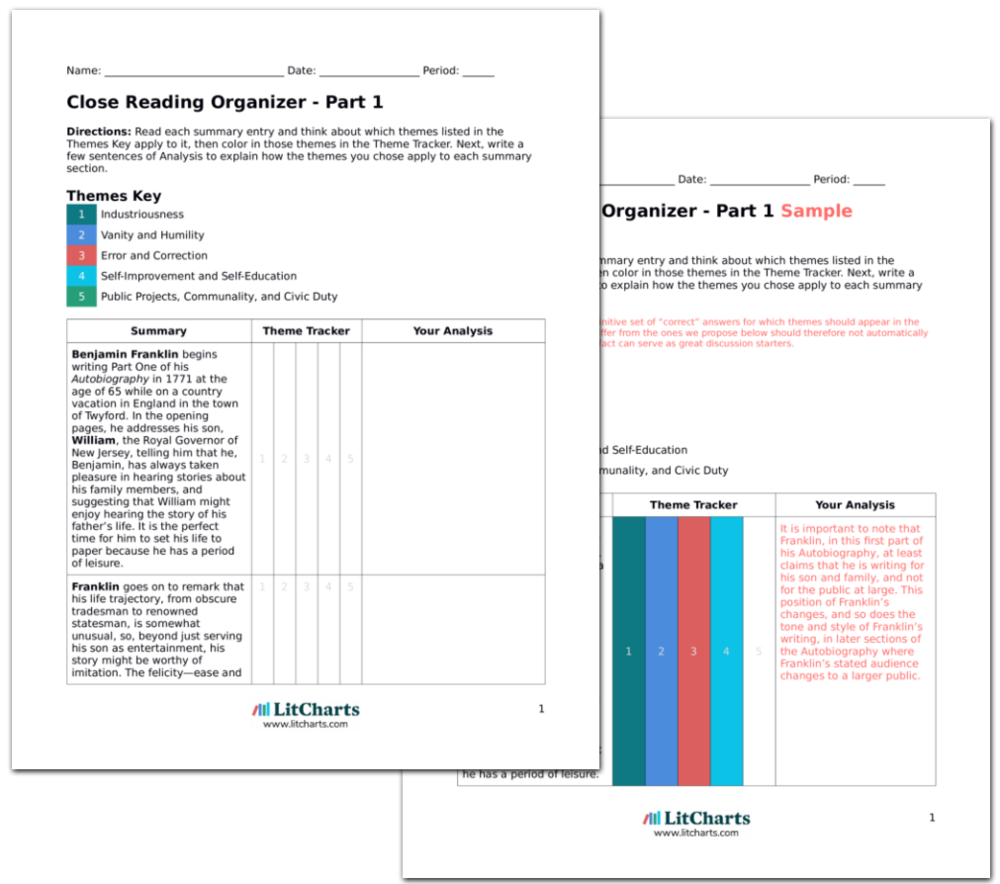