Munro explores both aging and dementia throughout the story, and particularly the ways in which memories inform—or entirely create—one’s identity. After Fiona enters Meadowlake and her recollection of her husband and even herself begin to dim, the story explores whether or not individuality can be retained as one forgets their own history. The story reveals a distinct loss of self as Fiona succumbs to dementia, yet by the end of the story Munro also demonstrates that some kernel of her identity survives. In this way, she rather paradoxically presents identity as both intimately linked to memory and divorced from it—as at once the culmination of a life’s experiences a certain immutable fact of being.

Munro uses Fiona’s shifting physical appearance to illustrate the change in her identity as her dementia—and thus loss of memory—worsens. When she first leaves her home with Grant for Meadowlake, for instance, Fiona wonders what she will wear at the facility. “I guess I’ll be dressed up all the time,” she says. “Or semi-dressed up. It’ll be sort of like in a hotel.” This suggests that she feels she will be in costume, in a sense no longer herself now that she’s no longer in the place where she built her life with her husband.

Munro also describes Fiona’s outfit carefully, writing, “she put on her golden-brown, fur-collared ski jacket, over a white turtleneck sweater and tailored fawn slacks. She was a tall, narrow-shouldered woman, seventy years old but still upright and trim […] Her hair that was light as milkweed fluff […] and she still wore it down to her shoulders, as her mother had done.” This shows Fiona’s personal sense of style and the care that she takes with her appearance—which, in turn, directly evokes her personal history by echoing that of her mother. Yet the next time Grant sees his wife—one month after her arrival at Meadowlake—the first thing he notices is her weight gain. “She looked a little puffy in the face, the flab on one cheek hiding the corner of her mouth in a way it hadn’t done before,” Munro writes. Having already established Fiona’s outward appearance as a reflection of her inward character, this shift from her previous “trim” figure suggests the erosion of her identity as she falls deeper into her dementia. Even so, Munro’s language here suggests that Fiona’s true self hasn’t been erased; instead it is “hiding.”

On another visit, Grant notices that Fiona wears “a silly wool hat and a jacket with swirls of black and purple, the sort of thing he had seen on local women at the supermarket,” and that “they had cut her hair, too. They had cut away her angelic halo.” When Grant asks, “why did they chop off your hair?” Fiona responds, “I never missed it.” Her carefully crafted individual identity continues to disappear at Meadowlake. The fact that her hair—a connection to her former self and her mother—is gone is a particularly evocative image that suggests a sharp break with her history. Fiona’s dementia thus results in the removal of the external indicators of her identity.

Beyond losing her specific sense of self, dementia seems to rob Fiona of her individuality altogether. Fiona’s caretakers patronize and infantilize the patients at Meadowlake, referring to residents as a collective “them” or “they.” Munro uses this dialogue to demonstrate that Fiona’s caretakers do not consider her an individual with personal tastes or preferences. Grant, for his part, assumes Fiona has different clothes because “they didn’t bother to sort out the wardrobes of the women who were roughly the same size and counted on the women not to recognize their own clothes anyway.”

When Grant first takes Fiona to Meadowlake, the supervisor dismissively tells him “we find that if they’re left on their own the first month they usually end up happy as clams.” The nurse Kristy later explains Fiona and Aubrey’s relationship to Grant in a similarly infantilizing manner, saying, “they get these attachments. That takes over for a while. Best buddy sort of thing. It’s kind of a phase.” Kristy is also unfazed by Fiona and Aubrey’s sorrow at Aubrey leaving Meadowlake. “They have to get over these things on their own. They’ve got short memories, usually. That’s not always so bad,” Kristy says, dismissing the emotional realities of the elderly with dementia specifically because of their inability to remember things. Together, these details continue to suggest the erosion of personal identity and subsequent autonomy that occurs via the loss of memory.

When Grant visits Aubrey’s wife, Marian, however, he begins to notice that aging individuals can still retain a sense of who they are. By the end of the story, he is able to apply this realization to Fiona, and recognize that she retains some aspects of individuality despite her dementia. For Grant, this is still expressed through the language of personal appearance. When he visits Marian, he internally critiques her outwards signs of aging while reflecting, “Very few kept their beauty whole, though shadowy, as Fiona had done.” Grant then realizes, however, that perhaps he only thinks this way about Fiona because he had known her when she was young; in other words, his vision of Fiona is invariably shaped by his own memories of the girl he fell in love with, which in a way preserve Fiona’s identity for her.

This revelation appears to make Grant more able to see Marian as an individual, rather than the aging woman he critically assessed when they first met; when he decides to return Marian’s call inviting him to a singles dance, he thinks of her breasts and her “gemstone eyes,” preserving a sense of the youthful identity of the “small-town flirt” that he sees in her. Similarly, at the end of the story Grant notes that Fiona is wearing a “seasonable but oddly short and bright dress.” The ambivalence of this judgment, as opposed to the negativity and shock expressed about her appearance earlier in the story, indicates that he has become adjusted to her changed persona. Fiona seems to have settled as well; she is aware that the dress is not hers, saying, “I never wear yellow.” Though much of Fiona has been lost, the story ends on a mildly hopeful note that an individual’s identity can be saved via the memories of those who love them. 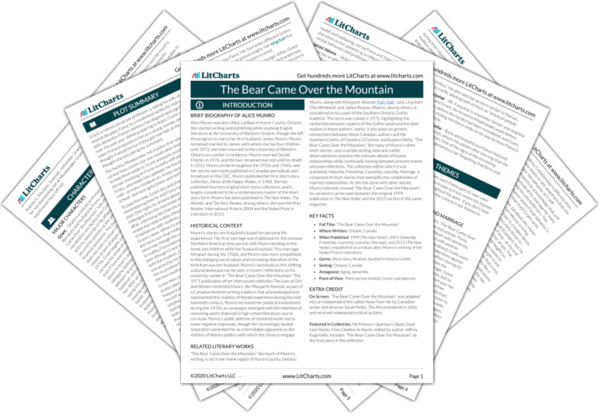 Memory, Aging, and Identity Quotes in The Bear Came Over the Mountain

“Whereas we find,” the supervisor said, “we find that if they’re left on their own they usually end up happy as clams.”

She was wearing a silly wool hat and a jacket with swirls of blue and purple, the sort of thing he had seen on local women at the supermarket.

The fact must be that they didn’t bother to sort out the wardrobes of the women who were roughly the same size. And counted on the women not to recognize their own clothes anyway.

They had cut her hair, too. They had cut away her angelic halo. On a Wednesday, when everything was more normal [...] and when Aubrey and Fiona were again in evidence, so that it was possible for Grant to have one of his brief and friendly and maddening conversations with his wife, he said to her, “Why did they chop off your hair?”

Fiona put her hands up to her head, to check.

“Why—I never missed it,” she said. 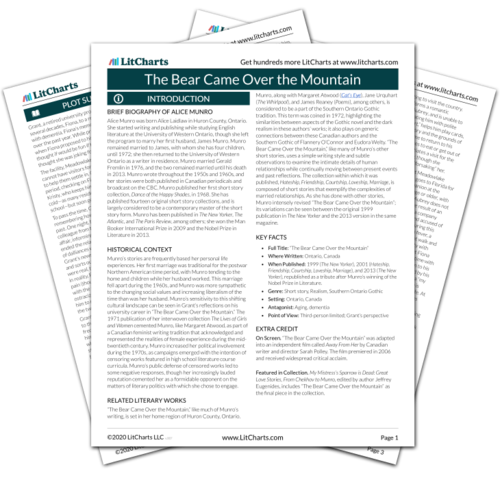 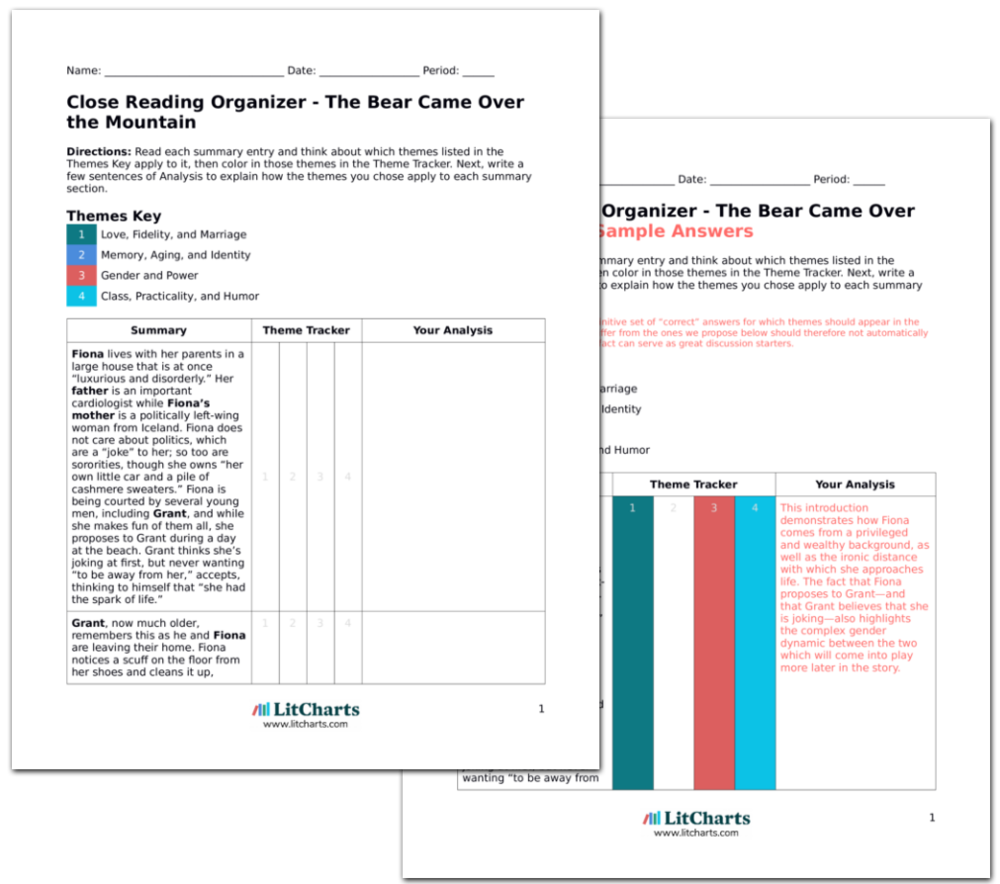