Miles Coverdale is about to abandon his comfortable bachelor pad in mid-19th-century Boston to start a new life and help launch a new rural utopian community called Blithedale. A number of young and popular intellectuals will be going there at the same time, making it a hot topic in the papers. On the night before his departure, Coverdale goes to see an exhibition of the Veiled Lady, a mesmeric phenomenon with widespread popularity in Boston at the time. At the show, Coverdale asked the Veiled Lady about the future of the project at Blithedale and he mulls over her vague answers while he walks home. An old man named Moodie stops him and says he has a favor to ask, but he abruptly changes his mind and says he’d rather ask a woman or an older man. Coverdale is confused, but he suggests that Moodie should talk to Hollingsworth, a philanthropist who is a bit older and is also about to move to Blithedale. Moodie thanks him and they part. The next day, Coverdale walks out of his apartment and joins four other men braving the snowstorm to walk to Blithedale.

By the time they reach the farmhouse at Blithedale, Coverdale is convinced he’s caught a cold. Still, he’s excited to meet Mrs. Foster, whose husband is going to teach him and the other men how to work the farm. Coverdale talks with some of the other people who have just moved to Blithedale until Zenobia—a beautiful writer and social reformer with a reputation as a women’s rights advocate—comes in to greet them. Coverdale is immediately taken in by Zenobia’s beauty and wit. He admires her sole ornament, an exotic hothouse flower in her hair. The group talks about their project until dinner.

After dinner, Zenobia comments on how strange it is that Hollingsworth is so late; just then, he knocks on the door. Coverdale lets him in and Hollingsworth surprises them by bringing in a pale young teenage girl who immediately gravitates towards Zenobia. The girl says her name is Priscilla, but she declines to share her last name. Coverdale speculates that Priscilla loves Zenobia because she has read Zenobia’s stories and he shares this theory with Zenobia, but she laughs him off and says Priscilla is just a nervous seamstress whose life has thus far been spent in a hot, dirty room in the city. Silas Foster, the farm manager, tells everyone they should get to bed because they’ll all have to wake up early.

As Coverdale predicted, he develops a bad cold overnight and the next morning he’s wracked with a painful fever and can’t get out of bed. Convinced he’s dying, Coverdale asks Hollingsworth to send him back to the city but Hollingsworth refuses. Instead, Hollingsworth takes care of Coverdale day and night throughout his illness. Coverdale appreciates this, but he also realizes that Hollingsworth is obsessed with his philanthropic goal of criminal reform—he wants to build a facility in which he can reform criminals by appealing to their latent intellectual and spiritual sensibilities. Coverdale spends a lot of time wondering about Zenobia’s sexual history because she acts more like a young wife than a chaste maiden. He is convinced that Zenobia has been married, though there’s no evidence to support this theory and he’s ashamed of himself for thinking about it so much.

On Coverdale’s first day out of bed after his illness, he finds Zenobia decorating Priscilla with twigs full of blossoms and buds. Priscilla has grown quite beautiful and much livelier since arriving at Blithedale. Coverdale, too, feels like a new man and he excitedly dives into his work. Unfortunately, he soon realizes that his early ideas about the connection between physical labor and intellectual stimulation were wrong. Instead of finding fulfillment and inspiration in the work, Coverdale is too exhausted to work on his poetry. Zenobia teases him about his future life as a farmer, but Hollingsworth says the only reason Coverdale hasn’t been able to write any poetry is because he’s not a real poet. Hollingsworth, on the other hand, still feels like a philanthropist because it’s part of his nature. Zenobia praises Hollingsworth, which makes Coverdale wonder if she and Priscilla—who spend a lot of time with Hollingsworth—are his proselytes.

One day Moodie approaches Coverdale and Hollingsworth and asks about Priscilla, and Coverdale realizes that Moodie was the one who sent Priscilla to Blithedale. They tell Moodie that Priscilla has grown very beautiful and happy, which makes Moodie happy. Moodie also asks about Zenobia and whether she’s kind to Priscilla. Coverdale doesn’t understand why Moodie would ask such a strange question, but they tell him that the two are like sisters. Hollingsworth and Moodie go to find Priscilla, but later Coverdale sees Moodie standing outside the farmhouse looking up at Priscilla’s window. Priscilla appears in the window with Zenobia, but Zenobia loses patience and nudges Priscilla away. Coverdale sees Moodie shake his fist as he walks away.

A short time later Coverdale runs into a mysterious man named Professor Westervelt in the forest. Coverdale takes an immediate disliking to him, but he still tells Westervelt where he might run into Zenobia. Later, Coverdale overhears Westervelt and Zenobia talking, but he only understands some of what they say. Westervelt whispers something in Zenobia’s ear that disgusts her, and she says that if God cares for her, then he’ll release her from this bond.

The next evening, Zenobia tells the group a story about the mysterious Veiled Lady who disappeared at the height of her popularity: a young man named Theodore took a bet that he could find out the Veiled Lady’s true identity and snuck into her drawing room to spy on her. However, when the Lady entered the room, she sensed Theodore’s presence and called him forward. He took her veil off but only caught a glimpse of her face before she disappeared. At the same time that the Veiled Lady disappeared, a young girl appeared among a group of visionaries and immediately became attached to one woman. The magician who exhibited the Veiled Lady somehow discovered this, found the woman, and convinced her to help him capture the girl, who he revealed was actually the Veiled Lady. To capture the girl, the woman must throw the veil back over the girl and say some magic words. She complied and the magician successfully recaptured the Veiled Lady. As Zenobia tells the end of the story, she throws a veil over Priscilla, who is terrified as a result.

Shortly after this event, Coverdale, Hollingsworth, Priscilla, and Zenobia go to a strange rock formation called Eliot’s Pulpit to relax. While they’re there, Zenobia starts a debate about women’s rights. She predicts that one day women will be granted equality and prove that they’re more eloquent than men. Coverdale says he wishes women would be allowed to be rulers and religious leaders. Hollingsworth, however, says that a woman’s proper place is at a man’s side. Any woman who tries to go beyond that is monstrous and if too many women rise up to demand social change in their favor then Hollingsworth says he would use force to push them back into their sphere. Coverdale is horrified and thinks Zenobia will argue, but instead she tearfully tells Hollingsworth that women will willingly be what he says they should be if men are good and manly. A few days later Hollingsworth tries to convince Coverdale to join his project to open a criminal reform center in Blithedale, but Coverdale refuses. The two argue and Coverdale decides to leave.

Back in Boston, Coverdale stays in a dingy hotel far from his old haunts. The day after he arrives, he notices Zenobia, Westervelt, and Priscilla are staying in the boardinghouse across from his hotel. Westervelt and Zenobia catch Coverdale spying on them through their window and lower the curtain. The next day Coverdale goes over to see them, but Zenobia is mad that Coverdale is being so nosy. Westervelt appears in the room and says they all must leave. Coverdale frantically asks Priscilla if she’s there by choice and she tells him she has no free will as she walks out.

Coverdale seeks out Moodie to ask him about Priscilla and Zenobia. He learns that they’re half-sisters—Zenobia is Moodie’s daughter fromhis first marriage and Priscilla is from his second. Zenobia was raised by a wealthy uncle, but Moodie raised Priscilla, who developed a reputation for being a clairvoyant. Before going to Blithedale, a magician began visiting Priscilla, but nobody understood why because Priscilla was so homely. Apparently, Priscilla went to Blithedale to meet Zenobia, who had no idea that she had a half-sister.

Coverdale goes to the Veiled Lady exhibition after hearing that the Lady has reappeared. He runs into Hollingsworth there, but Hollingsworth is apparently still mad at Coverdale. Shortly after the magician, Westervelt, begins the show, Hollingsworth goes onto the stage and simply says, “Come!” Priscilla pulls the veil off and leaves with Hollingsworth. Coverdale decides to return to Blithedale because he wants to know what’s happened between Zenobia, Priscilla, and Hollingsworth since he left. He finds the three at Eliot’s Pulpit and it’s clear that they’ve reached some sort of crisis. Zenobia says she’s on trial for her life and scolds Hollingsworth for being so self-absorbed. Coverdale infers that they’ve been discussing Zenobia’s past, but they don’t return to the subject. Zenobia asks Hollingsworth if he loves Priscilla and he says that he does now. Priscilla leaves with him.

Zenobia is devastated and she tells Coverdale that she must leave Blithedale. She assures him that she’ll be fine but she takes off her flower and tells him to tell Hollingsworth that he’s killed her. She leaves and Coverdale falls asleep in the forest. When he wakes up, he has a bad feeling about Zenobia and goes to get Hollingsworth and Silas. Coverdale shows them Zenobia’s handkerchief and leads them to where he found it near the pond. The men fish around in the water for a while before they discover Zenobia’s body at the bottom of the pond. They hold a funeral, which Westervelt attends. Coverdale tries to get him to reveal his connection to Zenobia, but Westervelt says it doesn’t matter anymore.

A few years later, Coverdale gives in to his curiosity and seeks out Priscilla and Hollingsworth, who are apparently married. Consumed with guilt and haunted by the memory of how he treated Zenobia, Hollingsworth gave up his plans for criminal reform. Coverdale forgives him and leaves—he never sees either of them again. Coverdale mourns that Blithedale proved to be such a failure. He knows all the original members have left, although some people who came later might still be there. Coverdale’s own life has been unremarkable and lonely. He decides to reveal a secret that he’s kept throughout his narrative that might explain his obsessive behavior: he was in love with Priscilla. 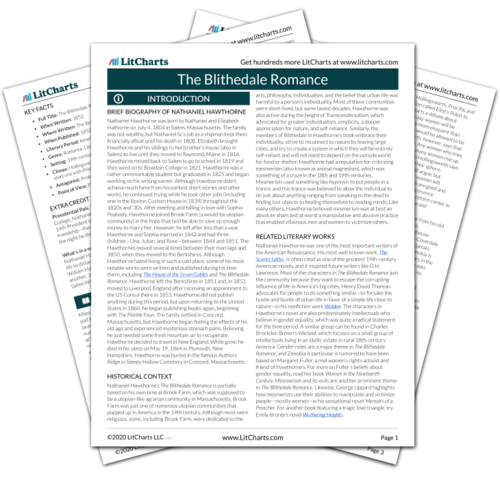 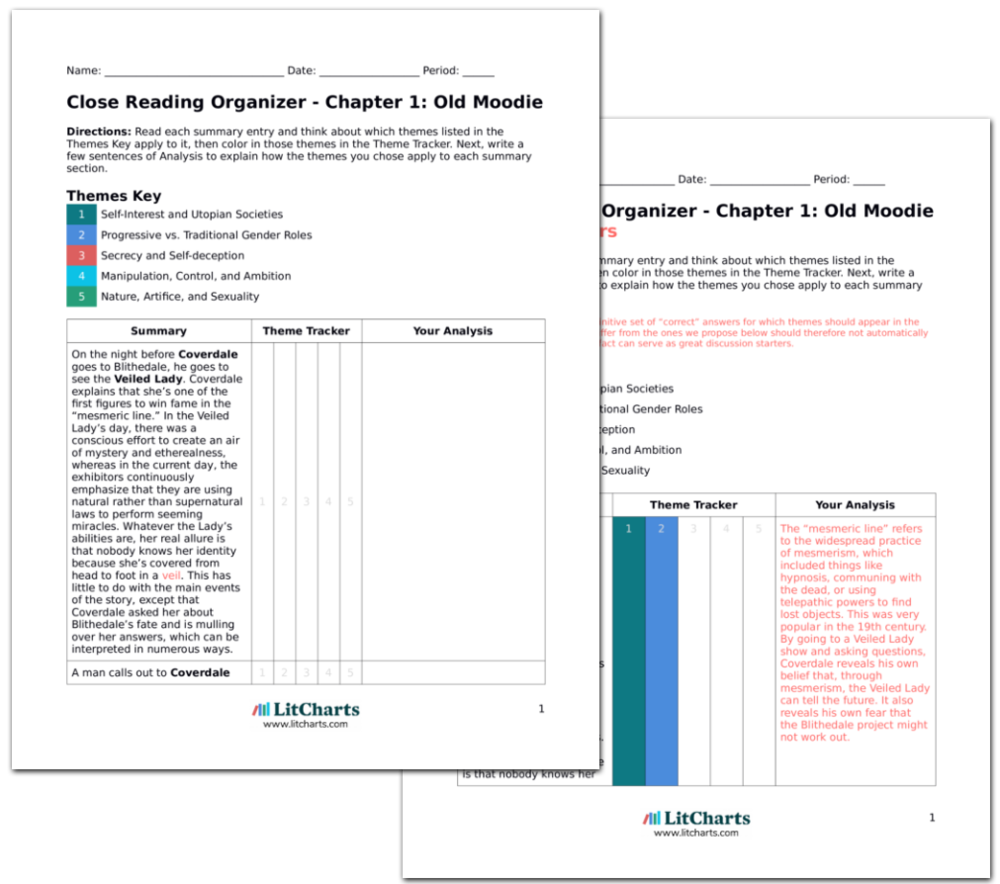