Each of the book’s ten tales contains some kind of “bloody chamber,” though the most obvious is the torture room of the titular story. The bloody chamber is a place of both violence and enlightenment, as the first heroine discovers the true nature of her husband’s desires and her own inevitable fate in this room. Other “bloody chambers” include the Beast’s room in “The Tiger’s Bride,” the blood-filled hole in “The Snow Child,” and the grandmother’s house in “The Werewolf” and “The Company of Wolves.” The combination of violence and enlightenment in these places usually takes a sexual form, as in the first bloody chamber the torture is part of the Marquis’ sadistic desires. Because of this, the “bloody chambers” of the book act as symbols of a woman’s vagina or womb, and the blood is associated with menstruation or the loss of virginity. Throughout the stories Carter associates sexual awakening with violence, but also with a kind of enlightenment or transformation, as in the chamber of “The Company of Wolves,” where the girl changes from victim to devourer through seducing the wolf. Thus the “bloody chamber” of a woman’s body becomes the site of both oppression and metamorphosis.

The The Bloody Chamber quotes below all refer to the symbol of Bloody Chambers. For each quote, you can also see the other characters and themes related to it (each theme is indicated by its own dot and icon, like this one:

“There is a striking resemblance between the act of love and the ministrations of a torturer,” opined my husband’s favourite poet; I had learned something of the nature of that similarity on my marriage bed. And now my taper showed me the outlines of a rack. There was also a great wheel… And – just one glimpse of it before my little flame caved in and I was left in absolute darkness – a metal figure, hinged at the side, which I knew to be spiked on the inside and to have the name: the Iron Maiden.

The Company of Wolves Quotes

She stands and moves within the invisible pentacle of her own virginity. She is an unbroken egg; she is a sealed vessel; she has inside her a magic space the entrance to which is shut tight with a plug of membrane; she is a closed system; she does not know how to shiver. She has her knife and she is afraid of nothing.

Unlock with LitCharts A+
Get the entire The Bloody Chamber LitChart as a printable PDF.
"My students can't get enough of your charts and their results have gone through the roof." -Graham S.
Download 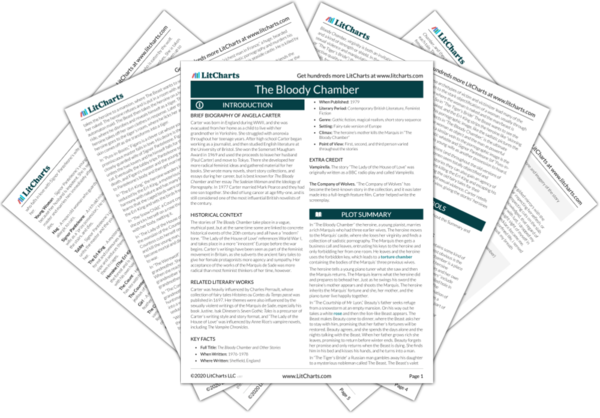 The timeline below shows where the symbol Bloody Chambers appears in The Bloody Chamber. The colored dots and icons indicate which themes are associated with that appearance.

...heroine lights another match and approaches a huge, ornate coffin at the center of the torture chamber . Inside she sees the embalmed body of the opera singer, the Marquis’ first wife.... (full context)

...women. She picks up the key and flees the bloody chamber. She runs through the house, afraid to return to the bedroom and not trusting any of the servants or even... (full context)

The heroine is suddenly overcome by her revelation in the “ bloody chamber ” and Jean-Yves’ innocent humanity, and she faints. When she awakes Jean-Yves tends to her,... (full context)

...of it to charity. The castle is now a school for the blind, and the bloody chamber has been sealed and buried. The heroine has started a music school outside Paris, and... (full context)

The heroine finds her way to The Beast’s room and knocks on his door. There is no answer, but the valet appears, naked himself... (full context)

...ushers the two inside, sneezing at Figaro and saying the rats are in her mistress’s room. They all go into the young woman’s room and the master pretends there is a... (full context)

...the huntsman to win the contest and kiss her. Meanwhile the huntsman reaches the grandmother’s house. She is in bed with her Bible when he knocks and she invites him in.... (full context)

...and gets in the bed. The child arrives and the wolf invites her into the room. At first she is disappointed that the huntsman didn’t get their first, but then she... (full context)