Download this LitChart! (PDF)
Teachers and parents! Struggling with distance learning? Our Teacher Edition on The Bronze Bow can help.

Welcome to the LitCharts study guide on Elizabeth George Speare's The Bronze Bow. Created by the original team behind SparkNotes, LitCharts are the world's best literature guides.

A concise biography of Elizabeth George Speare plus historical and literary context for The Bronze Bow.

A quick-reference summary: The Bronze Bow on a single page.

In-depth summary and analysis of every chapter of The Bronze Bow. Visual theme-tracking, too.

Explanations, analysis, and visualizations of The Bronze Bow's themes.

Description, analysis, and timelines for The Bronze Bow's characters.

Explanations of The Bronze Bow's symbols, and tracking of where they appear.

An interactive data visualization of The Bronze Bow's plot and themes.

Elizabeth George was born and grew up outside of Boston, where she enjoyed a happy childhood—she had a large, loving extended family and spent much time exploring both the city and the outlying countryside. Elizabeth first discovered her love of writing stories as a child. After earning a Bachelor’s degree from Smith College and a Master’s in English from Boston University, she taught high school English for a few years. Though she always wanted to attempt writing as a career, marriage and children (she had two, Alden, Jr., and Mary, with her husband Alden Speare) occupied most of her time in the 1940s and early 1950s. After getting articles published in several women’s and parents’ magazines, she published her first book, Calico Captive, in 1957. Her second, The Witch of Blackbird Pond, in 1958, won numerous awards, including the Newbery Medal, an award given by a division of the American Library Association for a “distinguished contribution” to American children’s literature. The Bronze Bow and The Sign of the Beaver also earned Newbery accolades, putting Speare on a short list of multiple Newbery winners. In 1989, she was also awarded the Laura Ingalls Wilder Medal for her achievements in children’s literature.
Get the entire The Bronze Bow LitChart as a printable PDF.
"My students can't get enough of your charts and their results have gone through the roof." -Graham S.
Download 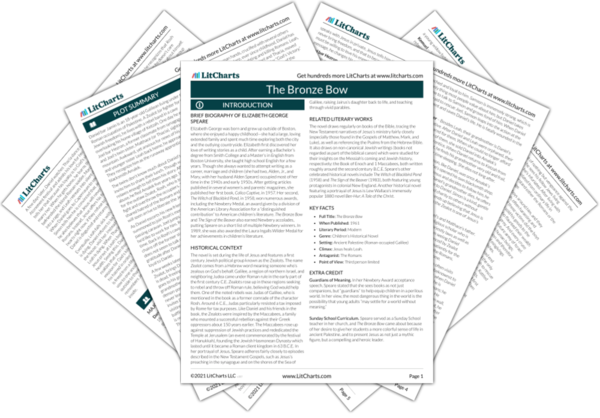 Historical Context of The Bronze Bow

The novel is set during the life of Jesus and features a first century Jewish political group known as the Zealots. The name Zealot comes from a Hebrew word meaning someone who’s zealous on God’s behalf. Galilee, a region of northern Israel, and neighboring Judea came under Roman rule in the early part of the first century C.E. Zealots rose up in these regions seeking to rebel and throw off Roman rule, believing God would help them. One of the noted rebels was Judas of Galilee, who is mentioned in the book as a former comrade of the character Rosh. Around 6 C.E., Judas particularly resisted a tax imposed by Rome for tax purposes. Like Daniel and his friends in the book, the Zealots were inspired by the Maccabees, a family who mounted a successful rebellion against their Greek oppressors about 150 years earlier. The Maccabees rose up against suppression of Jewish practices and rededicated the Temple at Jerusalem (an event commemorated by the festival of Hanukkah), founding the Jewish Hasmonean Dynasty which lasted until it became a Roman client kingdom in 63 B.C.E. In her portrayal of Jesus, Speare adheres fairly closely to episodes described in the New Testament Gospels, such as Jesus’s preaching in the synagogue and on the shores of the Sea of Galilee, raising Jairus’s daughter back to life, and teaching through vivid parables.

Other Books Related to The Bronze Bow

The novel draws regularly on books of the Bible, tracing the New Testament narratives of Jesus’s ministry fairly closely (especially those found in the Gospels of Matthew, Mark, and Luke), as well as referencing the Psalms from the Hebrew Bible. It also draws on non-canonical Jewish writings (books not regarded as part of the biblical canon) which were studied for their insights on the Messiah’s coming and Jewish history, respectively: the Book of Enoch and 1 Maccabees, both written roughly around the second century B.C.E. Speare’s other celebrated historical novels include The Witch of Blackbird Pond (1958) and The Sign of the Beaver (1983), both featuring young protagonists in colonial New England. Another historical novel featuring a portrayal of Jesus is Lew Wallace’s immensely popular 1880 novel Ben-Hur: A Tale of the Christ.
Key Facts about The Bronze Bow

Extra Credit for The Bronze Bow

Guardians of Meaning. In her Newbery Award acceptance speech, Speare stated that she sees books as not just companions, but “guardians” to help equip children in a perilous world. In her view, the most dangerous thing in the world is the possibility that young adults “may settle for a world without meaning.”

Sunday School Curriculum. Speare served as a Sunday School teacher in her church, and The Bronze Bow came about because of her desire to give her students a more colorful sense of life in ancient Palestine, and to present Jesus as not just a mythic figure, but a compelling and heroic leader. 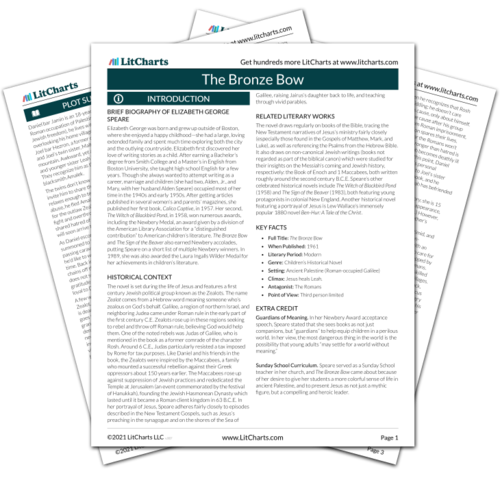 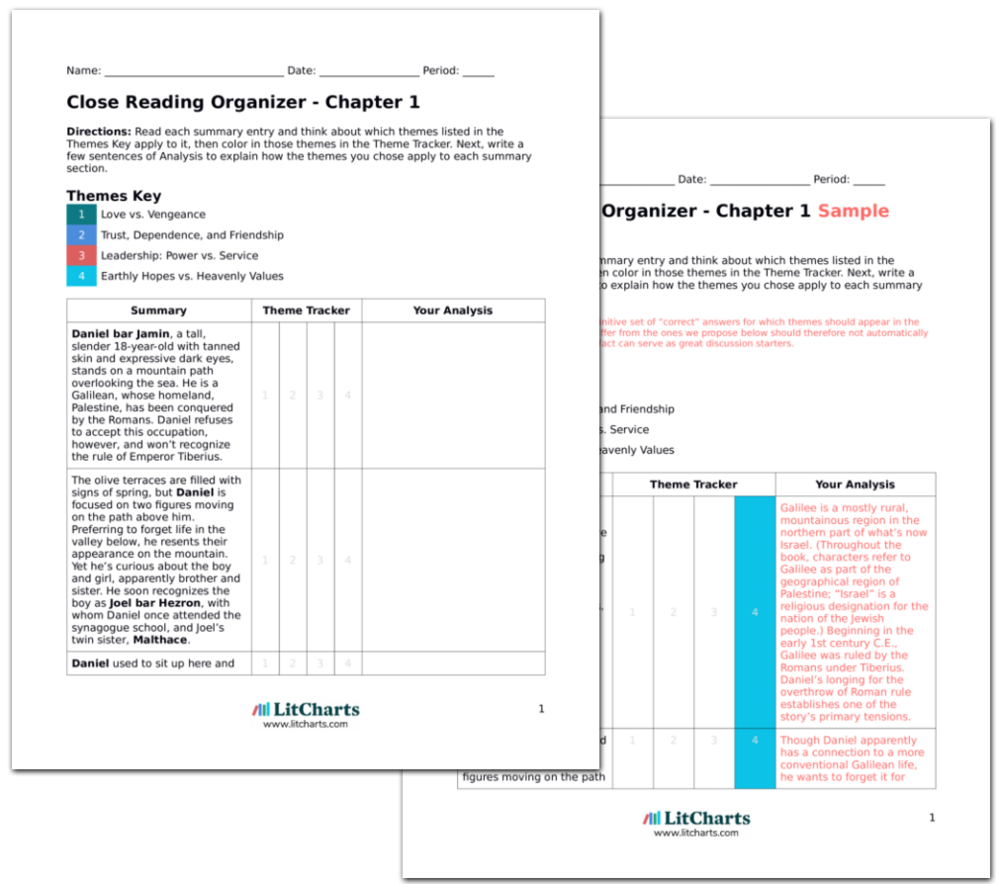