It is the start of the school year at Trinity High, an all-boys’ school in New England. Freshman Jerry Renault subjects himself to football tryouts—though the process is violent and Jerry gets “murdered” by the other, bigger recruits, he feels a sense of pride and hope that he will make the team. What he doesn’t know is that in the bleachers above the field, two prominent members of the school’s secret society, the Vigils, are watching him. Archie Costello and his fellow Vigils member Obie watch over the tryouts; Archie is selecting students for his legendary “assignments” while Obie, the group’s secretary, writes down their names and assigned tasks. Archie is a cruel, nasty boy, and Obie hates that Archie’s power as the feared assigner of the Vigils gives him free reign to do as he pleases. Archie assigns a kid called The Goober to “Brother Eugene’s room,” and for Jerry Renault—who, Obie tells him, lost his mother to cancer last spring—Archie chooses “chocolates.”

On the way home from tryouts, Jerry has an encounter with a hippie who hangs out in a park across the street from the bus stop. The hippie accuses Jerry of staring at him and his friends; though Jerry denies doing so, the hippie berates Jerry, calling him a “square boy.” The exchange rattles Jerry. Meanwhile, Brother Leon, the Assistant Headmaster of the school, nervously attempts to recruit Archie—and, by association, the Vigils—to help him with the school’s yearly chocolate sale. Brother Leon has secured a massive amount of chocolate, and wants for each student at the school to double his quote from previous years and sell fifty boxes at an increased price of two dollars a box. Brother Leon knows this is a tall order, and wants the Vigils’ help in getting students excited about the sale. Archie tells Brother Leon that he can count on the Vigils.

In the days leading up to the chocolate sale, The Goober completes his assignment—loosening the screws on all the furniture in Brother Eugene’s classroom, leading to total bedlam as it all falls apart the next day when students take their seats—while Jerry contemplates his father’s humdrum existence and, by proxy, his own. On the first day of the chocolate sale, as Brother Leon calls roll and asks each student to accept his quota of fifty chocolates, Jerry refuses to accept his boxes, much to Brother Leon’s dismay. The other Trinity boys struggle to sell their chocolates, while the sale’s treasurer, Brian Cochran, begins tabulating the abysmal totals, afraid of the dark and seemingly unstable Brother Leon’s wrath. In a series of run-ins with school bully Emile Janza, it becomes clear that Archie is blackmailing Janza by lording a compromising photograph over the bully. Brother Leon, meanwhile, is blackmailing his own students—namely the smart but meek David Caroni, who reveals that Jerry’s refusal to accept the chocolates is widely-known to be part of a Vigils assignment. Caroni assures Leon that the assignment is only going to last ten days, and Leon delights in the realization that the next day is, coincidentally, the tenth day of the sale.

The next morning, though, Jerry still does not accept his chocolates. He himself doesn’t know the reason for his resistance—he chides himself for extending the torturous friction with Brother Leon, even as his fellow classmates congratulate him for taking a stand against the boring, pointless chocolate sale. Jerry is motivated at least in part by a poster on the inside of his locker, which asks, “Do I dare disturb the universe?” and, as the days go by, he continues refusing to accept his boxes. Throughout Trinity, the students grow increasingly fed up with the chocolate sale. Meanwhile, Archie and Obie worry that Jerry’s refusal to end his “assignment” will reflect poorly on the Vigils, and Archie decides to summon Jerry to another Vigils meeting to deal with him. The Goober quits football, telling Jerry that there is “something rotten” at Trinity.

As chocolate sales plummet, Brother Leon menacingly warns Archie that if the sale tanks, he will see to it that the Vigils do, too. Jerry arrives at a Vigils meeting, where Archie demands to know why Jerry won’t sell the chocolates. Jerry refuses to answer, and Archie essentially begs Jerry to sell the chocolates. Obie is surprised to see the powerful Archie ask for anything at all, and secretly hopes that Archie’s reign is coming to an end. As posters both condemning the chocolate sale and the Vigils begin cropping up in the school, the president of the Vigils, a senior named Carter, urges Archie to do something to rehabilitate the Vigils’ image. Archie suggests that the Vigils throw their full weight behind the chocolate sale—doing so will both please Leon and delegitimize Jerry Renault, who will be marked as an outsider once the whole school is selling chocolates left and right.

Bad things begin happening to Jerry. His own teammates attack him during football practice; he receives prank phone calls from a disembodied voice that chuckles maniacally; his locker is vandalized and his inspiration poster destroyed; his homework assignments are stolen off his teachers’ desks, threatening his grades. In spite of all this, Jerry still thinks it is worth it to try and “disturb the universe.” Chocolate sales begin soaring. Brian Cochran knows something fishy is going on, as seniors and Vigils members are bringing in large wads of cash with instructions on who to attribute the sales to, but he is enjoying his own nascent popularity for the first time ever, and does not speak up.

Jerry is assaulted after school by Emile Janza, who taunts him and calls him a “fairy” and a “queer” before summoning a bunch of neighborhood boys to beat Jerry up and leave him bloody on the ground. That night, when the injured Jerry returns home, he is harassed by voices on the street calling his name and the endless ringing of the telephone. The next day at school, Jerry is treated like a ghost—not just students, but teachers, too, begin freezing Jerry out entirely. He is grateful for the silent treatment, but when a group of boys tries to push him down the stairs, he realizes his trial by fire is not over yet. Finally, the chocolate sale ends—Leon is relieved when Brian Cochran tells him that, somehow, every single box of chocolates except for fifty have sold. Archie and Obie cook up a plot to raffle off the fifty remaining boxes to the student body—a raffle like “no other in any school’s history.”

On the night of the raffle, the Vigils construct a makeshift boxing ring on the football field. Having ensured that the brothers will not be present, the Vigils are free to stage a cruel and unusual event: in raffling off the fifty unsold boxes and a cash prize, the Vigils have allowed each member of the student body to submit as their “ticket” an instruction for either Jerry or Emile Janza, who will be facing off in a boxing match to settle the score between them. As they wait for the match to start, Jerry and Janza are both nervous—Jerry realizes that he has made a mistake in allowing Archie to talk him into the chance at ultimate revenge, while Janza worries that Archie will expose the compromising photo of him masturbating in the school’s bathroom.

Before the match begins, Obie brings out the Vigils’ mysterious black box for the whole student body to see—as the assigner, Archie must reach into the box with each assignment and pull out a marble. If the marble is white, the original assignee completes their assignment; if the marble is black, Archie must take it on himself. Obie and Carter make Archie draw from the box twice—once for Jerry and once for Janza—but Archie draws a white marble each time. As the match begins, The Goober arrives. He hears the crowd chanting “Kill ‘em” over and over, and becomes worried for Jerry. As the match starts, Jerry and Janza strike one another according to the instructions on the “tickets” Carter pulls from a box; when Carter, caught up in the excitement, reads off an instruction for Janza to strike an illegal blow to Jerry’s groin, Jerry defends himself, enraging Janza. Janza begins beating Jerry to a pulp as the crowd cheers him on. Obie looks up into the stands and sees Brother Leon watching the carnage unfold gleefully. Without warning, the stadium lights go out. Archie runs for the utility building, hoping to reset the electricity and let the match finish, but once there he encounters Brother Jacques, who has come to stop the madness.

Jerry awakes to find The Goober holding him—he wishes he could tell The Goober that he now realizes he was wrong to try “disturbing the universe,” but is in so much pain that he cannot speak. As an ambulance arrives, Brother Jacques tries to get the story out of Archie—but Brother Leon comes to Archie’s defense. As Brother Jacques, frustrated, stalks away to see to Jerry, Archie basks in the knowledge that, with Brother Leon on his side, it is going to be a great year. After the madness dies down, Archie and Obie sit in the bleachers. Obie wishes aloud for another “kid like Renault” to come along and give Archie his just desserts, but Archie seems not to notice. Instead, he tells Obie he is hungry, and asks if Obie has any of the unsold chocolates—Obie says they were all stolen when the lights went out. The two sit in silence before making their way home. 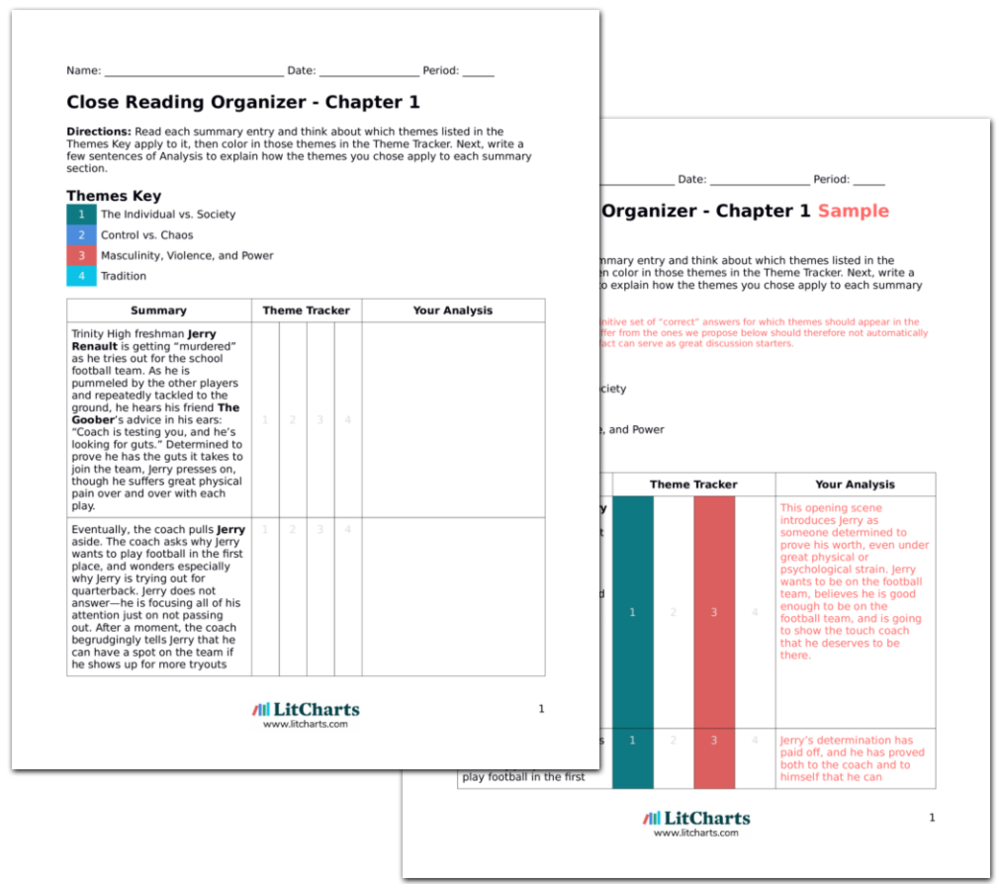