Download this LitChart! (PDF)
Teachers and parents! Struggling with distance learning? Our Teacher Edition on The Circuit can help.

Welcome to the LitCharts study guide on Francisco Jiménez's The Circuit. Created by the original team behind SparkNotes, LitCharts are the world's best literature guides.

A concise biography of Francisco Jiménez plus historical and literary context for The Circuit.

A quick-reference summary: The Circuit on a single page.

In-depth summary and analysis of every chapter of The Circuit. Visual theme-tracking, too.

Explanations, analysis, and visualizations of The Circuit's themes.

The Circuit's important quotes, sortable by theme, character, or chapter.

Description, analysis, and timelines for The Circuit's characters.

Explanations of The Circuit's symbols, and tracking of where they appear.

An interactive data visualization of The Circuit's plot and themes.

Francisco Jiménez was born in 1943 in Tlaquepaque, Mexico. His family came to the United States illegally when he was four years old, and they worked as migrant laborers at various farms in California. Jiménez loved learning and yearned for an education, but he was only able to attend school sporadically, since he was expected to work in the fields during the busy times of the harvest. Still, he tried to teach himself as much as possible and studied during the short breaks he got while working in the fields. When Jiménez was in junior high school, immigration agents swept his school and caught him, and they deported his family back to Mexico. Jiménez documents these experiences from his early life in his autobiographical novel The Circuit. Jiménez’s family later returned to the United States legally, and this time, they settled down in the town of Santa Maria, California. In high school, Jiménez did extremely well and won scholarships to attend Santa Clara University, where he got a BA in Spanish. He then went to Columbia University, where he got his PhD in Latin American literature. Jiménez went on to become a professor at Santa Clara University, where he won many awards for his teaching. In 1997, he published The Circuit, which won numerous awards, including the Boston Globe-Horn Book Award for Fiction and the California Library Association’s 10th Annual John and Patricia Beatty Award. Jiménez has written several other books, including an award-winning picture book for young children called La Mariposa. He also published three sequels to The Circuit, which document the later events of his life. Jiménez has a wife, Laura, and three children. He’s currently a professor at Stanford University.
Get the entire The Circuit LitChart as a printable PDF.
"My students can't get enough of your charts and their results have gone through the roof." -Graham S.
Download 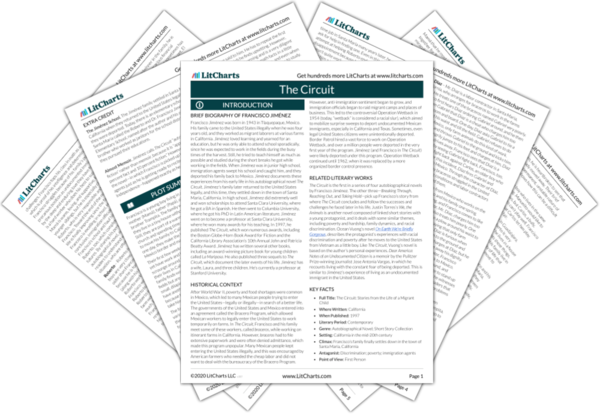 Historical Context of The Circuit

After World War II, poverty and food shortages were common in Mexico, which led to many Mexican people trying to enter the United States—legally or illegally—in search of a better life. The governments of the United States and Mexico entered into an agreement called the Bracero Program, which allowed Mexican workers to legally enter the United States to work temporarily on farms. In The Circuit, Francisco and his family meet some of these workers, called braceros, while working on itinerant farms in California. However, braceros had to file extensive paperwork and were often denied admittance, which made this program unpopular. Many Mexican people kept entering the United States illegally, and this was encouraged by American farmers who needed the cheap labor and did not want to deal with the bureaucracy of the Bracero Program. However, anti-immigration sentiment began to grow, and immigration officials began to raid migrant camps and places of business. This led to the controversial Operation Wetback in 1954 (today, “wetback” is considered a racial slur), which aimed to mobilize surprise sweeps to deport undocumented Mexican immigrants, especially in California and Texas. Sometimes, even legal United States citizens were unintentionally deported. Border Patrol hired a vast force to work on Operation Wetback, and over a million people were deported in the very first year of the program. Jiménez (and Francisco in The Circuit) were likely deported under this program. Operation Wetback continued until 1962, when it was replaced by a more organized border control presence.

Other Books Related to The Circuit

The Circuit is the first in a series of four autobiographical novels by Francisco Jiménez. The other three—Breaking Through, Reaching Out, and Taking Hold—pick up Francisco’s story from where The Circuit concludes and follow the successes and challenges he faced later in his life. Justin Torres’s We, the Animals is another novel composed of linked short stories with a young protagonist, and it deals with some similar themes, including poverty and hardship, family dynamics, and racial discrimination. Ocean Vuong’s novel On Earth We’re Briefly Gorgeous, describes the protagonist’s experiences with racial discrimination and poverty after he moves to the United States from Vietnam as a little boy. Like The Circuit, Vuong’s novel is based on the author’s personal experiences. Dear America: Notes of an Undocumented Citizen is a memoir by the Pulitzer Prize-winning journalist Jose Antonia Vargas, in which he recounts living with the constant fear of being deported. This is similar to Jiménez’s experience of living as an undocumented immigrant in the United States.
Key Facts about The Circuit

Extra Credit for The Circuit

The Jiménez School. The Jiménez family settled in Santa Maria, California when they returned to the United States legally after they were deported. Today, there is an elementary school in Santa Maria called the Roberto and Dr. Francisco Jiménez Elementary School, named after the author and his older brother who worked as janitors for the school district while they pursued their educations.

Almost Memoir. Jiménez calls The Circuit “autobiographical fiction” rather than memoir, because it is “approximately 90 percent fact and 10 percent fiction.” However, the final scene of the novel—in which Francisco is picked up by immigration agents just as he is getting ready to recite the Declaration of Independence—happened exactly as he describes in the book. 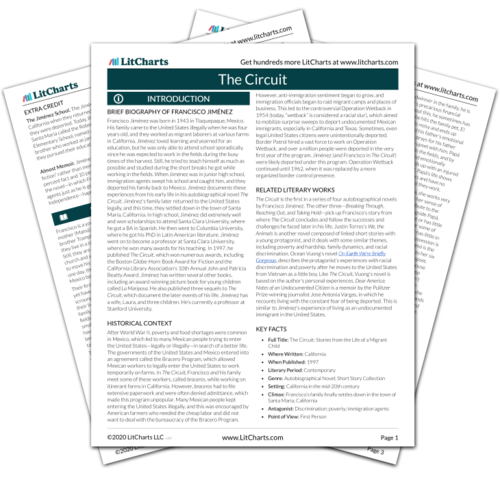 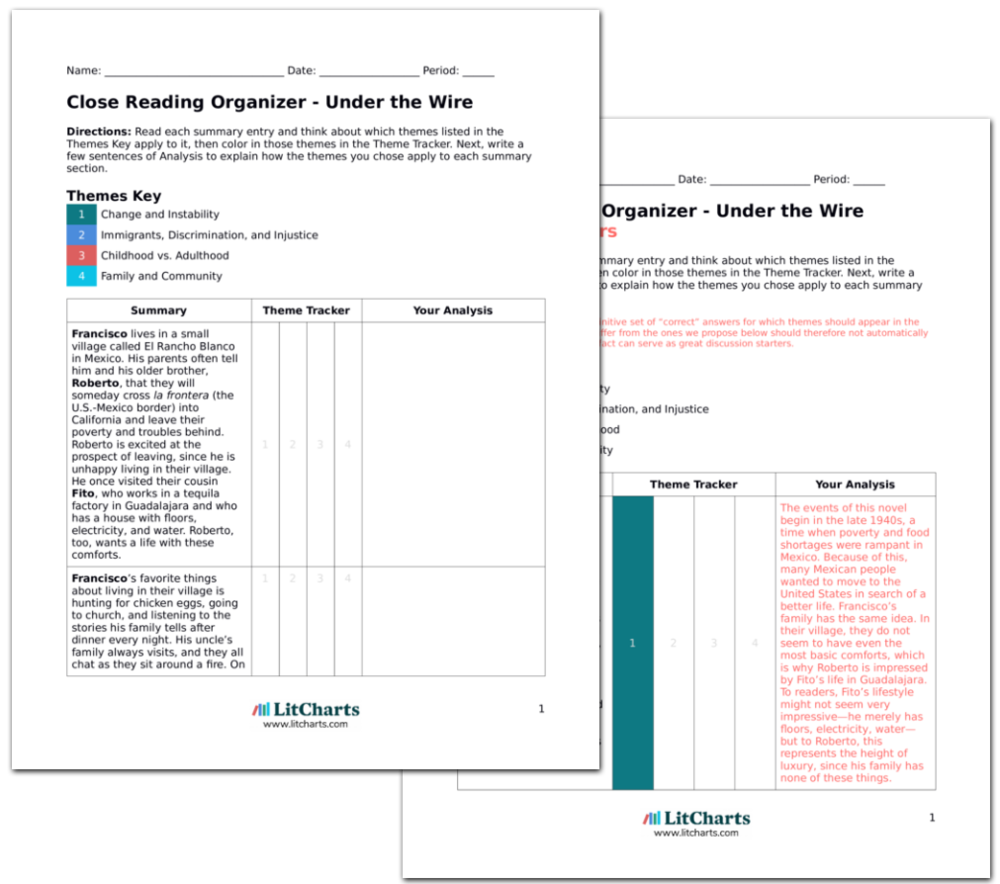