Download this LitChart! (PDF)
Teachers and parents! Struggling with distance learning? Our Teacher Edition on The City of Ember can help.

Welcome to the LitCharts study guide on Jeanne DuPrau's The City of Ember. Created by the original team behind SparkNotes, LitCharts are the world's best literature guides.

The City of Ember: Introduction

A concise biography of Jeanne DuPrau plus historical and literary context for The City of Ember.

The City of Ember: Plot Summary

A quick-reference summary: The City of Ember on a single page.

In-depth summary and analysis of every chapter of The City of Ember. Visual theme-tracking, too.

The City of Ember: Themes

Explanations, analysis, and visualizations of The City of Ember's themes.

The City of Ember: Quotes

The City of Ember's important quotes, sortable by theme, character, or chapter.

The City of Ember: Characters

Description, analysis, and timelines for The City of Ember's characters.

The City of Ember: Symbols

Explanations of The City of Ember's symbols, and tracking of where they appear.

The City of Ember: Theme Wheel

An interactive data visualization of The City of Ember's plot and themes.

DuPrau was born in San Francisco, California in 1944. She received her bachelor’s degree at Scripps College and then received teaching credentials at the University of California, Berkeley. She’s been a teacher, an editor, and a technical writer over the course of her life. DuPrau first garnered attention for her writing with her 1981 book Adoption: The Facts, Feelings, and Issues of a Double Heritage, which explored the emotional landscape of being adopted. Over the next several decades, she wrote several other nonfiction works, including the memoir The Earth House, but The City of Ember is her most famous work. She lives in Menlo Park, California, where she spends much of her time gardening.
Get the entire The City of Ember LitChart as a printable PDF.
"My students can't get enough of your charts and their results have gone through the roof." -Graham S.
Download 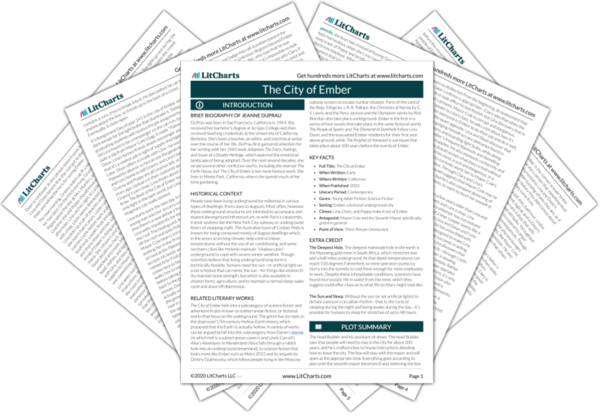 Historical Context of The City of Ember

People have been living underground for millennia in various types of dwellings, from caves to dugouts. Most often, however, these underground structures are intended to accompany and expand aboveground infrastructure, as with Paris’s catacombs, transit systems like the New York City subway, or underground floors of shopping malls. The Australian town of Coober Pedy is known for being composed mostly of dugout dwellings which, in the area’s scorching climate, help control indoor temperatures without the use of air conditioning, and some northern cities like Helsinki maintain “shadow cities” underground to cope with severe winter weather. Though scientists believe that living underground long term is technically feasible, humans need the sun—or artificial light on a set schedule that can mimic the sun—for things like vitamin D (to maintain bone strength, but which is also available in vitamin form), agriculture, and to maintain a normal sleep-wake cycle and stave off depression.

Other Books Related to The City of Ember

The City of Ember falls into a subcategory of science fiction and adventure fiction known as subterranean fiction, or fictional works that focus on life underground. The genre has its roots in the disproved 17th-century Hollow Earth theory, which proposed that the Earth is actually hollow. A variety of works can be argued to fall into this subcategory, from Dante’s Inferno (in which hell is a subterranean cavern) and Lewis Carroll’s Alice’s Adventures in Wonderland (Alice falls through a rabbit hole into an underground dreamland), to science fiction that looks more like Ember such as Metro 2033 and its sequels by Dmitry Glukhovsky, which follow people living in the Moscow subway system to escape nuclear disaster. Parts of the Lord of the Rings Trilogy by J. R. R. Tolkien, the Chronicles of Narnia by C. S. Lewis, and the Percy Jackson and the Olympians series by Rick Riordian also take place underground. Ember is the first in a series of four novels that take place in the same fictional world. The People of Sparks and The Diamond of Darkhold follow Lina, Doon, and the evacuated Ember residents for their first year above ground, while The Prophet of Yonwood is a prequel that takes place about 300 years before the events of Ember.
Key Facts about The City of Ember

Extra Credit for The City of Ember

The Deepest Hole. The deepest manmade hole in the earth is the Mponeng gold mine in South Africa, which stretches two and a half miles underground. At that depth temperatures can reach 150 degrees Fahrenheit, so mine operators pump icy slurry into the tunnels to cool them enough for mine employees to work. Despite these inhospitable conditions, scientists have found microscopic life in water from the mine, which they suggest could offer clues as to what life on Mars might look like.

The Sun and Sleep. Without the sun (or set artificial lights) to dictate a person’s circadian rhythm—that is, the cycle of sleeping during the night and being awake during the day—it’s possible for humans to sleep for stretches of up to 48 hours. 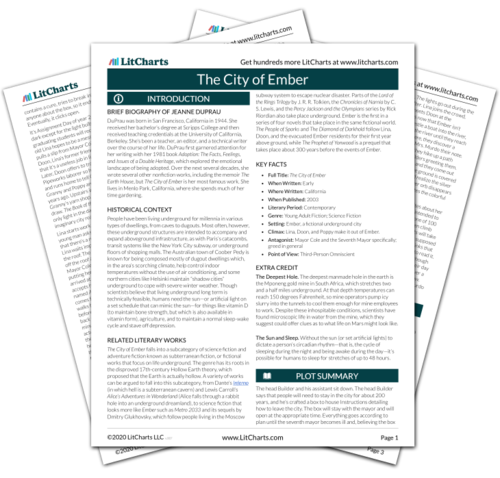 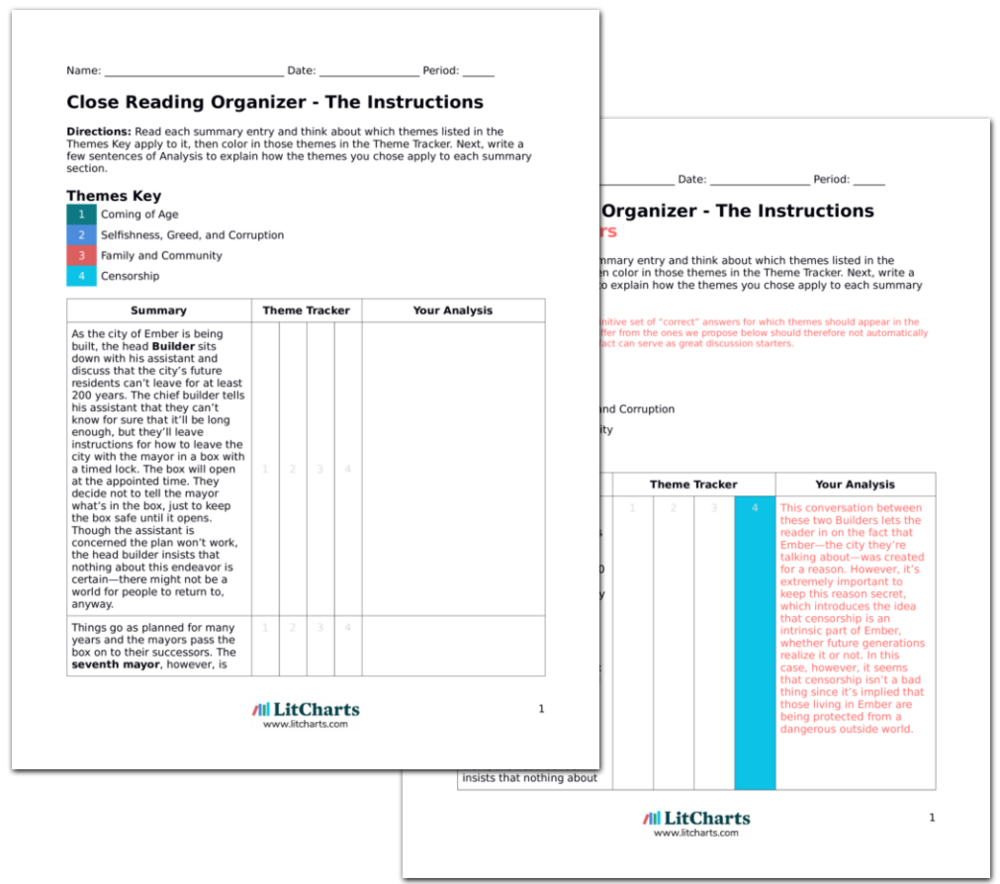