Download this LitChart! (PDF)
Teachers and parents! Struggling with distance learning? Our Teacher Edition on The City & the City can help.

Welcome to the LitCharts study guide on China Miéville's The City & the City. Created by the original team behind SparkNotes, LitCharts are the world's best literature guides.

The City & the City: Introduction

A concise biography of China Miéville plus historical and literary context for The City & the City.

The City & the City: Plot Summary

A quick-reference summary: The City & the City on a single page.

In-depth summary and analysis of every chapter of The City & the City. Visual theme-tracking, too.

The City & the City: Themes

Explanations, analysis, and visualizations of The City & the City's themes.

The City & the City: Quotes

The City & the City's important quotes, sortable by theme, character, or chapter.

The City & the City: Characters

Description, analysis, and timelines for The City & the City's characters.

Description, analysis, and timelines for The City & the City's terms.

The City & the City: Symbols

Explanations of The City & the City's symbols, and tracking of where they appear.

The City & the City: Theme Wheel

An interactive data visualization of The City & the City's plot and themes.

China Miéville was raised by a single mother in London. He studied anthropology at the University of Cambridge, where he became a Marxist, and later completed a master’s and PhD at the London School of Economics. His PhD thesis took the form of a “Marxist Theory of International Law.” While still working on his PhD, Miéville began publishing fiction. His work tends to include elements of the fantasy and science fiction genres, though he dislikes the label “fantasy,” because most people associate it with magical creatures like fairies and elves. The City and the City is one of his most popular and acclaimed books; it won several major awards, including the Locus Award, the Arthur C. Clarke award, and the Hugo Award. In addition to fiction, Miéville has also published comics, a children’s book, academic writing, and a retelling of the 1917 Russian Revolution (October, published in 2017). He is also active in socialist politics.
Get the entire The City & the City LitChart as a printable PDF.
"My students can't get enough of your charts and their results have gone through the roof." -Graham S.
Download 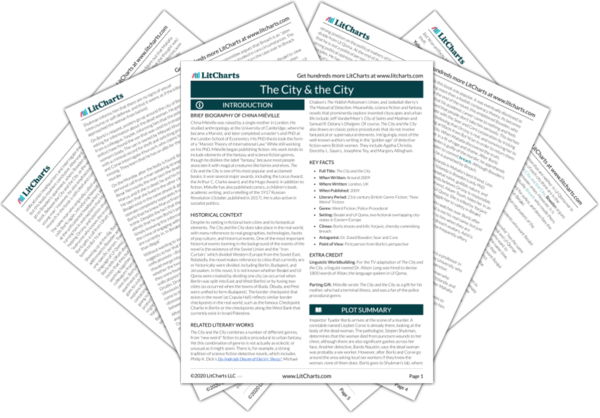 Historical Context of The City & the City

Despite its setting in fictional twin cities and its fantastical elements, The City and the City does take place in the real world, with many references to real geographies, technologies, facets of pop culture, and historical events. One of the most important historical events looming in the background of the events of the novel is the existence of the Soviet Union and the “Iron Curtain,” which divided Western Europe from the Soviet East. Relatedly, the novel makes reference to cities that currently are or historically were divided, including Berlin, Budapest, and Jerusalem. In the novel, it is not known whether Besźel and Ul Qoma were created by dividing one city (as occurred when Berlin was split into East and West Berlin) or by fusing two cities (as occurred when the towns of Buda, Óbuda, and Pest were unified to form Budapest). The border checkpoint that exists in the novel (at Copula Hall) reflects similar border checkpoints in the real world, such as the famous Checkpoint Charlie in Berlin or the checkpoints along the West Bank that currently exist in Israel/Palestine.

Other Books Related to The City & the City

The City and the City combines a number of different genres, from “new weird” fiction to police procedural to urban fantasy. Yet this combination of genres is not actually as eclectic or unusual as it might seem. There is, for example, a strong tradition of science fiction detective novels, which includes Philip K. Dick’s Do Androids Dream of Electric Sheep?, Michael Chabon’s The Yiddish Policeman’s Union, and Jedediah Berry’s The Manual of Detection. Meanwhile, science fiction and fantasy novels that prominently explore invented cityscapes and urban life include Jeff VanderMeer’s City of Saints and Madmen and Samuel R. Delany’s Dhalgren. Of course, The City and the City also draws on classic police procedurals that do not involve fantastical or supernatural elements. Intriguingly, most of the well-known authors writing in the “golden age” of detective fiction were British women. They include Agatha Christie, Dorothy L. Sayers, Josephine Tey, and Margery Allingham.
Key Facts about The City & the City

Extra Credit for The City & the City

Linguistic Worldbuilding. For the TV adaptation of The City and the City, a linguist named Dr. Alison Long was hired to devise 1800 words of Illitan, the language spoken in Ul Qoma.

Parting Gift. Miéville wrote The City and the City as a gift for his mother, who had a terminal illness, and was a fan of the police procedural genre. 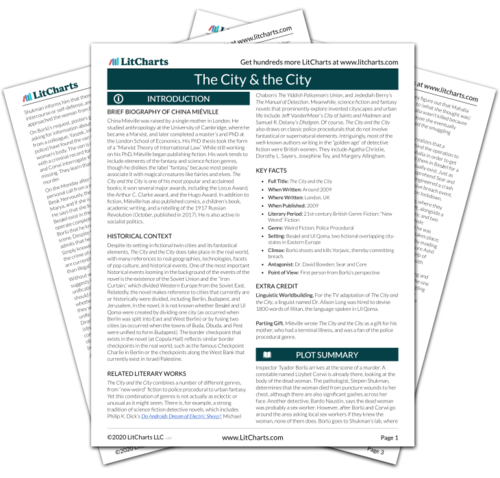 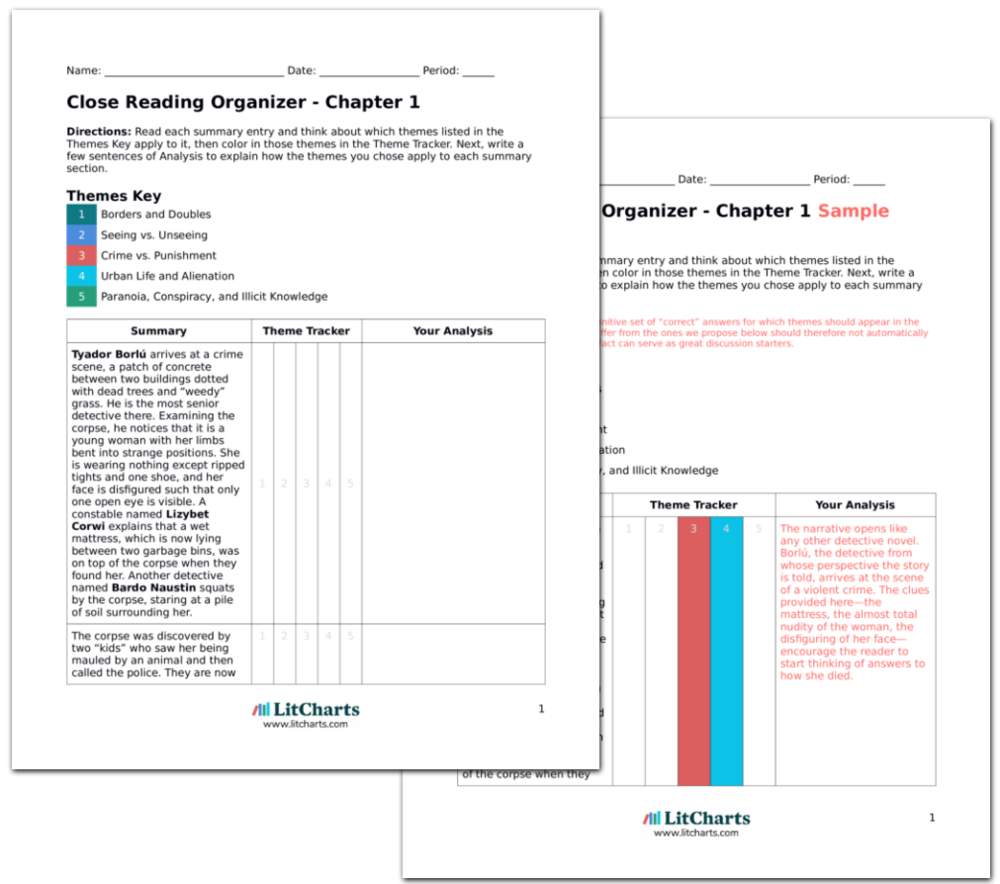