Get LitCharts A+
A sales scheme common during the 20th century. First, real estate agents would try to convince white people that African Americans were planning to move into their neighborhoods. Then, they would buy those white families’ houses at prices far below their market values. Finally, agents would sell those same houses to African American families at a huge markup. Blockbusting shows how the real estate industry profited from segregation: blockbusters took advantage of white people’s racism and black people’s willingness to pay more for the same quality housing. But it also shows how the Federal Housing Administration (FHA)’s economic justification for redlining was a self-fulfilling prophecy. While the FHA claimed that African Americans needed to be kept out of white areas because they brought property values down, the only reason that a drop in property values often coincided with the entrance of African Americans into a neighborhood was because of blockbusting. In other words, property values only went down because white people sold their houses for cheap, and they only did this precisely because they feared that African American neighbors would bring their property values down. Despite knowing that this logic was faulty, real estate agents gladly continued profiting from it. Blockbusters discovered yet another source of profit when they realized that African Americans, unable to get formal mortgages, would buy houses on the exploitative contract system. Since they were overcharged, these buyers often defaulted without having built any equity in their homes. Blockbusters foreclosed on these African American homeowners and resold their homes for profit.

Blockbusting Quotes in The Color of Law

The The Color of Law quotes below are all either spoken by Blockbusting or refer to Blockbusting. For each quote, you can also see the other terms and themes related to it (each theme is indicated by its own dot and icon, like this one:

Within six years the population of East Palo Alto was 82 percent black. Conditions deteriorated as African Americans who had been excluded from other neighborhoods doubled up in single-family homes. Their East Palo Alto houses had been priced so much higher than similar properties for whites that the owners had difficulty making payments without additional rental income. Federal and state housing policy had created a slum in East Palo Alto.

The director of the Federal Housing Administration supported Tenerowicz, stating that the presence of African Americans in the area would threaten property values of nearby residents. Foreman was forced to resign. The Federal Works Agency then proposed a different project for African Americans on a plot that the Detroit Housing Commission recommended, in an industrial area deemed unsuitable for whites. It soon became apparent that this site, too, would provoke protests because it was not far enough away from a white neighborhood. First Lady Eleanor Roosevelt protested to the president. The FWA again reversed course and assigned African Americans to the Sojourner Truth project. Whites in the neighborhood rioted, leading to one hundred arrests (all but three were African Americans) and thirty-eight hospitalizations (all but five were African Americans).

The full cycle went like this: when a neighborhood first integrated, property values increased because of African Americans’ need to pay higher prices for homes than whites. But then property values fell once speculators had panicked enough white homeowners into selling at deep discounts.
Falling sale prices in neighborhoods where blockbusters created white panic was deemed as proof by the FHA that property values would decline if African Americans moved in. But if the agency had not adopted a discriminatory and unconstitutional racial policy, African Americans would have been able, like whites, to locate throughout metropolitan areas rather than attempting to establish presence in only a few blockbusted communities, and speculators would not have been able to prey on white fears that their neighborhoods would soon turn from all white to all black.

Unlock with LitCharts A+
Get the entire The Color of Law LitChart as a printable PDF.
"My students can't get enough of your charts and their results have gone through the roof." -Graham S.
Download 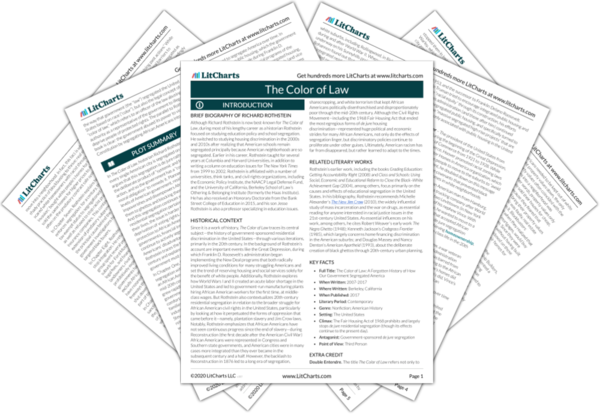 Blockbusting Term Timeline in The Color of Law

The timeline below shows where the term Blockbusting appears in The Color of Law. The colored dots and icons indicate which themes are associated with that appearance.

...to a black family” in East Palo Alto. Soon, an opportunistic real estate agent started “blockbusting”: first, he and his colleagues planted fears about a “Negro invasion”; then, they started buying... (full context)

...reduction in property prices it hoped to prevent: because black families could not get mortgages, blockbusting (buying at low prices from white people and selling at high prices to middle-class African... (full context) 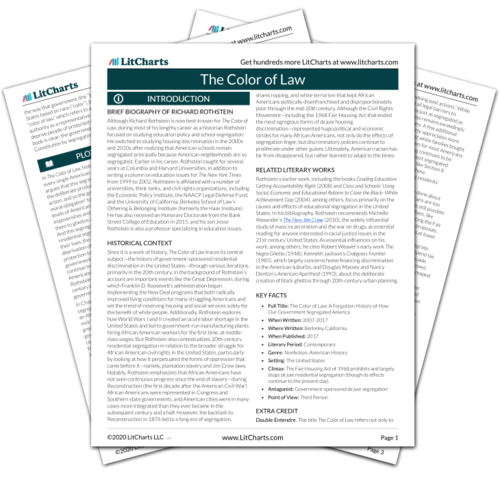 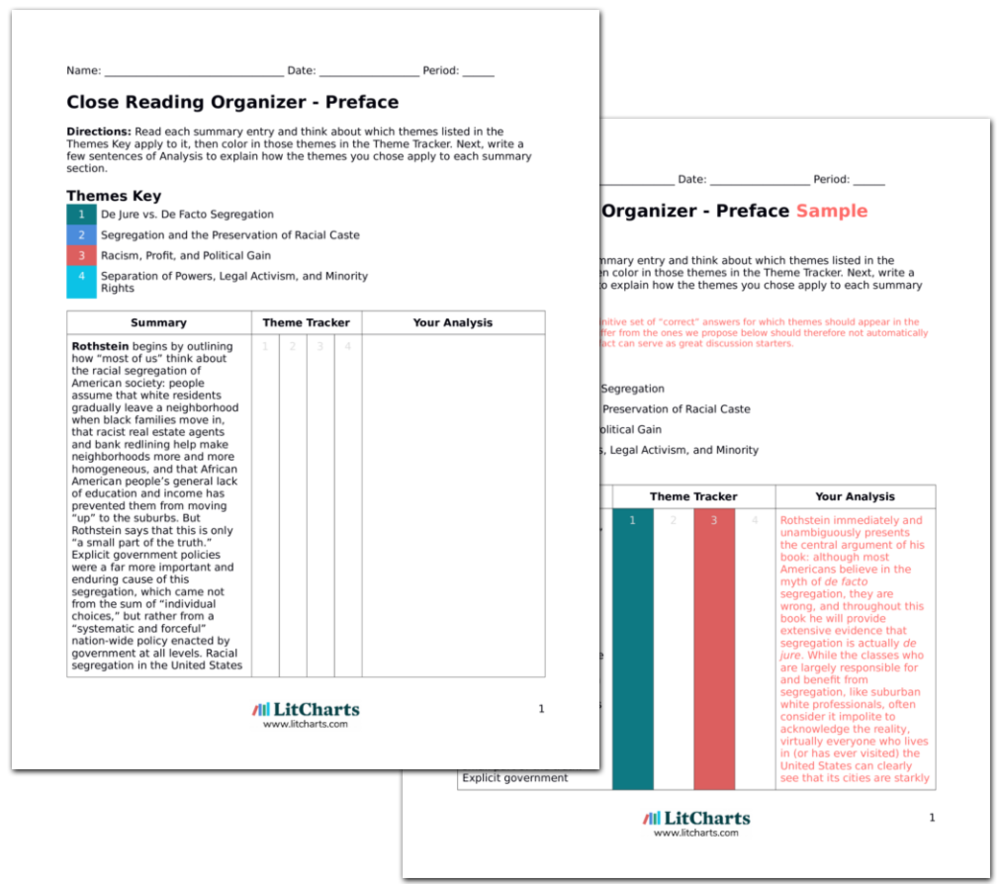