Marx and Engels see society dominated by the capitalist class—the bourgeoisie—as fundamentally unequal. To them, it is patently unfair that those at the top of society have so much more power and wealth than those at the bottom—especially given that the proletariat greatly outnumbers the bourgeoisie. That power and money give the bourgeoisie disproportionate control over society’s laws, social authorities, and media, allowing it to accumulate ever greater wealth and resources—in other words, the unequal distribution of wealth goes hand in hand with societal inequality. What’s more, because capitalists seek to maximize their profits, it would be contradictory for them to increase the proletariat’s share. In fact, say Marx and Engels, it is in the capitalist class’ interest to maximize inequality; by giving members of the proletariat only the bare minimum required for their survival and continuing labor, the bourgeoisie prevents the working class from accumulating any wealth of its own, making it impossible in turn for workers to acquire any genuine power or proper say in society. Addressing inequality fueled by wealth distribution, then, is one of the main motivations behind the manifesto.

Of course, inequality is not just about how much money people have relative to one another. It also hugely affects education, living standards, and general quality of life. The reason Marx and Engels are so preoccupied with economic inequality is that it skews the power structure of society, placing control in the hands of a wealthy few and disenfranchising the masses. They see the modern government as fundamentally controlled by the bourgeoisie, giving them power over law, politics, and enforcement of order. As the rich get richer and the poor get poorer, the bourgeoisie’s influence and control over society increase too. The bourgeoisie, then, moves to create a more centralized society that further favors profit-making: “Independent, or but loosely connected provinces, with separate interests, laws, governments and systems of taxation, became lumped together into one nation,” the authors write, “with one government, one code of laws, one national class-interest, one frontier and one customs-tariff.” It’s not the centralization of power that Marx and Engels object to—in fact, they see centralization as necessary to the proletariat’s revolution—but the way in this particular form of centralization fundamentally entrenches the unequal power dynamic by ensuring all the wealth filters up to the bourgeoisie ruling class.

Inequality and Distribution of Wealth ThemeTracker

The ThemeTracker below shows where, and to what degree, the theme of Inequality and Distribution of Wealth appears in each chapter of The Communist Manifesto. Click or tap on any chapter to read its Summary & Analysis.
How often theme appears:
chapter length:
Chapter
Introduction
Int
I. Bourgeois and ...
1
II. Proletarians ...
2
III. Socialist an...
3
IV. Position of t...
4
Get the entire The Communist Manifesto LitChart as a printable PDF.
"My students can't get enough of your charts and their results have gone through the roof." -Graham S.
Download 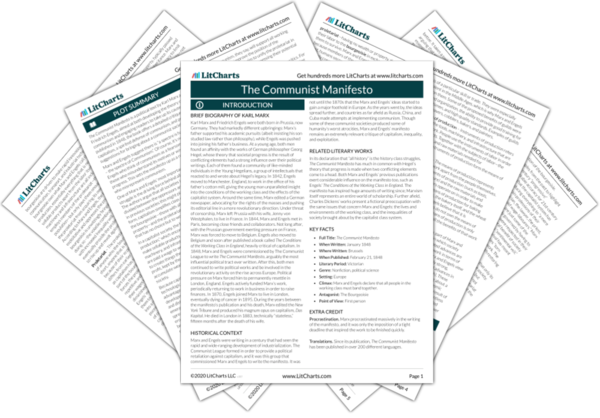 Inequality and Distribution of Wealth Quotes in The Communist Manifesto

Below you will find the important quotes in The Communist Manifesto related to the theme of Inequality and Distribution of Wealth.
I. Bourgeois and Proletarians Quotes

The bourgeoisie, wherever it has got the upper hand, has put an end to all feudal, patriarchal, idyllic relations. It has pitilessly torn asunder the motley feudal ties that bound man to his “natural superiors,” and has left no other nexus between man and man than naked self-interest, than callous “cash payment.” It has drowned the most heavenly ecstasies of religious fervor, of chivalrous enthusiasm, of philistine sentimentalism, in the icy water of egotistical calculation. It has resolved personal worth into exchange value, and in place of the numberless indefeasible chartered freedoms, has set up that single, unconscionable freedom—Free Trade. In one word, for exploitation, veiled by religious and political illusions, it has substituted naked, shameless, direct, brutal exploitation.

But not only has the bourgeoisie forged the weapons that bring death to itself; it has also called in to existence the men who are to wield those weapons—the modern working class—the proletarians.

The proletariat will use its political supremacy to wrest, by degrees, all capital from the bourgeoisie, to centralize all instruments of production in the hands of the State, i.e., of the proletariat organized as the ruling class; and to increase the total of productive forces as rapidly as possible.

Of course, in the beginning, this cannot be effected except by means of despotic inroads on the rights of property, and on the conditions of bourgeois production; by means of measures, therefore which appear economically insufficient and untenable, but which, in the course of the movement, outstrip themselves, necessitate further inroads upon the old social order, and are unavoidable as a means of entirely revolutionizing the mode of production.

Unlock with LitCharts A+
III. Socialist and Communist Literature Quotes

A part of the bourgeoisie is desirous of redressing social grievances, in order to secure the continued existence of bourgeois society.

To this section belong economists, philanthropists, humanitarians, improvers of the condition of the working class, organizers of charity, members of societies for the prevention of cruelty to animals, temperance fanatics, hole-and-corner reformers of every imaginable kind.

Unlock with LitCharts A+
IV. Position of the Communists... Quotes