Eliza Wharton’s fiancé, Mr. Haly, has recently died. Eliza’s hand had been promised to Mr. Haly, a preacher several years her senior, by her late father, and owing to an “implicit obedience to the will and desires of [her] parents,” she had agreed to marry him. Mr. Haly fell ill not long after their engagement, and while they never married, Eliza nursed him until his death. She did not love him, but she did grow fond of him, and now she is relieved and happy to be released from her obligation. Eliza is resistant to the oppressive ideals of womanhood in post-Revolutionary America’s patriarchal society, and she has no desire to marry or have a family. Eliza is a vivacious and cheerful woman of a “naturally gay disposition,” and she has a tendency for coquetry. Eliza views marriage as confining, and she considers it “the tomb of friendship”—this is especially grave to her because friendship is the most important aspect of her life. She wants to socialize and date multiple men and avoid becoming anyone’s wife for as long as possible.

While visiting her dear friends, the General and Mrs. Richman, Eliza meets two very different men: Reverend Boyer, a respectable and solemn preacher, and Major Sanford, a wealthy and fashionable man—and a confessed libertine and rake. Reverend Boyer is just the type of man society and Eliza’s friends expect her to marry. He is honorable and virtuous, but he is also rather boring, and he lives a frugal life. Sanford, on the other hand, is exciting and charismatic, and he is fabulously wealthy. A match with Sanford could secure Eliza a place in the upper class, something she has dreamed of for most of her life. Sanford’s reputation, however, leaves much to be desired, and he sees Eliza as nothing more than another potential notch in his belt. Eliza’s friends despise Sanford, and they are overly critical and judgmental of Eliza’s flirtatious behavior and her obvious attraction to him. Despite Mrs. Richman’s constant encouragement to accept Reverend Boyer’s advances, Eliza tells her friends and both the men in her life in no uncertain terms that she will not be confined to any man.

As a woman in the late 1700s, Eliza’s wishes to remain single are ignored by Boyer and Sanford, and they both vie for her attention. Boyer begins to fall in love with her, and constantly pressures her to get married. Sanford, who (like Eliza) believes marriage to be confining and oppressive, has no desire to marry her. After all, Eliza doesn’t have any money, and Sanford has squandered his own fortune. If he ever does get married, it will be to a woman with a substantial fortune who can keep him in the lifestyle he has grown accustomed to.

Even though Sanford has no desire to marry Eliza, he doesn’t wish to see her with anyone else, and he vows to sabotage her relationship with Reverend Boyer. Eliza’s friends continue to encourage her to marry Boyer—despite her explicit requests for them to stay out of her romantic life—and they openly condemn her attraction to Sanford. Soon, Eliza’s friends and their patriarchal society wear her down, and she agrees to marry Boyer, but she refuses to give him a concrete date. Boyer grows tired of waiting for her, and he is increasingly suspicious of her relationship with Sanford. Boyer finally leaves Eliza for good after finding her in the garden, deep in conversation with Sanford.

After Boyer leaves Eliza, he writes her a scathing letter. He writes not as a “lover,” he says, but as “a disinterested friend,” and like Eliza’s friends, he scorns and insults her. He implies that her virtue and morals are lacking, and that her coquettish behavior is beneath his righteous honor. He condemns her relationship with Sanford, and then he goes to Hampshire to take his final vows as a preacher and serve a local church. Eliza is left heartbroken. She had met with Sanford in the garden only to tell him that she planned to marry Boyer and couldn’t see him anymore, but Boyer refuses to hear her explanation. Eliza has finally fallen in love with Boyer, but it is too late.

Sanford, too, leaves and heads south, and it is not long before Eliza hears rumors that he is to marry a rich southern woman. Alone without either man, Eliza spirals into a crippling depression, and her health begins to fail. She starts to lose weight and offers vague complaints of fatigue and headaches, and she completely withdraws from social life. Mrs. Richman encourages Eliza to write Boyer for “peace of mind,” which she does, hoping to “rekindle the flame” of their prior relationship. Boyer is pleasant, but distant and still judgmental, and he has taken a new and “virtuous” wife.

In the meantime, Eliza’s physical and mental health continue to fail, and Sanford moves back to town with his new wife, Nancy. Sanford immediately resumes his friendship with Eliza and encourages her to spend time with his wife. Eliza agrees, and while she briefly seems to lift from her depression, it is not long before she again turns into a “recluse.” Eliza’s friend, Julia Granby, comes to stay with Eliza in hopes of cheering her up, but Eliza is beyond her help. What’s more, Julia too is judgmental and critical of Eliza’s relationship with Sanford and her coquettish ways, and she often only makes Eliza feel worse.

Sanford continues to pursue Eliza, doing nothing to hide it from his wife, and is soon successful in seducing her. She becomes pregnant and manages to conceal it from her friends and family, but then Julia catches her sneaking out in the middle of the night to meet Sanford. She admits the affair and throws herself at Julia’s mercy, but Julia is cold and unforgiving. “You have erred against knowledge and reason; against warning and counsel,” Julia tells Eliza. “You have forfeited the favor of your friends; and reluctant will be their forgiveness.”

With her reputation ruined, Eliza leaves town in the middle of the night. Sanford escorts her to a roadside inn at Danvers, a town in northern Massachusetts, and secures her a room. Sanford returns home and never sees Eliza again. Nancy soon divorces Sanford, leaving him homeless and destitute, and Eliza gives birth to a baby alone at the inn, who promptly dies. Eliza herself dies not long after, presumably from tuberculosis, having “become a reproach and disgrace to [her]friends.” 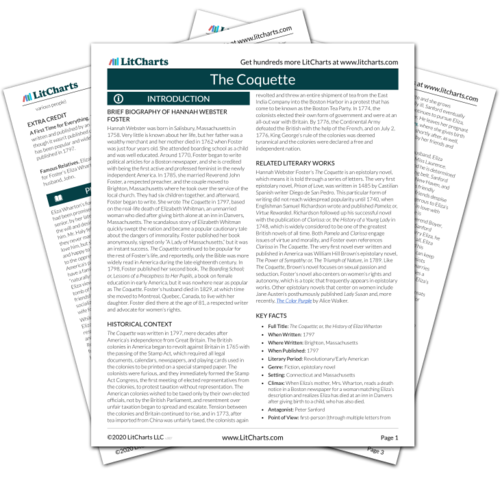 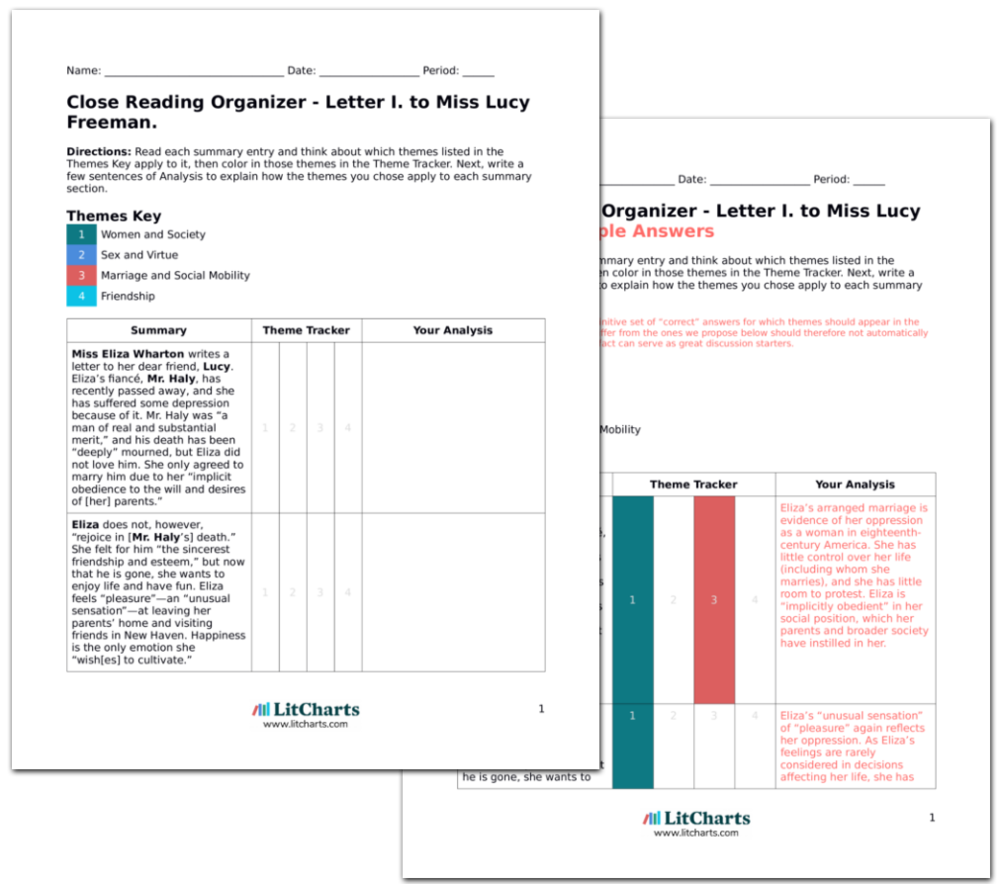