Download this LitChart! (PDF)
Teachers and parents! Struggling with distance learning? Our Teacher Edition on The Country Wife can help.

Welcome to the LitCharts study guide on William Wycherley's The Country Wife. Created by the original team behind SparkNotes, LitCharts are the world's best literature guides.

A concise biography of William Wycherley plus historical and literary context for The Country Wife.

A quick-reference summary: The Country Wife on a single page.

In-depth summary and analysis of every scene of The Country Wife. Visual theme-tracking, too.

Explanations, analysis, and visualizations of The Country Wife's themes.

Description, analysis, and timelines for The Country Wife's characters.

Description, analysis, and timelines for The Country Wife's terms.

Explanations of The Country Wife's symbols, and tracking of where they appear.

An interactive data visualization of The Country Wife's plot and themes.

William Wycherly was born in Shropshire, England, into a moderately wealthy, Royalist family. He went to school in France where he briefly converted to Catholicism, returning to Protestantism after coming back to England in the 1650s. Wycherly took up residence at Oxford on his return but left Oxford for London in 1659. He joined the armed forces and was sent first to Ireland, in 1662, and later to Madrid. In 1671, Wycherly produced his first play, Love in a Wood, which was popular in the court of Charles II. It is believed to have caught the attention of Charles’s mistress, Barbara Villiers, who would afterwards patronize much of Wycherly’s work. In 1672, Wycherly was deployed with his regiment to the Isle of Wight, and, during this period, he is believed to have written The Country Wife. This play, and another, The Plain Dealer, were performed in 1675 and secured Wycherly’s reputation in Charles II’s court and in London high society. He had a reputation as a hedonist, a man’s man, and a confirmed bachelor; qualities which were encouraged and valorized during the Restoration period. In 1679, Wycherly secretly married a wealthy widow, the Countess of Drogheda. He deliberately kept the marriage a secret to protect his reputation as a libertine, but word got out and the marriage put him out of favor with Charles II. After his wife’s death in 1685, Wycherly was left with significant debts and was eventually imprisoned in London. He was released by King James II, after Charles II’s death. He married again in 1715 but died shortly after and never recovered his reputation or wealth during his lifetime. He died in 1716 and was buried in Covent Garden in London.
Get the entire The Country Wife LitChart as a printable PDF.
"My students can't get enough of your charts and their results have gone through the roof." -Graham S.
Download 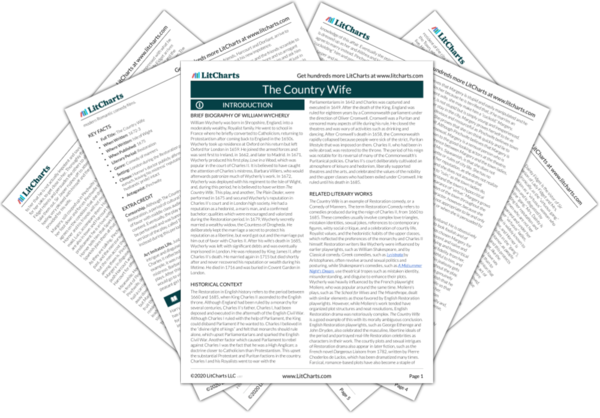 Historical Context of The Country Wife

The Restoration in English history refers to the period between 1660 and 1685, when King Charles II ascended to the English throne. Although England had been ruled by a monarchy for several centuries, Charles II’s father, Charles I, had been deposed and executed in the aftermath of the English Civil War. Although Charles I ruled with the help of Parliament, the King could disband Parliament if he wanted to. Charles I believed in the “divine right of kings” and felt that monarchs should rule alone, which upset Parliamentarians and sparked the English Civil War. Another factor which caused Parliament to rebel against Charles I was the fact that he was a High Anglican; a doctrine closer to Catholicism than Protestantism. This upset the substantial Protestant and Puritan factions in the country. Charles I and his Royalists went to war with the Parliamentarians in 1642 and Charles was captured and executed in 1649. After the death of the King, England was ruled for eighteen years by a Commonwealth parliament under the direction of Oliver Cromwell. Cromwell was a Puritan and censored many aspects of life during his rule. He closed the theatres and was wary of activities such as drinking and dancing. After Cromwell’s death in 1658, the Commonwealth rapidly collapsed because people were sick of the strict, Puritan lifestyle that was imposed on them. Charles II, who had been in exile abroad, was restored to the throne. The period of his reign was notable for its reversal of many of the Commonwealth’s Puritanical policies. Charles II’s court deliberately cultivated an atmosphere of leisure and hedonism, liberally supported theatres and the arts, and celebrated the values of the nobility and the upper classes who had been exiled under Cromwell. He ruled until his death in 1685.

Other Books Related to The Country Wife

The Country Wife is an example of Restoration comedy, or a Comedy of Manners. The term Restoration Comedy refers to comedies produced during the reign of Charles II, from 1660 to 1685. These comedies usually involve complex love triangles, mistaken identities, sexual jokes, references to contemporary figures, witty social critique, and a celebration of courtly life, Royalist values, and the hedonistic habits of the upper classes, which reflected the preferences of the monarchy and Charles II himself. Restoration writers like Wycherly were influenced by earlier playwrights, such as William Shakespeare, and by Classical comedy. Greek comedies, such as Lysistrata by Aristophanes, often revolve around sexual politics and posturing, while Shakespeare’s comedies, such as A Midsummer Night's Dream, use theatrical tropes such as mistaken identity, misunderstanding, and disguise to enhance their plots. Wycherly was heavily influenced by the French playwright Moliere, who was popular around the same time. Moliere’s plays, such as The School for Wives and The Misanthrope, dealt with similar elements as those favored by English Restoration playwrights. However, while Moliere’s work tended have organized plot structures and neat resolutions, English Restoration drama was notoriously complex. The Country Wife is a good example of this with its morally ambiguous conclusion. English Restoration playwrights, such as George Etherege and John Dryden, also celebrated the masculine, libertine ideals of the period and portrayed real-life Restoration celebrities as characters in their work. The courtly plots and sexual intrigues of Restoration drama also appear in later fiction, such as the French novel Dangerous Liaisons from 1782, written by Pierre Choderlos de Laclos, which has been dramatized many times. Farcical, romance-based plots have also become a staple of modern Romantic comedy films.
Key Facts about The Country Wife

Extra Credit for The Country Wife

Censorship. Although The Country Wife was popular in the early Restoration, a period of cultural liberalism, it gradually fell out of favor with middle class audiences because of its sexual content. Eventually, the play was considered too provocative to be performed and was banned from 1753-1924. A sanitized version of the play, called The Country Girl, was performed instead during this period.

Art Imitates Life. Just as The Country Wife is a play filled with intrigue and disguise, Wycherly’s own life in the court of Charles II reflected some of this theatrical extravagance. For example, it was rumored that Wycherly flirted with Charles II’s mistress, Barbara Villiers, after she saw and enjoyed one of his plays. After this interaction, it was widely believed that Villiers would go to visit Wycherly in his lodgings disguised as a peasant girl to hide her identity. 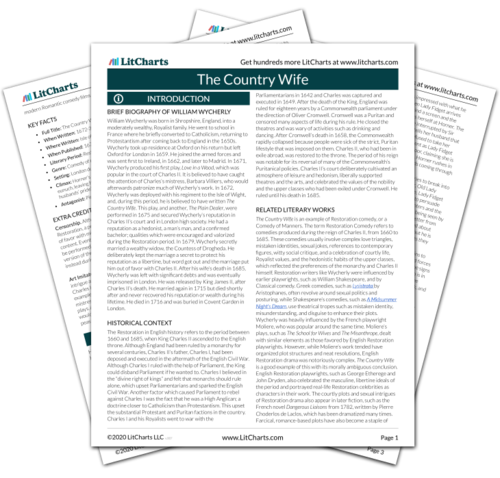 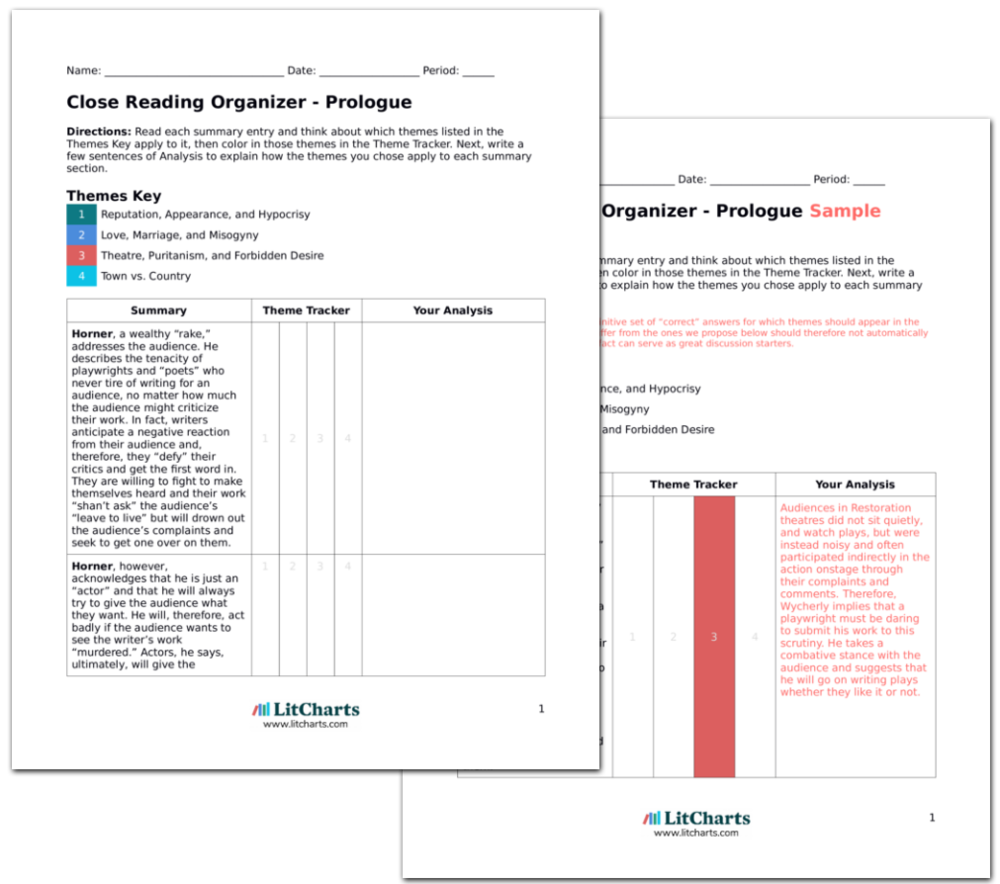