Get LitCharts A+
LitCharts assigns a color and icon to each theme in The Crossover, which you can use to track the themes throughout the work.

Josh and JB represent a second generation of basketball stardom in their family: as a young man, Dad played basketball in Italy, was a star college player, and was even asked to play for the Los Angeles Lakers. As Josh learns more about his dad's early successes and also experiences his own basketball failures, he begins to think more critically about stardom and how much control a person has to dictate the terms of their success through hard work and practice.

For Josh and JB, their eventual stardom seems assured: Dad makes it clear to them that basketball runs in their veins, while also making sure they understand the value of practice. He makes them practice their free throws every evening and both parents encourage their sons' goal of playing in college. The combination of telling Josh and JB that their skills on the court are the product of genes and practice suggests that both boys are raised to understand that while they may have natural aptitude, that aptitude does little if they don't work hard to develop it. Josh in particular is dedicated to practice. He tells the reader how, when Coach offers to let the first teammate who finishes wind sprints to sit out of practice, Josh gives up his lead on purpose--he understands that the only way he can effectively follow in Dad's footsteps is to work as hard as he can.

While the way that Josh and JB are raised and spoken to about basketball suggests a simple if-then relationship between work and success, they soon discover information that complicates this reading. One afternoon, when Josh is given permission to look for something in his parents' closet and decides to secretly look in Dad's special box of old basketball memorabilia, he and JB make a shocking revelation: as a young man, Dad was asked to play for the Los Angeles Lakers, but the offer was rescinded when he refused to undergo surgery for patellar tendinitis.

It's important to note that patellar tendinitis, or jumper's knee, is inflammation that develops due to overuse--in other words, it suggests that Dad's hard work on the court actually led him to develop an injury that, in turn, prevented him from being able to continue his rise to stardom. However, it's also worth noting that Dad refused to seek treatment for his jumper's knee. Though Dad's fear of doctors makes this decision more understandable, it also impresses upon Josh and JB that, when it comes to treatable things like this that might jeopardize their ability to play, they do have the power to fix it. Essentially, just as they can choose to practice daily to hone their natural aptitude, they can also choose to fix problems like this when they arise rather than letting them end their career.

Ultimately, The Crossover suggests that the relationship between success and work is a matter of choice: though not everyone is gifted or has the natural aptitude for basketball like Dad, Josh, and JB do, everyone has the choice to work hard--though the rest of the boys' teammates (who, aside from Vondie, Josh doesn't name) aren't spoken of as being stars like JB and Josh are, they're nonetheless valued members of the team. However, by complicating this with Dad's choices regarding his patellar tendinitis, the novel insists that success is about more than choosing to practice. Success instead becomes a reflection of aptitude, practice, and, most importantly, the choice to care for one's health; without health, the other elements hardly matter.

The ThemeTracker below shows where, and to what degree, the theme of Success, Work, and Choice appears in each chapter of The Crossover. Click or tap on any chapter to read its Summary & Analysis.
How often theme appears:
chapter length:
Chapter
Warm-Up
WU
First Quarter
Q1
Second Quarter
2Q
Third Quarter
3Q
Fourth Quarter
4Q
Overtime
OT
Get the entire The Crossover LitChart as a printable PDF.
"My students can't get enough of your charts and their results have gone through the roof." -Graham S.
Download 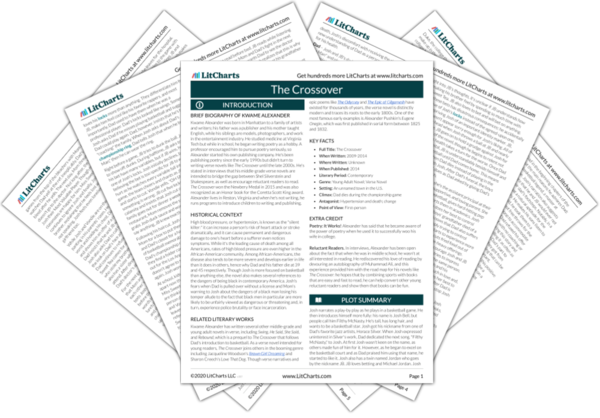 Success, Work, and Choice Quotes in The Crossover

Below you will find the important quotes in The Crossover related to the theme of Success, Work, and Choice.
Warm-Up Quotes

1. ever since I watched
the clip of Dad
posterizing
that seven-foot Croatian center
on ESPN's Best Dunks Ever;
soaring through the air—his
long twisted hair like wings
carrying him
high above
the rim—I knew
one day
I'd need
my own wings
to fly.

As in: I wonder why my dad
never had surgery
on his patellar tendinitis.

and even though I don't plan it,
I let him win
and get ready to practice
harder.

Like heirloom.
As in: Dad treats his championship ring
like some kind of family heirloom
that we can't wear
until one of us becomes Da Man.

Unlock with LitCharts A+
Overtime Quotes

On the forty-ninth shot,
I am only slightly aware
that I am moments from fifty.
The only thing that really matters
is that out here
in the driveway
shooting free throws
I feel closer to Dad.

You earned it, Filthy, he says,
sliding the ring on my finger.
My heart leaps
into my throat.

Dad's championship ring.
Between the bouncing
and sobbing, I whisper, Why?

And for the first time in my life
I don't want to be. 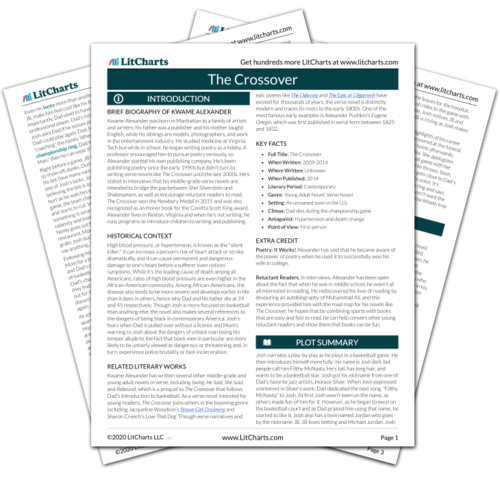 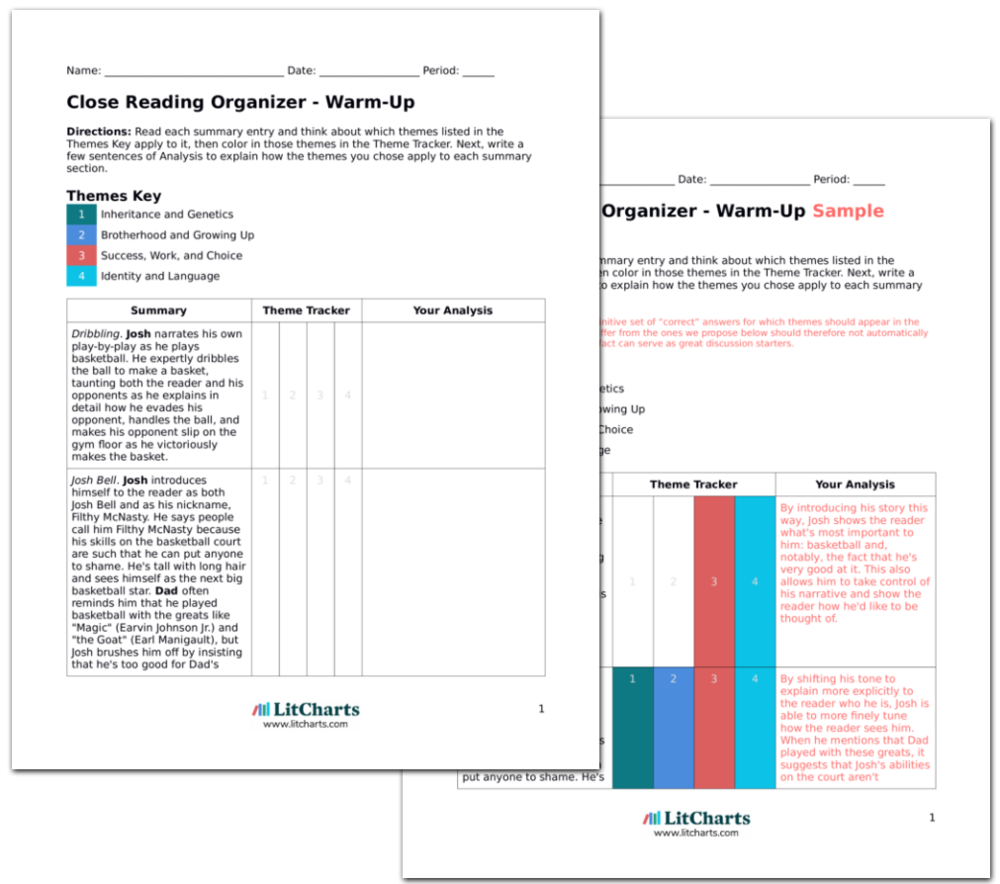