Get LitCharts A+
W.A.S.T.E. is the underground postal system that Oedipa gradually uncovers over the course of the book. Although Oedipa never learns about W.A.S.T.E.’s origins or if it is the same as Mike Fallopian’s secret postal service, stamp expert Genghis Cohen eventually shows her a stamp that explains the acronym: “We Await Silent Tristero’s Empire.” This suggests that the system is a direct descendent of the European Tristero postal system, exported to the United States around the year 1849. Beyond being literal waste in this sense, as the system was discarded and cast out of Europe, it also exists at the fringes of society, where it is run primarily by homeless and socially outcast people. In this sense, as its name suggests, W.A.S.T.E. also represents the underlying power of those who are deemed disposable and valueless.

The The Crying of Lot 49 quotes below are all either spoken by W.A.S.T.E. or refer to W.A.S.T.E.. For each quote, you can also see the other terms and themes related to it (each theme is indicated by its own dot and icon, like this one:

“It’s the principle,” Fallopian agreed, sounding defensive. “To keep it up to some kind of a reasonable volume, each member has to send at least one letter a week through the Yoyodyne system. If you don’t, you get fined.” He opened his letter and showed Oedipa and Metzger.

Dear Mike, it said, how are you? Just thought I’d drop you a note. How’s your book coming? Guess that’s all for now. See you at The Scope.

“That’s how it is,” Fallopian confessed bitterly, “most of the time.”

“Then the watermark you found,” she said, “is nearly the same thing, except for the extra little doojigger sort of coming out of the bell.”

“It sounds ridiculous,” Cohen said, “but my guess is it's a mute.”

She nodded. The black costumes, the silence, the secrecy. Whoever they were their aim was to mute the Thurn and Taxis post horn.

“Why put in a deliberate mistake?” he asked, ignoring—if he saw it—the look on her face. “I've come up so far with eight in all. Each one has an error like this, laboriously worked into the design, like a taunt. There's even a transposition—U. S. Potsage, of all things.”

Either you have stumbled indeed, without the aid of LSD or other indole alkaloids, onto a secret richness and concealed density of dream […] Or you are hallucinating it. Or a plot has been mounted against you […] all financed out of the estate in a way either too secret or too involved for your non-legal mind to know about even though you are co-executor, so labyrinthine that it must have meaning beyond just a practical joke. Or you are fantasying some such plot, in which case you are a nut, Oedipa, out of your skull.

Those, now that she was looking at them, she saw to be the alternatives. Those symmetrical four. She didn’t like any of them, but hoped she was mentally ill; that that’s all it was. That night she sat for hours, too numb even to drink, teaching herself to breathe in a vacuum. For this, oh God, was the void. There was nobody who could help her. Nobody in the world. They were all on something, mad, possible enemies, dead.

Unlock with LitCharts A+
Get the entire The Crying of Lot 49 LitChart as a printable PDF.
"My students can't get enough of your charts and their results have gone through the roof." -Graham S.
Download 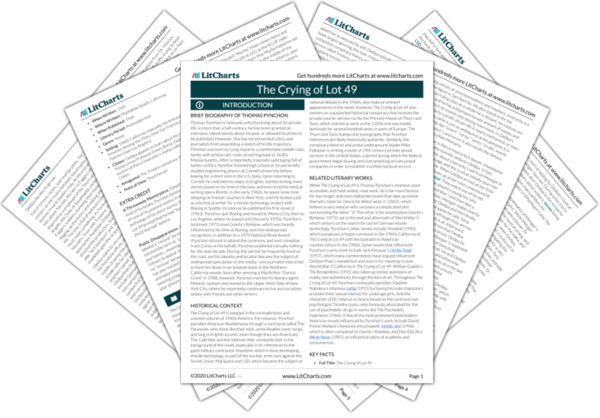 The timeline below shows where the term W.A.S.T.E. appears in The Crying of Lot 49. The colored dots and icons indicate which themes are associated with that appearance.

...a solicitation for sex, it but asks interested parties to contact the writer, Kirby, through “WASTE.” It includes a strange symbol that looks like a muted trumpet. (full context)

...and tells her that he was giving her the wrong address. Oedipa asks about the WASTE address from the bathroom wall, but Stanley tells her that it’s pronounced as an acronym—W.A.S.T.E.... (full context)

...ring that his grandfather cut off of one of these people’s fingers: it has the W.A.S.T.E. horn symbol on it. (full context)

...government might have hired them to reinforce its monopoly. He also knows nothing about the W.A.S.T.E. horn symbol. (full context)

...what he finds peculiar about one of the stamps: its is printed with the mysterious W.A.S.T.E. symbol as a watermark. Another stamp, from Germany, says “Thurn und Taxis.” Cohen explains that... (full context)

...if they should report their findings, and Cohen suddenly gets nervous—when she asks him about W.A.S.T.E., he’s clearly no longer interested in answering her questions, and he starts talking about the... (full context)

...founder is, but he proposes that Oedipa try to contact the man by means of W.A.S.T.E. He wonders aloud about what W.A.S.T.E. users even have to say to one another. He... (full context)

...humankind’s transfer of power to the dolphins, asking his mother to write to him through W.A.S.T.E. She sees the symbol several more times throughout the night. (full context)

...morning, Oedipa feels defeated, paralyzed by the sheer quantity of clues and the popularity of W.A.S.T.E. Downtown, she sees an elderly sailor with the symbol tattooed on his hand crying inside... (full context)

...out. Once she arrives, it takes her an hour to find the green can marked “W.A.S.T.E.” She sees someone else leave some letters inside, adds her own, and then waits. When... (full context)

...Dr. Hilarius on the way. Although she has seen clear evidence that the horn and W.A.S.T.E. are all over the Bay Area, she hopes that Hilarius will convince her that she... (full context)

...Scope. She explains all her findings and asks why his mail club does not use W.A.S.T.E. Mike replies that maybe they just haven’t found the right opportunity yet, and that maybe... (full context) 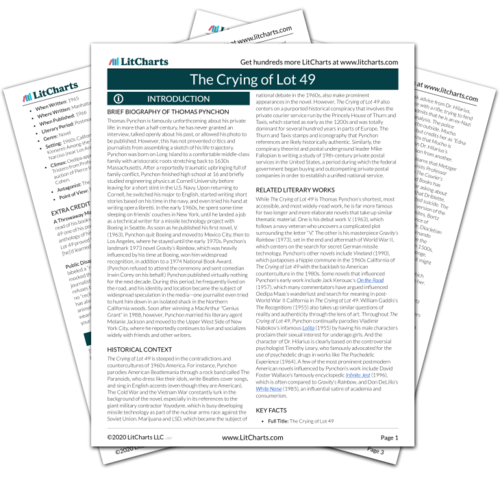 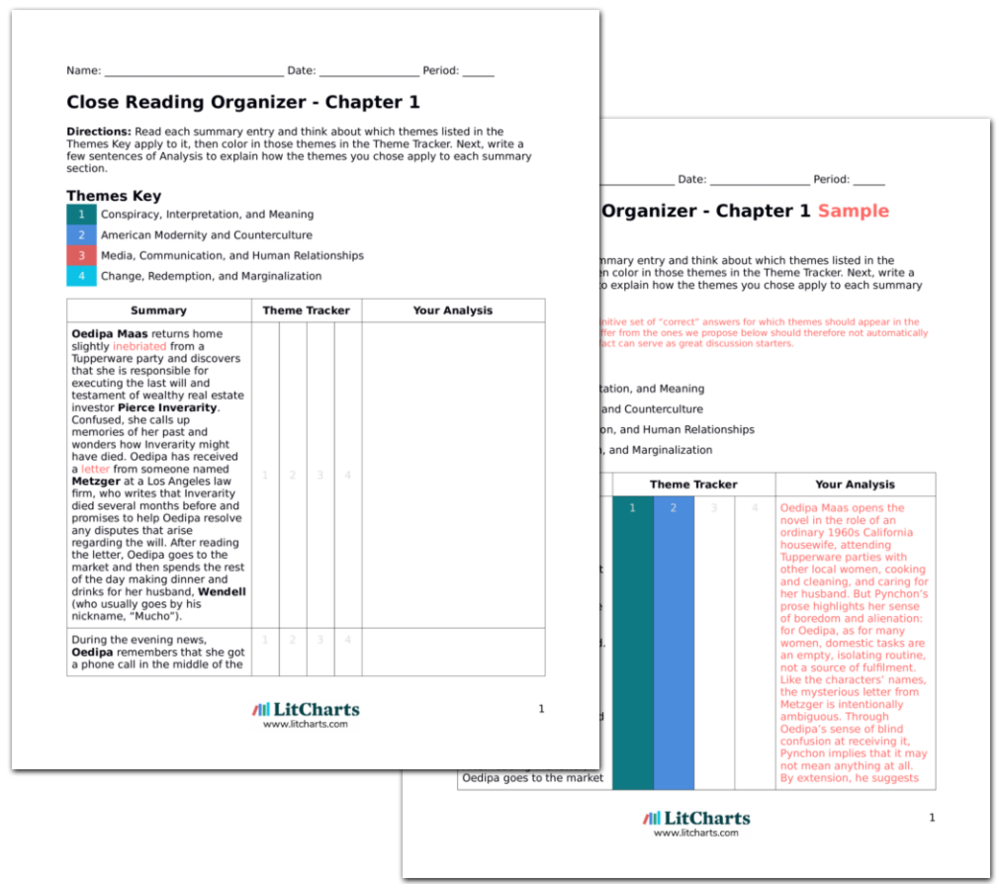