Download this LitChart! (PDF)
Teachers and parents! Struggling with distance learning? Our Teacher Edition on The Custody of the Pumpkin can help.

Welcome to the LitCharts study guide on P.G. Wodehouse's The Custody of the Pumpkin. Created by the original team behind SparkNotes, LitCharts are the world's best literature guides.

The Custody of the Pumpkin: Introduction

A concise biography of P.G. Wodehouse plus historical and literary context for The Custody of the Pumpkin.

The Custody of the Pumpkin: Plot Summary

A quick-reference summary: The Custody of the Pumpkin on a single page.

The Custody of the Pumpkin: Detailed Summary & Analysis

In-depth summary and analysis of every of The Custody of the Pumpkin. Visual theme-tracking, too.

The Custody of the Pumpkin: Themes

Explanations, analysis, and visualizations of The Custody of the Pumpkin's themes.

The Custody of the Pumpkin: Quotes

The Custody of the Pumpkin's important quotes, sortable by theme, character, or .

The Custody of the Pumpkin: Characters

Description, analysis, and timelines for The Custody of the Pumpkin's characters.

The Custody of the Pumpkin: Symbols

Explanations of The Custody of the Pumpkin's symbols, and tracking of where they appear.

The Custody of the Pumpkin: Theme Wheel

An interactive data visualization of The Custody of the Pumpkin's plot and themes.

Born in Guildford, England, to a Hong Kong based British magistrate, Sir Pelham Grenville Wodehouse was primarily raised by a nanny until he was old enough to be sent to boarding school. From the ages of 12 to 18, he attended Dulwich College, which he considered to be the happiest years of his life, and the school heavily influenced his earlier works. Following his graduation, Wodehouse intended to pursue further education at Oxford, but his family’s financial troubles prevented this, and he instead became a junior banker. During this time, Wodehouse published 80 articles across nine magazines, and following the release of his first book, The Pot Hunters, in 1902, he resigned from his position to write full-time. From this point onward, he divided his time between England and America and began to write for the stage. Eventually, Wodehouse and his wife moved to Le Touquet, France, where he was imprisoned by German soldiers following the town’s capture in World War II. After his release, he made five radio broadcasts to the U.S, over German radio, detailing his capture in a humorous light. His use of enemy broadcasting equipment caused outcry in Britain, where he was labeled a traitor and Nazi propagandist. In the wake of the war, Wodehouse moved to Long Island and remained there for the rest of his life. In 1975, he was awarded a knighthood and died just a month later at the age of 93. Over the course of his lifetime, Wodehouse authored over 90 books, 40 plays, and 200 short stories.
Get the entire The Custody of the Pumpkin LitChart as a printable PDF.
"My students can't get enough of your charts and their results have gone through the roof." -Graham S.
Download 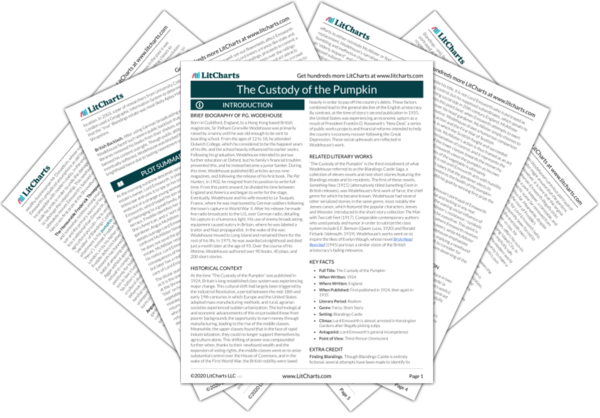 Historical Context of The Custody of the Pumpkin

At the time “The Custody of the Pumpkin” was published in 1924, Britain’s long-established class system was experiencing major change. This cultural shift had largely been triggered by the Industrial Revolution, a period between the mid-18th and early 19th centuries in which Europe and the United States adopted mass manufacturing methods, and rural, agrarian societies experienced sudden urbanization. The technological and economic advancements of this era provided those from poorer backgrounds the opportunity to earn money through manufacturing, leading to the rise of the middle classes. Meanwhile, the upper classes found that in the face of rapid industrialization, they could no longer support themselves by agriculture alone. This shifting of power was compounded further when, thanks to their newfound wealth and the expansion of voting rights, the middle classes went on to seize substantial control over the House of Commons, and in the wake of the First World War, the British nobility were taxed heavily in order to pay off the country’s debts. These factors combined lead to the general decline of the English aristocracy. By contrast, at the time of story’s second publication in 1935, the United States was experiencing an economic upturn as a result of President Franklin D. Roosevelt’s “New Deal,” a series of public works projects and financial reforms intended to help the country’s economy recover following the Great Depression. These social upheavals are reflected in Wodehouse’s work.

Other Books Related to The Custody of the Pumpkin

“The Custody of the Pumpkin” is the third installment of what Wodehouse referred to as the Blandings Castle Saga, a collection of eleven novels and nine short stories featuring the Blandings estate and its residents. The first of these novels, Something New (1915) (alternatively titled Something Fresh in British releases), was Wodehouse’s first work of farce, the chief genre for which he became known. Wodehouse had several other serialized stories in the same genre, most notably the Jeeves canon, which featured the popular characters Jeeves and Wooster, introduced in the short story collection The Man with Two Left Feet (1917). Comparable contemporary authors who used parody and humor in order to satirize the class system include E.F. Benson (Queen Lucia, 1920) and Ronald Firbank (Valmouth, 1919). Wodehouse’s works went on to inspire the likes of Evelyn Waugh, whose novel Brideshead Revisited (1945) portrays a similar vision of the British aristocracy’s fading relevance.
Key Facts about The Custody of the Pumpkin

Extra Credit for The Custody of the Pumpkin

Finding Blandings. Though Blandings Castle is entirely fictional, several attempts have been made to identify its location. In 2003, a pair of researchers from University College London used a Geographic Information System to determine that the “true” Blandings estate was most likely Apley Hall in Shropshire.

British Backlash. After using German broadcasting equipment, Wodehouse faced such severe public backlash that several libraries removed his books from their shelves, and the BBC banned his content outright. Though public attitudes eventually softened, Wodehouse was blocked from receiving a knighthood twice due to lasting resentment over the issue. 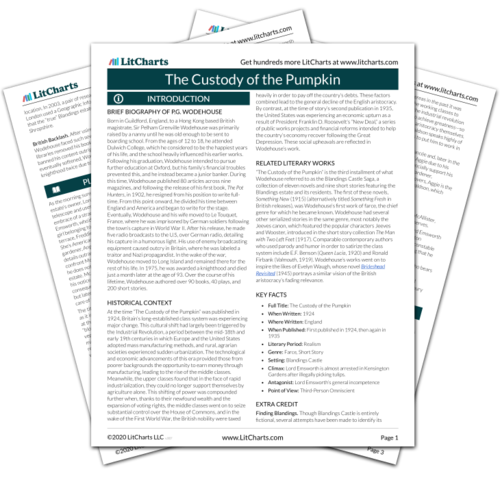 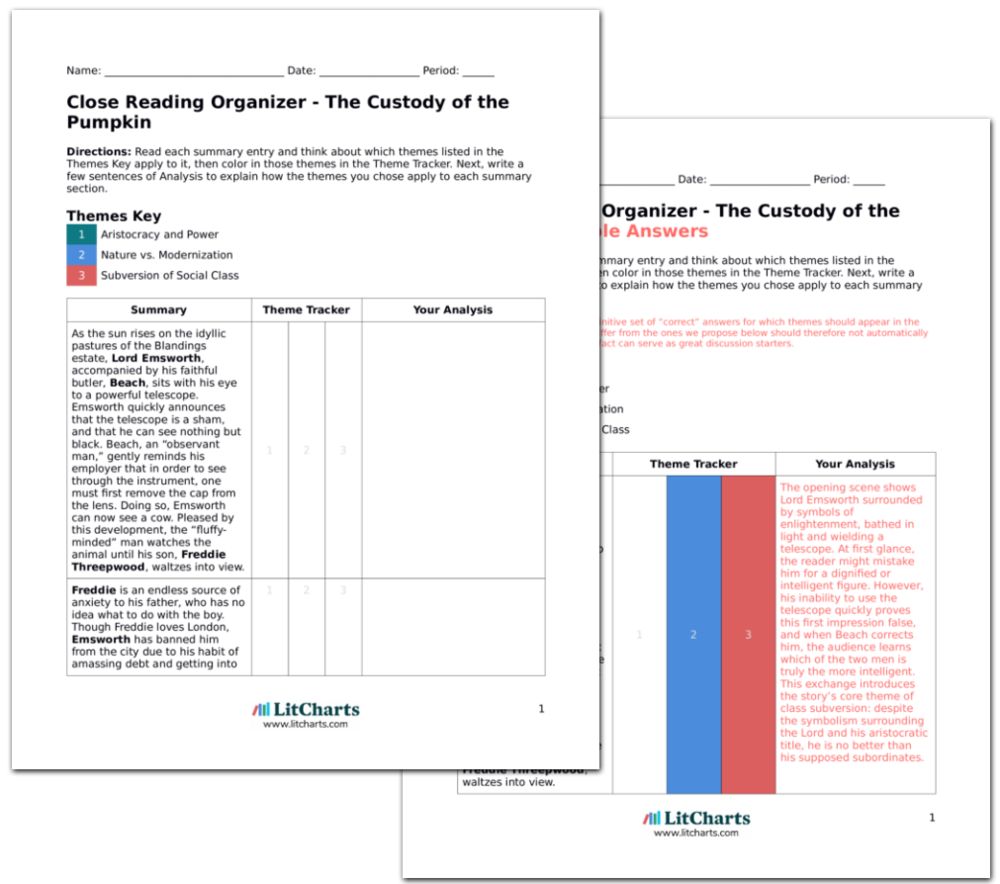