Before the colonel dies, he “suddenly” opens one eye while his daughters are gathered around his deathbed: instead of imparting last words, the colonel’s eye “glares” at the sisters, and his gaze is then extinguished in death. The colonel’s steely glare seems to have been one of his most well-known characteristics—one indicative of his authority and severity, and omnipresent even as he begins to become senile and approaches death. When his grandson Cyril comes to visit Constantia and Josephine, “Grandfather Pinner shot his eyes at Cyril in the way he was famous for.” In a story that concerns itself with both power and perception—since the sisters are unable to see a way out of their hopeless, purposeless lives—the colonel’s singular eye seems to signify both patriarchal tyranny and the sisters’ own blindness to their situation. The name “Pinner” sounds similar to “pin her”; indeed, both Constantia and Josephine are trapped and isolated by their father’s gaze, which, as a final gesture, seems to threaten the sisters, insisting that they acquiesce to his cruelty even after his death. Yet because it is only one eye, this partial gaze seems also to represent the sisters’ inability to fully comprehend their limited position in the world—one enforced by their father, whose dominating presence in their lives has made them anxious and passive, yet unable to break free from timidity and discover richer, more fulfilling lives (for fear of offending their father, who they feel continues to criticize them even after his death). The colonel’s cyclopean glare unsettles Constantia and Josephine: “Oh, what a difference it would have made, what a difference to their memory of him, how much easier to tell people about it, if he had only opened both!” By encountering their father’s one unopened eye, Constantia and Josephine seem to encounter their own cut-off perception about the world around them—a deeply uncomfortable confrontation that speaks to both patriarchy’s influence and its effects in the story.

The The Daughters of the Late Colonel quotes below all refer to the symbol of The Colonel’s Eye. For each quote, you can also see the other characters and themes related to it (each theme is indicated by its own dot and icon, like this one:

Get the entire The Daughters of the Late Colonel LitChart as a printable PDF.
"My students can't get enough of your charts and their results have gone through the roof." -Graham S.
Download 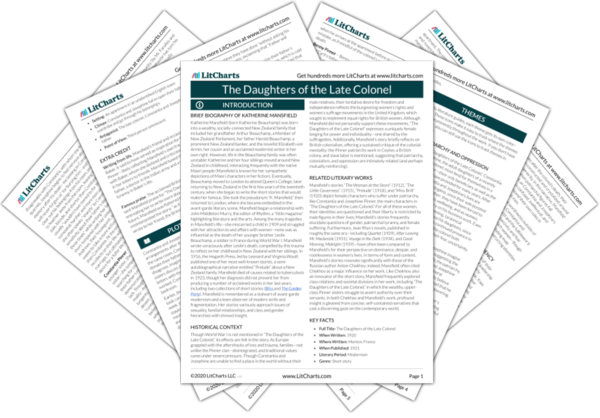 The timeline below shows where the symbol The Colonel’s Eye appears in The Daughters of the Late Colonel. The colored dots and icons indicate which themes are associated with that appearance.

...before he passed. Instead, he lay there without noticing them, and then suddenly “opened one eye” and glared at them before dying. (full context)