Download this LitChart! (PDF)
Teachers and parents! Struggling with distance learning? Our Teacher Edition on The Dew Breaker can help.

Welcome to the LitCharts study guide on Edwidge Danticat's The Dew Breaker. Created by the original team behind SparkNotes, LitCharts are the world's best literature guides.

A concise biography of Edwidge Danticat plus historical and literary context for The Dew Breaker.

A quick-reference summary: The Dew Breaker on a single page.

In-depth summary and analysis of every part of The Dew Breaker. Visual theme-tracking, too.

Explanations, analysis, and visualizations of The Dew Breaker's themes.

Description, analysis, and timelines for The Dew Breaker's characters.

Explanations of The Dew Breaker's symbols, and tracking of where they appear.

An interactive data visualization of The Dew Breaker's plot and themes.

Edwidge Danticat was born in Port-au-Prince, and while she was still a young child her parents immigrated to the US—first her mother and then her father, two years later. Danticat and her brother remained in Haiti and were raised by their grandparents. As a child, Danticat described feeling a sense of “awe” when she heard people telling stories, and at nine, she started writing herself. At 12, she moved to Brooklyn to join her parents. They lived in the Haitian diasporic community in which The Dew Breaker is set. Danticat attended Clara Barton High School, a Brooklyn high school dedicated to training students in nursing or related health professions, and then Barnard College, where she majored in French literature. In 1993, she earned an MFA in Creative Writing from Brown University, and her thesis became her first published novel, Breath, Eyes, Memory (2004). She has since written over a dozen books, received numerous prizes, including the National Book Critics Circle Award and the MacArthur “Genius” grant, and taught creative writing in New York and Miami. She has also worked on several documentaries. In 2014, she received an honorary doctorate from Brooklyn College. She is married, with two children.
Get the entire The Dew Breaker LitChart as a printable PDF.
"My students can't get enough of your charts and their results have gone through the roof." -Graham S.
Download 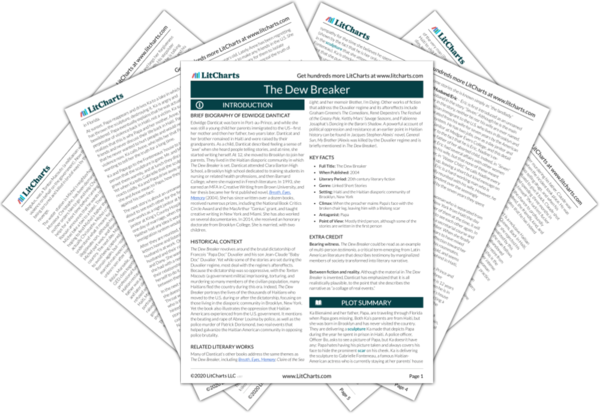 Historical Context of The Dew Breaker

The Dew Breaker revolves around the brutal dictatorship of Francois “Papa Doc” Duvalier and his son Jean-Claude “Baby Doc” Duvalier. Yet while some of the stories are set during the Duvalier regime, most deal with the regime’s aftereffects. Because the dictatorship was so oppressive, with the Tonton Macouts (a government militia) imprisoning, torturing, and murdering so many members of the civilian population, many Haitians fled the country during this era. Indeed, The Dew Breaker portrays the lives of the thousands of Haitians who moved to the U.S. during or after the dictatorship, focusing on those living in the diasporic community in Brooklyn, New York. Yet the book also illustrates the oppression that Haitian Americans experienced from the U.S. government. It mentions the beating and rape of Abner Louima by police, as well as the police murder of Patrick Dorismond, two real events that helped galvanize the Haitian American community in opposing police brutality.

Other Books Related to The Dew Breaker

Many of Danticat’s other books address the same themes as The Dew Breaker, including Breath, Eyes, Memory; Claire of the Sea Light; and her memoir Brother, I’m Dying. Other works of fiction that address the Duvalier regime and its aftereffects include Graham Greene’s The Comedians, René Depestre’s The Festival of the Greasy Pole, Kettly Mars’ Savage Seasons, and Fabienne Josaphat’s Dancing in the Baron’s Shadow. A powerful account of political oppression and resistance at an earlier point in Haitian history can be found in Jacques Stephen Alexis’ novel, General Sun, My Brother (Alexis was killed by the Duvalier regime and is briefly mentioned in The Dew Breaker).
Key Facts about The Dew Breaker

Extra Credit for The Dew Breaker

Bearing witness. The Dew Breaker could be read as an example of multi-person testimonio, a critical term emerging from Latin American literature that describes testimony by marginalized members of society transformed into literary narrative.

Between fiction and reality. Although the material in The Dew Breaker is invented, Danticat has emphasized that it is all realistically plausible, to the point that she describes the narrative as “a collage of real events.” 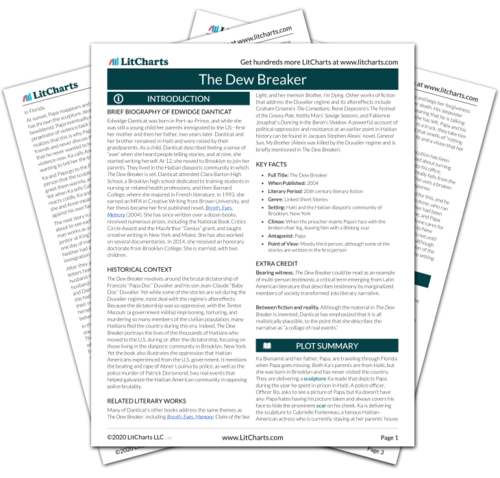 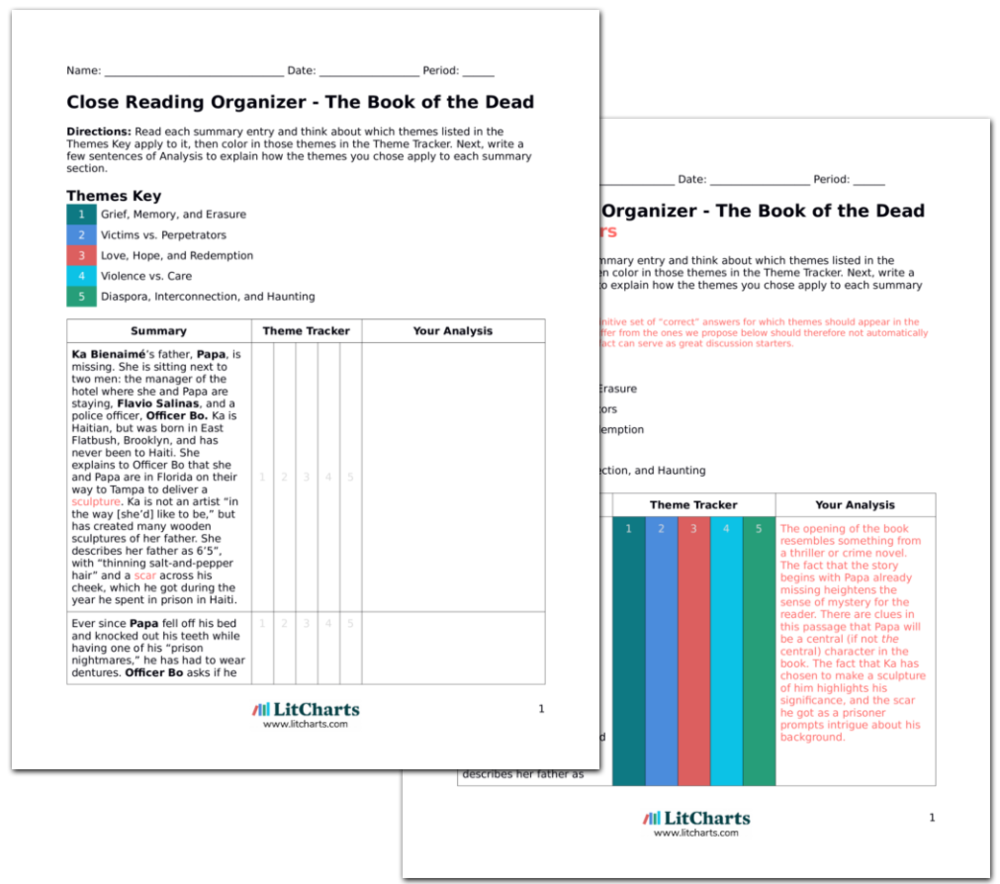