Get LitCharts A+
Reyna, Mago, and Carlos’s youngest full sibling, who was born in America while Mami was living there with Papi. Betty is separated from her three older siblings both by age and the fact that she was born in another country, and because Juana had to escape Natalio’s abuse with Betty in tow, Betty often becomes a bargaining chip between her two parents. Betty eventually moves to the United States with Juana, Juana’s second husband Rey, and their child Leonardo, but only sees Reyna, Mago, and Carlos occasionally. As she grows older, Betty gets involved in gangs and winds up a teen mother, whereas her other siblings, constantly pressured by their father, make more traditional choices.

Betty Quotes in The Distance Between Us

The The Distance Between Us quotes below are all either spoken by Betty or refer to Betty. For each quote, you can also see the other characters and themes related to it (each theme is indicated by its own dot and icon, like this one:

). Note: all page numbers and citation info for the quotes below refer to the Washington Square Press edition of The Distance Between Us published in 2012.
Book One: Chapter 14 Quotes

They hung Catalina by her feet so that the river would drain out of her. We all kneeled and prayed, and not once did I take my eyes off my cousin's bloated body, and I shuddered at seeing her like that, hanging by her feet, like the chickens at the meat section in el mercado, just as cold and lifeless. I was gripped with a fear so great, it made my stomach churn. What if something happened to me, Mago, Carlos, or Betty? What if, by the time Papi finishes his dream house, there’s no one left for him to keep safe? Or what if he never finishes it, what if he never returns, and we are left here to face the wolf all on our own?

Tía Güera had decided to leave her no-good husband and try her luck in this country. Mami was taking that as an opportunity to bring Betty here. So Tia Güera and Betty would both be making the long journey north together. The only thing was, Tia Güera said, that she would have to leave her own daughter behind with Abuelita Chinta. It made me sad to think of my cousin Lupita, of how now she was the one being abandoned, and I hoped that one day the cycle of leaving children behind would end.

Unlock with LitCharts A+
Get the entire The Distance Between Us LitChart as a printable PDF.
"My students can't get enough of your charts and their results have gone through the roof." -Graham S.
Download 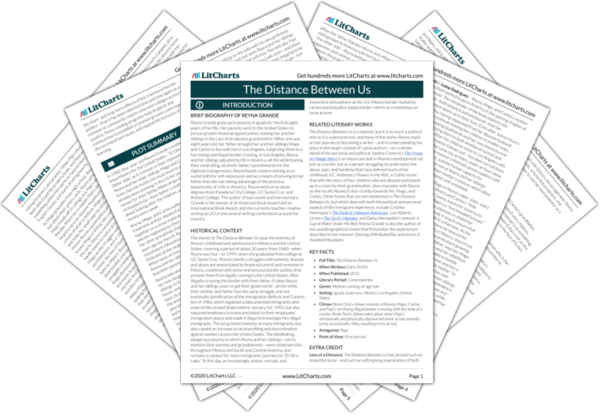 Betty Character Timeline in The Distance Between Us

The timeline below shows where the character Betty appears in The Distance Between Us. The colored dots and icons indicate which themes are associated with that appearance.

...Mami hugs each of them first, and as they reluctantly greet her and the baby, Betty, Evila loudly gives thanks that she has three fewer mouths to feed at last. The... (full context)

...her orders, and when Reyna and Mago stay behind, she asks them to look after Betty. Mago refuses to hold the baby, though, and runs out of the house. (full context)

Reyna brings Betty outside and sits down with Mago. She begins crying, unsure of why she still feels... (full context)

When Papi tossed Mami out of the apartment, he did not allow her to take Betty, and refused to let her see the child any longer. Every day, though, Mami would... (full context)

When the three of them return home, they find that Betty is hysterically sobbing; Abuela Chinta has spilled boiled water on her, and is frantically trying... (full context)

...and her siblings up many nights with her sobbing, and becomes irate when the young Betty doesn’t seem to recognize her. Privately, Reyna wonders if her mother would have returned if... (full context)

...is giving away parcels of land nearby to anyone who occupies it. Mami, Mago, Carlos, Betty, and Reyna all set off for a meadow on the other side of a river,... (full context)

...it’s fine if they go—though they need to tell their father that he can’t have Betty. When Mago delivers Mami’s message, Papi is furious, claiming that Mami has robbed him of... (full context)

...dancing while dusting the counter. They startle her from her daydream and beg to take Betty with them, asking how she could bear to separate her children. Mami is resolute, though—Betty... (full context)

...ran into her downtown—she lives there, on a street called San Pedro. Mago asks if Betty is here, too, and Papi drains his beer before replying that Mami left Betty in... (full context)

...withdraws from them, locking himself up in his room after railing against Mami for using Betty to get back at him. Mago is on Papi’s side—she doesn’t see why they should... (full context)

Mago writes to Abuelita Chinta to ask about Betty, and a month later, Tía Güera writes back. She explains that come summer, Mami is... (full context)

Once Tia Güera and Betty arrive in the U.S., Reyna and Carlos at last convince Papi to let them go... (full context)

...Mami every Sunday, though this displeases Papi. He only allows them to go because of Betty. Mami frequently takes the children out to parks and shopping malls, but everywhere they go,... (full context)

...to learn English and try to get a better job. She frequently pulls Leonardo and Betty out of elementary school to take them on trips to Mexico—she doesn’t care much about... (full context)

A few weeks later, Reyna joins Mago, Mami, Leonardo, and Betty on their trip. Papi is furious that she is missing a week in school, and... (full context)

...hospital because Papi pushed her down the stairs and onto some gardening tools. Reyna takes Betty, who is visiting, to her room to avoid Papi. Some time later, Reyna is awakened... (full context)

That night, when Reyna takes Betty home to Mami’s, Mami offers Reyna the chance to come stay with her. For the... (full context) 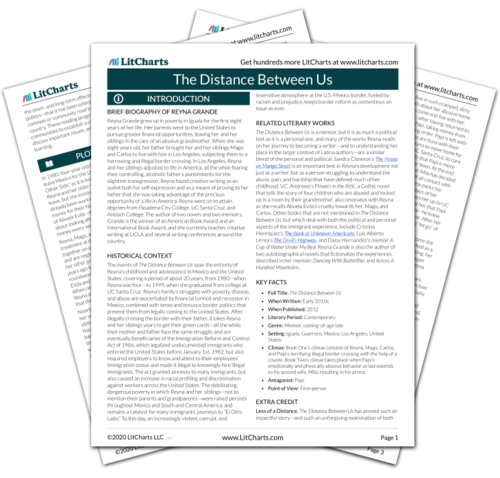 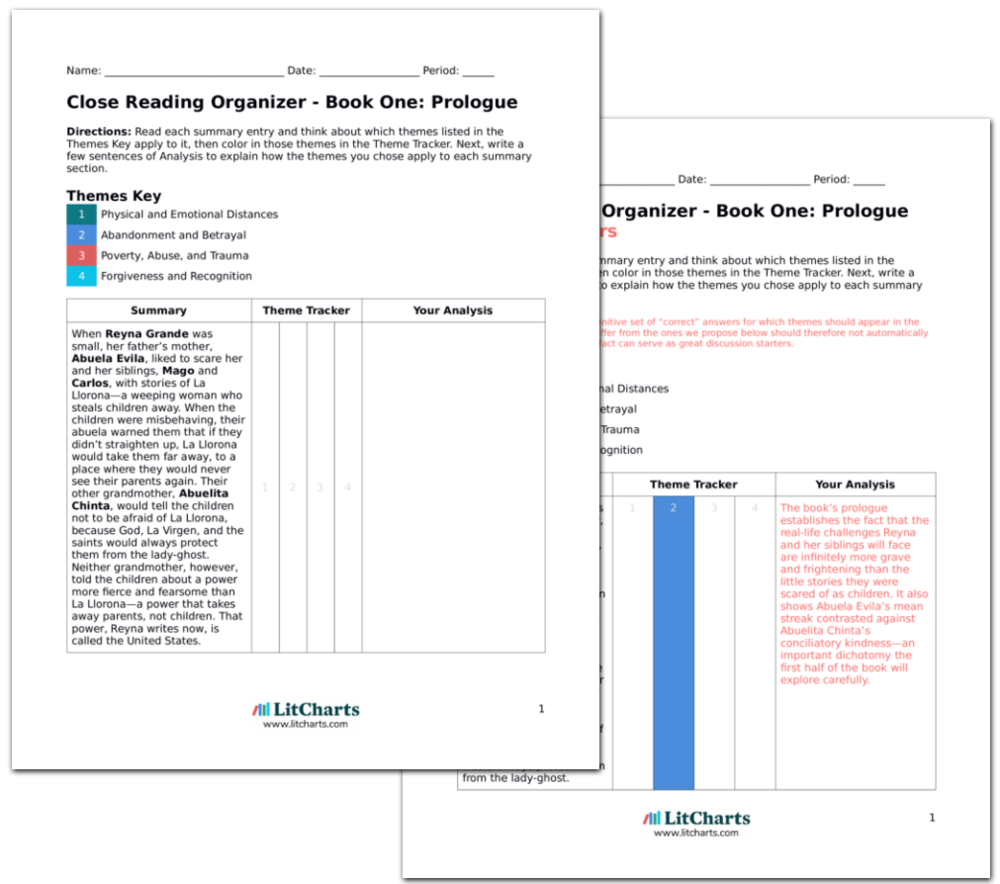