Upgrade to A+
Introduction
Plot Summary
Detailed Summary
& Analysis
Themes
Quotes
Characters
Symbols
Theme Wheel
Mrs. Delaney is Mick’s nameless, long-suffering wife and Larry’s mother. A victim of Mick’s carousing, she has to clean up his messes when he drinks, making excuses for him at work when he’s hung over and pawning household items to make up for the money he’s squandered. The reader is never told how she feels about her husband, but she hasn’t left him, so it seems that she has somewhat resigned herself to his antics. That said, she screams furiously at Mick when he brings Larry home drunk, which suggests that she isn’t taking all of it lying down. Mrs. Delaney clearly loves Larry and cares about him deeply, but she inadvertently puts him in danger by insisting that he accompany Mick to Mr. Dooley’s funeral in order to act as a “brake” on Mick’s drinking. Not only does this unfairly burden Larry by making him responsible for the family’s wellbeing, but it also sets him up for failure; Larry has never succeeded in preventing his father from drinking before, and he only succeeds this time by getting drunk himself. While Mrs. Delaney thanks Larry profusely for keeping Mick from drinking, this episode corrupts Larry’s innocence and humiliates him in front of the neighbors—both huge prices for a child to pay. Much like her husband and son, Mrs. Delaney has an eye on the opinions of “the road”—their acquaintances and neighbors—and she is mortified that so many people have witnessed Larry’s drunkenness and Mick’s cruelty.

Mrs. Delaney Quotes in The Drunkard

The The Drunkard quotes below are all either spoken by Mrs. Delaney or refer to Mrs. Delaney. For each quote, you can also see the other characters and themes related to it (each theme is indicated by its own dot and icon, like this one:

). Note: all page numbers and citation info for the quotes below refer to the Vintage edition of The Drunkard published in 1982.
The Drunkard Quotes

Between business acquaintances and clerical contacts, there was very little [Mr. Dooley] didn’t know about what went on in town, and evening after evening he crossed the road to our gate to explain to Father the news behind the news. He had a low, palavering voice and a knowing smile, and Father would listen in astonishment, giving him a conversational lead now and again, and then stump triumphantly in to Mother with his face aglow and ask: “Do you know what Mr. Dooley is after telling me?”

Unlock explanations and citation info for this and every other The Drunkard quote.

Drink, you see, was Father’s great weakness. He could keep steady for months, even for years, at a stretch, and while he did he was as good as gold. […] He laughed at the folly of men who, week in week out, left their hard-earned money with the publicans; and sometimes, to pass an idle hour, he took pencil and paper and calculated precisely how much he saved each week through being a teetotaller. […] Sooner or later, [his] spiritual pride grew till it called for some form of celebration. Then he took a drink […]. That was the end of Father. […] Next day he stayed in from work with a sick head while Mother went off to make his excuses at the works, and inside a forthnight he was poor and savage and despondent again. Once he began he drank steadily through everything down to the kitchen clock. Mother and I knew all the phases and dreaded all the dangers.

I knew Father was quite capable of lingering [at the pub] till nightfall. I knew I might have to bring him home, blind drunk, down Blarney Lane, with all the old women at their doors, saying: “Mick Delaney is on it again.” I knew that my mother would be half crazy with anxiety; that next day Father wouldn’t go out to work; and before the end of the week she would be running down to the pawn with the clock under her shawl.

“But I gave him no drink,” he shouted, aghast at the horrifying interpretation the neighbours had chosen to give his misfortune. “He took it while my back was turned. What the hell do you think I am?” “Ah,” she replied bitterly, “everyone knows what you are now. God forgive you, wasting our hard-earned few ha’pence on drink, and bringing up your child to be a drunken corner-boy like yourself.”

“My brave little man!” she said with her eyes shining. “It was God did it you were there. You were his guardian angel.”

Unlock with LitCharts A+
Get the entire The Drunkard LitChart as a printable PDF.
"My students can't get enough of your charts and their results have gone through the roof." -Graham S.
Download it! 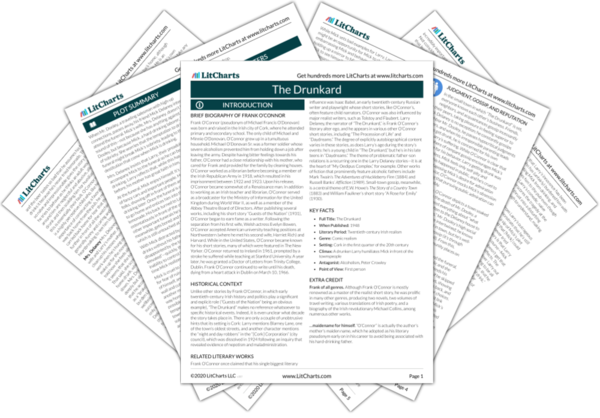 The timeline below shows where the character Mrs. Delaney appears in The Drunkard. The colored dots and icons indicate which themes are associated with that appearance.

Mick resolves to go the funeral, which his wife, Mrs. Delaney , discourages. Mick tells her that others would talk if he didn’t attend, but she... (full context)

...he needs to take Larry home, and Mick moans about his “misfortune,” since he knows Mrs. Delaney will be mad. He “snarls” that women should “look after their children themselves.” Mick then... (full context)

...again. Mick wipes Larry’s forehead, chops wood for the fire, and sets the table. When Mrs. Delaney gets home, she screams at Mick for what he’s done to Larry, but he shushes... (full context)

Mrs. Delaney goes to check on Larry, but Mick appears in the doorway, criticizing his wife for... (full context)

The next day, Mick goes to work as usual, and Mrs. Delaney showers Larry with affection, letting him stay home from school until his cut eye heals.... (full context) 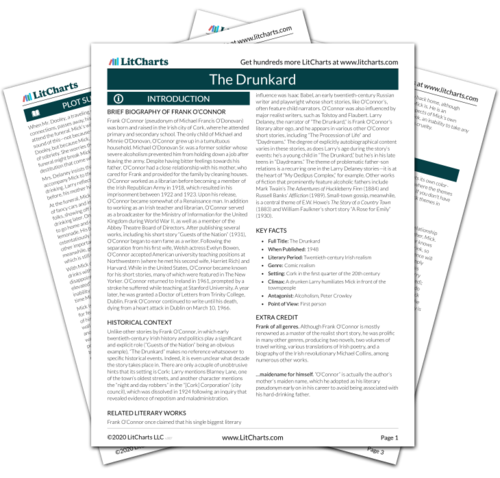 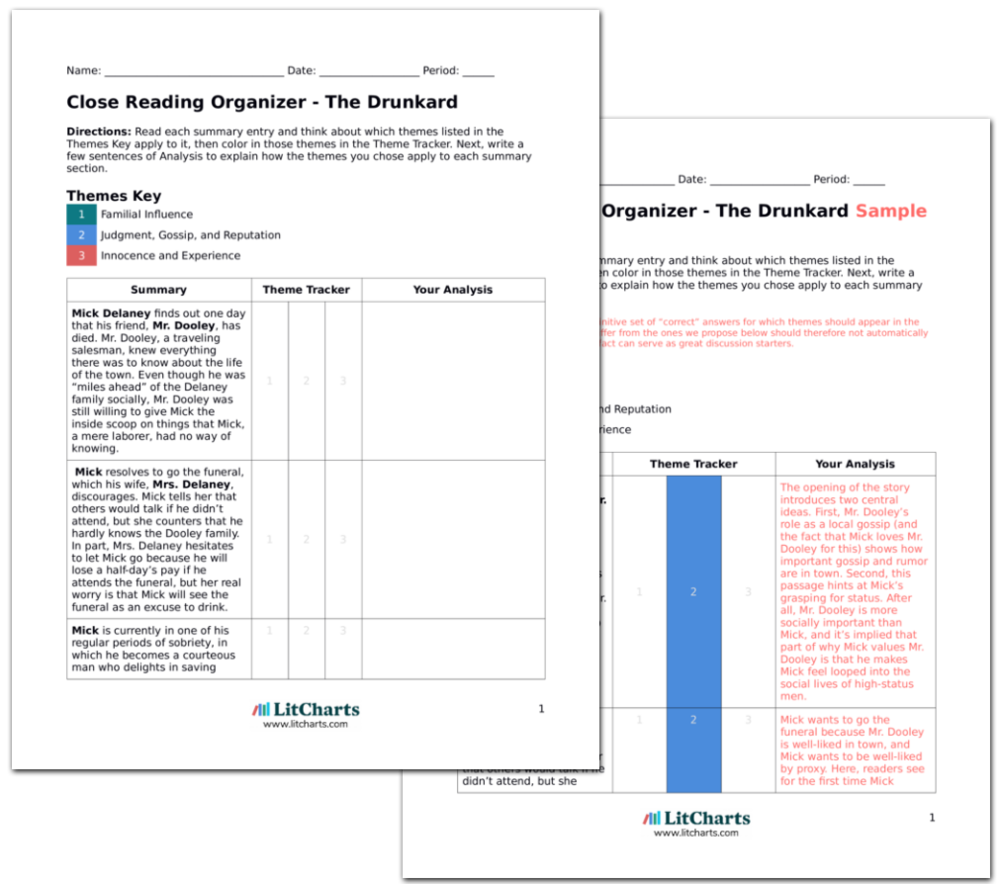