Antonio introduces the symbol of poison in the play’s opening while making a political analogy about the ideal government, which, he says, should function like a fountain. Goodness should flow through the country, but if someone poisons the well then death and disease will spread. From this point forward, poisons serve as tools of the corrupt government and become symbols for corruption itself, for hidden threats, and for secrecy. The Cardinal, for example, tells Julia that his secrets are like lingering poisons that would slowly spread through her veins and cause her death. Once she gets the secrets out of him, the Cardinal then kills Julia by making her kiss a literally poisoned book.

Poison Quotes in The Duchess of Malfi

The The Duchess of Malfi quotes below all refer to the symbol of Poison. For each quote, you can also see the other characters and themes related to it (each theme is indicated by its own dot and icon, like this one:

A prince's court
Is like a common fountain, whence should flow
Pure silver drops in general; but if't chance
Some cursed example poison't near the head,
Death and diseases through the whole land spread.
And what is't makes this blessèd government
But a most provident council, who dare freely
Inform him the corruption of the times.

This foul melancholy
Will poison all his goodness, for, I'll tell you,
If too immoderate sleep be truly said
To be an inward rust unto the soul,
It then doth follow want of action
Breeds all black malcontents, and their close rearing,
Like moths in cloth, do hurt for want of wearing.

You live in a rank pasture here, i'th' court.
There is a kind of honey-dew that's deadly:
'Twill poison your fame. Look to't. Be not cunning,
For they whose faces do belie their hearts
Are witches ere they arrive at twenty years,
Ay, and give the devil suck.
…
Your darkest actions - nay, your privat'st thoughts –
Will come to light.

It may be that the sudden apprehension
Of danger - for I'll go in mine own shape –
When he shall see it fraught with love and duty,
May draw the poison out of him, and work
A friendly reconcilement. If it fail,
Yet it shall rid me of this infamous calling;
For better fall once than be ever falling.

Unlock with LitCharts A+
Get the entire The Duchess of Malfi LitChart as a printable PDF.
"My students can't get enough of your charts and their results have gone through the roof." -Graham S.
Download 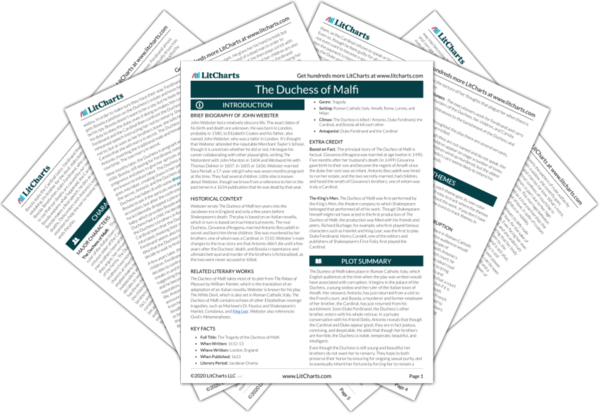 Poison Symbol Timeline in The Duchess of Malfi

The timeline below shows where the symbol Poison appears in The Duchess of Malfi. The colored dots and icons indicate which themes are associated with that appearance.

...good flows throughout the land when it is properly functioning, but if the fountain is poisoned near the head, death and disease flow to the country. The king is also surrounded... (full context)

...because he has heard that Bosola is very valiant. Bosola’s bad mood, Antonio says, will poison all of Bosola’s goodness, since, just as insufficient sleep hurts the body, idleness breeds unhappiness... (full context)

...sermon. Ferdinand continues that she currently lives in a high position, and that remarrying will poison her reputation. He tells her not to be cunning, since those whose faces contradict their... (full context)

...says both will be safe, since she will keep the secret and guard it like poison makers guard their poison from children. The Duchess then instructs Cariola to hide behind a... (full context)

...preserve the secret. He says that to keep people away, they can say that Bosola poisoned the apricots and caused the Duchess to fall ill, but Antonio responds that this will... (full context)

...in such chaos that while Bosola privately wonders if the apricots were in fact somehow poisoned without his knowledge. A servant reveals that a Swiss guard had entered the Duchess’s bedchamber... (full context)

...Antonio then questions whether the apricots Bosola gave the Duchess earlier in the day were poisoned. Bosola denies the accusation of poisoning, but Antonio says that some jewels were stolen and... (full context)

...all been sent to their rooms. He suspects that he will be formally accused of poisoning the Duchess, but says he’ll laugh at the charge. He remembers that Castruccio is heading... (full context)

...has dug up a mandrake, which is known as being both an aphrodisiac and a poison. Ferdinand says he is growing mad and he shows the Cardinal the letter, saying that... (full context)

...and Bosala says that he certainly does. Ferdinand dismisses these tricks as either lies or poisons that drive people insane. The only witchcraft, he says, is in the Duchess’s “rank blood.” (full context)

...Duchess enters, and Bosola greets her kindly, to which she responds that he is wrapping poison in gold and sugar. Bosola relays Ferdinand’s message: Ferdinand is going to visit her, but... (full context)

...he will go undisguised and with love, and in doing so try to draw “the poison out of” the Cardinal and reconcile with the brothers. If he fails, he says, it’s... (full context)

...says that learning the secret will bring about her ruin and will act like a poison in her, but she continues to press until he tells her that the Duchess and... (full context)

...secret. Once she does it, he announces that her curiosity has killed her, as he poisoned the book because he knew she couldn’t keep the secret. Bosola hastily emerges from the... (full context) 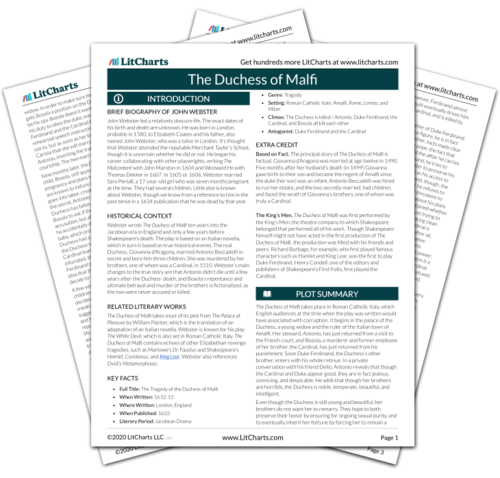 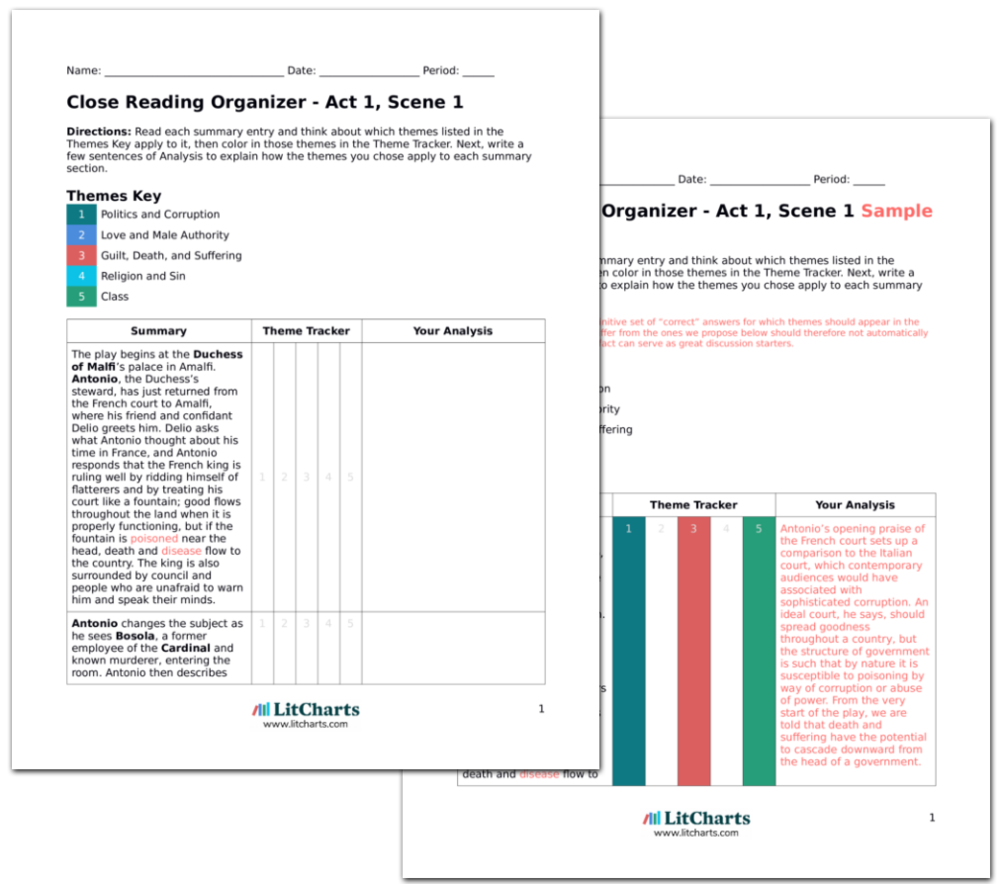