Ben’s newspaper symbolizes his struggle to exert power over Gus and also the broader link between power, violence, and intimidation. The Dumb Waiter opens with Ben reading a newspaper, as he does sporadically throughout the play. From the start, Ben’s newspaper establishes him as the more educated, refined, and competent of the two characters (as Ben reads the newspaper, Gus struggles to tie his shoelaces), and this suggests that he is the pair’s “senior partner”—the one with the higher social status. The newspaper’s symbolic resonance comes from the way Ben uses it as a prop to exert his dominance over Gus. Throughout the play, Ben repeatedly “slams” the newspaper onto his bed or lowers it so that he can stare at Gus whenever Gus does or says something that Ben perceives as a threat to his power. For instance, after Gus suggests that a story about a young boy who watched his sister kill a cat is wrong—that it was actually the boy who killed the cat and lied that his sister did it—Ben agrees with Gus, and then he violently slams the paper onto the bed. Ben seems intimidated by Gus’s perceptive take on the story, perhaps believing that Gus’s insight jeopardizes Ben’s status as the smarter and more powerful partner—or that Gus is intentionally trying to undermine Ben. To ensure that Gus remembers that Ben is in charge, Ben slams the paper onto the bed in a violent gesture that warns Gus that there will be consequences—potentially violent ones—if Gus inadvertently challenges Ben’s authority again.

The The Dumb Waiter quotes below all refer to the symbol of Ben’s Newspaper . For each quote, you can also see the other characters and themes related to it (each theme is indicated by its own dot and icon, like this one:

BEN. It’s enough to make you want to puke, isn’t it?

GUS. Who advised him to do a thing like that?

BEN. A man of eighty-seven crawling under a lorry!

BEN. It’s down here in black and white.

Get the entire The Dumb Waiter LitChart as a printable PDF.
"My students can't get enough of your charts and their results have gone through the roof." -Graham S.
Download 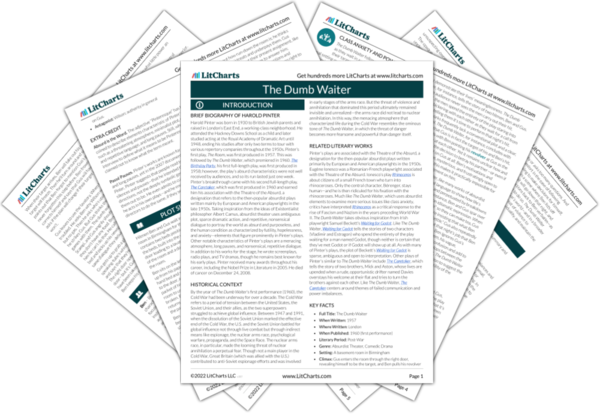 The timeline below shows where the symbol Ben’s Newspaper appears in The Dumb Waiter. The colored dots and icons indicate which themes are associated with that appearance.

...leads to a passage to their right. Ben lies on the left bed reading a newspaper. Gus is sitting on the right bed, struggling to tie his shoes. The men are... (full context)

...puts his shoes back on and exits through the left door. Frustrated, Ben drops his paper on the bed. He stares at the door. There’s the sound of a lavatory chain... (full context)

Ben cries out, “Kaw!” Then he picks up his paper and tells Gus about a story he just read about an elderly man who couldn’t... (full context)

...set out. He plans to tell “him” that the crockery is nice. Ben reads his paper silently while Gus goes on about how nice the crockery is. Ben asks Gus why... (full context)

...he repeats that he has a question for Ben. Ben ignores Gus and slams his paper onto the bed. Then Ben describes another story. This one is about an eight-year-old girl... (full context)

...of it. Ben asks what Gus is talking about, then he returns to reading his paper. They hear the lavatory flush. (full context)

...on the bloody kettle,” Ben orders Gus. Then, realizing what he’s said, Ben slams his paper down on his bed and drops his head into his hands. (full context)

...explaining that he means “That girl.” Gus asks Ben how many times he’s read the paper. Ben accuses Gus of “criticising” him. He threatens to hit Gus if Gus doesn’t cut... (full context) 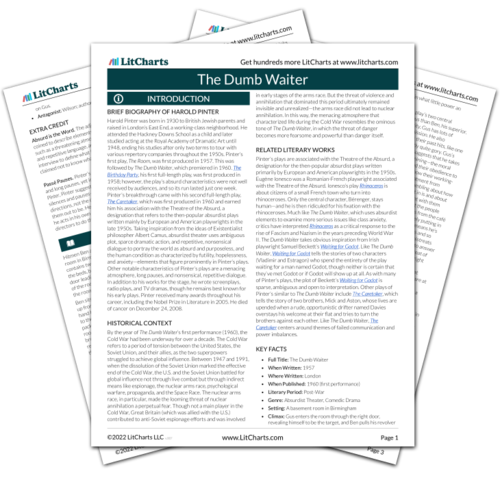 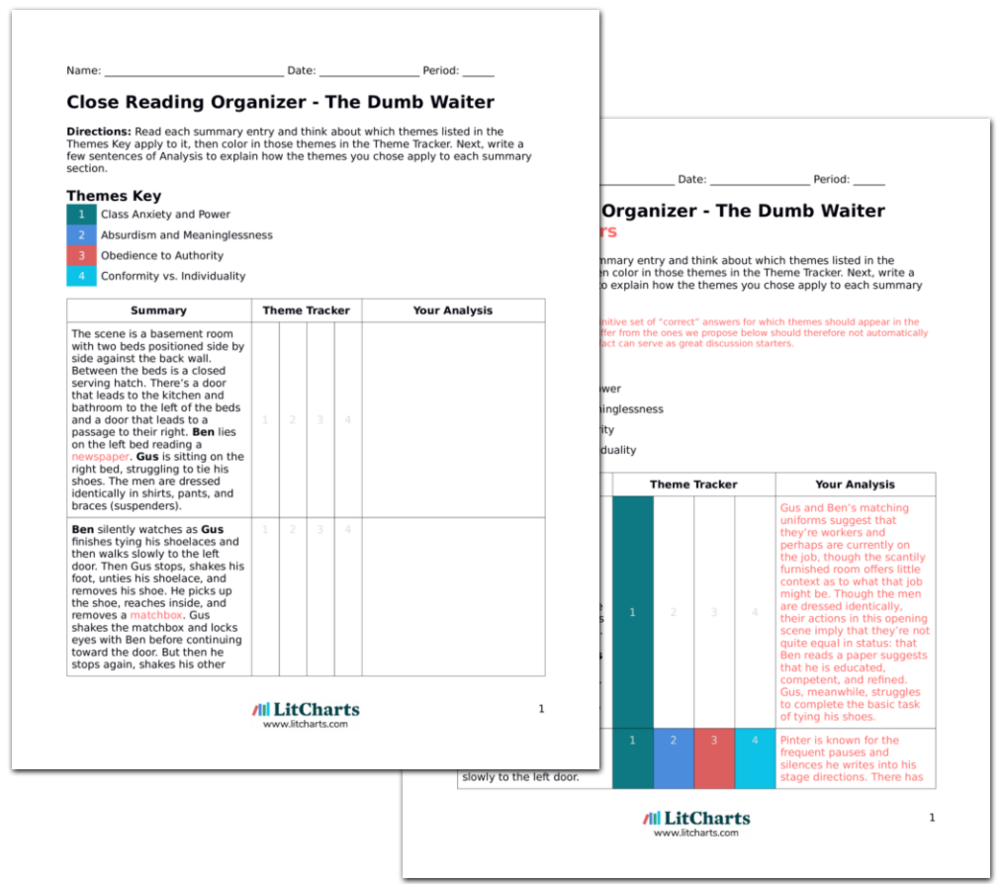