In October of 2006, Greer Kadetsky is a freshman at a small, undistinguished college in Southern Connecticut called Ryland College. She has been at school for seven weeks and has had a miserable time so far—she is jealous of her boyfriend, Cory Pinto, who is off at the much more prestigious Princeton University, and has been unsuccessful in making any friends of her own at Ryland. One evening, Greer attends a fraternity party. One of the fraternity boys, Darren Tinzler, engages Greer in a conversation, but when he makes a sexual advance, Greer rejects him, and Tinzler reacts violently. As the weeks go by, Greer hears about at least six other women who have been harassed by Darren Tinzler, and after he commits yet another assault, the university holds a disciplinary hearing. Tinzler gets off with a slap on the wrist, and Greer wants to take a stand, but the other girls are ready to move on and don’t want to dwell on the injustice of the situation.

One evening, Greer’s friend Zee Eisenstat invites Greer to join her at a lecture on campus—Zee’s idol, the feminist writer and figurehead Faith Frank, is giving a hotly anticipated speech. Greer tags along and instantly finds herself transfixed by Faith. After the lecture, Greer approaches Faith in the restroom and begins speaking to her. Faith is warm and receptive and advises Greer to keep her head down and focus on her studies. Zee gets the chance to speak with Faith briefly, too, but despite the fact that Zee is Faith’s true fan, Faith gives her business card only to Greer before leaving the restroom.

Greer takes a bus to New York City to interview for a position at Faith Frank’s feminist magazine, Bloomer. However, when she gets to the office, she learns that the publication is about to fold. That night, Greer writes Faith an email, thanking Faith for her tireless work on behalf of women everywhere. Meanwhile, Cory, who has received a cushy consulting job, is informed that he will be working in the company’s Manila office—not in New York like he anticipated.

One night, Greer she receives an email from Faith Frank thanking her for her note a few months earlier and offering her the chance to interview for a position at her new “venture.” At the interview a few days later, Faith tells Greer that she is partnering with the famous venture capitalist Emmett Shrader to start a women’s foundation, which will connect speakers and audiences around the country to discuss some of the most important issues facing modern feminism. She offers Greer a position at the company, and Greer happily accepts. Soon after, Zee gives Greer a letter to pass along to Faith. It details Zee’s desire to work at the new foundation, Loci. Although Zee is excited by the prospect of working with her best friend, Greer has some reservations.

Once at Loci, Greer is slightly disillusioned with the mundanity of her job, but she is excited to spend whatever time she can around the alluring Faith Frank. Greer tells Faith about Zee’s letter and how Greer doesn’t want to hand it over to Faith. Faith says that in the end, it’s ultimately up to Greer. The next time Greer sees Zee, Greer lies and says that though Faith read the letter, there are no positions available at Loci.

Cory is on his way home from the Philippines—there has been a tragedy in his family. His mother, Benedita, accidentally ran over Cory’s little brother Alby while pulling out of the driveway, crushing and killing him. Alby had been crouched on his stomach in the driveway studying his pet turtle, Slowy, at the time of his death. Shortly after Alby’s funeral, Cory’s father returns to his home country of Portugal, leaving Cory to attend to his grieving mother. As Benedita teeters on the brink of psychosis, Cory realizes that he must quit his job, stay home with his mother, and take on her job of cleaning houses. He experiments with dangerous drugs but ultimately finds himself more interested in playing his brother’s old video games than getting high.

Desperate for a change from her claustrophobic hometown and boring paralegal job, Zee takes a job with Teach and Reach, an organization that places young college graduates as teachers in at-risk public schools. Zee moves to Chicago and begins teaching, but she finds it difficult to connect with her students—the problems they face are much larger than she anticipated. Zee finds herself drawn to a beautiful guidance counselor at the school, Noelle Williams, but Noelle is icy to her. One afternoon, one of Zee’s students, Shara Pick, asks to go to the bathroom but does not return. Zee finds Shara on the floor of the bathroom, clutching her stomach in immense pain. It is soon clear that Shara is pregnant and is going into labor. Shara delivers her baby in the nurse’s office, and after the traumatic event is over, Noelle and Zee go out to dinner together to decompress. Over the course of their meal, Noelle explains that she is frustrated by pseudo-activists like Zee who think they can swoop into poor communities and make a difference. Both women admit that they are attracted to one another, and at the end of the night, they go home together.

One night, Faith Frank reflects on the events of her life which have brought her to the point she’s at now. Faith was born and raised in Brooklyn but was sheltered by her conservative parents. As she moved through college, she became more socially and politically aware, and after graduation, she and her friend Annie moved to Las Vegas to work as cocktail waitresses and explore the world. Faith explored her sexuality and slept with many men but found most encounters disappointing—all save for a brief, non-physical flirtation with a man she served at a blackjack table. While out in Las Vegas, Annie became pregnant and was forced to subject herself to a shady procedure in an unmarked building. Later that night, Faith took her friend to the ER and was shocked and appalled by the judgmental and cruel treatment Annie received from the nurses and doctors. Faith soon moved to New York and became involved with a women’s liberation group and centered her politics around securing abortion reform for women, using Annie’s story as a touchstone. When Annie found out that Faith had told her story to her women’s group, she became angry. She soon moved to the Midwest, married a lawyer, and eventually became an ultra-conservative pro-life senator.

Meanwhile, Faith and several of her friends started a women’s magazine called Bloomer. While struggling to secure ad space, Faith and her editors met with three Nabisco executives, one of whom recognized Faith from Las Vegas—they had flirted once at the blackjack table. The Nabisco executive, Emmett Shrader, offered to take Faith out to dinner, and their “meeting” quickly turned into a sexual encounter. The next morning, Emmett called Faith to tell her that his wife found out about the affair, and that he would not be purchasing ad space in Faith’s magazine. The magazine succeeded without Emmett’s contribution, however, and Faith rose to prominence as a feminist writer, public speaker, and icon. Nearly forty years later, after Bloomer folded, Faith received a call from Emmett, who offered to bankroll a new venture with Faith at the head—a women’s organization called Loci. Now, Faith considers how she must pass along the success, passion, and knowledge she has gained over the years to the next generation. She decides to let Greer Kadetsky deliver the keynote speech at the next summit.

At the summit, Greer prepares to deliver a speech alongside a young Ecuadorian women, Lupe Izurieda. Once a victim of sex trafficking, Lupe was rescued by a Loci-backed initiative and placed in a Loci-sponsored mentorship program. Greer is excited to share Lupe’s story, but Lupe is nervous, touchy, and emotional. The speech goes off without a hitch—Greer lauds the mentorship program, and Lupe testifies to how much it has helped her—and the audience applauds both Greer and Lupe wildly.

Back in New York, Greer meets with Kim, a former employee of ShraderCapital, Emmett Shrader’s venture capital firm, which financially backs Loci. Kim reveals that the Loci mentorship program never got off the ground, and that ShraderCapital, wanting to avoid a PR scandal, continued accepting donations meant for the program. Greer is shaken by the news and immediately confronts Faith, who reacts coolly but claims that she knew nothing of the deception. She is disgusted by the hypocrisy and the incompetence at ShraderCapital but tells Greer that she plans to move forward as if nothing has happened. Greer is shocked, but Faith explains that compromise is part of her line of work. Soon after this unsettling conversation, Greer quits. Faith tells Greer that she is a hypocrite—she is quitting because she cares too much about women to work at a shady organization, but she failed to stand up for her friend Zee when it mattered most.

Greer visits Zee, who is now a respected traumatologist working in Chicago and living with Noelle. When Greer reveals the massive lie she told her friend years ago, Zee is deeply hurt by the news, and the visit is cut short. Greer returns to her hometown to take some time for herself before looking for a job again. Greer still looks down on Cory’s choice to stay in his hometown, but Greer’s mother believes that Cory, who has dedicated his life to supporting his grieving mother, is actually a “big feminist.”

Cory gets the chance to meet with an angel investor and pitch his idea for a game called SoulFinder—a game in which players wander the earth looking for a lost loved one, but they are often unable to complete their mission and beat the game due to the inescapable nature of grief. The investor is impressed by Cory’s idea and asks him to come to New York to see an immersive theater piece which might help with game development. Cory stays on Greer’s sofa bed for the weekend, but there is a palpable sense of tension between the two of them, as they do not know each other very well anymore.

A few years later, Greer attends a fancy publishing party to celebrate the fact that her own feminist text, Outside Voices, has been on the bestseller list for over a year. Greer, now thirty-one, is married to Cory and has a daughter named Emilia. Greer has everything she has ever wanted: a life with Cory in Brooklyn, a platform to discuss women’s empowerment, and even adoring fans—her daughter’s teenaged babysitter, Kay Chung, is a whip-smart radical feminist and idolizes Greer entirely. As Greer and Cory return home from the party and put their daughter to bed, Greer reflects quietly on the nature of power, realizing that just as she has replaced her beloved Faith Frank, someone will one day replace Greer herself. Considering the idea that she and her peers are busy engaged in a never-ending struggle for power, agency, and a platform, Greer thinks that Slowy the turtle might one day outlive them all. 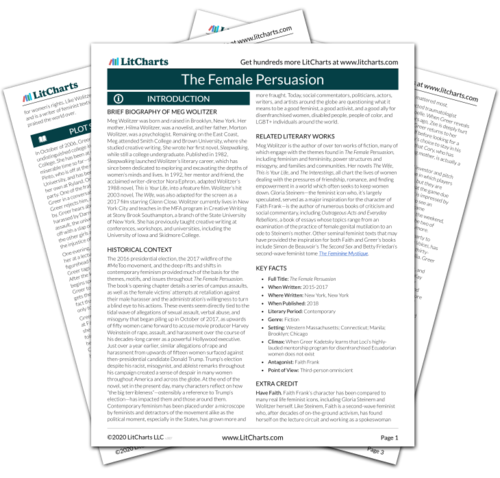 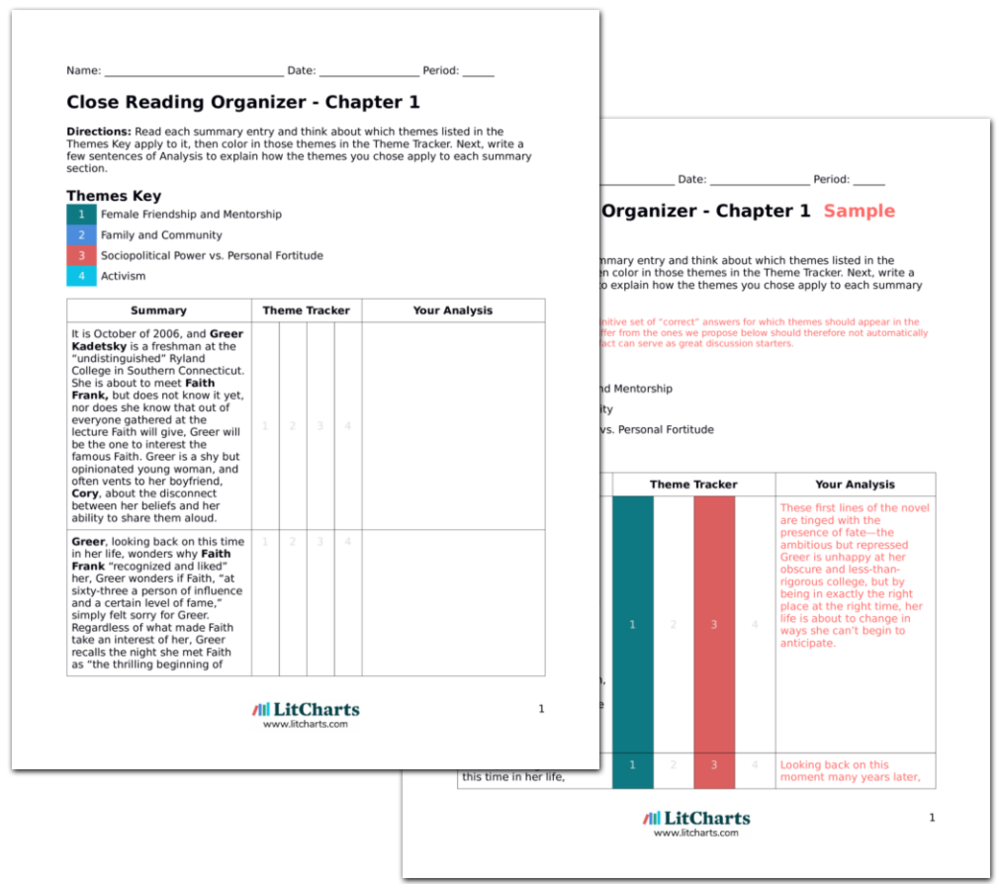