The obelisks in The Fifth Season represent the human tendency to ignore things that they do not understand, and also the way that those in power suppress information that might question the status quo.

The obelisks are mysterious crystalline objects, sometimes miles across in length, that float above the continent of the Stillness. As products of a lost civilization that no one seems to remember, the obelisks are generally seen as pretty but useless—they’re another reminder of past cultures that failed to survive Fifth Seasons and so are “not to be admired.” This idea largely comes from stonelore, which prioritizes survival and following its own prescribed tenets in order to make it through a Fifth Season, and works its way into the general mindset of the Stillness populace. Even Syenite, an orogene, barely notices the obelisks at first.

Over the course of the novel, it’s revealed that some special orogenes can actually use the obelisks to wield incredible power. This is what Alabaster does when he quells the node maintainer’s hot spot from hundreds of miles away, and what Syenite does to destroy the Guardians at Meov. Therefore, the Guardians and whomever they might answer to (whose true identity is still a mystery by the end of The Fifth Season) keep this information about the obelisks secret, letting the mindset of stonelore guide the populace instead. They keep the pit where the obelisks were created completely hidden behind a secret door at the center of the Fulcrum, and when they believe that Alabaster will discover an obelisk and use it (not knowing that he already has done so in the past), the Guardians try to assassinate him. Thus, the Guardians try to suppress information about the obelisks, fearing that orogenes will become too powerful if they learn what they are capable of and become upset that the Guardians control the status quo.

The history of the obelisks’ creation is still a mystery even by the novel’s close, though Alabaster, Essun, and Tonkee have gathered more pieces of the puzzle over the course of the book. The way that the obelisks are perceived by the general population of the Stillness, however, shows that most people will ignore things that don’t directly affect them, no matter how fascinating or inexplicable they may seem. At the same time, ruling classes are usually willing to suppress information and alter history to keep themselves in power.

The Obelisks Quotes in The Fifth Season

The The Fifth Season quotes below all refer to the symbol of The Obelisks. For each quote, you can also see the other characters and themes related to it (each theme is indicated by its own dot and icon, like this one:

). Note: all page numbers and citation info for the quotes below refer to the Orbit edition of The Fifth Season published in 2015.
Prologue Quotes

And then he reaches forth with all the fine control that the world has brainwashed and backstabbed and brutalized out of him, and all the sensitivity that his masters have bred into him through generations of rape and coercion and highly unnatural selection. His fingers spread and twitch as he feels several reverberating points on the map of his awareness: his fellow slaves. […]

So he reaches deep and takes hold of the humming tapping bustling reverberating rippling vastness of the city, and the quieter bedrock beneath it, and the roiling churn of heat and pressure beneath that. Then he reaches wide, taking hold of the great sliding-puzzle piece of earthshell on which the continent sits.

Lastly, he reaches up. For power.

He takes all that, the strata and the magma and the people and the power, in his imaginary hands. Everything. He holds it. He is not alone. The earth is with him.

Then he breaks it. 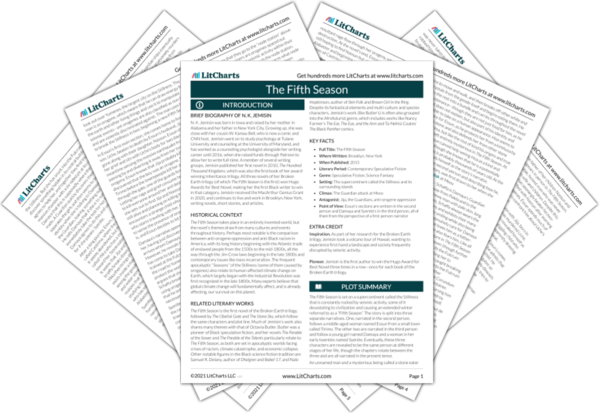 The Obelisks Symbol Timeline in The Fifth Season

The timeline below shows where the symbol The Obelisks appears in The Fifth Season. The colored dots and icons indicate which themes are associated with that appearance.

The narrator then notes another aspect of this world: there are enormous obelisks floating above in the atmosphere, moving very slowly and appearing to be made of crystal.... (full context)

...through empty plains, and Damaya notices ruins of old civilizations as they pass, and an obelisk floating overhead. She thinks about how, even though some comms have survived Fifth Seasons, Sanze... (full context)

...time and then gets into the sleeping bag as well. As she drifts off, an obelisk floats by in the distance. The chapter ends with a proverb saying that after Winter,... (full context)

...paranoid, Syen stays awake the whole night. The next morning, she notices that an amethyst obelisk is floating in the sky outside—and its much closer than it was the day before. (full context)

...the last of the earth and coral that had covered it in the seabed—it’s an obelisk. This one is different from the amethyst of the night before: it’s garnet-colored, around a... (full context)

As Syenite continues to study the massive obelisk, which hovers above the harbor and begins to rotate, she sees a figure caught among... (full context)

...paces around the room—a smaller one than before, as a week has passed since the obelisk appeared and Allia is no longer funding their stay—frustratedly wondering aloud what the telegram means.... (full context)

...geomests and every other kind of scholar have been coming to Allia ever since the obelisk appeared, and many have already interviewed Syenite. The politics of the Fulcrum don’t make sense... (full context)

The obelisk is still hovering over the harbor, and both Alabaster and Syenite can sense it emitting... (full context)

...in their room. The Fulcrum is keeping them in Allia because Syenite raised the broken obelisk, and they are surely concerned about controlling the orogene who can control the obelisk. Syenite... (full context)

...Syenite notices Alabaster tensing up beside her. Edki scornfully comments on Alabaster’s work with the obelisk. Angry that she’s being condescended to even now—as people assume Alabaster must have done everything—Syen... (full context)

...because what they do is fundamentally immoral. Then her attention turns to the nearby garnet obelisk. With Edki’s knife still traveling toward her heart, Syenite sees Alabaster silently warn her against... (full context)

This time Syenite feels like she is not in control of the obelisk at all, and as she passes through its broken parts, she herself feels shattered and... (full context)

...finds the existence of stone eaters unnerving, something that defies reason like orogeny or the obelisks. She then tells Alabaster about the stone eater in the obelisk and says that she... (full context)

...best guesses. He thinks that a mysterious “someone”—likely a faction within the Guardians—knew about the obelisk in Allia’s harbor, and suspected that a ten-ringer like Alabaster would be able to find... (full context)

Thinking again about how Alabaster used the obelisk to remove the poison from his body at the inn, Syenite asks him if anyone... (full context)

...before, oddly, and so can appreciate just how terrible things are in Allia. The broken obelisk has seemingly buried itself all the way down into the earth’s mantle, leaving a gaping... (full context)

...people who can “make it matter.” Tonkee then declares that the socket is where the obelisks were built, and also where “everything went wrong.” (full context)

...use-caste, thus disowning her without a scandal. Tonkee has since spent her life studying the obelisks. (full context)

...had her followed because she thought that Essun might be someone who could control the obelisks. Essun bitterly points out that she went so far as to die to escape the... (full context)

Essun says that there should have been only one obelisk headed toward Tirimo, the amethyst, but Tonkee insists that there was another one, and it... (full context)

...of the ships can leave. This is obviously Alabaster’s doing, and Syen sees an amethyst obelisk approaching in the distance, which he must be using to wield all this power. Innon... (full context)

...the water itself. At last, they see Alabaster high on the clifftop, using both the obelisk’s power and the life within the icy torus surrounding him. Syenite worries about him, remembering... (full context)

...to find her own way around this problem. She’s still too cautious to use the obelisk without Alabaster’s help, but she can draw strength from the rock of Meov itself. (full context)

...them all to die than to live as slaves, she reaches up to the amethyst obelisk, which is still hovering above as if waiting for this moment to arrive. In a... (full context)

...coast of the Stillness dies, but that some of its inhabitants will survive. The amethyst obelisk sends out a pulse of power and massive spines of rock surge up from the... (full context)

...finds this woman, for many of his kind are drawn to the pulse from the obelisk and the person who caused it. He was the first to find her, and he... (full context)

...couldn’t even if he wanted to. Then he asks her if she can use the obelisks now; he knows she did it at Allia and Meov, but he wonders if she... (full context) 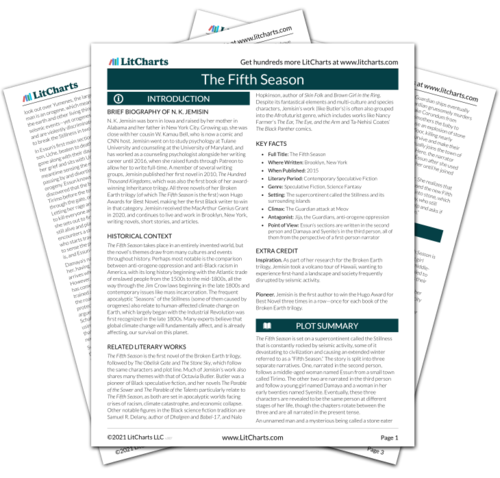 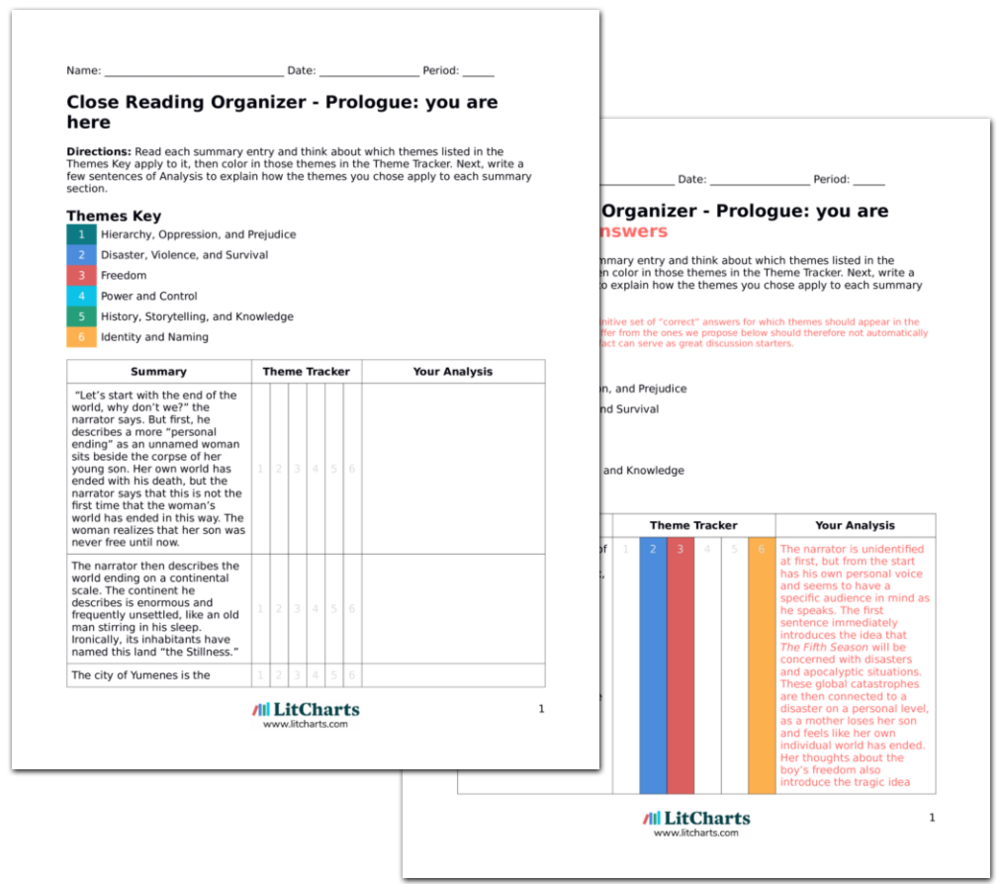