Download this LitChart! (PDF)
Teachers and parents! Struggling with distance learning? Our Teacher Edition on The Four Agreements can help.

Welcome to the LitCharts study guide on Don Miguel Ruiz's The Four Agreements. Created by the original team behind SparkNotes, LitCharts are the world's best literature guides.

A concise biography of Don Miguel Ruiz plus historical and literary context for The Four Agreements.

A quick-reference summary: The Four Agreements on a single page.

In-depth summary and analysis of every chapter of The Four Agreements. Visual theme-tracking, too.

Explanations, analysis, and visualizations of The Four Agreements's themes.

Description, analysis, and timelines for The Four Agreements's characters.

Description, analysis, and timelines for The Four Agreements's terms.

Explanations of The Four Agreements's symbols, and tracking of where they appear.

An interactive data visualization of The Four Agreements's plot and themes.

Don Miguel Ruiz is the youngest of 13 children born to his father José Ruiz and his mother Sarita Vasquez, whom he describes as healers of the Toltec tradition. Ruiz originally trained as a doctor but changed his life’s path after being in a near-fatal car crash in the 1970s. He began to study indigenous Mexican tradition, based on the oral history passed down to his mother from previous generations of his family, which Ruiz refers to as “Toltec.” Ruiz published The Four Agreements in 1997, and it was the first of Ruiz’s 10 books (some co-written with his son Jose Ruiz) that frame indigenous Mexican shamanistic beliefs in practical terms pertaining to contemporary life, with the aim of providing spiritual enlightenment to the reader. Ruiz’s works are highly respected by writers and thinkers in the “New Thought” movement, which centers on philosophies of personal empowerment based on the cultivation of an optimistic worldview.
Get the entire The Four Agreements LitChart as a printable PDF.
"My students can't get enough of your charts and their results have gone through the roof." -Graham S.
Download it! 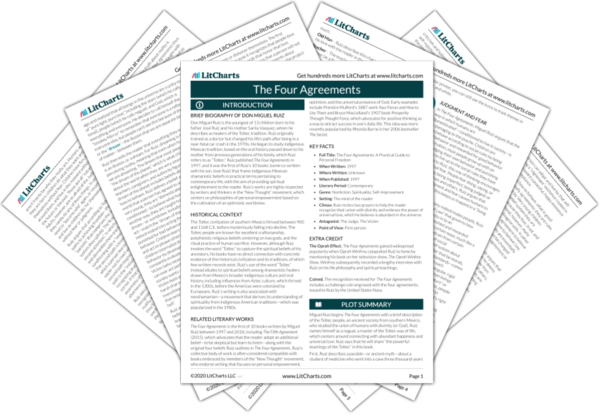 Historical Context of The Four Agreements

The Toltec civilization of southern Mexico thrived between 900 and 1168 C.E. before mysteriously falling into decline. The Toltec people are known for excellent craftsmanship, polytheistic religious beliefs centering on two gods, and the ritual practice of human sacrifice. However, although Ruiz invokes the word “Toltec” to capture the spiritual beliefs of his ancestors, his books have no direct connection with concrete evidence of this historical civilization and its traditions, of which few written records exist. Ruiz’s use of the word “Toltec” instead alludes to spiritual beliefs among shamanistic healers drawn from Mexico’s broader indigenous culture and oral history, including influences from Aztec culture, which thrived in the 1300s, before the Americas were colonized by Europeans. Ruiz’s writing is also associated with neoshamanism—a movement that derives its understanding of spirituality from indigenous American traditions—which was popularized in the 1980s.

Other Books Related to The Four Agreements

The Four Agreements is the first of 10 books written by Miguel Ruiz between 1997 and 2018, including The Fifth Agreement (2015), which advocates that the reader adopt an additional belief—to be skeptical but learn to listen—along with the original four beliefs Ruiz outlines in The Four Agreements. Ruiz’s collective body of work is often considered compatible with books embraced by members of the “New Thought” movement, who endorse writing that focuses on personal empowerment, optimism, and the universal presence of God. Early examples include Prentice Mulford’s 1887 work Your Forces and How to Use Them and Bruce MacLelland’s 1907 book Prosperity Through Thought Force, which advocates for positive thinking as a way to attract success in one’s daily life. This idea was more recently popularized by Rhonda Byrne in her 2006 bestseller The Secret.
Key Facts about The Four Agreements

Extra Credit for The Four Agreements

The Oprah Effect. The Four Agreements gained widespread popularity when Oprah Winfrey catapulted Ruiz to fame by mentioning his book on her television show, The Oprah Winfrey Show. Winfrey subsequently recorded a lengthy interview with Ruiz on his life philosophy and spiritual teachings.

Coined. The recognition received for The Four Agreements includes a challenge coin engraved with the four agreements, issued to Ruiz by the United States Navy. 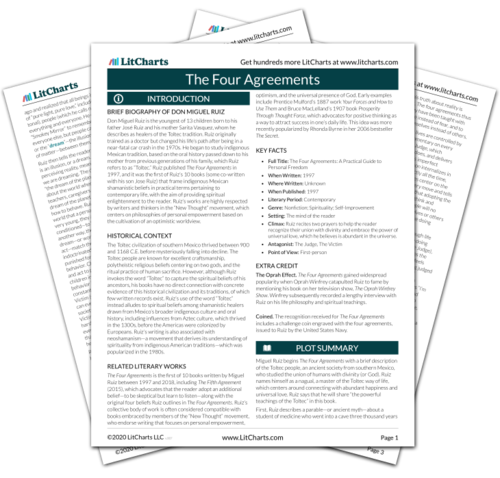 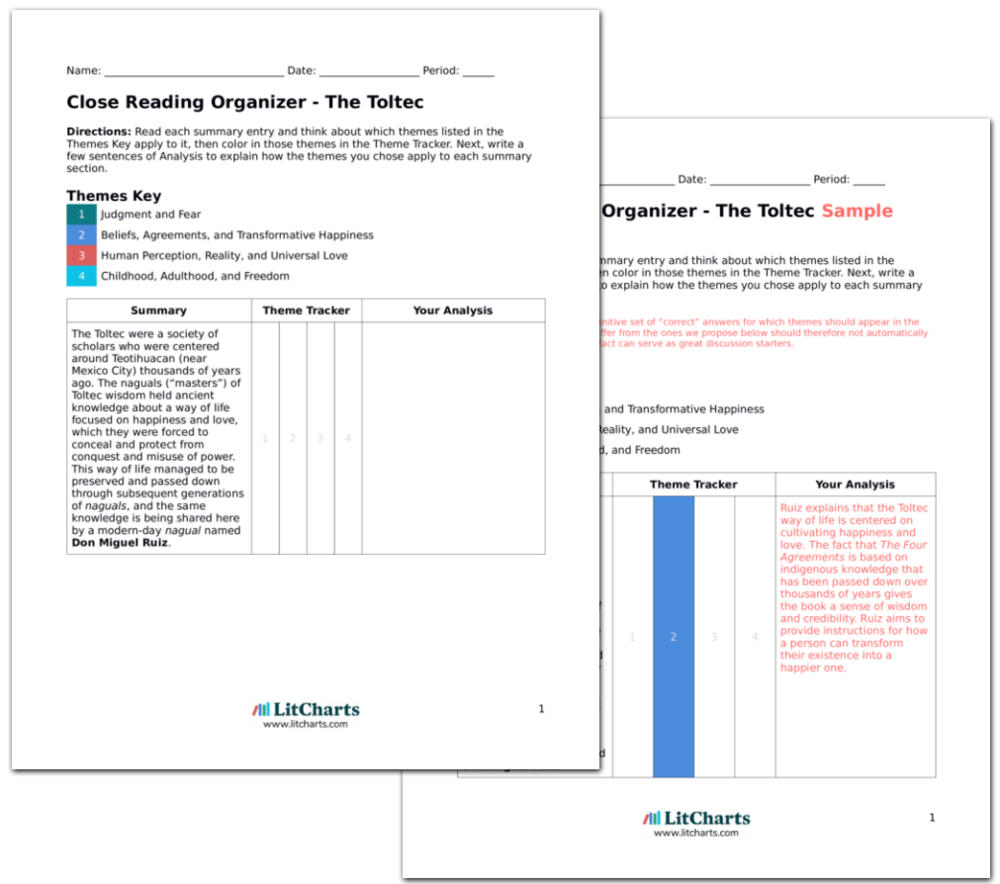