The Fun They Had
Introduction + Context
Plot Summary
Detailed Summary & Analysis
The Fun They Had
Themes
All Themes Technological Progress and Education Books and Preservation of the Past Gratitude and Wanting
Quotes
Characters
All Characters Margie Tommy County Inspector Margie’s Mother / Mrs. Jones
Terms
All Terms Punch Card
Symbols
All Symbols Tommy’s Book

Download this LitChart! (PDF)
Teachers and parents! Struggling with distance learning? Our Teacher Edition on The Fun They Had can help.

Welcome to the LitCharts study guide on Isaac Asimov's The Fun They Had. Created by the original team behind SparkNotes, LitCharts are the world's best literature guides.

The Fun They Had: Introduction

A concise biography of Isaac Asimov plus historical and literary context for The Fun They Had.

The Fun They Had: Plot Summary

A quick-reference summary: The Fun They Had on a single page.

The Fun They Had: Detailed Summary & Analysis

In-depth summary and analysis of every of The Fun They Had. Visual theme-tracking, too.

The Fun They Had: Themes

Explanations, analysis, and visualizations of The Fun They Had's themes.

The Fun They Had: Quotes

The Fun They Had's important quotes, sortable by theme, character, or .

The Fun They Had: Characters

Description, analysis, and timelines for The Fun They Had's characters.

Description, analysis, and timelines for The Fun They Had's terms.

The Fun They Had: Symbols

Explanations of The Fun They Had's symbols, and tracking of where they appear.

The Fun They Had: Theme Wheel

An interactive data visualization of The Fun They Had's plot and themes.

Isaac Asimov was born in Petrovichi in the Russian Soviet Federative Socialist Republic (now Smolensk Oblast, Russia) to an Orthodox Jewish family. In 1923, when he was three years old, Asimov’s family immigrated to Brooklyn, New York, where his parents owned a candy store. The candy store also sold newspapers, magazines, and pulp literature, inspiring the young Asimov’s love for the written word and providing him with a constant amount of reading material that he would not have otherwise been able to afford. He attended Seth Low Junior College and University Extension, branches of Columbia University, to receive his bachelor’s in Chemistry. Asimov finished his schooling at Columbia with a Ph.D. in Chemistry in 1948. After completing his education and serving in the U.S. Army as a civilian chemist in Philadelphia, Asimov became a professor of biochemistry at Boston University School of Medicine. In addition to his academic career, Asimov was a prolific author of science fiction, popular science, mysteries, history books, and nonfiction. He is best known for his science fiction, which he began writing at the age of 11. Asimov’s most successful output of science fiction dates between 1941-1953, during which he published his famous novelette, “Nightfall,” that was voted the best science fiction story of all time in 1964; his Foundation trilogy, which won the Hugo Award for Best All Time Series in 1966; his Galactic Empire series, dealing with an interstellar empire; and his robot stories collected in I, Robot. Along with Robert A. Heinlein and Arthur C. Clark, Asimov is considered to be one of the “Big Three” writers of the Golden Age of science fiction and has had a lasting influence as not only on the genre of science fiction and its future writers, but also as one of the most distinguished interdisciplinary thinkers of the twentieth century.
Get the entire The Fun They Had LitChart as a printable PDF.
"My students can't get enough of your charts and their results have gone through the roof." -Graham S.
Download 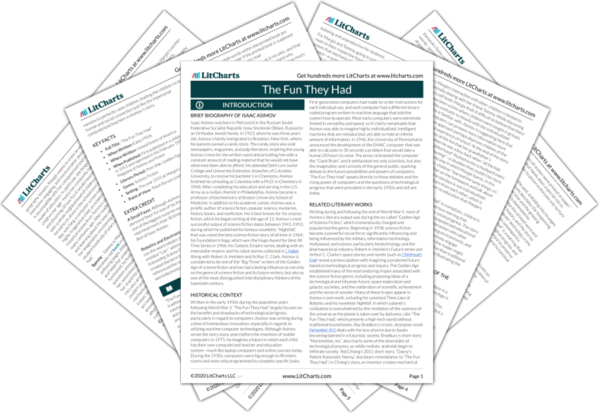 Historical Context of The Fun They Had

Written in the early 1950s during the peacetime years following World War II, “The Fun They Had” largely focuses on the benefits and drawbacks of technological progress, particularly in regard to computers. Asimov was writing during a time of tremendous innovation, especially in regards to utilizing wartime computer technologies. Although Asimov wrote the story many years before the invention of mobile computers in 1975, he imagines a future in which each child has their own computerized teacher and education system—much like laptop computers and online courses today. During the 1950s, computers were big enough to fill entire rooms and were only programmed to complete specific tasks. First-generation computers had made-to-order instructions for each individual use, and each computer had a different binary-coded program written in machine language that told the system how to operate. Most early computers were extremely limited in versatility and speed, so it’s fairly remarkable that Asimov was able to imagine highly individualized, intelligent machines that are miniaturized, yet able to hold an infinite amount of information. In 1946, the University of Pennsylvania announced the development of the ENIAC computer that was able to calculate in 30 seconds a problem that would take a human 20 hours to solve. The press nicknamed the computer the “Giant Brain,” and it exhilarated not only scientists, but also the imagination and curiosity of the general public, sparking debate to the future possibilities and powers of computers. “The Fun They Had” speaks directly to these debates and the rising power of computers and the questions of technological progress that were prevalent in the early 1950s and still are today.

Other Books Related to The Fun They Had

Writing during and following the end of World War II, most of Asimov’s literary output was during the so-called “Golden Age of Science Fiction,” which tremendously changed and popularized the genre. Beginning in 1938, science fiction became a powerful social force, significantly influencing and being influenced by the military, information technology, Hollywood, and science, particularly biotechnology and the pharmaceutical industry. Robert A. Heinlein’s Future series and Arthur C. Clarke’s space stories and novels (such as Childhood’s End) reveal a preoccupation with imagining a projected future based on technological progress and inquiry. The Golden Age established many of the most enduring tropes associated with the science fiction genre, including proposing ideas of a technological and inhuman future, space exploration and galactic societies, and the celebration of scientific achievement and the sense of wonder. Many of these tropes appear in Asimov’s own work, including his canonical Three Laws of Robotics and his novelette Nightfall, in which a planet’s civilization is overwhelmed by the revelation of the vastness of the universe as the planet is taken over by darkness. Like “The Fun They Had,” which presents a high-tech world without traditional bound books, Ray Bradbury’s iconic, dystopian novel Fahrenheit 451 deals with the loss of print due to books becoming banned in a futuristic society. Bradbury’s short story “Marionettes, Inc.” also charts some of the downsides of technological process, as wildly realistic androids begin to infiltrate society. Ted Chiang’s 2011 short story, “Dacey’s Patent Automatic Nanny,” also bears resemblance to “The Fun They Had”; in Chiang’s story, an inventor creates mechanical nannies to perfectly raise children, leading the children to lack human and social connection just like the impersonal computerized teachers in Asimov’s story.
Key Facts about The Fun They Had

Extra Credit for The Fun They Had

A Small Favor. Although Asimov wrote “The Fun They Had” as a personal favor for one of his friends, the short story became one of the biggest surprise successes of his career and was reprinted more than 30 times, including its publication in The Best of Isaac Asimov.

Robotics and Electronics. Asimov is the first person to coin and use the word robotics in print in his science fiction short story entitled “Liar!” which was published in the May 1941 issue of Astounding Science Fiction. Asimov was not aware that he created the term because he already assumed that the word referenced the science and technology of robots, similar to the word electronics. 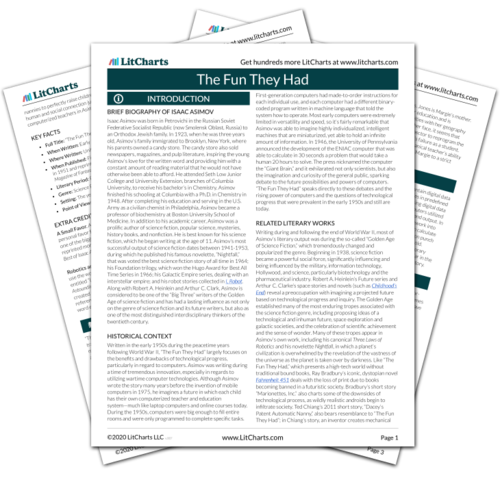 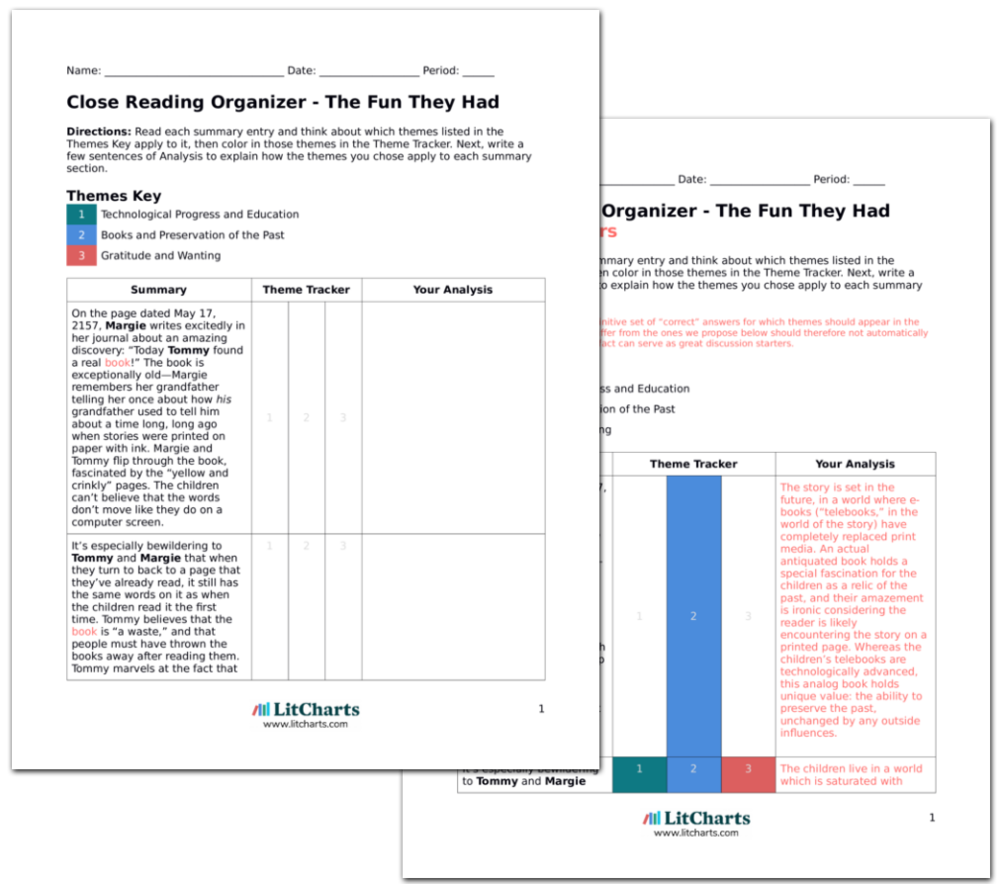