The titular gardener functions as a symbol of Christ, as well as the Christian message of redemption. Helen Turrell meets the gardener in a war cemetery, where she has come to visit the grave of her son, Michael, who has died in World War I. As the story explains, Michael is really Helen’s illegitimate son, but she raised him as her “nephew” for the sake of propriety. Helen meets this man, who she assumes to be the gardener, in the cemetery while she is lost among the graves. His compassion and instant understanding of her secret (even though she carefully and specifically introduces herself to him as Michael’s aunt) symbolize Christ’s forgiveness as part of the Christian message. This man tells Helen that he will “show her where her son lies,” swiftly unearthing her secret and freeing her of the burden of having to pretend to be the boy’s aunt. The gardener’s words also symbolize eternal life after death and the reunion of separated loved ones through the promise of Heaven.

The fact that the man is described as a gardener is also symbolic of Mary Magdalene’s meeting with Christ in the biblical story of Christ’s Resurrection in the Book of John. While looking for Christ’s body outside the tomb in which he has been buried, Mary Magdalene meets a man whom she thinks is the gardener, but is really the resurrected Jesus. She asks the man to help her find Christ’s body, just as Helen asks the gardener in the cemetery to help her find Michael’s grave. The idea of the man being a gardener in Kipling’s story is also symbolic of Christ caring for human souls just as the gardener in the story is tending to the “young plants” in the graveyard. Christ’s compassion towards Helen, despite his knowledge of her secret, demonstrates the potential for forgiveness in the Christian message and the image of the “young plants” suggest rejuvenation, or new life after death, after World War I.

The The Gardener quotes below all refer to the symbol of The Gardener. For each quote, you can also see the other characters and themes related to it (each theme is indicated by its own dot and icon, like this one:

). Note: all page numbers and citation info for the quotes below refer to the Borzoi edition of The Gardener published in 1994.
The Gardener Quotes

Unlock with LitCharts A+
Get the entire The Gardener LitChart as a printable PDF.
"My students can't get enough of your charts and their results have gone through the roof." -Graham S.
Download 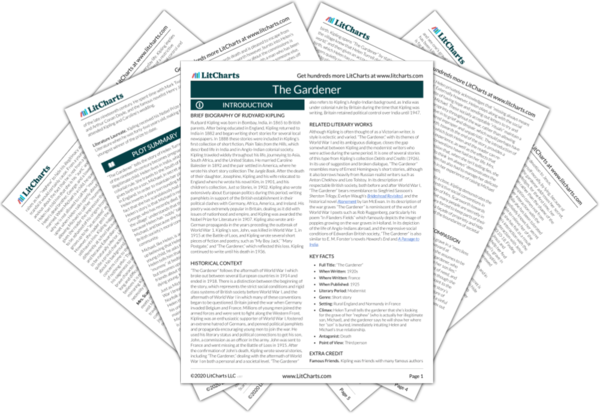 The timeline below shows where the symbol The Gardener appears in The Gardener. The colored dots and icons indicate which themes are associated with that appearance.

...the cemetery, Helen sees a man kneeling among the graves and, assuming him to be the gardener , she hurries over and asks him for help to find her “nephew’s” grave. The... (full context)