Get LitCharts A+
LitCharts assigns a color and icon to each theme in The Girl on the Train, which you can use to track the themes throughout the work.

Throughout The Girl on the Train, the novel’s protagonist and primary narrator, Rachel Watson, endures a painful and life-threatening battle with alcoholism. But Rachel isn’t the only character in the novel who struggles with addiction; Hawkins examines how Rachel, Megan, and Anna—all survivors of Tom Watson’s cruelty and abuse—develop patterns of addiction and dependency to cope with or attempt to escape that abuse. Ultimately, by interweaving stories of three women struggling under the weight of different kinds of emotional and physiological dependencies, Hawkins suggests that many women fall into harmful, isolating patterns of addiction and dependency as a response to emotional, psychological, and physical abuse.

Rachel falls into a dangerous pattern of alcohol addiction and dependency as a way of escaping or numbing the pain of her abusive relationship with Tom. While still married to Tom, prior to the events of the novel’s main plot, Rachel turned to alcohol to numb the pain of being unable to conceive a child—and to escape the cruelty, vitriol, and shaming which Tom showed her as a result of her infertility. Alcohol became a way for Rachel to pass the time during her unhappy marriage to Tom; she felt she couldn’t leave him, but as her alcoholism worsened, Tom began using her addiction as an excuse to leave her for another woman, Anna. Hawkins directly connects Rachel’s alcohol abuse to the way Tom mistreated, disparaged, and abused her. Rachel’s deepening descent into alcoholism at the start of the novel is a way of coping with the losses she’s faced in recent years: drinking distracts her from the loss of her dreams of being a mother, the loss of her marriage, and the loss of the life she imagined living. Her alcoholism is also an unfortunate consequence of her brushes with violence and profound mistreatment at the hands of the person who was supposed to love and care for her the most.

Though Rachel’s alcoholism is the most obvious addiction within the novel, Hawkins also shows how Megan and Anna’s peculiar dependencies, though non-chemical in nature, come to define their lives in the wake of prolonged exposure to abuse. When Megan embarks on an affair with Tom, she is initially trying to escape memories of abuse and mistreatment at the hands of a past lover, Craig “Mac” McKenzie. Mac began having sex with Megan when she was a 16-year-old runaway. He fathered Libby, the child whom Megan brought into the world at just 19—yet he ignored and abandoned her in her moment of need, when Libby died in infancy. As a result of this trauma, Megan has come to depend upon constant, steady male attention. Megan’s feelings of restlessness and her desire for risky sexual relationships demonstrate her dependency on positive male attention to make up for the trauma she suffered in the wake of her relationship with Mac. Megan seeks out an ever-present yet ever-shifting combination of intimacy, risk, and attention in order to stave off the pain of all she has been through. As a result, Megan engages in tumultuous sexual relationships not just with her husband, Scott, but with her therapist Kamal Abdic and with Tom Watson.

Anna, Tom’s new wife, engages in patterns of addiction and dependency throughout the novel as well—and, like Megan, her dependency is not on a substance or an object, but on a person. As her marriage with Tom begins to deteriorate, Anna clings to her infant daughter, Evie, for comfort. Anna slowly becomes more and more dependent upon closeness to and inseparability from her child as her suspicions about Tom—which she isn’t yet willing to admit to herself consciously—deepen. She believes that because she and Tom married after a prolonged affair during his relationship with Rachel, the other women in her London suburb judge her and don’t want to associate with her. This, Hawkins suggests, isolates Anna even further, making her more and more vulnerable to Tom’s continued abuse. Anna’s emotional dependence on her own child manifests as clinginess and a constant fear that someone will take her child away from her. Anna attempts escape her unspoken fears of being physically abused or emotionally abandoned by her husband through an intense focus on childrearing.

Throughout the novel, Hawkins demonstrates how Rachel, Megan, and Anna develop addictions, crutches, and cravings as the result of their experiences with debilitating abuse on multiple levels. Their stories are, Hawkins suggests, cautionary tales of how women’s issues are sidelined in mainstream society—and of how because of this, women are often forced to turn to dependencies which further endanger them. 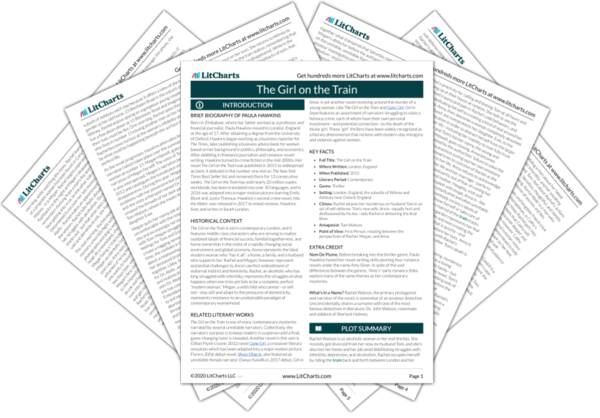 Addiction, Dependency, and Abuse Quotes in The Girl on the Train

Below you will find the important quotes in The Girl on the Train related to the theme of Addiction, Dependency, and Abuse.
Rachel: One Quotes

I have lost control over everything, even the places in my head.

Something happened, I know it did. I can't picture it, but I can feel it. The inside of my mouth hurts, as though I've bitten my cheek, there's a metallic tang of blood on my tongue. I feel nauseated, dizzy. I run my hands through my hair, over my scalp. I flinch. There's a lump, painful and tender, on the right side of my head. My hair is matted with blood.

Maybe it was then. Maybe that was the moment when things started to go wrong, the moment when I imagined us no longer a couple, but a family; and after that, once I had that picture in my head, just the two of us could never be enough. Was it then that Tom started to look at me differently, his disappointment mirroring my own? After all he gave up for me, for the two of us to be together, I let him think that he wasn't enough.

On the train on the way home, as I dissect all the ways that today went wrong, I'm surprised by the fact that I don't feel as awful as I might. Thinking about it, I know why that is: I didn't have a drink last night, and I have no desire to have one now. I am interested, for the first time in ages, in something other than my own misery. I have purpose. Or at least, I have a distraction.

Unlock with LitCharts A+
Anna: One Quotes

When I wake again, Tom's not at my side, but I can hear his footfalls on the stairs. He's singing, low and tuneless, "Happy birthday to you, happy birthday to you. . ." I hadn't even thought about it earlier, I'd completely forgotten; I didn't think of anything but fetching my little girl and getting back to bed.

"Honestly, Rachel, I don't understand how you could have kept this up for so long."

It's different, the nightmare I wake from this morning. In it, I've done something wrong, but I don't know what it is, all I know is that it cannot be put right. All I know is that Tom hates me now, he won't talk to me any longer, and he has told everyone I know about the terrible thing I've done, and everyone has turned against me: old colleagues, my friends, even my mother. They look at me with disgust, contempt, and no one will listen to me, no one will let me tell them how sorry I am. I feel awful, desperately guilty, I just can't think what it is that I've done.

“Every time I passed that hole in the wall I thought about it. Tom said he was going to patch it up, but he didn't, and I didn't want to pester him about it. One day I was standing there […] and I […] remembered. I was on the floor, my back to the wall, sobbing and sobbing, Tom standing over me, begging me to calm down, the golf club on the carpet next to my feet, and I felt it, I felt it. I was terrified. The memory doesn't fit with the reality, because I don't remember anger, raging fury. I remember fear."

I'm doing the things she did: drinking alone and snooping on him. The things she did and he hated. But recently—as recently as this morning—things have shifted. If he's going to lie, then I'm going to check up on him. That's a fair deal, isn't it?

Tom's lips are moving, he's saying something to me, but I can't hear him. I watch him come, I watch him, and I don't move until he's almost upon me, and then I swing. I jam the vicious twist of the corkscrew into his neck.

His eyes widen as he falls without a sound. He raises his hands to his throat, his eyes on mine. He looks as though he's crying. I watch until I can't look any longer, then I turn my back on him. As the train goes past I can see faces in brightly lit windows, heads bent over books and phones, travellers warm and safe on their way home. 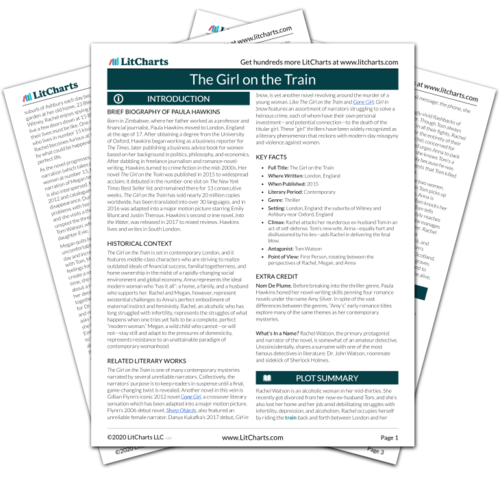 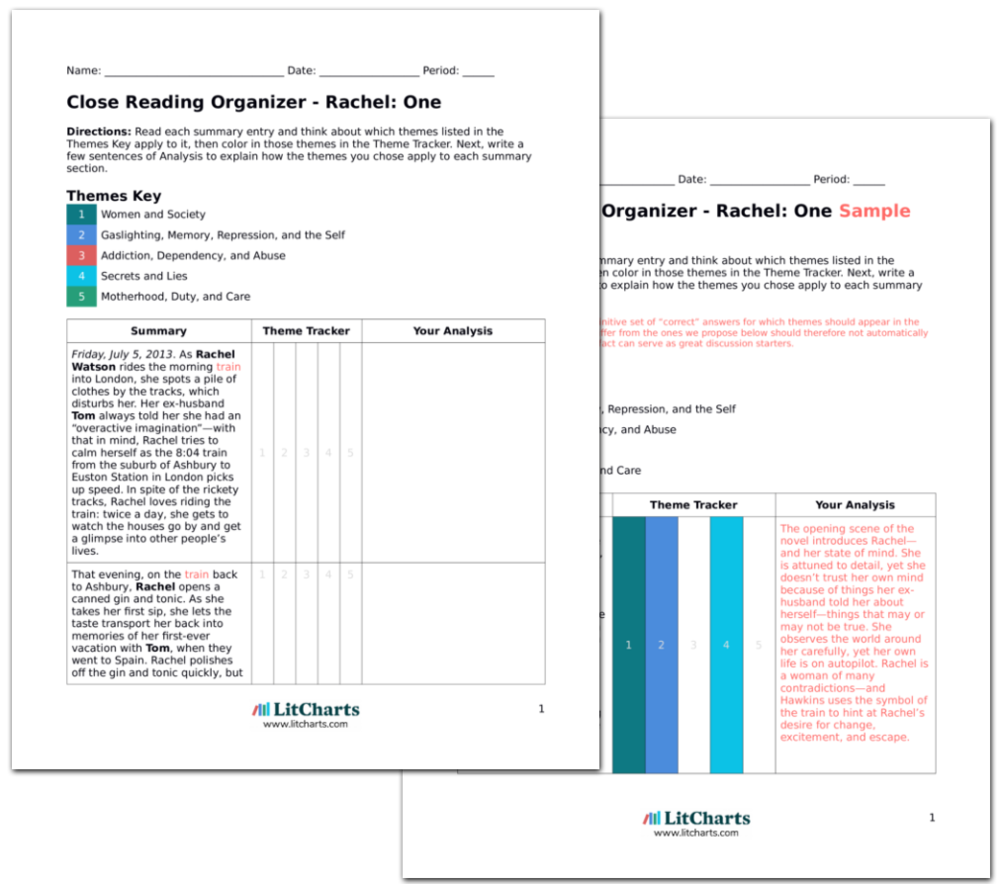