Download this LitChart! (PDF)
Teachers and parents! Struggling with distance learning? Our Teacher Edition on The Giver can help.

Sometime in the future, an 11-year-old boy named Jonas lives in a seemingly perfect community in which there is little pain and little crime. People are polite. Everyone belongs to a supportive family. But this harmony comes at a price. There is also no choice, and real emotions are nonexistent. Life is dictated by strict rules. A committee of elders matches spouses and assigns them children born from women whose only job is to give birth. The committee names all babies and chooses every person's career. Sex and love are prohibited, being different is shameful, and families are dissolved when the children are grown. Everyone looks similar in skin color and dress. Everything serves a purely practical purpose—to serve the common good of the community and minimize conflict. The old and the sick are "released," which the community believes means sent to live "Elsewhere," outside the community.

During family time, Jonas shares his uneasiness about the upcoming ceremony, where he will be assigned his job. Jonas's father, a Nurturer who cares for newborns, shares his concern over a baby to be named Gabriel who is not growing fast enough. When Jonas's father brings the baby home, Jonas notices that Gabriel has pale eyes like him, an unusual trait.

The next day Jonas does required volunteer hours with his friends Asher and Fiona at the House of the Old. A woman named Larissa tells him an old man was recently released in a beautiful ceremony. Jonas asks what happens when someone is released, but no one knows. That night, Jonas has a dream about bathing naked with Fiona. When he tells his parents, his mother says they are natural feelings called Stirrings, and that Jonas must take a pill to stifle them.

A few weeks later, at the annual ceremony, Jonas's friends are assigned jobs that seem to fit them perfectly. But the Chief Elder skips Jonas's name. After everyone else has been assigned, the Elder announces that Jonas has been selected for the great honor of being the next Receiver. She says Jonas has the Capacity to See Beyond, which explains the strange changes happening to his vision.

The next day Jonas meets the current Receiver, who is now an old man. He tells Jonas his job is to transmit the memories he holds, which are all the memories in the world, to Jonas. He tells Jonas to call him The Giver. He then lays his hands on Jonas's back and gives him the memory of sledding in the snow. Jonas realizes there are hundreds of wonderful memories no one in the community has ever experienced.

Over the next year, from The Giver's memories, Jonas learns about color, nature, beauty, pleasure, love, and family. (For Jonas, the Capacity to See Beyond means that he can see in color, while everyone else sees in black and white). Jonas is also given painful memories of loss, loneliness, poverty, injury, war, and death. The Giver explains that the community is founded on the principle of Sameness, which requires the stability of a world without deep emotion or memory. But he adds that the memories give the Receiver the true wisdom needed to guide the committee on their decisions.

Meanwhile, in his efforts to help Gabriel avoid being released, Jonas also secretly learns that he has the power to transmit memories to Gabriel. While asking questions about release, Jonas learns from The Giver that ten years earlier, his previous trainee (later revealed to be his daughter) couldn't bear the pain of being The Receiver and asked for release. All her memories were traumatically released to the community. Later, at Jonas's request, The Giver shows Jonas a release ceremony Jonas's father is performing on an identical twin baby. Jonas realizes with horror that to be "released" means to be killed. He convinces The Giver to create a plan in which Jonas will escape from the community and release all his memories to the community members, to stop them from living such numb and ignorant lives. The Giver will stay behind to help the people cope with their new memories.

When Jonas learns that Gabriel is to be released the next day, he rushes forward with the plan: he takes Gabriel, crosses the river, and flees the community by bicycle. On the road he encounters beautiful things from his memories like rain and birds, but he also encounters hunger and cold. As he is growing weak, and despairs about being able to protect Gabriel, he sees a snow-covered hill from his first memory from The Giver. At the top of the hill, they find a sled and sled down, where they hear music at the bottom of the hill and see colored lights in the windows of houses in the distance. 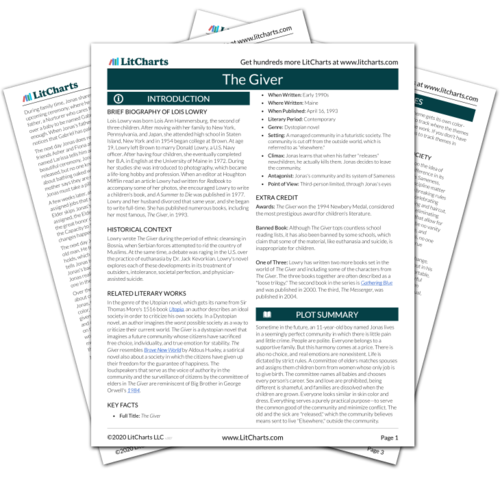 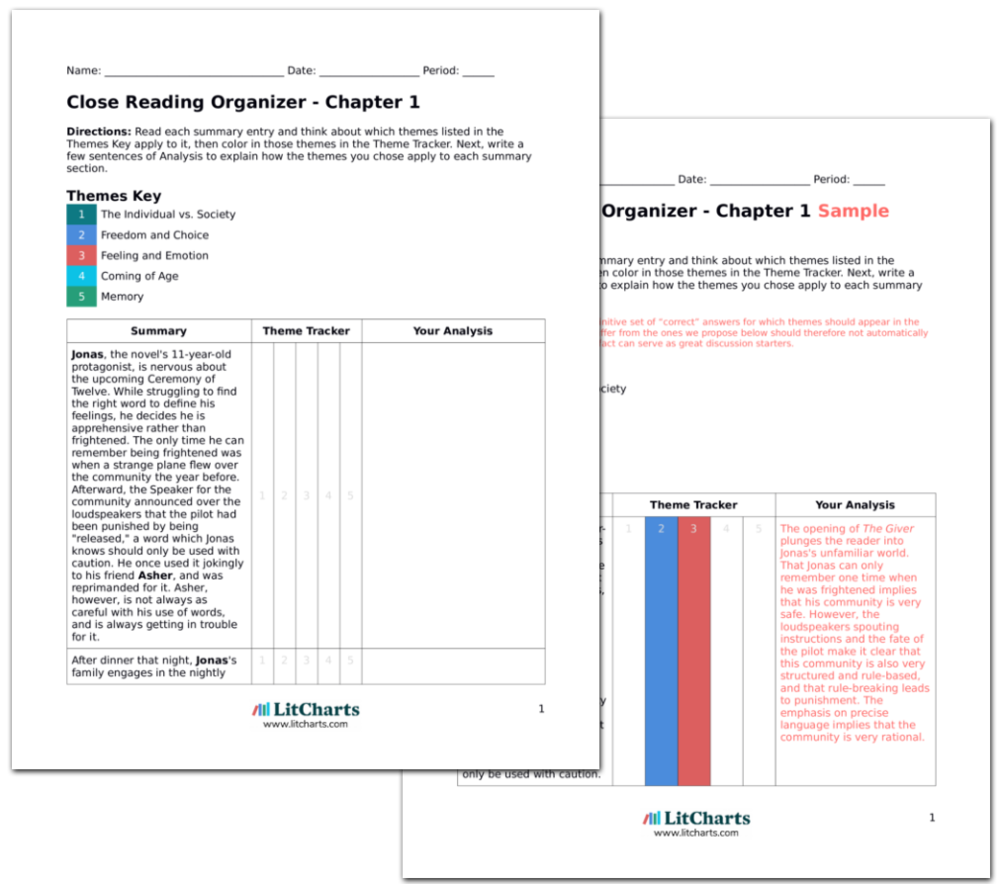