Love comes in many forms in The God of Small Things, but it is most important when it crosses divides of society and duty. The relationship between Estha and Rahel is the strongest of the book, as the two are so close as to almost consider themselves one person. Yet when the young Rahel lists the people she loves she does not include Estha, but instead those she is “supposed” to love according to familial duty. Roy emphasizes the “Love Laws” early and often, foreshadowing the importance she will give to love that crosses boundaries of society and tradition. The central example of this is Ammu’s relationship with Velutha, an Untouchable. This relationship is horrifying to the community and leads to Velutha’s death and Ammu’s exile, but it is also the most positive example of romantic love in the novel.

Unfortunately, love and sexuality often take on more violent and oppressive forms, as Mammachi is beaten by her husband and Estha is molested by the Orangedrink Lemondrink Man. Roy ends the novel with Estha and Rahel’s incestuous union after they are reunited, followed by Ammu’s first sexual encounter with Velutha. The poetic descriptions and juxtaposition of these scenes against violence and death gives them greater impact, and through them Roy shows that love can cross divides of politics and hatred. Even though such love can lead to tragedy, it is still incredibly valuable. 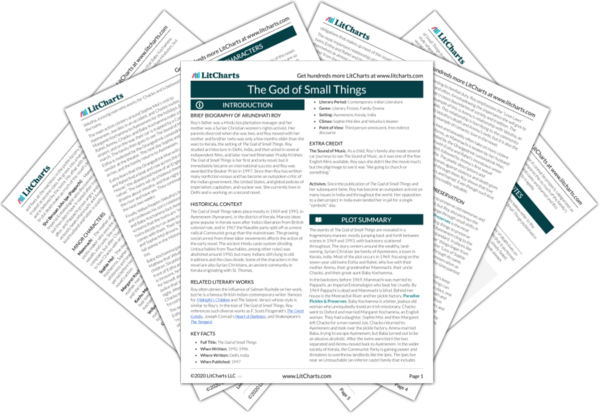 Love and Sexuality Quotes in The God of Small Things

Below you will find the important quotes in The God of Small Things related to the theme of Love and Sexuality.
Chapter 1 Quotes

“Stop posing as the children’s Great Savior!” Ammu said. “When it comes down to brass tacks, you don’t give a damn about them. Or me.”
“Should I?” Chacko said. “Are they my responsibility?”
He said that Ammu and Estha and Rahel were millstones around his neck.

She was aware of his libertine relationships with the women in the factory, but had ceased to be hurt by them. When Baby Kochamma brought up the subject, Mammachi became tense and tight-lipped.
“He can’t help having a Man’s Needs,” she said primly.
Surprisingly, Baby Kochamma accepted this explanation, and the enigmatic, secretly thrilling notion of Men’s Needs gained implicit sanction in the Ayemenem House. Neither Mammachi nor Baby Kochamma saw any contradiction between Chacko’s Marxist mind and feudal libido.

As the door was slowly battered down, to control the trembling of her hands, Ammu would hem the ends of Rahel’s ribbons that didn’t need hemming.
“Promise me you’ll always love each other,” she’d say, as she drew her children to her.
“Promise,” Estha and Rahel would say. Not finding words with which to tell her that for them there was no Each, no Other.

Vellya Paapen began to cry. Half of him wept. Tears welled up in his real eye and shone on his black cheek. With his other eye he stared stonily ahead. An old Paravan, who had seen the Walking Backwards days, torn between Loyalty and Love.
Then the Terror took hold of him and shook the words out of him. He told Mammachi what he had seen. The story of the little boat that crossed the river night after night, and who was in it. The story of a man and woman, standing together in the moonlight. Skin to skin.