Download this LitChart! (PDF)
Teachers and parents! Struggling with distance learning? Our Teacher Edition on The Godfather can help.

Welcome to the LitCharts study guide on Mario Puzo's The Godfather. Created by the original team behind SparkNotes, LitCharts are the world's best literature guides.

A concise biography of Mario Puzo plus historical and literary context for The Godfather.

A quick-reference summary: The Godfather on a single page.

In-depth summary and analysis of every chapter of The Godfather. Visual theme-tracking, too.

Explanations, analysis, and visualizations of The Godfather's themes.

The Godfather's important quotes, sortable by theme, character, or chapter.

Description, analysis, and timelines for The Godfather's characters.

Explanations of The Godfather's symbols, and tracking of where they appear.

An interactive data visualization of The Godfather's plot and themes.

Mario Puzo was one of twelve children born to Neapolitan parents who emigrated from Italy to New York. He grew up in Hell’s Kitchen, a tough neighborhood on Manhattan’s West Side with a large population of Italian and Irish immigrants. Puzo’s father abandoned the family when Mario was twelve years old, leaving his strong-willed mother to raise the family on her own. During World War II, Puzo served in the army but saw no combat due to his poor eyesight. After the war, he returned to New York and pursued a writing career. He wrote articles for men’s magazines such as Swank and Male and published two novels: The Dark Arena (1955) and The Fortunate Pilgrim (1965). Both novels received critical praise but met with poor sales. By the late 1960s, Puzo was a father of five in deep financial debt, so he purposely tried to write a hit novel. The result was 1969’s The Godfather, a bestselling tale of life in an Italian-American Mafia family that became a cultural phenomenon and inspired an Academy Award-winning movie trilogy from director Francis Ford Coppola. Puzo wrote several more novels and screenplays throughout the 1970s, 80s, and 90s before he died of heart failure in 1999. His last work, another Mafia epic called Omerta, was published posthumously in 2000.
Get the entire The Godfather LitChart as a printable PDF.
"My students can't get enough of your charts and their results have gone through the roof." -Graham S.
Download 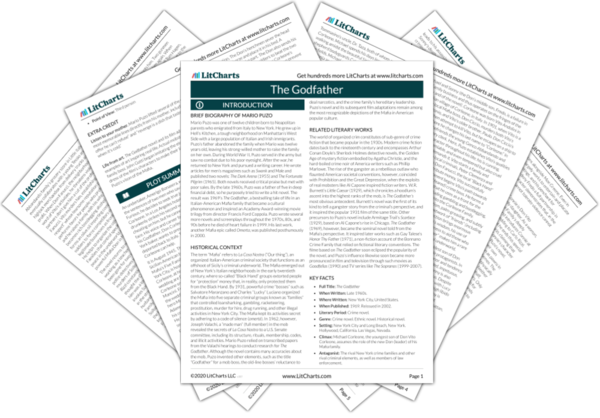 Historical Context of The Godfather

The term “Mafia” refers to La Cosa Nostra (“Our thing”), an organized Italian-American criminal society that functions as an offshoot of Sicily’s criminal underworld. The Mafia emerged out of New York’s Italian neighborhoods in the early twentieth century, where so-called “Black Hand” groups extorted people for “protection” money that, in reality, only protected them from the Black Hand. By 1931, powerful crime “bosses” such as Salvatore Maranzano and Charles “Lucky” Luciano organized the Mafia into five separate criminal groups known as “families” that controlled loansharking, gambling, racketeering, prostitution, murder for hire, drug running, and other illegal activities in New York City. The Mafia kept its activities secret by adhering to a code of silence (omertà). In 1962, however, Joseph Valachi, a “made man” (full member) in the mob revealed the secrets of La Cosa Nostra to a U.S. Senate committee, including its structure, rituals, membership, codes, and illicit activities. Mario Puzo relied on transcribed papers from the Valachi hearings to conduct research for The Godfather. Although the novel contains many accuracies about the mob, Puzo invented other elements, such as the title “Godfather” for a mob boss, the old-line bosses’ reluctance to deal narcotics, and the crime family’s hereditary leadership. Puzo’s novel and its subsequent film adaptations remain among the most recognizable depictions of the Mafia in American popular culture.

Other Books Related to The Godfather

The world of organized crim constitutes of sub-genre of crime fiction that became popular in the 1930s. Modern crime fiction dates back to the nineteenth century and encompasses Arthur Conan Doyle’s Sherlock Holmes detective novels, the Golden Age of mystery fiction embodied by Agatha Christie, and the hard-boiled crime noir of America writers such as Phillip Marlowe. The rise of the gangster as a rebellious outlaw who flaunted American societal conventions, however, coincided with Prohibition and the Great Depression, when the exploits of real mobsters like Al Capone inspired fiction writers. W.R. Burnett’s Little Caesar (1929), which chronicles a hoodlum’s ascent into the highest ranks of the mob, is The Godfather’s most obvious antecedent. Burnett’s novel was the first of its kind to tell a gangster story from the criminal’s perspective, and it inspired the popular 1931 film of the same title. Other precursors to Puzo’s novel include Armitage Trail’s Scarface (1929), based on Al Capone’s rise in Chicago. The Godfather (1969), however, became the seminal novel told from the Mafia’s perspective. It inspired later works such as Gay Talese’s Honor Thy Father (1971), a non-fiction account of the Bonnano Crime Family that relied on fictional literary conventions. The filme based on The Godfather soon eclipsed the popularity of the novel, and Puzo’s influence likewise soon became more pronounced in film and television through such movies as Goodfellas (1990) and TV series like The Sopranos (1999-2007).
Key Facts about The Godfather

Extra Credit for The Godfather

Listen to your mother. Mario Puzo lifted several of the novel’s most memorable lines directly from his mother, including “an offer he can’t refuse” and “revenge is a dish that tastes best when it’s cold.”

Life from art. The Godfather novel and its film adaptation are examples of art inspiring real life. Actual mobsters like Gambino family boss John Gotti began imitating the eloquent speech and dress of the film’s characters to make their lifestyle match Puzo’s vison of the Mafia. 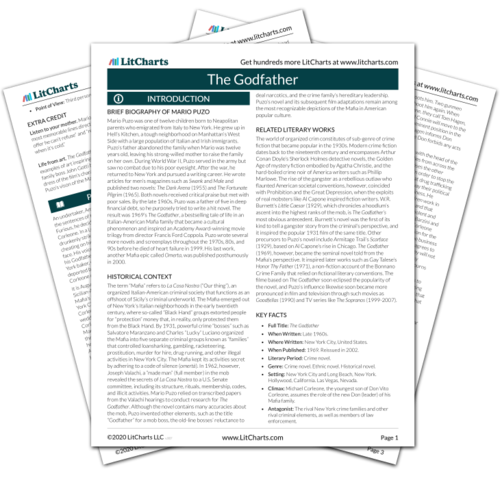 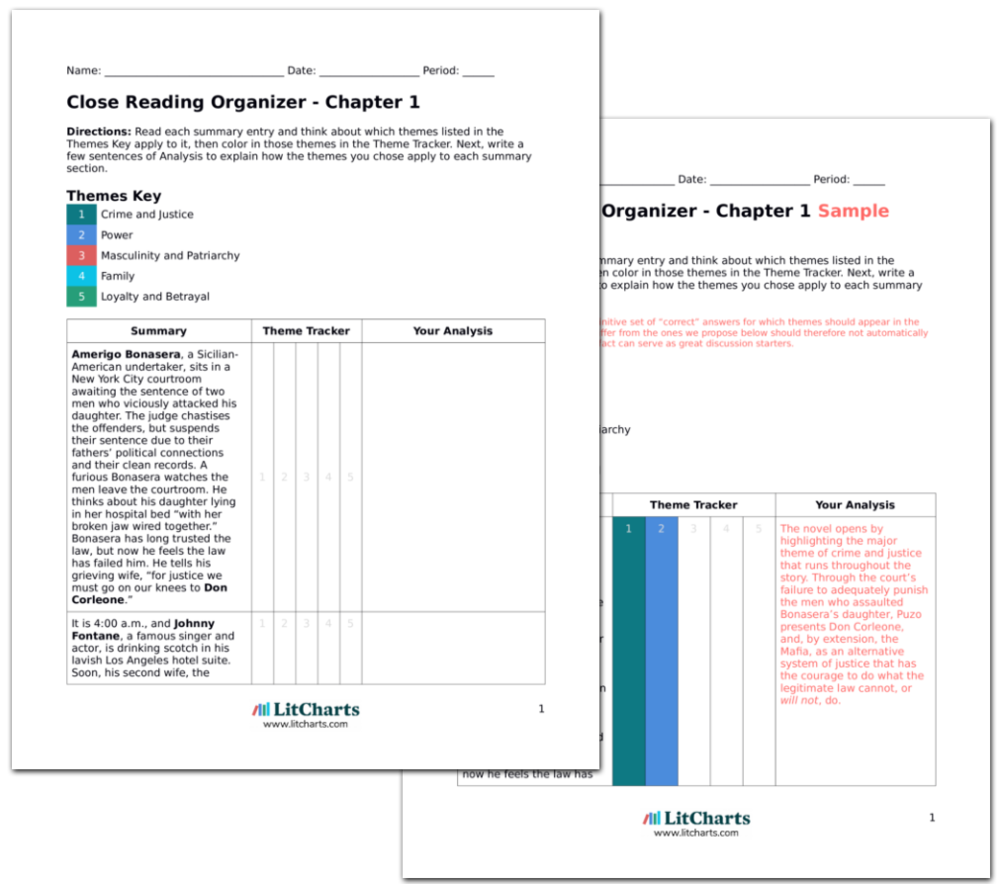