Download this LitChart! (PDF)
Teachers and parents! Struggling with distance learning? Our Teacher Edition on The Golden Compass can help.

Welcome to the LitCharts study guide on Philip Pullman's The Golden Compass. Created by the original team behind SparkNotes, LitCharts are the world's best literature guides.

A concise biography of Philip Pullman plus historical and literary context for The Golden Compass.

A quick-reference summary: The Golden Compass on a single page.

In-depth summary and analysis of every chapter of The Golden Compass. Visual theme-tracking, too.

Explanations, analysis, and visualizations of The Golden Compass's themes.

Description, analysis, and timelines for The Golden Compass's characters.

Description, analysis, and timelines for The Golden Compass's terms.

Explanations of The Golden Compass's symbols, and tracking of where they appear.

An interactive data visualization of The Golden Compass's plot and themes.

Philip Pullman's father was a Royal Air Force pilot and when the family wasn't traveling for his job, they spent most of their time in North Wales. His father died when Pullman was seven and his mother remarried. Pullman discovered John Milton's Paradise Lost as a teenager and was later drawn to the illustrations of William Blake. Both would go on to be major influences in Pullman's later work, His Dark Materials especially. Beginning in the late 1960s, Pullman taught middle-grade students and wrote children's plays. These plays inspired his first children's book, Count Karlstein. He began writing His Dark Materials in 1993 while teaching at Oxford and after it was published, Pullman turned to writing full time. The entire series has won numerous awards—particularly The Golden Compass and The Amber Spyglass. Throughout his life, Pullman has been an advocate for not age- and gender-labeling children's books, and he's spoken out on behalf of authors' rights to fair compensation for speaking engagements and e-book library loans. As an agnostic and critic of Christianity, Pullman has delighted in the criticism lobbed at His Dark Materials and even asked his publisher to include a critical quote from 1999 in The Amber Spyglass.
Get the entire The Golden Compass LitChart as a printable PDF.
"My students can't get enough of your charts and their results have gone through the roof." -Graham S.
Download 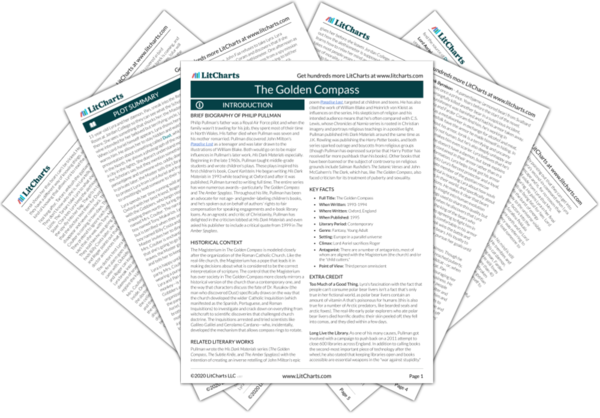 Historical Context of The Golden Compass

The Magisterium in The Golden Compass is modeled closely after the organization of the Roman Catholic Church. Like the real-life church, the Magisterium has a pope that leads it in making decisions about what is considered to be the correct interpretation of scripture. The control that the Magisterium has over society in The Golden Compass more closely mirrors a historical version of the church than a contemporary one, and the way that characters discuss the fate of Dr. Rusakov (the man who discovered Dust) specifically draws on the way that the church developed the wider Catholic Inquisition (which manifested as the Spanish, Portuguese, and Roman Inquisitions) to investigate and crack down on everything from witchcraft to scientific discoveries that challenged church doctrine. The Inquisitions arrested and tried scientists like Galileo Galilei and Gerolamo Cardano—who, incidentally, developed the mechanism that allows compass rings to rotate.

Other Books Related to The Golden Compass

Pullman wrote the His Dark Materials series (The Golden Compass, The Subtle Knife, and The Amber Spyglass) with the intention of creating an inverse retelling of John Milton's epic poem Paradise Lost, targeted at children and teens. He has also cited the work of William Blake and Heinrich von Kleist as influences on the series. His skepticism of religion and his intended audience means that he's often compared with C.S. Lewis, whose Chronicles of Narnia series is rooted in Christian imagery and portrays religious teachings in a positive light. Pullman published His Dark Materials around the same time as J.K. Rowling was publishing the Harry Potter books, and both series sparked outrage and boycotts from religious groups (though Pullman has expressed surprise that Harry Potter has received far more pushback than his books). Other books that have been banned or the subject of controversy on religious grounds include Salman Rushdie's The Satanic Verses and John McGahern's The Dark, which has, like The Golden Compass, also faced criticism for its treatment of puberty and sexuality.
Key Facts about The Golden Compass

Extra Credit for The Golden Compass

Too Much of a Good Thing. Lyra's fascination with the fact that people can't consume polar bear livers isn't a fact that's only true in her fictional world, as polar bear livers contain an amount of vitamin A that's poisonous for humans (this is also true for a number of Arctic predators, like bearded seals and arctic foxes). The real-life early polar explorers who ate polar bear livers died horrific deaths: their skin peeled off, they fell into comas, and they died within a few days.

Long Live the Library. As one of his many causes, Pullman got involved with a campaign to push back on a 2011 attempt to close 600 libraries across England. In addition to calling books the second-most important piece of technology after the wheel, he also stated that keeping libraries open and books accessible are essential weapons in the "war against stupidity." 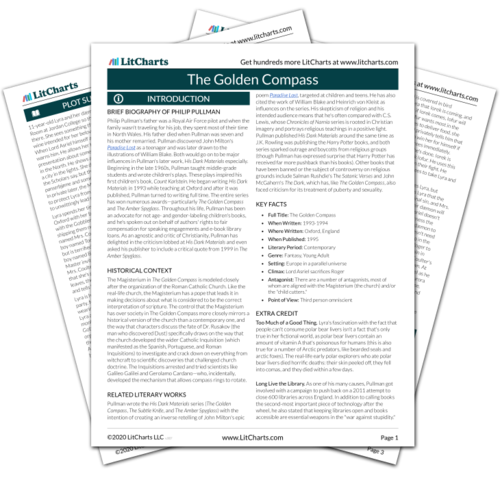 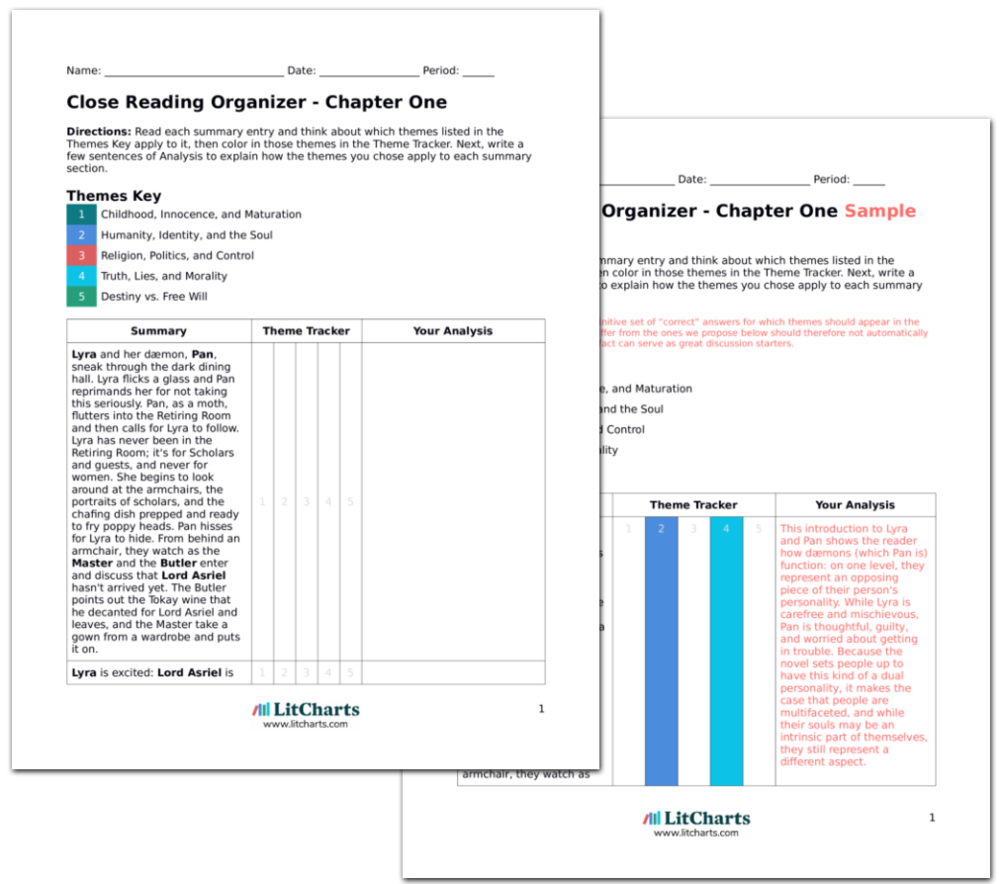