Download this LitChart! (PDF)
Teachers and parents! Struggling with distance learning? Our Teacher Edition on The Goldfinch can help.

Welcome to the LitCharts study guide on Donna Tartt's The Goldfinch. Created by the original team behind SparkNotes, LitCharts are the world's best literature guides.

A concise biography of Donna Tartt plus historical and literary context for The Goldfinch.

A quick-reference summary: The Goldfinch on a single page.

In-depth summary and analysis of every chapter of The Goldfinch. Visual theme-tracking, too.

Explanations, analysis, and visualizations of The Goldfinch's themes.

The Goldfinch's important quotes, sortable by theme, character, or chapter.

Description, analysis, and timelines for The Goldfinch's characters.

Explanations of The Goldfinch's symbols, and tracking of where they appear.

An interactive data visualization of The Goldfinch's plot and themes.

Born and raised in Mississippi, Donna Tartt began her undergraduate studies at the University of Mississippi. She then transferred to Bennington College, an alternative liberal arts school in Vermont. At Bennington, she was part of a friendship group with intense literary and artistic aspirations, which included Bret Easton Ellis and Jonathan Lethem. There, Tartt began working on her first novel, The Secret History, which is set at a fictionalized version of Bennington. The Secret History was published to enormous acclaim, and Tartt instantly became a literary superstar. However, she remained reclusive, rarely giving interviews and revealing little about her life. She is also famous for writing slowly; her second novel, The Little Friend, was published ten years after her first, and her third novel, The Goldfinch, 12 years after that. In 2014, The Goldfinch won the Pulitzer Prize for Fiction. It was adapted into a movie, which was released in 2019.
Get the entire The Goldfinch LitChart as a printable PDF.
"My students can't get enough of your charts and their results have gone through the roof." -Graham S.
Download 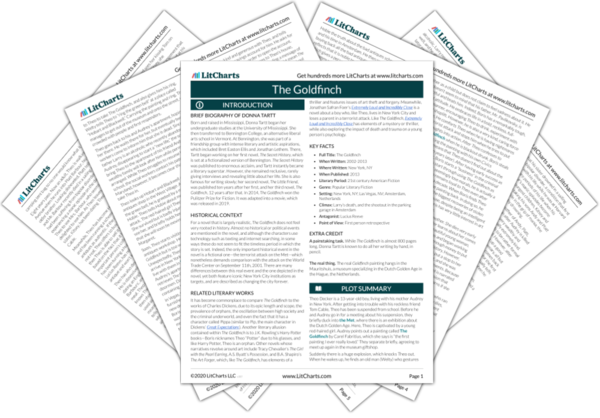 Historical Context of The Goldfinch

For a novel that is largely realistic, The Goldfinch does not feel very rooted in history. Almost no historical or political events are mentioned in the novel, and although the characters use technology such as texting and internet searching, in some ways these do not seem to fit the timeless period in which the story is set. Indeed, the only important historical event in the novel is a fictional one—the terrorist attack on the Met—which nonetheless demands comparison with the attack on the World Trade Center on September 11th, 2001. There are many differences between this real event and the one depicted in the novel, yet both feature iconic New York City institutions as targets, and are described as changing the city forever.

Other Books Related to The Goldfinch

It has become commonplace to compare The Goldfinch to the works of Charles Dickens, due to its epic length and scope, the prevalence of orphans, the oscillation between high society and the criminal underworld, and even the fact that it has a character called Pippa (similar to Pip, the main character in Dickens’ Great Expectations). Another literary allusion contained within The Goldfinch is to J.K. Rowling’s Harry Potter books—Boris nicknames Theo “Potter” due to his glasses, and like Harry Potter, Theo is an orphan. Other novels whose narratives revolve around art include Tracy Chevalier’s The Girl with the Pearl Earring, A.S. Byatt’s Possession, and B.A. Shapiro’s The Art Forger, which, like The Goldfinch, has elements of a thriller and features issues of art theft and forgery. Meanwhile, Jonathan Safran Foer’s Extremely Loud and Incredibly Close is a novel about a boy who, like Theo, lives in New York City and loses a parent in a terrorist attack. Like The Goldfinch, Extremely Loud and Incredibly Close has elements of a mystery or thriller, while also exploring the impact of death and trauma on a young person’s psychology.
Key Facts about The Goldfinch

Extra Credit for The Goldfinch

A painstaking task. While The Goldfinch is almost 800 pages long, Donna Tartt is known to do all her writing by hand, in pencil.

The real thing. The real Goldfinch painting hangs in the Mauritshuis, a museum specializing in the Dutch Golden Age in the Hague, the Netherlands. 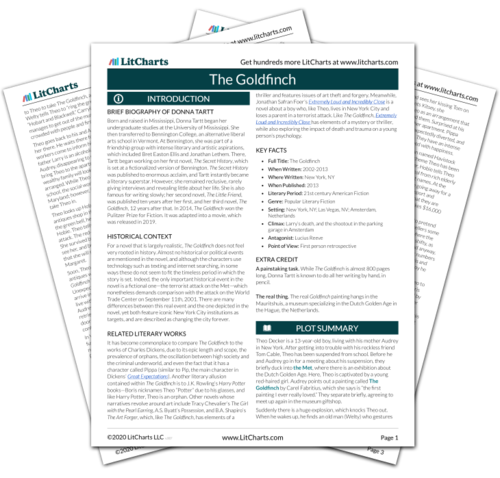 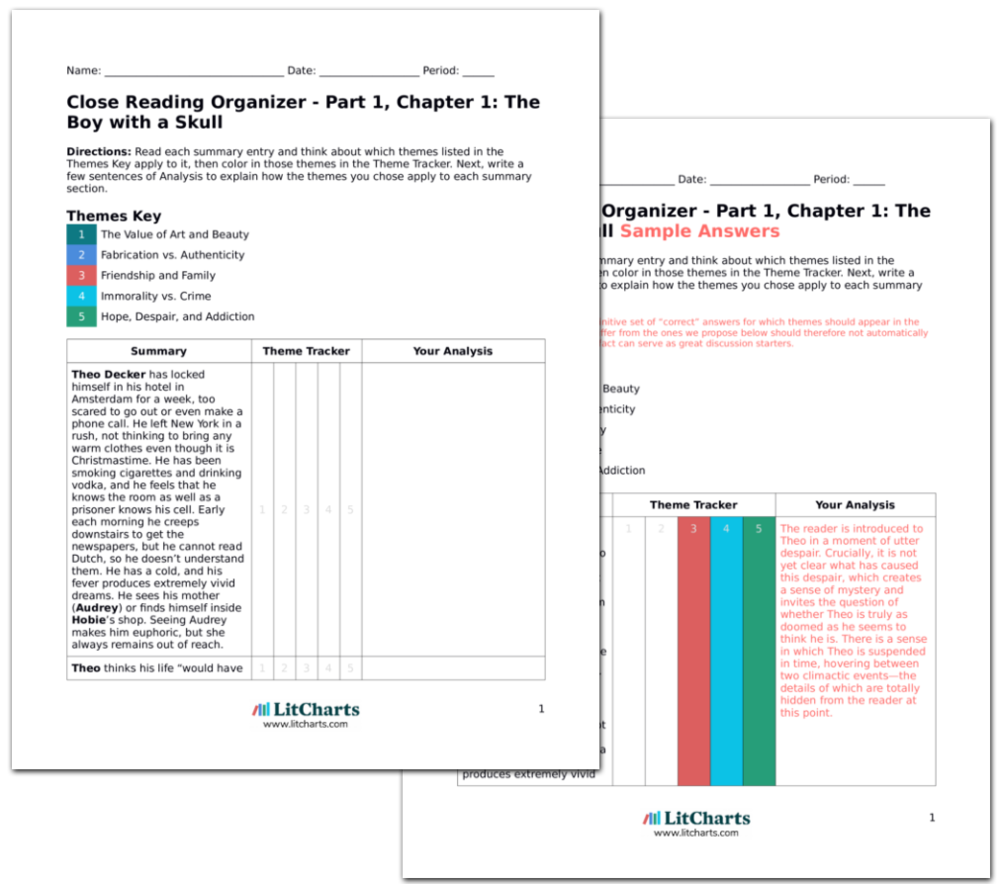