Download this LitChart! (PDF)
Teachers and parents! Struggling with distance learning? Our Teacher Edition on The Good Woman of Setzuan can help.

Welcome to the LitCharts study guide on Bertolt Brecht's The Good Woman of Setzuan. Created by the original team behind SparkNotes, LitCharts are the world's best literature guides.

The Good Woman of Setzuan: Introduction

A concise biography of Bertolt Brecht plus historical and literary context for The Good Woman of Setzuan.

A quick-reference summary: The Good Woman of Setzuan on a single page.

In-depth summary and analysis of every scene of The Good Woman of Setzuan. Visual theme-tracking, too.

The Good Woman of Setzuan: Themes

Explanations, analysis, and visualizations of The Good Woman of Setzuan's themes.

The Good Woman of Setzuan: Quotes

The Good Woman of Setzuan's important quotes, sortable by theme, character, or scene.

The Good Woman of Setzuan: Characters

Description, analysis, and timelines for The Good Woman of Setzuan's characters.

The Good Woman of Setzuan: Symbols

Explanations of The Good Woman of Setzuan's symbols, and tracking of where they appear.

An interactive data visualization of The Good Woman of Setzuan's plot and themes.

Born into a middle-class family in Bavaria at the turn of the 20th century, Bertolt Brecht enjoyed a comfortable childhood—though later in life, he claimed to have roots in the peasant class. At the onset of World War I, Brecht avoided conscription into the German Army by enrolling in medical school. His interests soon turned to drama, and in 1918 he wrote his first full-length play, Baal, a drama about a degenerate young poet. In the early 1920s, Brecht moved to Munich, where he continued writing plays and he found himself hailed by critics as a harbinger of a new era in the theater. As Brecht’s star rose, his first marriage began to deteriorate; he sought the company of his lovers Elisabeth Hauptmann and Helene Weigel in Berlin, where he formed theatrical connections and built artistic collectives in the thriving cultural center. Brecht and his collaborators sought new methods of theater-making which pointed out the hypocrisy of capitalism and the absurdity of art as escapism. The Threepenny Opera premiered in 1928, becoming a verified hit in Berlin and the impetus for a new experimental era in musicals worldwide. In 1933, when Hitler assumed power, Brecht fled Nazi Germany for Denmark and he spent the subsequent years moving throughout Scandinavia as the Nazis occupied country after country, eventually fleeing to Los Angeles. Despite the tumult of the period, Brecht produced many of his most famous anti-fascist work during it: Life of Galileo, Mother Courage and her Children, and The Caucasian Chalk Circle are hailed today as emblematic of German Exilliteratur, or “literature of the exiled.” In the late 1940s, as the Red Scare took hold of America, Brecht found himself blacklisted by Hollywood and on trial for communist sympathies (though an ideological Marxist, Brecht was never a member of the Communist Party). His testimony before the House Un-American Activities Committee was controversial, and Brecht returned to Europe the day after testifying. Back in East Berlin in 1949, Brecht established the famous Berliner Ensemble, but his own individual artistic output slowed. Ongoing political strife in East Berlin distressed and disillusioned Brecht, and in 1956 he died of heart failure. Brecht’s artistic contributions to drama remain influential to this day, and the epic theater movement’s reverberations can be felt throughout contemporary theater, film, and opera.
Get the entire The Good Woman of Setzuan LitChart as a printable PDF.
"My students can't get enough of your charts and their results have gone through the roof." -Graham S.
Download 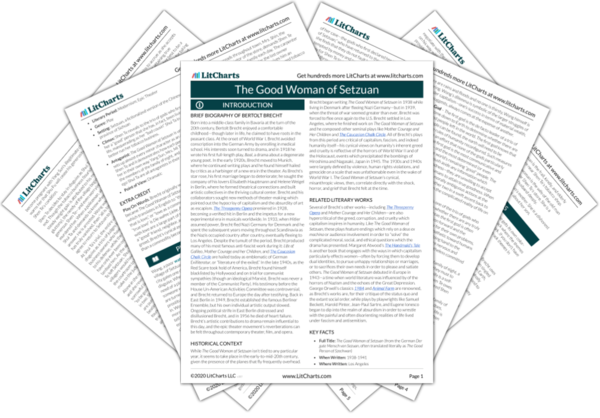 Historical Context of The Good Woman of Setzuan

While The Good Woman of Setzuan isn’t tied to any particular year, it seems to take place in the early-to-mid-20th century, given the presence of the planes that fly frequently overhead. Brecht began writing The Good Woman of Setzuan in 1938 while living in Denmark after fleeing Nazi Germany—but in 1939, when the threat of war seemed greater than ever, Brecht was forced to flee once again to the U.S. Brecht settled in Los Angeles, where he finished work on The Good Woman of Setzuan and he composed other seminal plays like Mother Courage and Her Children and The Caucasian Chalk Circle. All of Brecht’s plays from this period are critical of capitalism, fascism, and indeed humanity itself—his cynical views on humanity’s inherent greed and cruelty is reflective of the horrors of World War II and of the Holocaust, events which precipitated the bombings of Hiroshima and Nagasaki, Japan in 1945. The 1930s and 1940s were largely defined by violence, human rights violations, and genocide on a scale that was unfathomable even in the wake of World War I. The Good Woman of Setzuan’s cynical, misanthropic views, then, correlate directly with the shock, horror, and grief that Brecht felt at the time.

Other Books Related to The Good Woman of Setzuan

Several of Brecht’s other works—including The Threepenny Opera and Mother Courage and Her Children—are also hypercritical of the greed, corruption, and cruelty which capitalism inspires in humanity. Like The Good Woman of Setzuan, these plays feature endings which rely on a deus ex machina or audience involvement in order to “solve” the complicated moral, social, and ethical questions which the drama has presented. Margaret Atwood’s The Handmaid’s Tale is another book that engages with the ways in which capitalism particularly effects women—often by forcing them to develop dual identities, to pursue unhappy relationships or marriages, or to sacrifices their own needs in order to please and satiate others. The Good Woman of Setzuan debuted in Europe in 1943—a time when world literature was influenced by of the horrors of Nazism and the echoes of the Great Depression. George Orwell’s classics 1984 and Animal Farm are renowned, as Brecht’s works are, for their critique of the status quo and the extant social order, while plays by playwrights like Samuel Beckett, Harold Pinter, Jean-Paul Sartre, and Eugene Ionesco began to dip into the realm of absurdism in order to wrestle with the painful and often disorienting realities of life lived under fascism and antisemitism.
Key Facts about The Good Woman of Setzuan

Extra Credit for The Good Woman of Setzuan

Play On Words. Brecht originally wanted to title the play that became The Good Woman of Setzuan as Die Ware Liebe, a phrase which translates in English to “the product love,” “the product that is love,” or “love as a commodity.” The German term for “true love” is Die wahre Liebe. Accordingly, Shen Te’s struggles with love are a large part of the play’s action. As she works to be a “good” friend, neighbor, and lover in the face of capitalism and greed, Brecht’s cynical assertion that love can never be more than a commodity becomes clear. 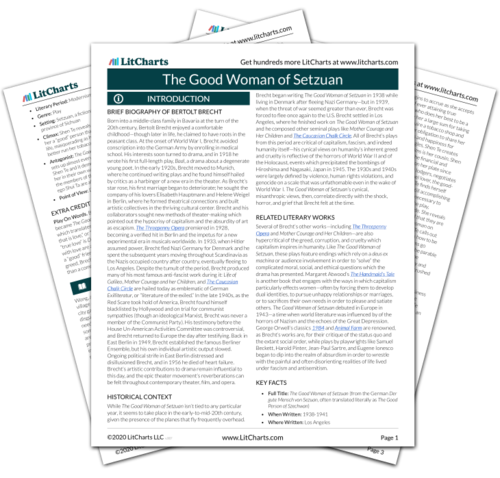 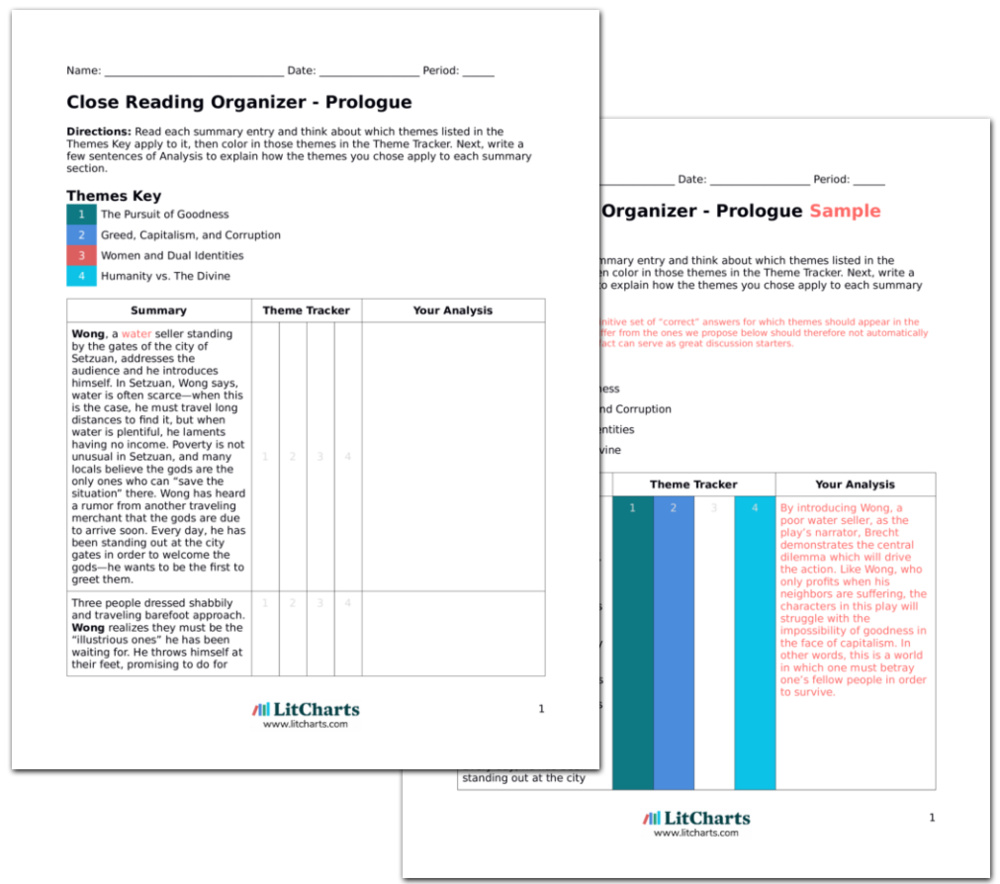