Download this LitChart! (PDF)
Teachers and parents! Struggling with distance learning? Our Teacher Edition on The Graveyard Book can help.

Welcome to the LitCharts study guide on Neil Gaiman's The Graveyard Book. Created by the original team behind SparkNotes, LitCharts are the world's best literature guides.

A concise biography of Neil Gaiman plus historical and literary context for The Graveyard Book.

A quick-reference summary: The Graveyard Book on a single page.

In-depth summary and analysis of every chapter of The Graveyard Book. Visual theme-tracking, too.

Explanations, analysis, and visualizations of The Graveyard Book's themes.

Description, analysis, and timelines for The Graveyard Book's characters.

Description, analysis, and timelines for The Graveyard Book's terms.

Explanations of The Graveyard Book's symbols, and tracking of where they appear.

An interactive data visualization of The Graveyard Book's plot and themes.

Neil Gaiman was born in Portchester, England, and was the oldest of three children. When he was five, the family moved to Sussex so that Gaiman’s parents could study Scientology, but their  religious affiliation caused some issues for Gaiman. For instance, one headmaster forced seven-year-old Gaiman to withdraw from school due to his father’s role as a public relations official for the local Scientologist center. Like Bod in The Graveyard Book, Gaiman was a prolific reader as a child, a habit that followed him into adulthood. He initially pursued a career in journalism, but he also published several short stories, a biography of the band Duran Duran, and a book of quotations. He began writing for comic books in the mid-1980s, and the comic book publisher DC Comics hired him to write for them in 1987. There, he wrote the Sandman comic series, which eventually became one of DC’s best selling titles and some of Gaiman’s most famous work. Gaiman’s novels, like the Sandman series, have received a lot of praise and a number of awards. In particular, The Graveyard Book won the 2008 Newbery Medal. In addition to writing novels and children’s picture books, Gaiman has also written for and worked in film and television; he’s appeared as himself in The Simpsons and has written episodes for Doctor Who. He has been married twice and has four children.
Get the entire The Graveyard Book LitChart as a printable PDF.
"My students can't get enough of your charts and their results have gone through the roof." -Graham S.
Download 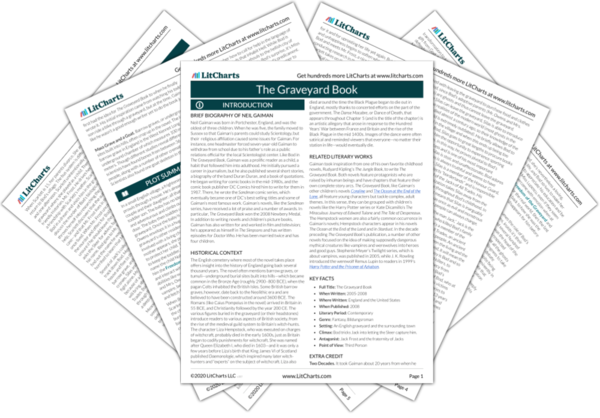 Historical Context of The Graveyard Book

The English cemetery where most of the novel takes place offers insight into the history of England going back several thousand years. The novel often mentions barrow graves, or tumuli—underground burial sites built into hills—which became common in the Bronze Age (roughly 2900–800 BCE), when the pagan Celts inhabited the British Isles. Some British barrow graves, however, date back to the Neolithic era and are believed to have been constructed around 3600 BCE. The Romans (like Caius Pompeius in the novel) arrived in Britain in 55 BCE, and Christianity followed by the year 200 CE. The various figures buried in the graveyard (or their headstones) introduce readers to various aspects of British society, from the rise of the medieval guild system to Britain’s witch-hunts. The character Liza Hempstock, who was executed on charges of witchcraft, probably died in the early 1600s, just as Britain began to codify punishments for witchcraft. She was named after Queen Elizabeth I, who died in 1603—and it was only a few years before Liza’s birth that King James VI of Scotland published Daemonologie, which inspired many later witch-hunters and “experts” on the subject of witchcraft. Liza also died around the time the Black Plague began to die out in England, mostly thanks to concerted efforts on the part of the government. The Danse Macabre, or Dance of Death, that appears throughout Chapter 5 (and is the title of the chapter) is an artistic allegory that arose in response to the Hundred Years’ War between France and Britain and the rise of the Black Plague in the mid 1400s. Images of the dance were often satirical and reminded viewers that everyone—no matter their station in life—would eventually die.

Other Books Related to The Graveyard Book

Gaiman took inspiration from one of his own favorite childhood novels, Rudyard Kipling’s The Jungle Book, to write The Graveyard Book. Both novels feature protagonists who are raised by inhuman beings and have chapters that feature their own complete story arcs. The Graveyard Book, like Gaiman’s other children’s novels Coraline and The Ocean at the End of the Lane, all feature young characters but tackle complex, adult themes. In this sense, they can be grouped with children’s novels like the Harry Potter series or Kate Dicamillo’s The Miraculous Journey of Edward Tulane and The Tale of Despereaux. The Hempstock women are also a fairly common occurrence in Gaiman’s novels; Hempstock characters appear in his novels The Ocean at the End of the Land and in Stardust. In the decade preceding The Graveyard Book’s publication, a number of other novels focused on the idea of making supposedly dangerous mythical creatures like vampires and werewolves into heroes and good guys. Stephenie Meyer’s Twilight series, which is about vampires, was published in 2005, while J. K. Rowling introduced the werewolf Remus Lupin to readers in 1999’s Harry Potter and the Prisoner of Azkaban.
Key Facts about The Graveyard Book

Extra Credit for The Graveyard Book

Two Decades. It took Gaiman about 20 years from when he first had the idea for The Graveyard Book to when he finally wrote it. His initial inspiration came from watching his toddler son ride a bike through a graveyard, but at the time, Gaiman felt like he wasn’t a good enough writer yet to do the book justice.

Mass Grave and a Goat. Barrow graves, or underground burial sites built into hills, often crop up in the novel. The largest barrow grave in England is the West Kennet Long Barrow, the underground chamber of which measures 100 meters by 20 meters. Though different studies reveal different results, scientists have found bones from between 36 and 43 different people, along with a number of other cremated remains. Scientists also found one goat skeleton in the barrow. 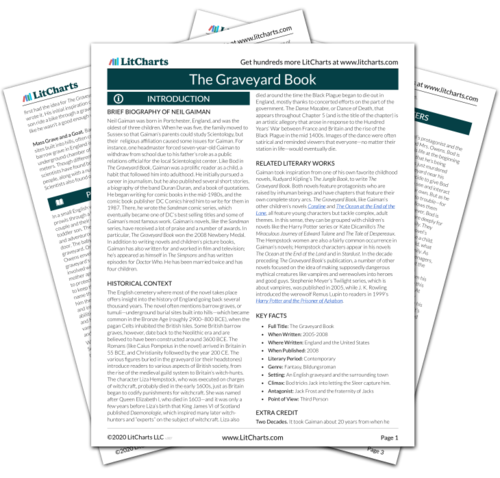 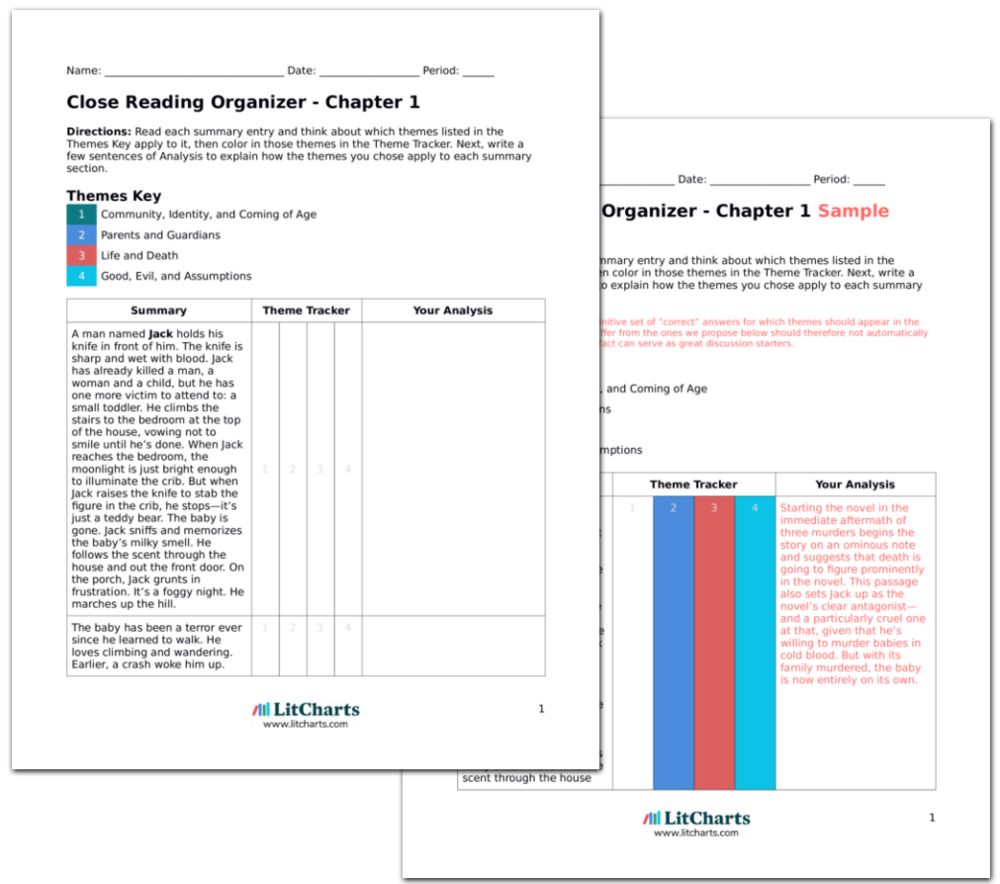