Download this LitChart! (PDF)
Teachers and parents! Struggling with distance learning? Our Teacher Edition on The Hairy Ape can help.

Get LitCharts A+
A stoker who tries to get Yank to see the nature of his own oppression under the rule of capitalism and industrialization. Long insists that the “Capitalist clarss” is to blame for the majority of the stokers’ problems, upholding that the people in the first cabin don’t care at all about the workers who are working as “wage slaves” to fuel the boat. Like Paddy, he challenges Yank’s unquestioning devotion to life as a stoker, though he uses a more political lens to do this. When Yank decides to leave the ocean liner to go looking for Mildred (to take his revenge), Long takes him to Fifth Avenue in New York City, hoping to impress upon his friend the class disparity plaguing their nation. To his credit, Long is only trying to urge Yank toward a point of political consciousness, but his attempt fails when it becomes clear that Yank is too preoccupied with his own vanity—his need to prove himself—to thoughtfully consider notions regarding the country’s socioeconomic divide. This is why Long winds up leaving Yank on the streets of Manhattan after seeing that his friend is only going to get them both into trouble.

Long Quotes in The Hairy Ape

The The Hairy Ape quotes below are all either spoken by Long or refer to Long. For each quote, you can also see the other characters and themes related to it (each theme is indicated by its own dot and icon, like this one:

). Note: all page numbers and citation info for the quotes below refer to the Vintage edition of The Hairy Ape published in 1995.
Scene One Quotes

The room is crowded with men, shouting, cursing, laughing, signing—a confused, inchoate uproar swelling into a sort of unity, a meaning—the bewildered, furious, baffled defiance of a beast in a cage. […]

The treatment of this scene, or of any other scene in the play, should by no means be naturalistic. The effect sought after is a cramped space in the bowels of a ship, imprisoned by white steel. The lines of bunks, the uprights supporting them, cross each other like the steel framework of a cage. The ceiling crushes down upon the men’s heads. They cannot stand upright. This accentuates the natural stooping posture which shoveling coal and the resultant over-development of back and shoulder muscles have given them. The men themselves should resemble those pictures in which the appearance of Neanderthal Man is guessed at. All are hairy-chested, with long arms of tremendous power, and low, receding brows above their small, fierce, resentful eyes.

This is ’ell. We lives in ’ell,—Comrades—and right enough we’ll die in it. (raging) And who’s ter blame, I arks yer? We ain’t. We wasn’t born this rotten way. All men is born free and ekal. That’s in the bleedin’ Bible, maties. But what d’they care for the Bible—them lazy, bloated swine what travels first cabin? Them’s the ones. They dragged us down ’til we’re on’y wage slaves in the bowels of a bloody ship, sweatin’, burnin’ up, eatin’ coal dust! Hit’s them’s ter blame—the damned Capitalist clarss!

Wanter know what I t’ink? Yuh ain’t no good for no one. Yuh’re de bunk. Yuh ain’t got no noive, get me? Yuh’re yellow, dat’s what. Yellow, dat’s you. Say! What’s dem slobs in de foist cabin got to do wit us? We’re better men dan dey are, ain’t we? Sure! One of us guys could clean up de whole mob wit one mit. Put one of ’em down here for one watch in de stokehole, what’d happen? Dey’d carry him off on a stretcher. Dem boids don’t amount to nothin’. Dey’re just baggage. Who makes dis old tub run? Ain’t it us guys? Well den, we belong, don’t we? We belong and dey don’t. Dat’s all. (A loud chorus of approval. Yank goes on.) As for dis bein’ hell—aw, nuts! Yuh lost your novie, dat’s what. Dis is a man’s job, get me? It belongs. It runs dis tub. No stiffs need apply. But yuh’re a stiff, see? Yuh’re yellow, dat’s you.

Hinsultin’ us, the bloody cow! And them bloody engineers! What right ’as they got to be exhibitin’ us ’s if we was bleedin’ monkeys in a menagerie? Did we sign for hinsults to our dignity as ’onest workers? Is that in the ship’s articles? You kin bloody well bet it ain’t! But I knows why they done it. I arsked a deck steward ’o she was and ’e told me. ’Er old man’s a bleedin’ millionaire, a bloody Capitalist! ’E’s got enuf bloody gold to sink this bleedin’ ship! ’E makes arf the bloody steel in the world! ’E owns this bloody boat! And you and me, Comrades, we’re ’is slaves! And the skipper and mates and engineers, they’re ’is slaves! And she’s ’is bloody daughter and we’re all ’er slaves, too! And she gives ’er orders as ’ow she wants to see the bloody animals below decks and down they takes ’er!

Here the adornments of extreme wealth are tantalizingly displayed. The jeweler’s window is gaudy with glittering diamonds, emeralds, rubies, pearls, etc., fashioned in ornate tiaras, crowns, necklaces, collars, etc. From each piece hangs an enormous tag from which a dollar sign and numerals in intermittent electric lights wink out the incredible prices. The same in the furrier’s. Rich furs of all varieties hang there bathed in a downpour of artificial light. The general effect is of a background of magnificence cheapened and made grotesque by commercialism, a background in tawdry disharmony with the clear light and sunshine on the street itself.

LONG—(as disgusted as he dares to be) Ain’t that why I brought yer up ’ere—to show yer? Yer been actin’ an’ talkin’ ’s if it was all a bleedin’ personal matter between yer and that bloody cow. I wants to convince yer she was on’y a representative of ’er clarss. I wants to awaken yer bloody clarss consciousness. Then yer’ll see it’s ’er clarss yer’ve got to fight, not ’er alone. There’s a ’ole mob of ’em like ’er, Gawd blind ’em!

YANK—(spitting on his hands—belligerently) De more de merrier when I gits started. Bring on de gang!

LONG—(excitedly) Church is out. ’Ere they come, the bleedin’ swine. (after a glance at Yank’s face—uneasily) Easy goes, Comrade. Keep yer bloomin’ temper. Remember force defeats itself. It ain’t our weapon. We must impress our demands through peaceful means—the votes of the on-marching proletarians of the bloody world!

Unlock with LitCharts A+
Get the entire The Hairy Ape LitChart as a printable PDF.
"My students can't get enough of your charts and their results have gone through the roof." -Graham S.
Download 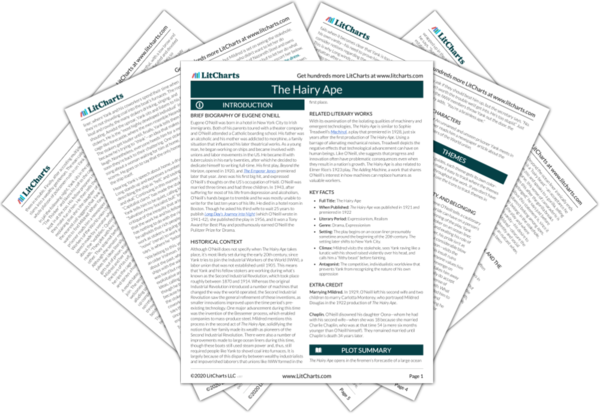 The timeline below shows where the character Long appears in The Hairy Ape. The colored dots and icons indicate which themes are associated with that appearance.

Agreeing with Yank’s idea of the ship as a home, a stoker named Long jumps up and drunkenly says, “Listen ’ere, Comrades! Yank ’ere is right. ’E says this... (full context)

Along with his fellow stokers, Yank tells Long to be quiet, saying that he’ll “knock” him down if he doesn’t shut up. “De... (full context)

...be havin’ a look at us?” This elicits howls of anger from the stokers, and Long jumps onto a bench and says. “Hinsultin’ us! Hinsultin’ us, the bloody cow! And them... (full context)

Inciting anger amongst his peers, Long says that he knows why Mildred came down to the stokehole. “I arsked a deck... (full context)

Long insists that he and his coworkers have rights as “voters and citizens,” but the stokers... (full context)

...as a kid, since his parents made him, though they never went themselves. He tells Long that his parents used to fight with one another quite frequently, getting drunk and tearing... (full context)

Yank grows impatient because he doesn’t see anyone who looks like Mildred, but Long tells him to wait. I don’t wait for no one,” Yank replies. “I keep on... (full context)

As Long and Yank wait for church to let out, they look into the windows of nearby... (full context)

...Yank is startled to find a monkey fur coat selling for $2,000. “It’s straight enuf,” Long assures him when he asks if the coat really costs that much. “They wouldn’t bloody... (full context) 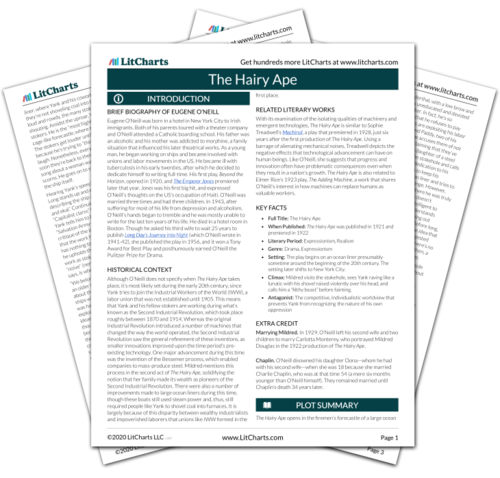 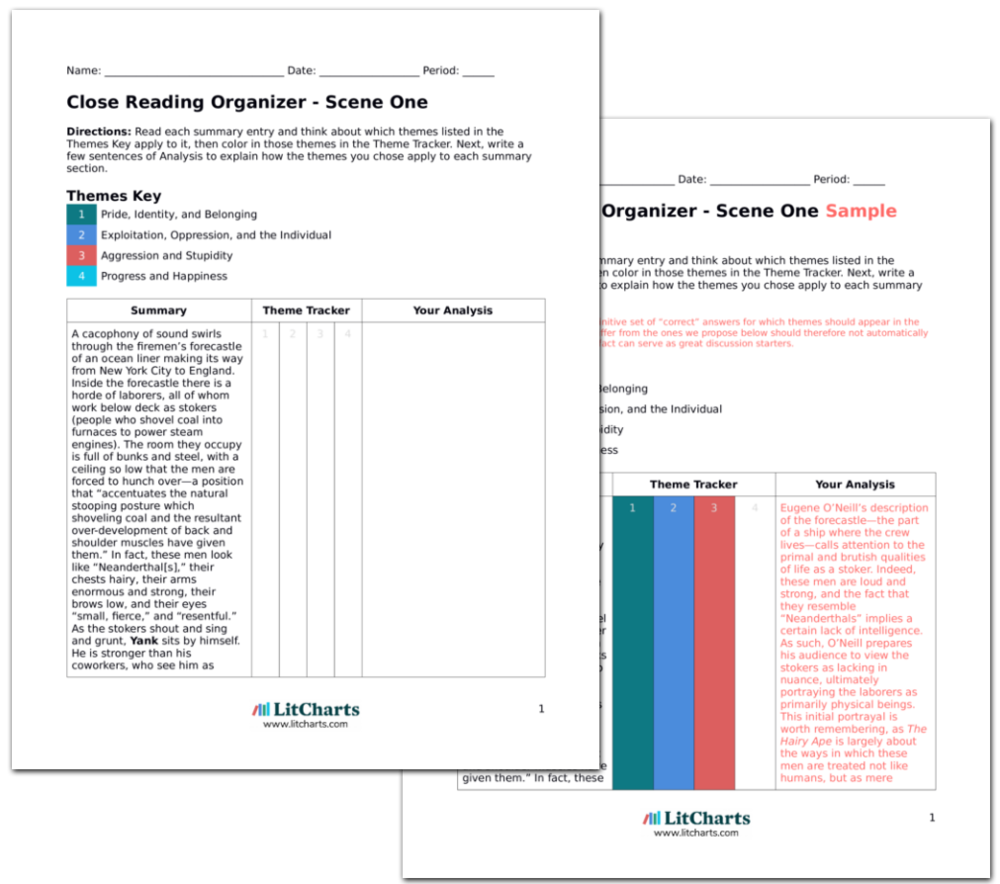