Download this LitChart! (PDF)
Teachers and parents! Struggling with distance learning? Our Teacher Edition on The Half-Skinned Steer can help.

Welcome to the LitCharts study guide on Annie Proulx's The Half-Skinned Steer. Created by the original team behind SparkNotes, LitCharts are the world's best literature guides.

A concise biography of Annie Proulx plus historical and literary context for The Half-Skinned Steer.

A quick-reference summary: The Half-Skinned Steer on a single page.

In-depth summary and analysis of every of The Half-Skinned Steer. Visual theme-tracking, too.

Explanations, analysis, and visualizations of The Half-Skinned Steer's themes.

The Half-Skinned Steer's important quotes, sortable by theme, character, or .

Description, analysis, and timelines for The Half-Skinned Steer's characters.

Explanations of The Half-Skinned Steer's symbols, and tracking of where they appear.

An interactive data visualization of The Half-Skinned Steer's plot and themes.

Edna Anne Proulx, often referred to as Annie Proulx, grew up as one of five sisters in various states around America. She graduated high school in Maine and enrolled at Colby College, but dropped out two years later to marry her first of three husbands. She returned to college in 1963 to get her bachelor’s degree in history at the University of Vermont, and then went on to get a master’s degree from Sir George Williams University (now known as Concordia University) in Canada. Proulx eventually moved to Vermont and became a writer and journalist, writing various articles for Gray's Sporting Journal, an outdoorsman magazine, and nonfiction titles such as dairy and hard cider cookbooks. She also founded a small-town newspaper in Vermont called The Vershire Behind the Times. In 1988, she published a collection of short stories, Heart Songs, and Other Stories, and in 1992, published her first novel, Postcards, which won the PEN/Faulkner Award for Fiction. Her next novel, The Shipping News (1993) won the Pulitzer Prize and the National Book Award. She moved to Wyoming in 1994, and then published another novel, titled Accordion Crimes in 1996. She thereafter produced another short story collection, Close Range: Wyoming Stories, in 1999. Close Range features the O. Henry Award-winning story “Brokeback Mountain.”
Get the entire The Half-Skinned Steer LitChart as a printable PDF.
"My students can't get enough of your charts and their results have gone through the roof." -Graham S.
Download 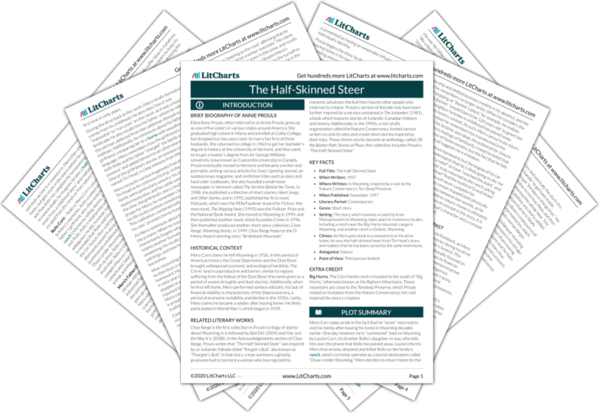 Historical Context of The Half-Skinned Steer

Mero Corn claims he left Wyoming in 1936. In this period of American history, the Great Depression and the Dust Bowl brought widespread economic and ecological hardship. The Corns’ land is unproductive and barren, similar to regions suffering from the fallout of the Dust Bowl (the name given to a period of severe droughts and dust storms). Additionally, when he first left home, Mero performed various odd jobs; his lack of financial stability is characteristic of the Depression era, a period of economic instability and decline in the 1930s. Lastly, Mero claims he became a soldier after leaving home. He likely participated in World War II, which began in 1939.

Other Books Related to The Half-Skinned Steer

Close Range is the first collection in Proulx’s trilogy of stories about Wyoming; it is followed by Bad Dirt (2004) and Fine Just the Way It Is (2008). In the Acknowledgements section of Close Range, Proulx writes that “The Half-Skinned Steer” was inspired by an Icelandic folktale titled “Porgeir’s Bull,” also known as “Thorgeir’s Bull.” In that story, a man summons a ghostly, gruesome bull to torment a woman who has rejected his romantic advances; the bull then haunts other people who mistreat its creator. Proulx’s version of the tale may have been further inspired by a version contained in The Icelanders (1981), a book which features stories of Icelandic-Canadian folklore and history. Additionally, in the 1990s, a non-profit organization called the Nature Conservancy invited various writers to visit its sites and create short stories inspired by their trips. These shorts stories became an anthology called Off the Beaten Path: Stories of Place; this collection includes Proulx’s “The Half-Skinned Steer.”
Key Facts about The Half-Skinned Steer

Extra Credit for The Half-Skinned Steer

Big Horns. The Corn family ranch is located to the south of “Big Horns,” otherwise known as the Bighorn Mountains. These mountains are close to the Tensleep Preserve, which Proulx visited on invitation from the Nature Conservancy; her visit inspired the story’s creation. 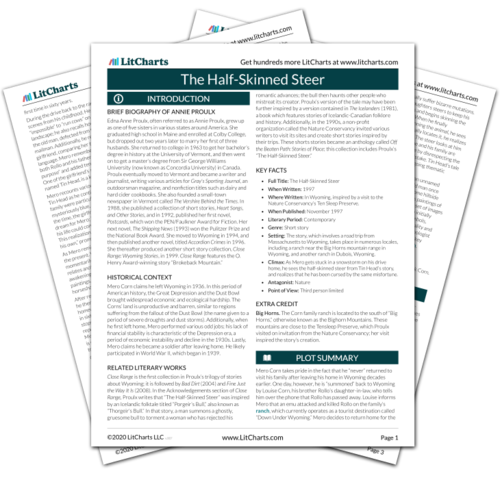 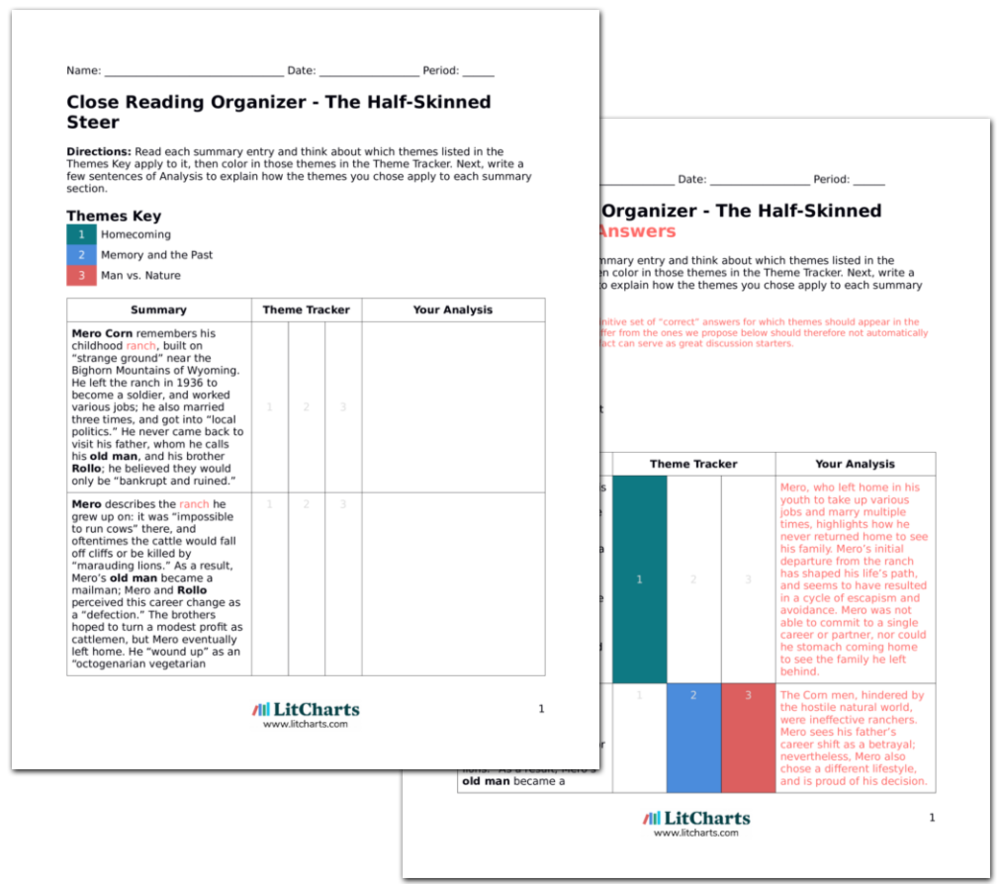